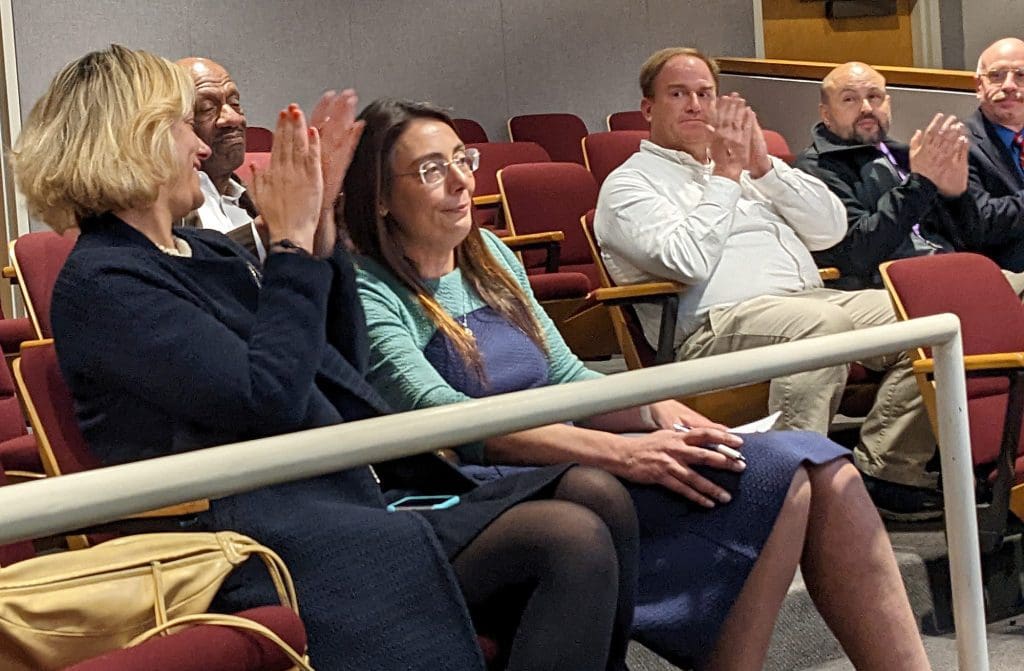 Eversource will double its standard supply rate Jan. 1, from 12.05 cents per kilowatt-hour (kWh) to 24.2 cents per kWh, resulting in an $84 per month increase for the average user, a news release said Thursday.

“This is a massive increase that will be unaffordable for many Connecticut families and businesses. We pay far too much for our energy in Connecticut as it is, and these winter rates are nothing short of punishing. My office has intervened on behalf of consumers at each and every rate case before the Public Utilities Regulatory Authority and the Federal Energy Regulatory Commission because we know how much the cost of energy impacts family budgets. We have next to no ability to challenge these supply rates, which is frustrating. Our supply rates always fluctuate between winter and summer, but this is not normal. We are seeing a huge global spike in gas costs due to the war in Ukraine and Russian manipulation of gas supplies. Both as a country and a state, we need to take a hard look at our energy sources and reduce our reliance on sources like natural gas that produce these wild, unaffordable surges in rates.” 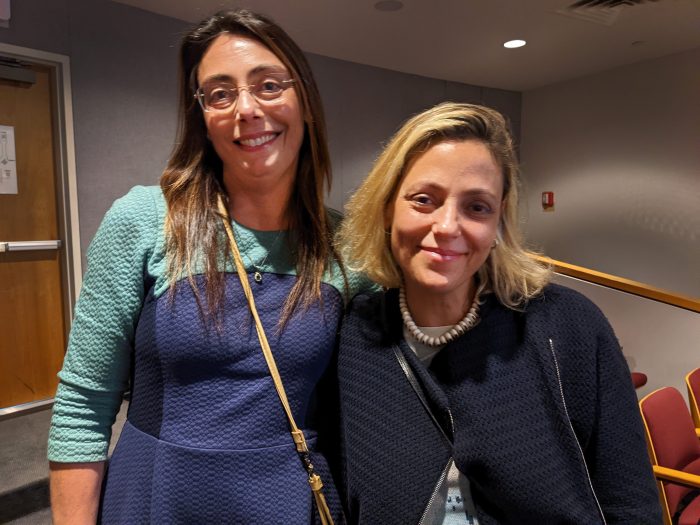 Chief of Operations and Public Works Vanessa Valadares and her sister, Carla Nobre, who happened to be visiting from Brazil, Nov. 8 in City Hall.

“She is always on top of things. She’s really respected by the people with whom we’re dealing. And it was certainly for me, not a question from the very beginning of that I would nominate her to be the new chief of operations,” Mayor Harry Rilling said.

Accolades followed. Council member Barbara Smyth (D-At Large) said Valadares has worked well with other Chiefs and brought everyone together as department interim director and took efficiency study recommendations to heart, moving the ideas forward. Council member Tom Livingston (D-District E) said Valadares “will always tell you the truth, no matter what it is, and work with you which extent she can see.”

Council member Darlene Young (D-District B) said it was amazing that Valadares is the first woman to fill the position, remarking that it took savvy to move forward in a male-dominated field.

“She is absolutely the first woman to lead the public works and as chief of operations,” Rilling said. “One thing we’re very proud of, if you look throughout the department heads, the Chiefs, the Council, we have become a women-led city. And we are on the right track to move this city forward, like never before.”

Valadares has been with the Norwalk Department of Public Works for more than 12 years, beginning as a junior engineer in 2010. She hails from Brazil.

“I will continue my commitment to delivering the best service to our residents, and strive to improve efficiency in all areas while focusing on new ways the city can enhance its operations and sustainability efforts,” she said. “As the leader of this department I will continue to embrace transparency, collaboration and new ideas, my door will always be open.”

Siegel, 90, moved to Easton in 2016 after his wife Linda died to live with his son, according to Easton’s master of ceremonies. Siegel served in the Korean War and was later tasked with providing security services during nuclear detonation testing in the South Pacific.

He volunteers for the Easton Veterans Service Office, helping veterans preserve their memories, it was said.

Siegel recounted the history of Veterans Day and said, “Millions of Americans have fought and died on battlefields here and abroad to defend our freedoms and way of life. Today, our troops continue to make the ultimate sacrifices. And even as we lose troops, more Americans step forward to say ‘I’m ready to serve.’”

“I wanted to support him after the loss of his wife, Linda, and his transitioning to another city/state. The love his sons have for him is incredible and I’m sure that made the transition of leaving life as he knew it,” Harris wrote. “I am happy that his service to our country was recognized in such a significant way.”

Norwalk Tomorrow has debuted a webpage devoted to trees, offering a link to the City’s tree ordinance and explaining efforts to nurture urban forestry in balance with growth and preservation.

“Allocating roadside space to street trees and landscaping helps improve the aesthetics of the streetscape, provides a buffer between the roadway and sidewalk to improve pedestrian comfort, and can facilitate stormwater management through bioretention features such as planters and swales,” Norwalk Tomorrow states.

“Tree canopy is important and serves communities in a number of ways, this can include environmental benefits to adding calmness and beautification,” said Norwalk Senior Planner Michelle Andrzejewski  in an email.

The new page is here.

Good timing with the elections over. The extra $1000 a year seems like a lot, but it will pale in comparison to the increases coming in every other aspect of the supply chain. To keep it under $1000 they need to shift even more to commercial customers who will have to raise prices. Meanwhile, China is building a new coal plant every week.

Regarding Tong’s Remarks:
Do all Dem officials have the same playbook?
1) PURA is run by officials appointed by Democrats..
2) Connecticut DEEP Head is Katie Dykes — She hates gas. Her husband was run out of Washington due to scandal. Again, appointed by Dem leadership. What can possibly go wrong?
3) THE U.S. is sitting on 100s of years worth of Natural Gas that can be used cleanly. A lot cleaner than Lefty Zealots would lead one to believe.
4) Hydro Power from Canada as a support?? — Not happening due to tree huggers in Maine. Maybe Mainers like the cold weather and high energy bills. I certainly don’t.
5) Wind Power will save the day !! — Wait, Turns out projects being built in New London and Bridgeport are now behind and over budget. In fact, there’s a scandal in New London. Bridgeport being Bridgeport, I’m sure there’s a scandal there as well, but we haven’t been told yet. AND, what our elected leaders in Hartford haven’t told us yet….WIND Power is 3-4 times MORE expensive than Natural Gas…Why haven’t they told us??
6) Tong is a smart guy, but he thinks we’re stupid. Kind of like the kid in the classroom we all disliked as kids.
7) So…In a nutshell, Electric is thru the roof, Heating Oil is $5-$6/gallon. Our schools are in disarray. Residential Property Taxes are about to jump. The “Fun” Money from DC is beginning to run out per our Mayor’s staff. BUT, don’t worry keep pulling that lever to the left and watch your bank account dry up.
8) Have a Nice Weekend. Looking forward to watching Notre Dame crushing little brother Boston College while drinking a number of cold Budweisers Saturday afternoon. While Tong & Co. think of new bullet points on deflecting blame for the mess they’re creating.

AG Tong is either a moron (which I don’t think he is), or complicit in decimating our nation’s energy infrastructure and businesses. As a member of the democratic party, he needed to ‘toe the line’ on all policy issues declared by the democratic party. This includes killing the fossil fuel industry, irrespective of the negative impacts on all of us.

Consider his comments. First, he claims he is fighting to protect you, then he blames his impedances on others and a system that is beyond his control. After which he doubles down on the policies that brought us to this situation in the first place. Question – is that contempt for us little people?

There was huge push back on the Biden Admins war on fossil fuels which was not well covered in the mainstream media. The concept was simple – if we can put a man on the moon, we can handle a transition to renewables in a fashion that does not undermine the wellbeing of the American public.

Lucky for us pretty much everything is still in place to revert to full spectrum energy dominance which we enjoyed right up to the Biden Admins takeover. Estimates it would take less than a year to get the US back on track to energy dominance. Perhaps then we can have a meaningful discussion on climate change and institute a plan to get there without ruining our way of life.

Sadly, that won’t happen as the powers in charge don’t want that. All Dem voters should give some consideration as to why that is.

Bottom line, the Dems have the power to right this wrong. Watch what they do, not what they say, or who they blame.

Tong: “I’m outraged about the Eversource price hike. I vow to do all I can to intervene on this issue!”

Also Tong: “There’s nothing I can do to intervene on this issue.”

The above comments are right on and anyone who voted for a Democrat should be ashamed of themselves because they literally are robbing the American people. Now can we impeach and lock people up Play these people who stole the election once again through lies deception and suppression of the truth and take back our country and our energy!?🥵👎🏽

From a former resident.

You voted to use “Green Power”, which does not exist. There are no wind generators or solar sources available to you with enough capacity to keep you warm and dry.

You voted to shut down the nuclear, coal and gas plants which provide reliable and inexpensive power.

You voted to use Canadian Hydro power, but the folks in Maine said no to building transmission lines through their state. That equals no additional power.

The Northeast, Penn. New York and Ct voted to not build additional Natural Gas Pipelines through their states so you could have inexpensive, reliable fuel to heat your homes, power your electric plants.

Then we read your costs are going up and your supply is going down.

Dave: Thanks for the education. Your comments paint a great picture of why we are where we are.
So, thank you.