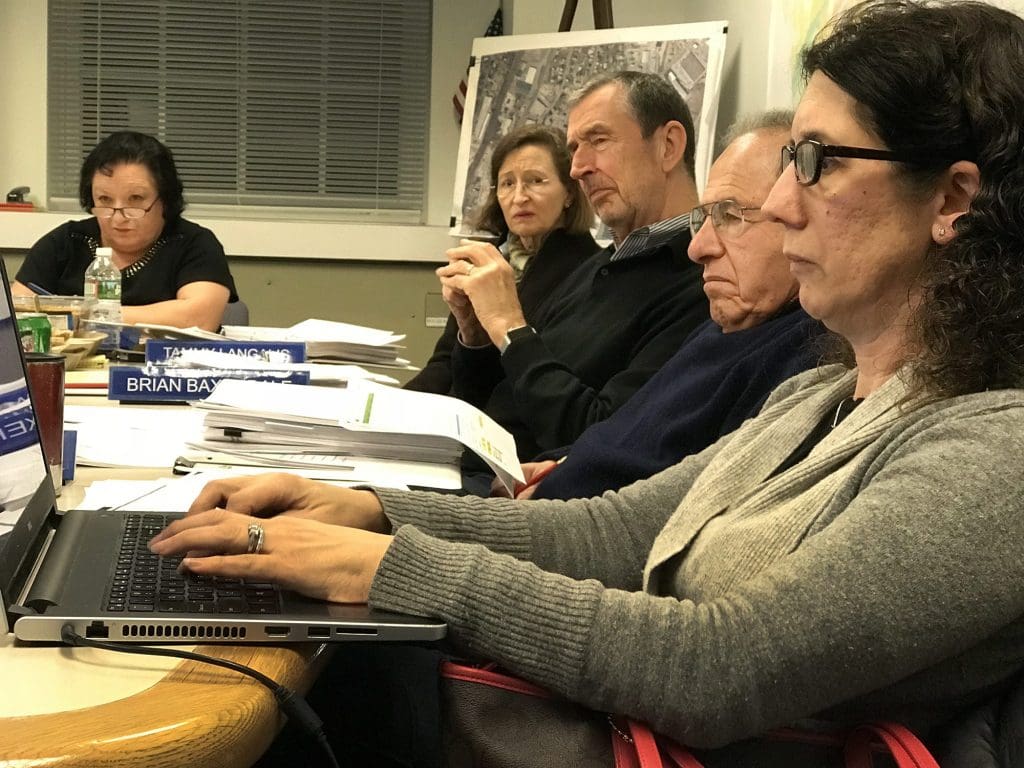 Mayor Harry Rilling revived the Commission on the Status of Women, a long-forgotten City body that’s been inactive for at least 25 years, in late September. Since then, there’s been one meeting.

Commission members elected Anna Keegan as their Chairwoman and Claudia Werman Connor as Vice Chairwoman in November. They also formed a bylaws committee. Since then, every meeting has been cancelled.

“The fact that the Commission has not yet met is just a case of bad timing,” Keegan said in an email. “In November we agreed to meet on the third Monday of the month as our regular time, and we will be meeting then, starting in March.  Appointed in November, we cancelled the December meeting due to the holidays. The January and February meetings conflicted with federal holidays (Martin Luther King Day and  President’s Day), both days on which City Hall is closed.  Everyone is eager and excited to get going with the work of the Commission, and we will have a full agenda in March. In the meantime, the bylaws sub-committee is meeting to keep the administrative side of things moving forward.”

Commission members decided in November to continue holding meetings on Zoom. Shannon O’Toole Giandurco commented that there was “housekeeping stuff to really get things together” and “bylaws are not the exciting part to dig into. But once we have them, you know, we can then go forward. So I would say definitely zoom for now.” It would take “the next couple months to really get going on” the bylaws.

In September, Rilling said the Commission will have “various tasks and responsibilities to explore the situation of women in Norwalk relative to equal opportunities, comparable worth and other kinds of things that we know that sometimes women are a little bit behind, and don’t have the same opportunities as others.”

The Commission on the Status of Women became part of the City’s code in 1987, under then-Mayor Bill Collins, but disbanded after participation wanned, a City news release said. It can have 11 members. Rilling appointed 10 women but said, “We’re looking for men who may be interested in serving as well.”

“Some things have recently popped up that need more of my time and attention and I could not dedicate the time to Planning and Zoning that it deserves.  It has been an honor to serve the Great City of Norwalk as a Planning Commissioner for 20 years.  If I may, I would like to thank Mayor Knopp for his trust in first appointing me. I did not know Mayor Knopp, I just expressed interest in serving on any board. Thank you to Mayor Moccia for his support and reappointments; and much appreciation and gratitude to Mayor Rilling for his reappointments to the Planning Commission and continued confidence in being named to the combined Planning and Zoning Commission.  I thank my past and present colleagues on the PC and past and present members of the Planning and Zoning staff.  Thank you to the Department Heads and staff – I have many fond memories of our many interactions.  It hasn’t always been easy and the hours have been long.  Capital budget reviews went to 2:00am.  For all the critics of Planning and Zoning, I urge you to serve or become a partner in the process and not just continuously attack and point out the flaws.  Challenge to do better; get involved in a positive way.  It has been an honor and a privilege to serve.
“I wish everyone well.”

DiMeglio did not attend any meetings of the new Planning and Zoning Commission.

The Council also accepted the resignation of Sheri McCready Brown from the Board of Estimate and Taxation, as she has been elected to the Board of Education.

“They were invaluable assets to the city of Norwalk and worked very hard and put in a lot of hours,” Rilling said.

Costanzo became NPS Chief of School Operations in September 2015 and later came under fire when he and the New Haven Board of Education were sued due to an allegation that he sexually harassed an employee. New Haven settled the lawsuit for $150,000 in early 2019.

In July, Estrella reassigned Costanzo to work at Norwalk High School, as part of a restructuring of Central Office. The recent agenda states that he was NHA Associate Education Administrator for SBIS.

He’s gone to work for Teach For America as the Senior Managing Director of Programs and Innovation for the region, Connecticut TFA states in a press release.

“An adjunct professor and graduate student coach at Columbia University’s Teachers College, Costanzo will oversee the entire participant journey from recruitment to incoming corps members, teachers in more than 10 different subjects from Pre-K through Grade 12 that join TFA, through the two-year corps member experience through alumni status,” the news release says.

In October, NancyOnNorwalk learned that Norwalk Director of Management and Budgets Angela Fogel had left the city. Details were not available.

Fogel’s resignation was effective Sept. 1, according to her resignation letter, provided by Director of Personnel and Labor Relations Ray Burney on Oct. 14.

“I have genuinely enjoyed my time with the city,” she wrote in the letter.

Fogel went to work as Associate Director of Finance & Administration for Yale University in January, according to her LinkedIn Page.

Fogel did not reply to an email from NancyOnNorwalk.

Kudos to Fran Dimeglio for all her hard work and dedication. My dad was on the zoning board for many years and I know it takes a lot of time away from family for the good of the city. She gave 110% always and will be missed. Good luck Fran.

Best of luck to former COO Mr. Costanzo – he was dead man walking ever since he exposed publicly the failures of the current administration to deal with illegal apartments – and the resulting impact on the schools. Here was the NoN coverage –

There is an important video clip at the end – I urge you to listen to it – this was January 2019, and the report covered the 2018-2019 school year (when Adamowski was Super). In particular – go to Frank’s presentation – start at the 51:00 mark – and just listen to the next TWO minutes. The upshot was – 153 kids added in that year – no more than 5 could be traced to new homeownership, with the vast majority in multi-family – many without a legal lease in place. Added student = added costs while living in a dwelling that delivers not one more cent of property tax.

As an aside – it was haunting to hear Mike Barbis speak again – but it was wonderful to see him confirm the mayor was present – and so – he could not pretend this was “news” to him.

This report was embarrassing to the mayor – and is IMHO – one of the reasons Frank has been pushed out. New Super surely doesn’t want any light on this subject, either. How many residency investigations have been done in the last year?

Fran DeMeglio is a true public servant who deserves thanks. Appointed by mayors from both parties, she worked for the betterment of Norwalk.

Michael Mushak reemerging is bad news. A bully on these pages as well as in real life. Sad to see.

I am so sorry to hear about Fran. Fran DiMeglio was a pleasure to serve with. She always tried to do right for the city of Norwalk and always brought the perspective of the average taxpayer to the table without political intent. She is a loss for the city. She and I started a little rocky but boy did I grow to really appreciate her, her wit, and her level head at many of the meetings. I consider her a friend now and Norwalk just lost a good board member. Thank you Fran for all the wonderful things you have done for Norwalk and for your friendship that resulted from serving together.

Fran DiMeglio will be missed dearly. She was grounded in experience and a lifetime spent watching change happen in Norwalk, and I agree with everything Nora King said about her.

Dave McCarthy’s comment is laughable, calling me a bully after all these years of his living in Florida far removed from Norwalk. Ouch! And this coming from the master of dirty political tricks and divisive tactics who would make Trump proud. It seems Florida deserves the likes of McCarthy and Trump.

Well let me try to guess, that perhaps from McCarthy’s perspective I truly was a bully for exposing his multiple violations of human decency and basic ethics over the years, in his compulsive zeal for petty political power that spared no one including his friends who he slowly lost as he burned bridges all over town (yes, we were once friends, charming at first until he tried to throw me under the bus like so many others. We all know who we are!)

These violations of decency included publicly accusing his upstanding political opponents John Igneri and Tom Livingston of “elder abuse” when an older gentleman (and one of his constituents) refused to display McCarthy’s lawn sign, which McCarthy’s ego was so insulted by he decided to turn it into a false claim of abuse by his opponents (whose signs the gentleman agreed to display). The well-documented episode was so bizarre it was laughable, yet also so sad and desperate that it cemented McCarthy’s reputation of having no boundaries of basic decency even among his own constituents. He went on to lose that election in a landslide loss, a loss he clearly deserved.

Or maybe McCarthy thinks I’m a bully for exposing his racist campaign flyer he distributed on porches all over Rowayton and West Norwalk a decade ago that called long-time Muslim residents of Norwalk a “threat to the sovereignty of Norwalk.”

It was so disgusting and shocking that even the Norwalk Republican Town Committee had to publicly distance itself from it, as McCarthy put their name in it without their permission. All documented here on the pages of NoN with verifiable evidence, so this is not bullying but just the truth.

When the good people of Norwalk on both sides of the aisle saw McCarthy’s true colors through accurate reporting on NoN, and through my so-called “bullying” by exposing his white supremacist nonsense for all to see, he left town for Florida with little sadness in our community. So call me a bully all you want Dave. Its so clearly a classic “projection”.

Some people can’t get enough of Trump. That and calling others racists. I’m surprised the DSM hasn’t come out with a diagnosis code.