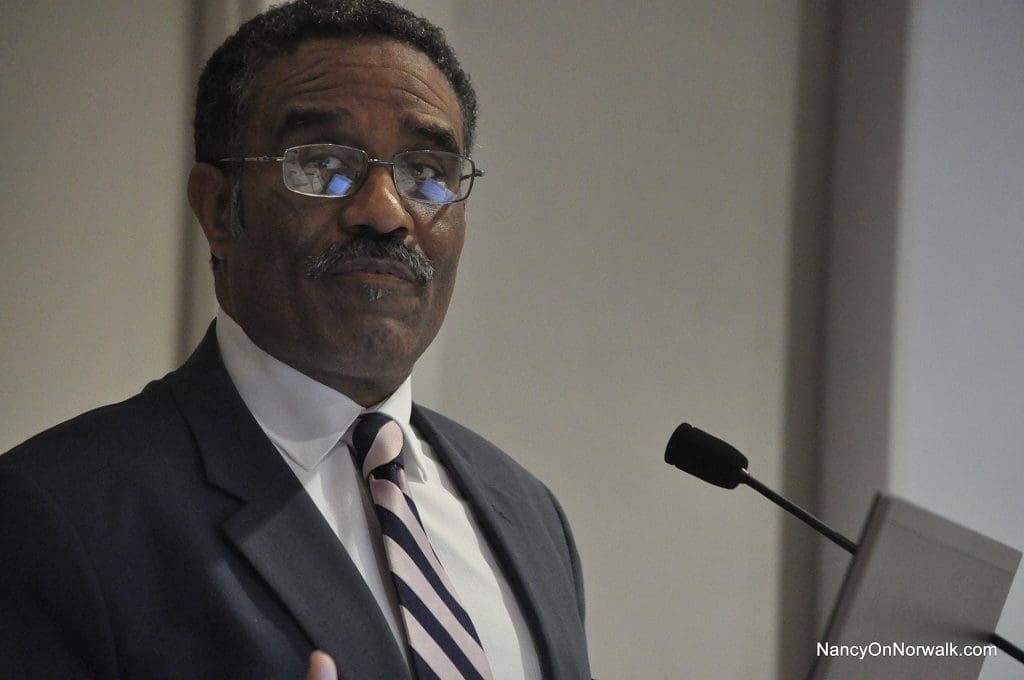 NORWALK, Conn. – Here’s what we have for you in political notes this Saturday:

Remember that impressive show that State Rep. Fred Wilms (R-142) and State Rep. Bruce Morris (D-140) made in trying to persuade the legislature’s Education Committee that their bill for reforming the Educational Cost Sharing (ECS) formula presents the best ideas?

It’s resulted in Morris being appointed to the Committee, Morris said Thursday.

“I am ecstatic,” Morris said, explaining that there was an opening on the Committee because Rep. Douglas McCrory (D-Hartford) won election to the State Senate in the Feb. 28 special election.

Speaker of the House Joe Aresimowicz (D-Berlin, Southington) asked him to fill the slot because everyone was impressed with the ECS testimony, and because Morris has 18 years of experience as a school district human relations officer, Morris said.

“I know Bruce will take the same passion that he has applied to education issues in his community of Norwalk to the legislature’s Education Committee, where he can apply his knowledge to help ensure every student in the state has access to a quality education,”  Aresimowicz is quoted as saying in a press release.

“I will have more of an impact to affect final decisions on what happens with ECS. That’s going to happen through that Committee,” Morris said to NancyOnNorwalk.

Wilms and Morris have proposed that ECS be rewritten to use District Reference Groups (DRGs), a recognized designation that categorizes school districts via a variety of measures, as a foundation for funding. The least stressed districts would get the least funding, but would be relieved of state mandates as their benefit in the new equation.

“No one can give anyone 100 percent of what they like. There’s got to be compromise,” Morris said. “That’s why the bill that Fred and I have (offers relief from mandates).… There is something in it for everyone and yet it meets the goals.”

State Rep. Gail Lavielle (R-143) has been on the 37-member Committee for years, and is a ranking member.

Citibank and POKO Partners have negotiated a deed-in-lieu of foreclosure deal on Wall Street Place, according to the packet for Tuesday’s Common Council meeting, which appears likely to be snowed out.

POKO was issued a Notice of Default on its construction loan for Wall Street Place, Redevelopment Agency Executive Director Tim Sheehan wrote in a March 8 letter to the Council, requesting a speedy vote on the process.

“The bank is eager to take title to the property as soon as possible  for several reasons, including its desire to get this project  back online,” Sheehan wrote. “To accommodate this the bank is seeking the consent of the Redevelopment Agency and the City to waive the 90 day written notice of its intent to accept a deed in lieu of foreclosure, which is required under the Amendment to the Loan Recognition Agreement. This notice provision was incorporated into the referenced document so that both the City and the Redevelopment Agency would not be surprised by any such action taken by the bank.  As the public parties were informed that the project was in foreclosure and that negotiations between the developer and the bank have been ongoing, there  is no surprise associated  with the bank’s intended resolution  of the  default.”

“Citibank is in negotiations with a developer. It’s their goal and the city’s to move this project forward as soon as possible,” Planning Committee Chairman John Kydes (D-District C) said in a Saturday email.

“The bank’s request has been reviewed by the City’s Office of Corporation Counsel which has indicated that the request should be brought forward to the Common Council to authorize the Mayor to consent to waiving the notice requirement  on behalf  of the   City,” Sheehan wrote.

The loan was for nearly $31.9 million, according to a letter from Citibank.

A snowmageddon is possible Tuesday, with the Weather Channel reporting a potential for more than a foot of snow.

Board of Education member Shirley Mosby is not too responsive to emails, so the story given by BoE Chairman Mike Lyons, regarding a lack of a civility code for the current Board, has gone unchallenged.

Until Thursday. Mosby, at the District B meeting, told NancyOnNorwalk that yes, there was an executive session about the civility code shortly after the 2015 election, at her request. But she wasn’t the only member to refuse to sign the code as written by the previous Board, she said.

Mosby said she wanted more accountability written into the code, because there was no penalty if a member violated it.

Other members agreed, she said, stipulating that she couldn’t elaborate because it had been an executive session.

BoE member Mike Barbis said at a recent Democratic Town Committee meeting that he had not been in the executive session but had been told that several members didn’t want to sign the code.

District B meetings have been held, Morris said

Reportedly, District B has not been meeting regularly. One NoN contact speculated last week that irregular meetings mean that newcomers don’t have the opportunity to rack up the attendances needed to be able to vote, hence not diluting the power structure.

District B has held 10 meetings over the course of the last year, Morris said Tuesday. Some have been rescheduled because the district has become very active, fighting the proposal by AMEC Carting for a contractor yard in a residential neighborhood, and keeping an eye on the developing thoughts for a new school in the area, he said. Activities included the creation of South Norwalk Citizens for Justice and there have been clean ups, he said.

The Democratic Town Committee has expanded to 55 members, 11 per district instead of the previous standard of seven per district.

Although elected officials stepped aside from DTC membership to give others a chance, some of those people have not been attending meetings, Morris and Council members Travis Simms and Faye Bowman said.

“Recognized around the world for its high standards for teaching and student achievement, IB delivers a rigourous education that develops the intellectual, personal, emotional and social skills needed to live, learn and work in a rapidly globalizing world. Many students with IB diplomas enter college with credits already earned!

“This prestigious designation is the result of several years of planning, preparation, and hard work by administrators and staff. Kudos to Suzanne Koroshetz, Nicole Stockfisch, Julie Parham, Kristi Carriero, Scott Hurwitz ,and all the teachers who have been trained and have agreed to teach the first IB classes starting this fall.”

Daly steps down after Trump’s order

This follows a call from President Donald Trump for all U.S. Attorneys to resign.

“All 93 U.S. attorneys — the top federal prosecutors in the states — are political appointees. A total of 47 had already stepped down,” NBC reports.

“Presidents have the right to put in place their own U.S. attorneys over the course of their administration, but this sweeping and arbitrary mass firing by President Trump clearly puts politics ahead of the safety of our communities,” U.S. Sen. Chris Murphy (D-Conn.) said Saturday in a statement. “Deirdre Daly has done incredible work defending Connecticut, particularly her focus on combating the sale of heroin across our state. She is totally non-partisan, and her thoughtless removal makes for a sad day for our state.”

“It has been a great honor and privilege to serve as Connecticut’s United States Attorney,” Daly said in a press release. “In fact, it has been a gift of a lifetime.  I am extremely proud of the tremendous accomplishments of the men and women of this office during my tenure.  I applaud their tireless work holding our most violent offenders accountable, protecting our children and our environment, standing up for our most vulnerable victims, and not hesitating to stand up to the powerful.  Together, we also built bridges and trust with communities.  I hope all of this work continues to thrive.  The people of Connecticut will be in excellent hands with Acting U.S. Attorney Mike Gustafson, and the more than 100 career employees of the office who dedicate themselves to always doing what is right and just.”

Adolph Neaderland, no fan of the application to build a big box store at 272-280 Main Ave., on Thursday emailed Planning and Zoning Director Steven Kleppin a link to a story headlined, “Five Myths About Big Box Retail.”

The Zoning Commission on Wednesday continues its public hearing on the application, but with the topic limited to traffic.

“Keep in mind that while Adolph’s letter is spot on, that since the hearing is limited to traffic, the lawyer will get this letter thrown out,” Leigh Grant wrote as she forwarded Neaderland’s email. “The only people he will reach will be the Common Council. It may help support the cause but it can’t be used on March 15th and frankly I doubt that Wrinn and Kleppin will even send it the commissioners.”

Neaderland wrote, “This piece is particularly appropriate since the attorney for the applicant stated that some 40 alternative inquires had been made and none germinated, I wonder what our Economic Development and Planning  folks have done to explore those leads for this location as a better option for the community.”

If District B has really been having these meetings, let’s see the minutes!

The reason why big box stores have proliferated is that consumers no longer want to pay full bust out retail for anything and have not wanted to do that for 25 years. At least there is real estate tax revenue- Amazon pays nothing.

The main issue with big box stores is that when they out of business there is no alternative use for the space. The U.S. has 2 or 3 times as much retail per capita as most European countries, so they are very sensitive to economic downturns. As one is coming (we always bounce between boom and bust, and today is not much of a boom), we can reasonably expect BJ’s to shut down at some point.

Same argument with the mall.

Of course, the demographic that actually accounts for discretionary spending in the US economy is not represented by any of these comments against “big-box” retail, or in Gordon’s case, shopping mall retail.

You’d think that a for-profit enterprise trying to sell physical goods (and maybe some local services) is a toxin-spewing-kitten-killing behemoth ready to destroy Norwalk’s thriving downtown. Oh wait, Norwalk doesn’t have a thriving downtown. What is has is several areas of strip malls, one commercial area with a large concentration of hair salons, and another with a concentration of restaurants and bars that only open at night.

Every retail company on the planet is evolving because of the real threat to local retail– Amazon. And even Amazon is evolving, and trying out physical concept stores because the people who actually buy stuff are a fickle lot, and one generation’s wonder bread, as in the greatest thing since sliced bread, is another generation’s junk food.

Nope. Definitely no surprise that Poko is being foreclosed on. I’ve been telling y’all for years that would happen. The only surprise to me is why doesn’t Norwalk hold the Redevelopment Agency accountable for this mess. Can someone explain why our mayor and council allow this to go on?

Regarding POKO – I would hope our elected officials would boldly proclaim their goal of re-activating the Wall Street Train Station as soon as possible. A train station at Wall Street would greatly enhance the appeal of the POKO project to prospective purchasers.

Since we, the City, are a party to this deal it would seem prudent to make the POKO project as appealing as possible.

Train Station attract investment and development, bus stations do not.