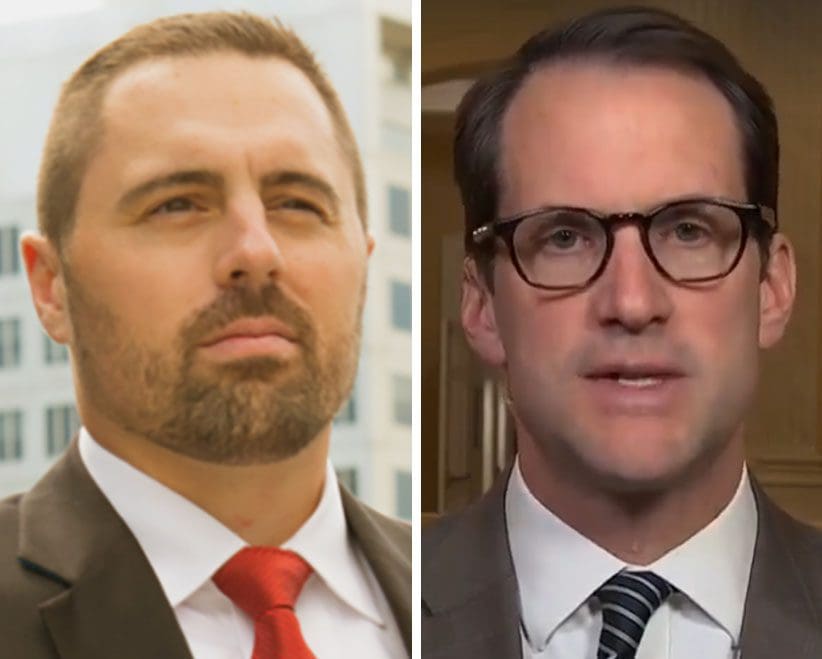 At left, Jonathon Riddle as shown on his website; at right, U.S. Rep. Jim Himes (D-Greenwich), as shown in a MSNBC interview Tuesday.

Himes “says he’s undecided on whether or not killing Gen. Soleimani was in the US’s interests,” according to Riddle. “This despite the terrorist general’s responsibility in killing over a thousand US soldiers, countless attacks on American and Iraqi contractors, and his recent role in attacks on the US Embassy in Baghdad.”

He continued, “However, when President Obama was conducting drone attacks — including attacks on wedding processions with collateral damage that killed innocent women and children, and attacks that killed four US citizens who had been convicted of nothing — Jim Himes was all in favor.”

The rest of the statement:

“When Obama killed US citizen and terrorist Al-Awlaki, Jim Himes said the following: ‘I support the president’s decision to go after him. Al-Awlaki was a very bad guy and we’re a lot safer because he’s no longer with us.’

“In the same interview, regarding the drone killing of US citizens, Himes equivocated, saying, ‘That’s a… complicated issue.’ So why is killing the world’s #1 terrorist a problem for Jim Himes when drone attacks that kill women and children at a wedding and that kill US citizens, including three innocent US citizens under the Obama administration, are merely a ‘complicated issue?’ It’s because of who the President is. Jim Himes doesn’t care about national security, he has no intellectual honesty, he’s just out to attack the President no matter what he does. When elected, I will return to the tradition of ending partisanship in foreign affairs and will speak out and advocate only for what’s best for America. Striking Soleimani and his associates, and doing so without any collateral damage, was a tremendous win for our country, and we must stand strong and stand together in the face of terrorist threats from the world’s leading terrorist nation, Iran.”

Himes on Friday released a Facebook video in response to the Trump administration’s killing of Soleimani.

“Like all of you, I learned last night that the United States military had taken a strike that had resulted in the death of General Soleimani of Iran,” Himes said. “Though I sit on the Intelligence Committee, and I’m a member of Congress, I was not briefed on what was a very, very aggressive action. And look, there is a vibrant conversation and argument out there right now about how bad this guy was, he was pretty bad, and about how bad the Iranian regime is, and it is very bad. But the question that is not getting enough attention is whether this advances our long term interests in the region. And nobody knows the answer to that question. And anybody who says they know the answer that question does not know what they’re talking about.”

“Just because you take out a bad guy does not me that you end up in a safer place than where you started,” Himes said. “And we need to be very careful here because Iran will certainly respond to what we did yesterday… This is a moment for reflection and maturity and care.”

He is quoted in a 2013 Connecticut Post story as saying, “Al-Awlaki was a very bad guy and we’re a lot safer because he’s no longer with us. That doesn’t mean that I feel overall comfortable with the idea that the president can make a list of U.S. citizens he would like to do in. That’s a much more complicated topic.”

“Wow, that is a big question, as is climate change,” Chalder replied. “The city is mostly built out, the storm water system was sized for storms that are less frequent, less intense.”

Another question is how far Norwalk wants to go with solar and/or wind power, he said. And, “the Connecticut Interlocal Risk Management Agency (CIRMA) suggests the communities plan for 20 inches of sea level rise by 2050,” he said. “Now you say to yourself, ‘that’s it.’ That’s a staggering number, right? It’s almost 200 feet higher than we’re at today. And that doesn’t even account for seasonal tides and storm events.”

He opined, “I think my advice might be that you can get the biggest bang right off the bat from the reorganization and rewrite and set the stage for some of these climate issues … and integrate those later. But if the whole set of regulations get bogged down in a question of wind turbines, we’re sort of giving up the good for the perfect and it could so it’s a delicate issue. It’s an area we need to go in, but sometimes it can be challenging to get everybody on the same page.”

Pay for your parking

Just a reminder: the City announced recently that parking in the Wall Street area would be free until Jan. 6 – and that was Monday.

This is due to decisions made by the Norwalk Parking Authority.

Respectfully, the topic of middle east terrorism requires much more thought and space than that available to a comment. Have read and commented in the online Times Of London for many years. Overall, I would say that the US and it’s citizens are not held in high esteem by a majority of UK citizens. This attitude has intensified since President Trump’s election. Many of the readers in TOL praise anything that undermines the president. Positive achievements by the president are ignored or revised to place the president under a negative light. Thus, negativity against the president’s action against the terrorist Soleimani is the slant of the reporting and comments in the TOL. It seems that it is ok to target Americans to the exclusion of other nations. But, if any country needs aid or assistance just call America.

Re Zoning considerations: How screwed are we if this is an integral part of the thought process and decision making? Despite all of the rain this year, our reservoirs are extremely low right now. Is that a result of climate change or overdevelopment? Forgetting the sea levels were supposed to rise as this much in the last 20 years but didn’t change at all, what is the goal here? Desalinization plants to produce the drinking water we’ll need when every last square inch of the city is packed with cheaply built apartments? Or more tilting at windmills?

I think you have to assume man-made climate change is real at this point. There is the human impact from greenhouse gas emissions and the less predictable natural element of climate change. Mr Kantor raised good questions, and if the City had best practices there wouldn’t be much debate. With Co2 levels now skyrocketed above 400 PPM, and all the significant natural disasters that have become frequent globally we are finally seeing slow progress in the developed world. People laugh at the plastic bag ban, but it was a small step in the right direction to curb pollution. In order to think about how far the city wants to go with renewable energy it should understand its carbon footprint. I’d doubt anyone considered the emissions footprint related to building the mall, but now we want to talk about changing zoning regulations to essentially react to climate change. Most institutions that are chasing best practices are looking to operate carbon neutral. The answer to parts of both questions is simple in thought, as best practice Norwalk could figure out its carbon footprint (greenhouse gas footprint really, methane emissions from preferred natural gas gets overlooked in the carbon equation) and develop a plan to generate enough renewable energy to meet the city’s energy demands. That then becomes the difficult part.. Solar has limitations because we’re in CT (not exactly a sunshine state), nobody wants to see windmills on land and although Lamont is pushing offshore wind in the Western parts of CT, I can’t imagine much appetite for offshore wind here in the Sound. There is always tidal power which could be explored and quite frankly there is no better place to develop a combo of these things than the polluted NRG site in Norwalk – but profit, money and politics stand in the way. Until then we’ll continue to see a combination of climate change and over-development, although things may slow when we hit the economic downturn part of the cycle. We could always bury our heads in sand and ignore the science, like Trump who never learned about the greenhouse effect in elementary school. Whether people choose to believe the science or not, building codes will continue to become stricter to survive stronger storms, flood zones will continue to expand, insurance costs will keep increasing and glaciers will continue to melt – those things don’t reverse themselves. Last I checked CT’s electricity came from 48% Nuclear, 46% Natural Gas, 1% oil and coal and 5% renewable energy. As best practice we should develop more renewable energy locally, and not fool ourselves by purchasing clean energy credits from other states just to feel better.

Right on Windpower. Norwalk should have solar on all municipal buildings and tighten building codes to require minimum energy use. Climate change isn’t an idea to be believed or dismissed. It’s reality, and the sooner we deal with it the better off we’ll be.

Jim Himes is just a professional politician. He is downright awful. I have called and emailed his office numerous times only to receive the generic letter. Maybe I should start the letter by stating I want to donate 20k to his office?

Jim Himes endorsed a convicted felon for Mayor of Bridgeport. I don’t think much more needs to be said.

@Brian Meek, where did you get the information that “Despite all of the rain this year, our reservoirs are extremely low right now”? I am not sure about Second Taxing District water supply, but First District reservoirs (as reported at the December 11 meeting of the board of commissioners) were in the range of 85-100% full in December.

Each of us Norwalk citizens, as well as the City of Norwalk, CAN do something about our energy footprint in the form of choosing your energy provider through Eversource/Energize CT:
https://www.energizect.com/compare-energy-suppliers

My husband and I have chosen suppliers providing our home energy with 100% renewable energy sources for the past 6 years. Look at the link above and see which providers offer 100% renewable service and compare the kilowatt pricing with your monthly statement. Our bills come from Eversource–Eversource is a provider, too, so there is no love lost by choosing another energy provider.

We’re now into our 2nd 100% electric car, so when we plug it in at home, the entire cycle of recharging the car is 0% emissions. Gotta love it.

When more consumers go with 100% renewable service like this, business listens. “Power” to the people! I hope the City of Norwalk does at least what we, and many other folks, are doing.