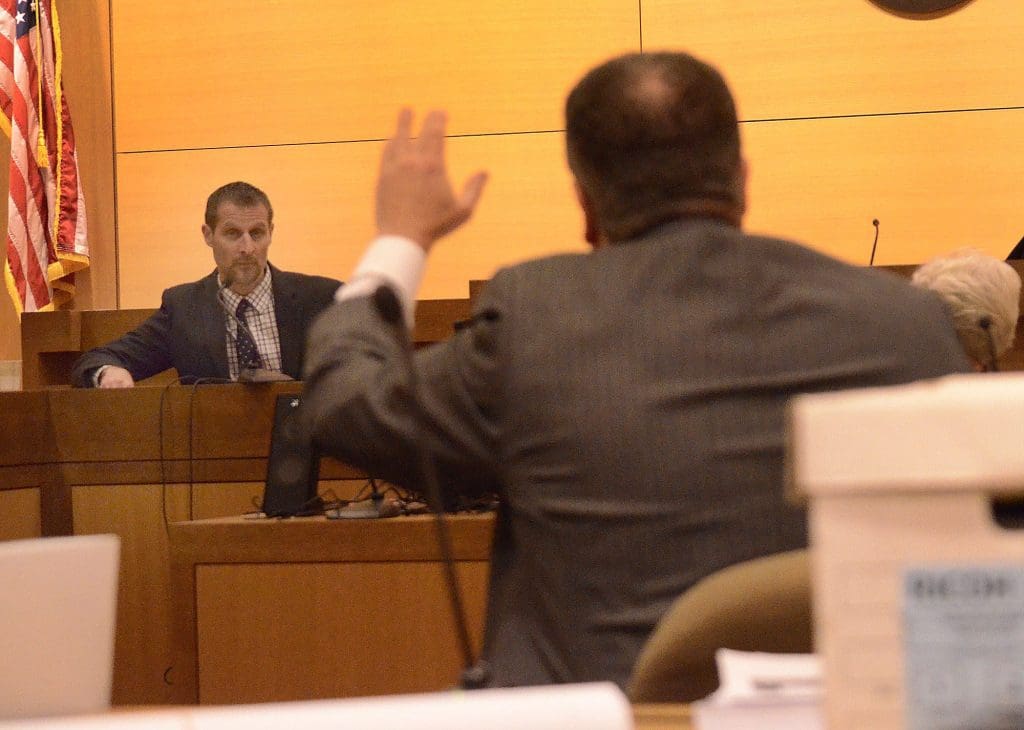 NORWALK, Conn. – Here’s some Norwalk odds and ends for your consideration:

When last we checked in on the legal bills in the lawsuit filed by the City and the Norwalk Redevelopment Agency against real estate broker Jason Milligan, the total for outside legal help was $468,460.42. That was for bills submitted by Shipman & Goodwin to the Redevelopment Agency, as of April 30. The information was obtained through a Freedom of Information Act request.

NancyOnNorwalk put in a FOI request for legal bills through June 30. The result was legal bills in the amount of $553,699.52.

Some, including Milligan and unaffiliated Mayoral candidate Lisa Brinton, have speculated that more than $700,000 has been spent in the ongoing legal war.

Just to recap: Milligan and four legal entities under his control are being sued, as are others, because Milligan bought properties that were slated to become part of Wall Street Place, a mixed-use development on land that included two former City parking lots, commonly called “POKO.” A hearing on the plaintiff’s request for a temporary injunction began in December and has yet to conclude. Milligan is currently seeking to have Judge Charles Lee dismiss the case.

The mounting cost of the litigation prompted discussion at the June 11 Redevelopment Agency meeting, where Comptroller John Slovak repeatedly mentioned “legal bills exceeding $609,000” as he explained that the Agency is $445,220 over its legal budget. An operating deficit of $376,000 was also touched upon.

Redevelopment Agency Executive Director Tim Sheehan said that Attorney Joseph Williams of Shipman & Goodwin had been asked to come up with a budget for the litigation so the Agency could revise its budget and Commissioners wouldn’t be looking at negative numbers every month.

The City is covering soft costs, such as for depositions, he said.

The City has spent about $10,000, Norwalk Communications Manager Joshua Morgan said on June 11.

Sheehan told the Commissioners that there have been “internal discussions with the city regarding the legal bills. They are well aware of where we are at. The Agency special agency counsel was asked by to take the lead in advancing this case.”

Harris: This time it’s about District B

Former Board of Education member Sherelle Harris plans to run for the Board again this fall, this time as a District B representative, not as an at large member.

NancyOnNorwalk recently asked Harris what she hoped to achieve with a return to the Board. She wrote:

“While my role as a former Norwalk children’s librarian will always have me think of Norwalk as a whole and I think that  is the obligation of a Board of Education member; this time  around, however, I am running in district and not at-large.

“It will be up to the parents and citizens of District B to let me know what they want.”

Harris would replace BoE member Erik Anderson, whose attendance at BoE meetings has fallen off dramatically. The District B Democratic committee has been vocal in their disdain for Anderson, accusing him of not representing the District and calling for his resignation twice.

NancyOnNorwalk recently spotted what it suspects was the first employment ad for The SoNo Collection: Nordstrom was looking for an Administrative Assistant 3 via Indeed.com.

That was on June 25. Nordstrom is currently looking for an assistant restaurant manager and a sous chef for its SoNo Collection locale, while Bath & Body Works has four ads posted. Sephora, Soma Intimates, Chico’s and White House Black Market are also advertising.

Mall owner Brookfield itself is seeking an operations manager for its “premiere new property, The SoNo Collection.” Last but not least, Bloomingdale’s is seeking an assistant store manager: a minimum of five to seven years retail management experience is required, preferably in a full-line department store.

The mall is expected to open in October.

Here’s a reminder from Morgan and the Tax Collector’s office: You need to pay your city taxes by Aug. 1 to avoid interest charges.

“Norwalk taxpayers have until the close of business on Thursday, August 1, 2019, to pay their property tax bills for real estate, motor vehicle, and business personal property taxes, and sewer use charges, without interest penalty,” a press release said.

The bills were mailed on June 19, were due Monday and reflect the first installment on charges due on the Oct. 1, 2018, grand list.

“This year, Norwalk expects to pave nearly 12 centerlane miles. The City is investing $6.8 million into paving, concrete curbs, and sidewalks this season,” the release said.

Mayor Harry Rilling is quoted as calling paving and investing in infrastructure a longtime priority for his administration.

“No one wants streets that are full of potholes or crumbling due to neglect,” he said. “We work carefully to inventory, assess, and create a paving schedule to help ensure all of our roads are taken care of in a timely fashion. This strategic process also helps us plan curbing and sidewalk installations and repairs to make Norwalk more navigable for motorists, bikers, and pedestrians.”

“The paving process is two-fold,” the release explained. “First, the top layers of asphalt are removed, in a process called milling, which creates a grooved surface. During milling, residents are advised to drive slowly, as there may be drops of two inches in front of driveways. After milling, paving takes place almost immediately after. Cars cannot be on the street during this time, and parked vehicles that interfere with construction will be towed at the owner’s expense. Letters to residents and property owners in the first paving areas were sent last week, with notices continuing throughout the summer.”

The list of roads the city expects to pave this year:

Last night there were a pile of people in expensive suits blabbing away about affordable housing.

Not one person from Citibank was in attendance and strangely everybody said they don’t represent or speak for Citibank. Citibank is the owner of the property.

As expected the planning committee passed this plan along to the council. Some light questions were sprinkled around and said right on cue like a carefully rehearsed sitcom, with the exception of Tom Livingston. Tom seemed super curious and like he wanted to fully understand what was being presented. He did not allow fluff off answers. Good for you Tom!

There were 2 enormous mischaracterizations (or lies).

1. New project 100% complies with the new CBD zoning regs.
Not true on height.
-The current unapproved / illegal portion is 6 stories. New regs allow for 4 strikes or 55 feet on Wall and Isaacs st. The section not currently built is also depicted as 6 stories.
-Also Not true since there is no legal traffic egress and no way to provide it. Depicted as a 1 way dead end.

2. The other big misrepresentation was that “all financing was in place”.

The bonding and LIHTC processes are both long and complicated. They have not even started that process. There is no guarantee for either. Litigation is a very strong deterrent to approval. I have had long conversations with people at CHFA, DECD and DOH.

Without factoring in the long complicated and numerous lawsuits under way with multiple parties or future litigation / appeals that are likely to ensue.

Neither Tim, either McClutchy or Mario would answer the numerous questions about timeline tonight.

The best case scenario for this project is years and years away from beginning in the most optimistic of projections without serious outreach, negotiation and diplomacy. None of which has began unless you count the secret meeting with the phantom 5 as outreach.

Todd McClutchy estimated 18 months total of preparation and construction once all approvals were to be in place.

When paying property taxes might remember over in Westport taxes have been kept unchanged for 5 consecutive years. Communities get the governance they deserve and work for. Competence works. or that Danbury spends 30% per capita less than Norwalk.

Our street was paved this year for the first time since built in 1954. Kidds can now ride bikes and old folks can walk safely. It’s nice. Without either City water or sewers paved streets are the essential City service.

As a reminder, the last iteration of this plan in Jan 2015 (never approved by zoning) included five stories in some places

A one-way dead end street. You have to laugh, except ruinig a good resturants’ livelihood is not funny at all.

The practice of claiming to have moral standards or beliefs to which one’s own behavior does not conform.

There are so many people in Harry’s orbit that accuse me of not following the rules. Mario Coppola leads this campaign, While he is the rule breaker in chief. He routinely ignores rules and writes new ones.

The hypocrisy was on full display last night.

It started with Mario Coppola huddled up and passing out last minute instructions to Team McClutchy before the meeting.

McClutchy is not an owner of property and both he and his attorney stated that they do not represent or speak for Citibank. How were they allowed to present. Mario bent the rules, that’s how.

Mario is ushering this $80 Million bailout thorough in the dead of summer. Back when Mario and I were on speaking terms over the library he told me that this was one of his secrets to get things passed.

Mario is trying his hardest to get people to not pay attention to the details.

Why was Tim Sheehan sitting at the staff table last night? Wasn’t he fired? Sorry pushed out the door?

Mario, Tim and sparkling Team McClutchy all assured us last night that this is only the beginning of the public participation. We will have lots of opportunities to share our opinions and be given all the details.

In reality, the details will be dropped on Friday’s before long weekends in hundreds of pages long documents. Meeting and agendas will appear with short notice, and plans and applications and documents will change rapidly.

The few dedicated people in the public that take the time to read the hundreds of pages and try to follow will be dismissed as naysayers and the government bodies will rubber stamp everything.

Then I will cut off access across my property and then Isaacs Street will be a 1 way dead end. Even if switch to two way there will be no place to turn around. Imagine a Fedex truck or Fire truck trying to perform a 3 or 10 point turn in front in an already narrow road.

And there will likely be more litigation. Hooray for Mario and his buddies. Billable hours…

Excuse me I am putting my binky back in for a few minutes-Tysen.

Regardless of how you feel about Jason, he makes very good points. More importantly, he makes it very clear what the City is doing and he highlights much of the actual ineptitude that surrounds this project.

As a building owner located directly across the street from the Tyvek Temple I clearly hear what Jason is saying – it makes a lot of sense. The last thing we need here is a long, drawn out litigation that see’s the Tyvek Temple sit there, as is, for years.

The City could do so much better. Start by nixing this current deal.

I don’t fault Citibank or McClutchey, they are just acting within the range of reasonable business activity given them by way of Norwalk’s municipal advisors.

It does make we wonder as to the motives of the Rilling administration and RDA – why are they so hell-bent on adhering to this crappy (for Norwalk) but excellent (for Citibank) project?

Maybe Mario should take some ques from Jason and get Citibank to rectify the Isaacs Street one-way dead-end street issue.

What a great analogy for everything surrounding this project… one-way, dead-end.