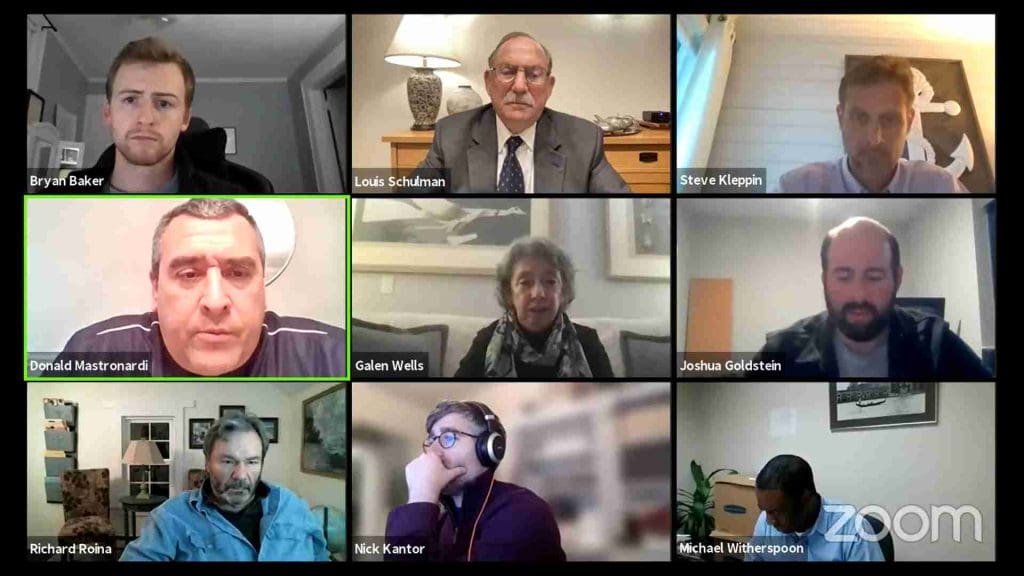 NORWALK, Conn. – Some Norwalk political info for you:

Mastronardi is both park GM and a park tenant

Back in March 2021, Oak Hills Park Authority treasurer Joe Andrasko said the Authority planned to hire a general manager to oversee the diversified food services and contracts with tenants.

“We’re not looking for a new {restaurant} tenant, we’re looking for a partner who will be overseen by our new general manager,” OHPA member Babar Sheik said.

The Authority subsequently hired Mastronardi as its general manager, the role previously described as the person who would oversee the restaurant tenant.

Asked about that at the time, then-OHPA Chairman Mike DePalma said, “the main goal of the reorganization was to ensure the restaurant worked in conjunction with the rest of the park, including both the golf course and the nature committee, as opposed to just a standalone tenant that happened to be on a golf course. To that end, Don has a strong resume having run the food and beverage operations at Silvermine for several years, working hand in hand with their GM. We felt he was the best candidate to bridge the gap between the restaurant and the entire park.”

There appeared to be another issue: no public vote was held to name Mastronardi as the general manager.

DePalma explained, “personnel hires do not need to come to a vote. The executive committee kept the remaining members aware of what was happening throughout and did not receive any negative feedback.”

Mastronardi had struggles in opening the restaurant; when the space was remodeled, the bar was lengthened, and it was nonconforming to code.

In November, Mastronardi told the Zoning Commission that the 19-foot by 6-foot bar allowed for hand sinks, refrigeration and other health-related equipment, which wouldn’t have been feasible with the regulation 15-foot bar. Also, it was remodeled to be a sit-down bar, not a service bar.

Mastronardi got the approval he needed, and Dry Dock’s Smokin’ Aces opened in March, one year after getting the lease.

Early this month, it looked like the Common Council was ready to approve a $31,375 traffic study needed by the Board of Education if it wanted to try again with changing high school start times.

Council Committee members on May 5 greenlighted the expense, sending it to the full Council for a vote. But instead of voting on the study the following Tuesday, Council members tabled it, without comment.

“After consultation with {BoE Chairman} Colin Hosten, the action was tabled primarily because of impending changes to traffic patterns due to the recent and proposed school building projects,” Council President Tom Livingston (D-District E) explained Sunday in an email to NancyOnNorwalk.

Hosten attributed the shift to the legislature adding $50 million to the budget for a new Norwalk High School.

“After the phenomenal news last week about the added funding for the new NHS in this year’s state budget, it makes sense to table this traffic study until all the new NHS traffic patterns have been more fully ironed out,” Hosten wrote. “We thank our colleagues on the Council for continuing to be great partners in supporting this work.”

Mike Yeosock, TMP (Transportation, Mobility and Parking) Principal Engineer, had said that the Board of Education wanted the study done “just to complete their packet; it doesn’t mean that they’re going to move or not move (forward) but they would like to have the study done so they could answer people.” 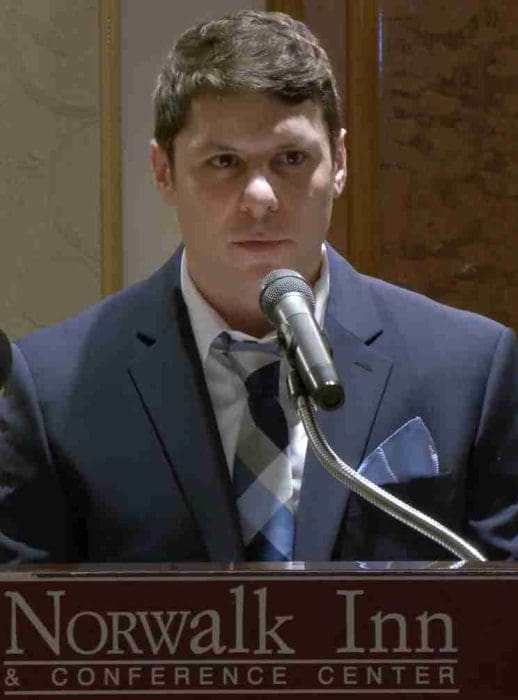 Daniel Miressi’s endorsement to be the Republican challenger to State Senate Majority Leader Bob Duff (D-25) has created a firestorm of commentary on NancyOnNorwalk, with some readers digging deep on his background.

Miressi was living in Southbury in April, one public people search website revealed. He has a long history of living there.

That confirmed what seemed obvious; while Miressi was said to have been born in Norwalk, he didn’t appear to have lived here long. He registered to vote here three days before being endorsed, according to Republican Registrar Brian Smith.

With reader commentary continuing, Miressi joined in, explaining why he decided to run.

“I was born in Norwalk,” he wrote. “My family, uncle, cousins all still currently reside in Norwalk or were Bears at one time or another, {even} bringing a state football championship to Brian Mcmohan {cq} as the head coach in 1994. This has remained constant throughout my childhood and young adult life.”

Miressi said his mother and her three siblings were born and raised in Darien. His grandparents were active in Darien’s community, “One as the postmaster and volunteer fire chief of the town, the other a lifeguard at the beaches and a swim coach at the YMCA.”

“I went to Trumbull High school, after growing up in Monroe. But my best friends were teammates in youth hockey from around here. Teammates in Norwalk, Darien. Countless sleepovers and street hockey all in this district I am trying to represent,” he wrote.

One reader mentioned that Miressi has “police reports.”

“After my short college and professional hockey career I came back home and had nothing but my parents couch, who were forced to downsize from the house I grew up in to heritage village Southbury,” Miressi wrote. “I felt lost and hopeless in my mid 20s; it led me to driving my car carelessly, finding out I have a misdemeanor charge, for missing a court date. I was spiraling, and in that moment I knew the only way out was to try and become a better man and better citizen.”

He continued, “It’s been a long road, and while working at the post office A year ago I met a wonderful girl and we decided to live in Norwalk. At the sono harbourside. We did that because I told her how wonderful this place is to raise a family. It’s the American dream. Darien and Norwalk have different cultures, different needs, and have been frustrated by leadership. All I want to do, and why I am running, is to preserve those traditions and values that people feel passionate about as a resident here, help the average citizen like me start a family, and unlock the potential of every individual that lives in our district. That’s what representatives should do. Not turn their back on the people. I’m standing up to be the voice for everyone who has felt they have been wronged by Bob Duffs lies, or leadership.”

“When I met Daniel, he had recently chose to transition to the Foxboro Dr. location off Route 7 due to proximity to his job with USPS,” she wrote. “I am from out of state but have always wanted to move to Fairfield County because I loved Darien, I loved Norwalk, and would often drive for Colony or Sallys/Pepes and make sure that I detoured through this area. I decided on HARBOURSIDE SONO, and was happy to have my feelings about the area confirmed by Daniel’s confirmation with his own family ties and memories of the area.”

She continued, “Unfortunately, I am moving out of SONO, due to high rents and indiscriminate rules and regulations especially with pets, but chose to move closer to Foxboro Dr – Daniel and I spend much of our time together so he feels like he is home at Foxboro and here with me in the heart of the community. We love Donovans and are regulars and walk our dogs throughout the neighborhood so we SEE first hand what is becoming of this community. I can’t imagine living anywhere else, truly. I love it here. If not SONO, I still found a way to stay. This is my home. It’s his now too not just because of me but because of all of you too.”

The City’s website indicates that a Cynthia Miressi owns a condo on Foxboro Drive.

After a quick Google search, what on earth are Republicans doing throwing their vote behind this guy? He makes the choice to leave a store with clothes without paying and promises to return to pay? What type of lapse of judgment is this? This is just pure neglect of the law.

I am sure that Daniel will blame the employee at the store or the Duff administration, but this isn’t even a political issue, this is an issue of care. How are we supposed to trust someone who can’t even make proper judgments at a retail store?

Has anyone ventured out to check the tweets that he had once posted? #Liberalismisamentaldisorder is in his bio. If Daniel thinks he can just use buzz words and lingo from Hannity and Carlson, he is in for a rude awakening.

Cannot wait to see the excuses from this one!

Many old timers have wonderful memories of eating outside on the veranda of the restaurant at our Oak Hills Park enjoying truly loverly views. Indeed some would say Oak Hills is the best situated public dining spot in all of CT. And many recall fund raisers and formal affairs at once celebrated Oak Hills. Former Mayor Alex Knopf was instrumental in its original development.

Yet in recent years with changing restauranteurs Oak Hills has fallen on hard times. Pleas to City leaders for corrective action haven’t been very successful. The dining room remains a vestige of itself. Long gone are the large private affairs – weddings etc – once held at Oak Hills.

Then there was the bar where many of the local “personalities” would frequently socialize and occasionally do business. Enjoying an extended lunch oft brought good company. And some local personalities.

We miss the old Oak Hills having eaten there untold dozens of times enjoying the views and meeting fellow citizens, friends and local politicos.. Sadly creating a vibrant Oak Hills restaurant seems beyond the capacities of our local leaders. When operating it was the best of Norwalk.

@Piberman: It’s the same old broken record with you. You need to get your facts straight. That restaurant building was never large enough for large private events and NEVER generated sufficient revenue to pay for itself. It was nothing more than a millstone around the neck of the OHPA. In case you haven’t noticed, thanks to people like Carl Dickens, the OHPA has turned the course around so that it is now a successful enterprise. It was your old boys club that, for decades, was driving it into the tank.