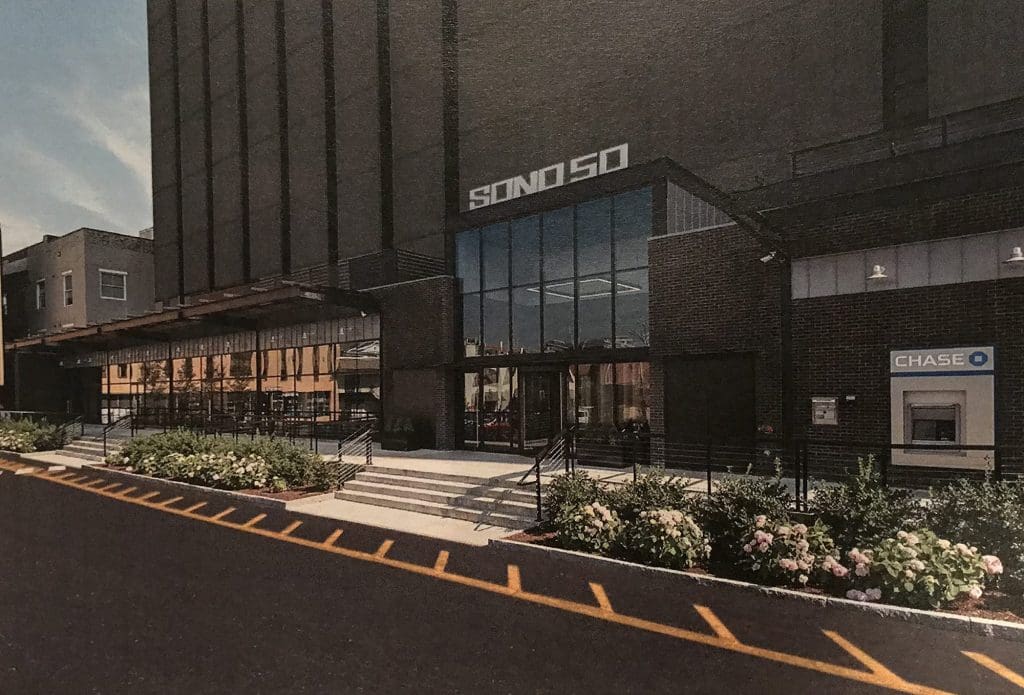 An artist’s rendering of the plan for 50 Washington St.

The election is Nov. 6. A Democratic primary is Tuesday. 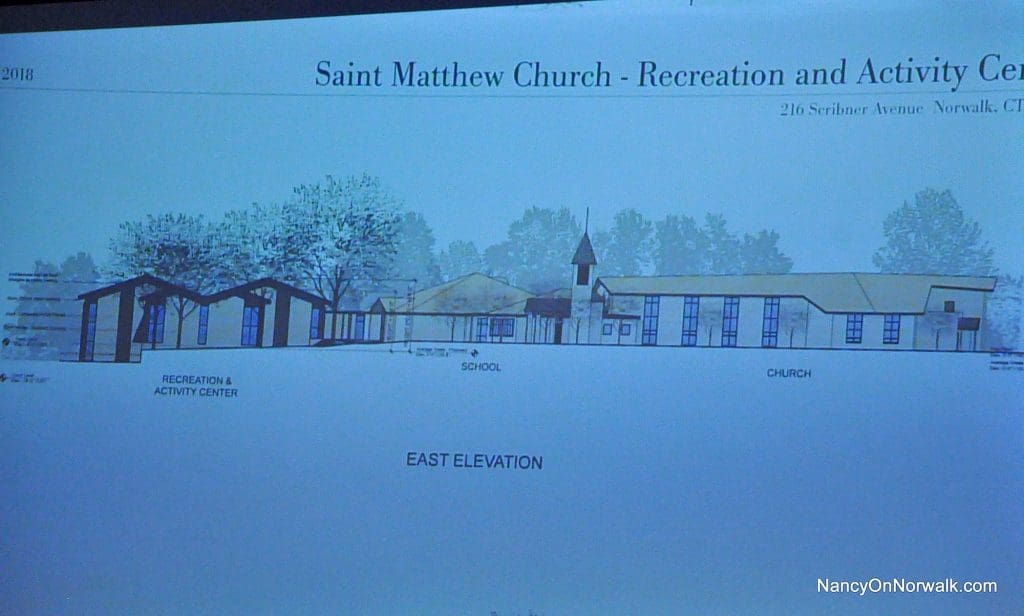 “We are almost at our limit of our parish center, which people gather in, and this rec center would give us an opportunity to provide more space, to pray, to work, to play together as well as to do good for others. Certainly St. Mathew would be a place where we seek to make a difference in our community,” Monsignor Walter Orlowski said to the Commission. “If you can’t get them in the front door of the church, then you look to get them in other doors that are on your property…. The rec center is by no means a public place. It is built by St. Matthew people, it will be used by St. Matthew people.

“The purpose of this rec center is to complement or augment what we already do at St. Matthew parish,” Orlowski said. “It is my belief that if a church or a synagogue or whatever the religious institution is, is going to be viable in the 21st century it must be the center of people’s lives. At least we need to try to be able to try to present opportunities for people to gather, opportunities for good growth, not only to approach the spiritual life but also to look at opportunities for service and social and anything that brings good people together, both young and old.” 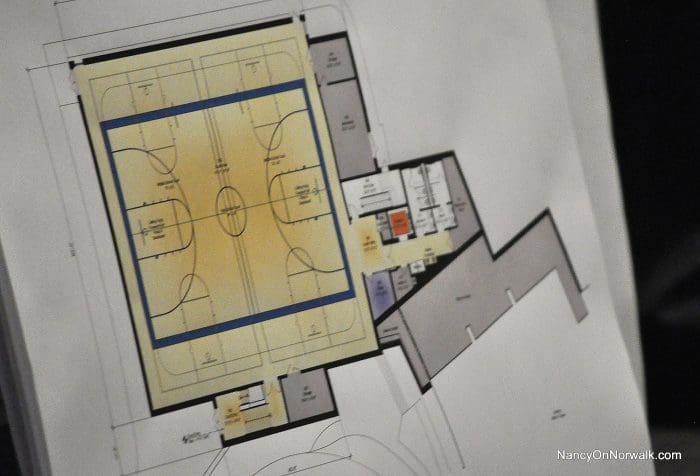 A diagram of the planned recreation center.

The recreation center is only for church activities, Attorney Robert Maslan, former Corporation Counsel, said, adding that under the U.S. Conference of Catholic Bishops’ VIRTUS/ Protecting God’s Children policy St. Matthew’s “can’t have outside groups that are not related to the church.”

There will be no shower facilities and no bleachers, and the recreation activities won’t be concurrent with masses, he said, explaining that St. Matthew’s has had exercise groups for years and those groups will move from the current great room to the new basketball court.

Architect John Doyle said the church will remain prominent with the rec center built into the hill on the left side, 100 feet from the street and tucked into the woods. There will be two middle school gym-size floors for “really a multipurpose space” to be used for volleyball or indoor hockey, “pretty bare bones, just the gym space.”

Three neighbors expressed concerns about traffic and lighting, explaining that people have parked on their yards and they haven’t complained.

“I have been a good neighbor for this but again, at what point are they not going to continue to expand?” Wendy Bardos asked. “For the property values, I’m not so sure it’s a good thing either. It’s a triple A zone, it’s a residential zone. It’s turning into something that … I don’t feel as a Norwalk resident for my entire life that this should be happening.”

People made a big stink when another group was going to build a mosque in Norwalk and St. Matthew’s expansion is substantially bigger, Bardos said.

Two parishioners spoke in favor, with Frank Mauro commenting that his grandchildren will use the rec center. The Council chambers was full of people, and most held their hands up to signify that they were in favor of the rec center.

Maslan said Orlowski had agreed to do something about the existing lights, to address neighbor concerns.

“I think all religious facilities should have a gym, I think it’s wonderful,” Commissioner Lou Schulman said.

Given the size of the property – 21 acres – the building is in scale and is well thought out, Commissioner Richard Roina said, adding that Norwalk Police are “extremely skilled at managing traffic.”

“There will always be some neighbors who are not going to be completely in favor,” Commission Chairman Nate Sumpter said, suggesting that working with neighbors helps and, “This is a good project.”

Colin Hosten, a Democrat seeking to represent District 140 in the statehouse, has opened a campaign headquarters at 23 South Main St. in South Norwalk.

Hosten and Common Council member Travis Simms (D-District B) are running for the Democratic nomination to succeed State Rep. Bruce Morris, who is not seeking reelection. There’s also a Republican-endorsed candidate, John Flynn, running in the overwhelmingly Democratic district.

Hosten said during Saturday’s campaign HQ opening that he has won a Working Families Party endorsement. He’s also a Gun Sense Candidate of Distinction from Moms Demand Action, “because I also demand action,” he said.  He also emphasized diversity and affordable housing.

In an interview with NoN contributor Harold Cobin, Hosten said he has lived in Norwalk for 10 years and knows he’s an underdog considering that Simms was born and raised in South Norwalk.

“Norwalk right now is in a great position to attract a lot of great people who want to live here,” Hosten said. “We want to make sure we are welcoming those people, not saying, ‘hey this is my town, not yours.’ This is a town that has room for everybody, I believe that.”

“As Norwalk grows and changes we want to make sure that it remains affordable, that growth does not displace people,” Hosten said. “In the district, like maybe a mile away, I talked to one woman who was literally being evicted from her  house that day, a house that she grew up in, that her parents owned, and that she can no longer afford.  On the same day, I canvassed a newer resident who lives in a nice apartment, she’s obviously doing very well for herself.  And they’re both constituents in this district, and we want to find a way to make sure that the issues we have in common, we can make some progress on them in a way that does not leave anybody out of the conversation.”

Mike Oz and his team were in front of the Zoning Board of Appeals last week, successfully seeking a variance to allow mechanical equipment within 1.5 feet of the edge of a first-floor roof at 50 Washington Street.

During their presentation, Oz’s representatives noted improvements made since Oz acquired the building in 2014, and Oz promised a paint job soon.

Oz “invested tremendous energy and capital into improving the building, both inside and out,” Attorney Jacqueline Kaufman of Carmody Torrance Sandak and Hennessey said. “It’s gone from a dated and neglected building to a competitive, attractive and state of the art space due to his diligence.”

Jim Sackett, CPG Architects vice president, said the structural integrity of a first-floor overhand had been maintained but the roof removed, so that the steel beams were exposed as an aesthetic amenity that gives the building a more modern look.

The building will be painted, with necessary approvals and permits, Oz said.

Updates have taken a while because “we weren’t willing to compromise on the aesthetic of what the building is,” Oz said. “The biggest challenge was actually taking that building that doesn’t belong there and make it look belong there.”

Landscaping has been added and the dumpster area reconstructed, and interior spaces have been gutted one floor at a time, he said.

“The building is not going to be only looking good on the outside, it actually meets all of today’s codes. It’s clean and safe,” Oz said. “When we are done, hopefully it’s going to take another couple of years, when we are finished, it’s going to be literally a brand-new building.”

Any candidates expressing a serious interest in using City resources to attract new business to SoNo to provide good jobs for itts residents and thereby raise living standards and prosperity for SoNo ? City Hall likes its Developers. But who speaks to improve the economic lives of our SoNo residents ? Prior to our politicians inviting Big Box to our City our Downtown was easonably vigorous with many individual stores providing broad employment to City residents. Would be interesting to hear from candidates how they propose to reinvigorate Downtown so it becomes an active part of City life. Good jobs are the key.

Colin Hosten needs to understand after ten years the not so nice apartments need state help.The last thing Norwalk needs is more apartments and condos with new people who don’t realize what kind of city we have until they move in.

Lets take care of the residents we have if you want to rep the city first learn the inner workings and its problems id be fine with that.

Our inner city has problems from crime to housing and all the things in between how are we going to provide for others to join us when we cant take care of our own immediate problems first as a city?

Maybe it not who you know its what you know , maybe a couple of terms working out of city hall you could go to Hartford and get what we need.

Our other birth right son Bob is more of the example you were trying to make.If Bob knows the problems then he has been ignoring us in Hartford.

If you want to understand our environmental problems learn what the DEEP needs to enforce and police the state. You sound better qualified to work at city hall than the state house. To suggest birth right over what you know than who you know seems confusing.

Id rather have someone who knows the problems and what needs to done at the state level than talking Norwalk issues that are surfacing every day.

Ive been able to meet people who are working paying taxes and are living in housing that are ill. Heart wrenching details are coming out of Norwalk soon on the condition of some of these units,our city leads us all to believe new units are going to solve the problem yet they are two years away from moving in for some .

If an underdog is running for office, should the underdogs that need the most help in the city be first in line or at least considered ?

The here and now issues have not surfaced yet I realize its early but not too late too learn whats going on in Norwalk.