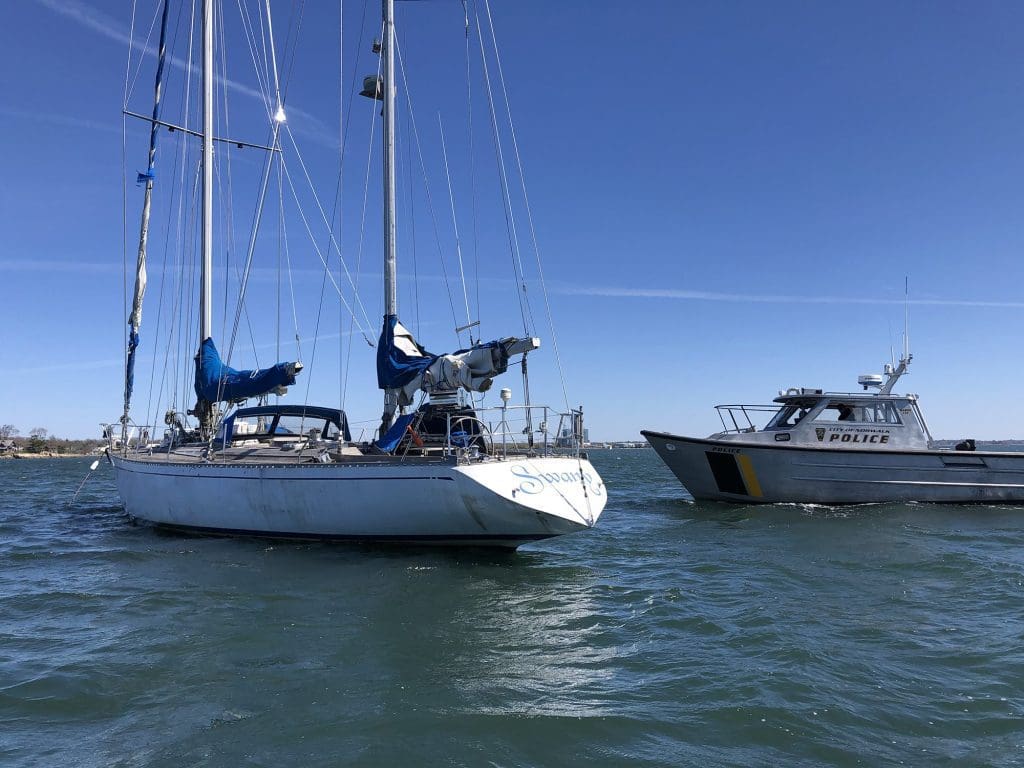 Swany, being moored near Sheffield Island in early May. (Contributed)

NORWALK, Conn. – James Harding’s boat remains anchored off Sheffield Island, more than a month after he was told it would become City property if he didn’t claim it.

Harding was given a reprieve – the State granted him another 30 days to find it a new home. But Harding isn’t opening his certified mail, according to Norwalk Police Officer Mike Silva.

Harding did not return a phone call from NancyOnNorwalk.

Swany, Harding’s 72-foot twin-masted sailboat was removed from the Veterans Park visitors dock just before Memorial Day. He had brought the yacht there in early March without permission and people needed to use the launch ramps, City officials said.

Harding had been told “in no uncertain terms” that he wasn’t allowed to leave the boat there and ordered to remove it, Deputy Corporation Counsel Jeffry Spahr said. But Harbor Master Greg Scully quoted Harding as saying he doesn’t need permission to tie the boat up at the visitors dock, because, “‘I’m a Norwalk resident, I can do whatever I want. The docks belong to me. Nobody can make me pay.’”

“It’s a public dock,” Harding said to NancyOnNorwalk in early May, charging that its removal reflected a “dysfunctional situation” on the waterfront, too many rules and regulations.

“It’s sitting out there in the water at Sheffield Island and I’ve got lots of equipment on board and they are not tending it, and there’s no way I can get out there and tend it,” he said, characterizing the City’s move as an attempt to steal his boat.

“He is free to take the boat anytime he wishes. We would give him a ride to it if needed,” Spahr wrote.

Scully, at the June 3 Harbor Management Commission, said Harding was given another 30 days to get his “paperwork together, his registration, and hopefully find a spot to bring his boat to.”

Spahr later told NancyOnNorwalk, “I am not sure what storage options are available to Harding. We are not interested in keeping his vessel ad infinitum. Our interest would be for HIM to take the vessel to someplace where HE has arranged for storage.”

Spahr continued, “If he fails to do so and the title is passed to the City, we will move swiftly to sell the vessel to the highest responsible bidder and divest ourselves of this headache.”

Harding had until June 11 to start the documentation process, Silva explained. “I was told by the Coast Guard that he retained a company that does it for you but had not moved forward. Further he was using a LLC in Delaware to avoid Connecticut taxes. Illegal.”

“Mr. Harding would be well advised to take his vessel at his earliest convenience,” Spahr wrote. “He, of course, will have to pay (as do all other boat owners) to have his vessel safely docked at some facility. It is my belief that he either does not have the funds or is unwilling to spend the funds to properly take care of his boat’s storage needs. If that it the case, he should just abandon the ownership of it. Of course, he could always sell it himself at this time and pocket the proceeds of the sale for himself. Maybe he could use the profit to downsize to a more manageable vessel.”

Scully, at the May 5 Harbor Management Commission, made many disparaging remarks about firefighters on the marine boat as “wanna-be cops,” who are “mad that their hands are tied, you know, because they’re only a fire boat.”

This was inspiring by a story circulating, that the fire boat had escorted Swany to the visitors dock, and firefighters had helped tie up the boat. Harding said people who were on the dock helped him tie Swany up.

“I would like to apologize,” Scully said June 3. “I would also like to add that we both do the same job. We approach it at two different angles. But ultimately, we’re looking to achieve the same result, which is public safety and protection. So I just I just wanted to put that out there during the meeting.”

Why doesn’t the city buy it and use it as a tour boat and charge admission. I’m a former resident of Norwalk, class of1972 N.H.S.First graduation class of the new H.S.Many moons ago.

Sounds like this joker just wants to fight with people. All that blathering on about his “rights” simply belie the fact that he feels entitled to never be held accountable by anyone else.

Thanks for the update Nancy.

Let’s sell this vessel and use the funds for ELL crisis in Norwalk School system. We sure aren’t getting any help from our State reps and Hartford. As I get seasick I have absolutely no interest, but I’m sure someone who pays their taxes on time would take it off our hands right away. Or tow it to Harding’s house and drop it on his front lawn. I’ll pay for that myself.
Speaking of the sea, today’s American shout out goes out to Commodore John Barry. Considered the “Father of the US Navy”. Although John was born long before “Woke” culture became a big thing, I don’t think the Politically Correct police can find anything wrong with John Barry’s background. As a fellow Irishmen (Big John’s family was booted from his land by the English as a child) I proudly salute Big John for a job well done!!

Muccigrosso nailed it! Nothing else to say.

Not being a person of interest in sailboats, I would be very interested in purchasing this vessel to live on. I am handicapped with a life time of being on the water! Letting it sit to waste away is not an option! Although it always comes down to the cost like most things.