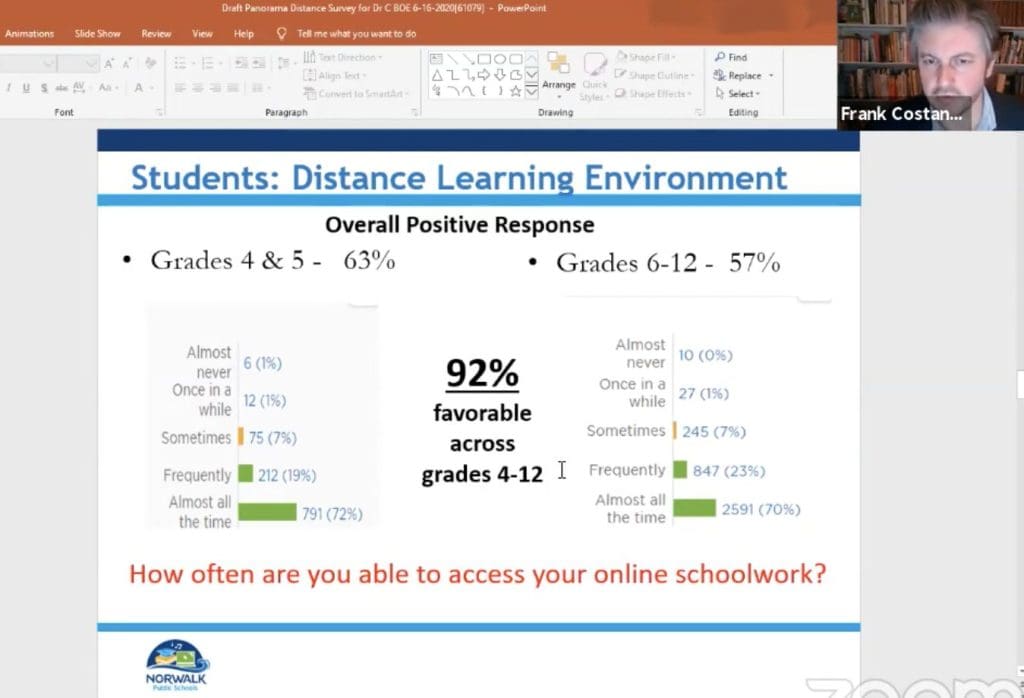 NORWALK, Conn. — More than 4,800 students in grades four-12 shared their distance learning experiences, along with 1,154 teachers and 4,181 families, through a district-led survey.

“The focuses for this survey were twofold for students,” Norwalk Public Schools Chief of School Operations Frank Costanzo said. “We wanted to get a sense of student well-being during this distance learning period. And we also wanted to find out from student respondents what their experiences have been like with distance learning.”

The survey, conducted for free by Panorama, the company that did the district’s school climate survey, also allowed staff and families to answer anonymously about how the experience has been for them and what their needs might be.

“We looked at students…habits, what needs they had with distance learning, what their environment was like, around distance learning and then the social support,” he said. “Teacher and staff were responding to these areas—generally the perceptions of distance learning environment, professional needs, staff collaboration, student support, family communication, staff well-being and (social and emotional learning.)”

For students, 69 percent of those in grades four and five who completed the survey, responded positively to overall questions about their well-being during distance learning. In grades six-12, those feelings were rated as 61 percent positive, with the lowest positivity number coming from grade 11 at 56 percent.

Specifically, Costanzo said the survey asked students about their happiness, safety and helpfulness from the teachers and staff members.

Students were also asked about negative feelings they might be experiencing during this time, such as being mad, bored, lonely or sad.

“What we found was that the majority in most cases of responses answered ‘almost never’ or ‘once in a while,’ to them being mad, bored, lonely or sad, with respect to the distance learning experience this year,” he said.

“That’s really certainly a highlight of this survey and kudos to IT and the work of Ralph Valenzisi—providing families with access to the internet and electronic devices was certainly a highlight of this survey, and something that we should be proud of as a district, including continuing to expand it to the areas of our population that were still without electronic devices,” Costanzo said.

“We were pleasantly surprised that families didn’t—at least the families that completed the survey—did not exhibit the level of food insecurity that we had predicted that they would,” he said.

Still, Costanzo and Board members noted that the survey was filled by around 40 percent of parents from all grade levels across the district, so some needs might not be highlighted.

Families raised a few concerns about their children’s social emotional well-being with being out of school, as well as their learning experience.

About 47 percent of families said that they were somewhat, quite or extremely concerned about their child’s learning with school closed.

About 58 percent of staff members said that they were somewhat, quite or extremely concerned about supporting other people in their lives during this time, such as children or other family members.

“Clearly there was quite a bit of stress going on in the lives of staff members, both professionally and personally, as you can see here, in the response data,” he said.

In terms of how distance learning was going, 68 percent said their students had been consistently participating.

“I think that does say something about the good work that curriculum and specialized learning has done in a very, very short turnaround time,” Costanzo said. “You know, we had a day or so to work with staff. They went out, they developed remote learning plans in phases, and learned as they went along and did the best they could to engage their students throughout the duration of the pandemic.”

Concerns and the Future

Board member Barbara Meyer-Mitchell said that she hoped for quicker turnaround time on polls and surveys in the future to be able to provide more immediate responses.

“I think when the Board asked for a survey in April, we were hoping for a survey that happened very quickly in April, and then we adjusted for the next phase,” she said. “Maybe we could have a town hall a week before we move into another phase if we were are in shutdown, in which…people can call in (and) we do live polls and see where the problem areas might be in a faster way so that we can change course, if it’s needed in real time or as close to it as possible.”

Board member Heidi Keyes expressed concern for the youngest students, those in grades kindergarten through third grade, who started the distance learning with just paper packets.

“We had just paper packets for quite some time and I would be interested to know at some point, you know, if there was a slide, because families didn’t have access to online learning and they were just paper packets, tons and tons of paper packets that were sent out,” she said. “I’m concerned about the slide that happened in between that time.”

Costanzo said that the data collected in the survey will be used to inform their plans and models for the fall.

“This data will be important to look at when the reopening taskforce begins to chart its course, for reopening in the fall,” he said. “We don’t really know what the future holds in terms of a pandemic resurgence.”

Constanzo said that this data will help them keep what’s working and improve what’s not.

“I think we’ve learned a lot of lessons from the remote learning experience that we’ve been on together with teachers and administrators and students and families. And this, this data will come in handy when we look to see areas that we can improve upon, and also things that we should continue to do that we’ve done that have worked out well, for our students and our staff.

Keyes said more surveys and data during any reopening process would be helpful as they make decisions going forward.

“It’s important for us, as a Board and community to hear voices and how things are going and whether we have to tweak it, change it, improve upon it,” she said.

Just curious to know if this survey was snail mailed or online. If it was online, that might have skewed the results – especially the families’ technology responses.

Truth. That’s all we ask.