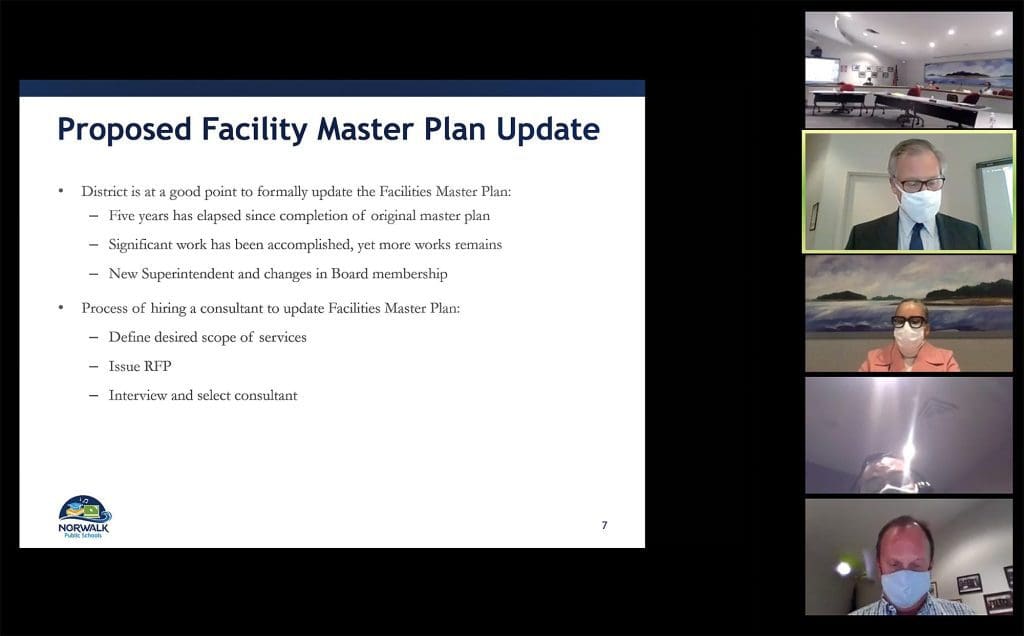 NORWALK, Conn. — In 2015, Norwalk Public Schools underwent a massive study to look at its school facilities including building and physical site conditions, demographic and enrollment projections, and the utilization phase, or a 10-year facilities master plan.

Now, the district said the time is right to do another facilities study.

“We really are at the ideal point to take a momentary step back and take stock of where we are, and really put together an updated plan for the next five to 10 years,” NPS Chief Financial Officer Thomas Hamilton said. “We’ve accomplished a lot. But there’s still a lot more to be accomplished, as we know.”

Hamilton said they’re working on putting together an RFP that will allow the district to hire a consultant to update the facilities master plan.

“We don’t think it necessarily requires the length of time and, you know, everything that went into the first facilities master plan, but five years in is a good time.  We’re at a good juncture to say, ‘Okay, let’s take stock where we are, what do we want to do going forward and really prioritize what the projects ought to be over the next five year period,’” he said.

In January 2016, the comprehensive study, which was put together by Silver Petrucelli & Associates in association with Milone & MacBroom, was presented to the Board of Education. 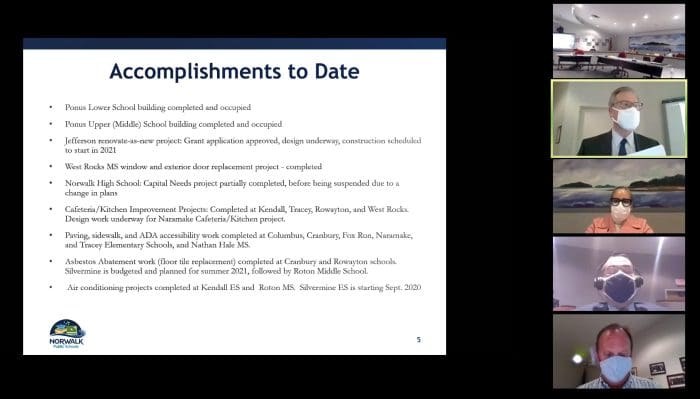 That study revealed “a number of major findings,” according to Hamilton, including significant deferred maintenance and underinvestment in the facilities; growing district enrollment and a shortage of approximately 900 seats; and that a major financial investment from the city was needed to fix these issues.

The plan called for:

Some of these items, including the new school K-5 school and renovation at Ponus Ridge, have been accomplished. Others, like Jefferson, are currently in the process. Hamilton said that the Jefferson project is in “design” and is expected to be in construction in 2021. Meanwhile, the proposed construction at the Nathaniel Ely site has been put on hold due to an open space issue, which has also not allowed the construction at the Concord Street site to take place.

Since then, however, there’s been a few developments including the need to do a “complete rebuild or new school at Cranbury,” and the new plan to rebuild Norwalk High School. 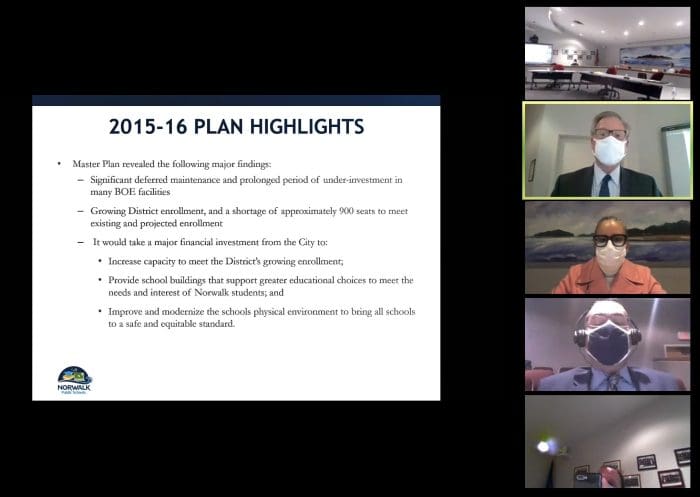 “Norwalk High School, the capital needs project was partially completed, and then was suspended, as you know, because of a change in plans, so that project now is expected to receive state approval to move forward based on a complete new rebuild of Norwalk High School,” Hamilton said.

The plans to rebuild Norwalk High School came as a surprise to many in the community as it was not originally included in the last master plan, but announced at a press conference, led by State Senator Bob Duff (D-25), along with Mayor Harry Rilling, and former Superintendent of Schools Steven Adamowski.

In Conjunction with Other Studies:

Superintendent of Schools Alexandra Estrella said that the new facility study will be done in conjunction with an equity listening and learning tour, which will help the district gather community feedback in a variety of areas, as well as a study that has been ongoing by the district and Connecticut Center for Schools Change, a nonprofit, whose stated mission is “to improve teaching and learning, to reduce achievement gaps, and to promote equity in Connecticut schools.” That study will be wrapping up in early October, she said.

Alan Lo, the City’s Building and Facilities Manager, is also working with the district to conduct a “facilities capacity study,” which would look at the student capacity in all the buildings as well as the needs of neighborhoods.

Estrella said that they know there is a need for seats in South Norwalk.

“South Norwalk has a constant growing population of students that we’re serving within our schools. So there’s definitely a need in that area for additional seats,” she said. “If we look at the need, as an overall district, we might come up with a false perspective of what is needed based on neighborhoods. I’ve been involved, in my prior experiences, in projects similar to this. And it’s really based on neighborhoods, not necessarily district-wide enrollment for that, for that reason, right, because you might not have a need overall, but when you look up particular regions, there is a significant need within a particular region, zone or community.”

Hamilton said the plan is to get the RFP together within the next week or so and then they will review applications for a consultant to get the new facilities study underway. 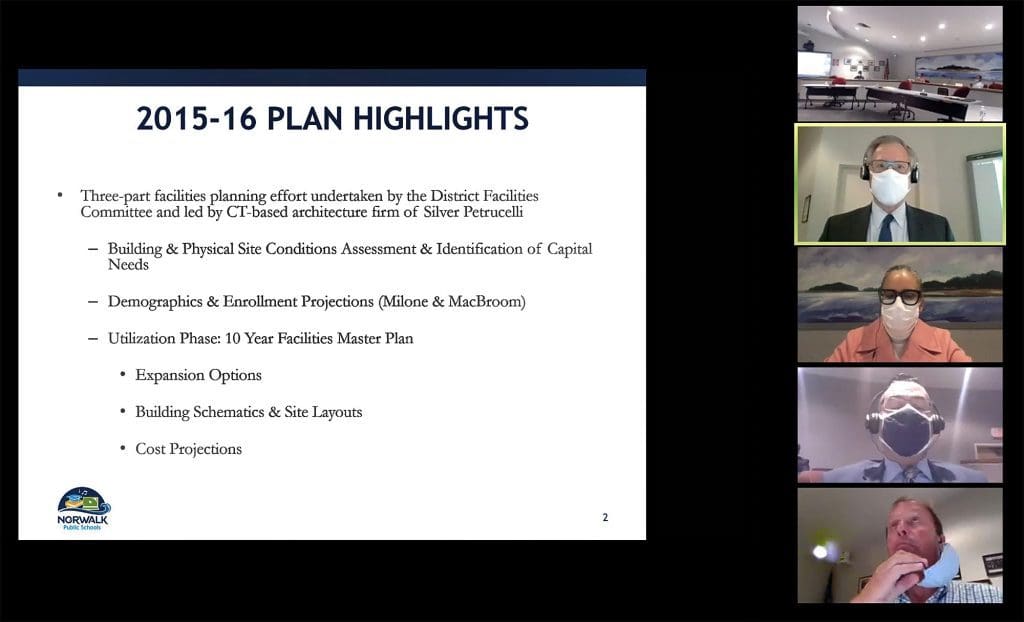 This is good. 10 year plans only live so long and 5 years into it, it’s probably a good time to craft the next 10 year plan based on current state.

Please keep in mind that in 2015 our bus budget was around $7 to $8 million and relative to other school districts we are bussing an extraordinary amount of students.

One of the ideas in 2015 was that more neighborhood choice schools could alleviate transportation costs.

This year’s bus budget looks to be about $12 million, of which a lot is covid related, but we simply can’t continue to spend millions of dollars on bussing children all over the city.

If we only saved $2 million a year it would pay for a brand new school all by itself taken over the life of the new building. Not to mention we have children spending 10 hours a week on school busses instead of enjoying enrichment programs at their local neighborhood schools after school.

Please, please keep this in the vision and plans.