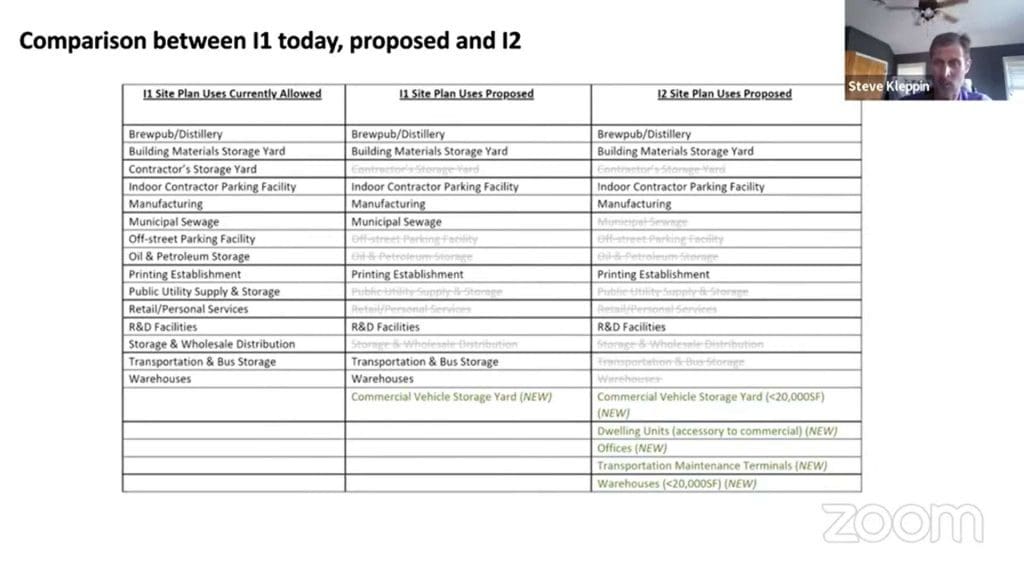 Advanced by the Common Council in August, the proposed changes would reduce Norwalk’s most intense industrial zone uses by 70%. The actual amount of industrially zoned land won’t change that much, dropping from 513 acres to 483, but the contentious uses are being yanked out of South Norwalk and moved to where they make more sense, on Muller Avenue and off New Canaan Avenue, where they won’t butt up against residences, Planning and Zoning Director Steven Kleppin said.

It’s a culmination of more than two years of effort as Utile, a Boston-based firm, was hired to do an industrial zone study of the city. The specific look at industrial zone uses stems from the 2019-approved city-wide master plan, or Plan of Conservation and Development.

“As is the case with most of Norwalk zoning regulations, it’s pretty confusing right now. The language is a little bit tricky convoluted, and how the zoning boundaries are put together is another problem,” Kleppin said at the Aug. 4 Council Economic & Community Development Committee meeting. In certain areas, “there’s no cohesion in the land use.” 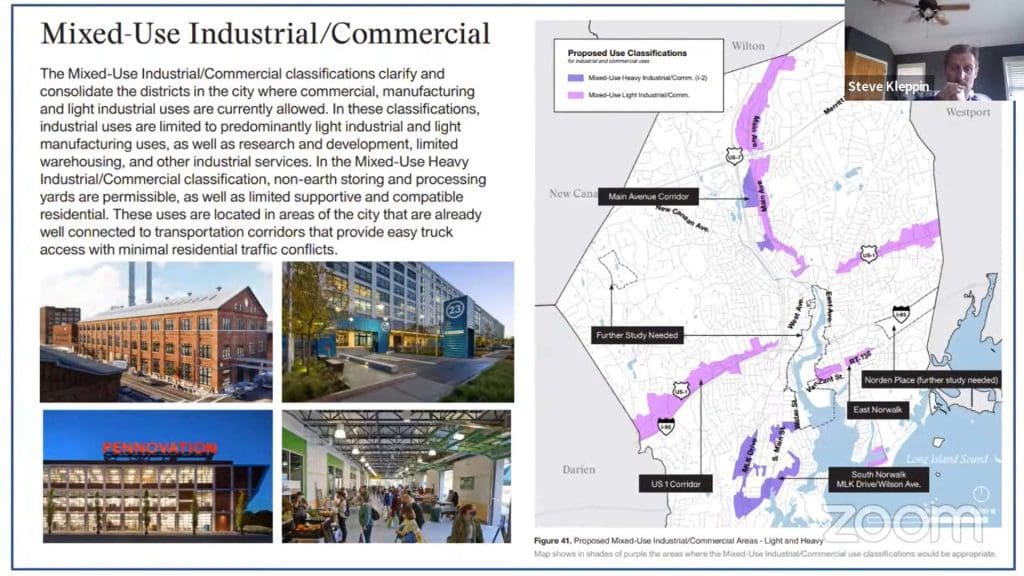 The proposed changes bring an increase city-wide in areas to park commercial vehicles.

“That’s one thing that we wanted to really distinguish in this study is, what’s the difference between somebody who’s operating a full-fledged contractor yard, where they’re having machines, sifting piles of dirt all day creating dust and creating noise … as opposed to like a plumbing contractor who’s got five or six trucks,” Kleppin said.

If you don’t provide space for those “benign” uses, then “they spill into the residential neighborhoods, and we’re constantly chasing them out of there,” Kleppin said. “…We always call it ‘whack a mole.’”

Existing non-conforming uses are grandfathered in as a matter of law, but the new zoning seeks to incentivize property owners toward uses that are more appropriate for the surrounding area, Kleppin said.

Even with the energy put into thinking out adjustments, “We can’t rectify everything that’s historically happened, but we can try to correct things over time,” Kleppin said. “…. There’s really like a 10-year timeframe is how things get implemented till you can hopefully see the bulk of the changes that you want to occur.”

Certain property owners will be grandfathered in with nonconforming uses, but “the new zoning provides incentives for them to do something that’s hopefully more appropriate and more fitting with what is going on around them.”

Norden Place would see more restrictive industrial zoning under the plan. Other areas, such as the wastewater treatment plant, will wait for a waterfront study to be completed to have their changes defined. 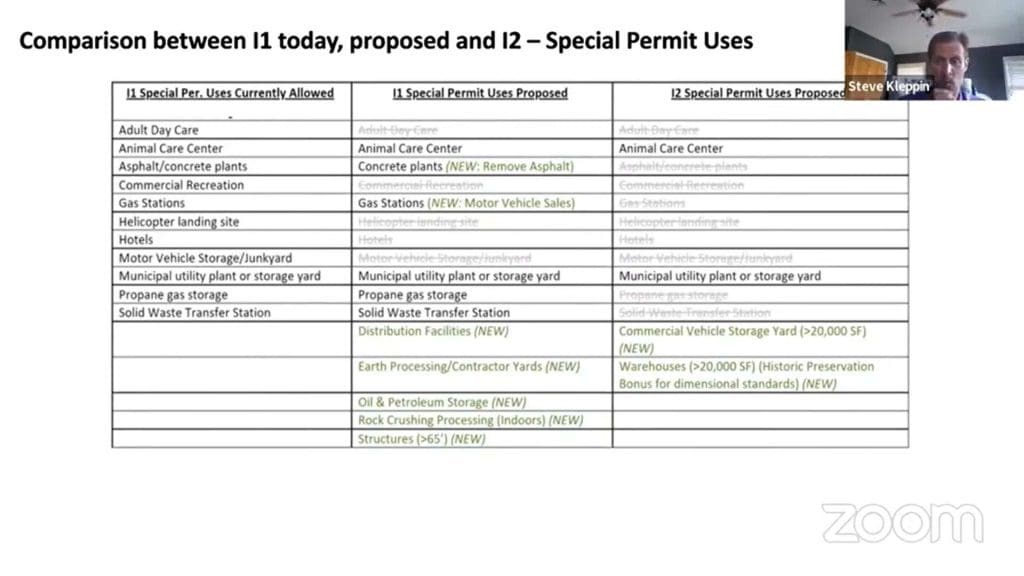 With South Norwalk a heavy topic of interest, Kleppin explained that only eight acres would remain as Industrial I if the changes are approved, down from 160 acres. More than 20 contractor yards would remain as legally nonconforming.

“There’s really zero impact to how they operate their business today,” Kleppin said. “We’ve actually offered up to some contractors, some language that would allow them to move things in and around their site.”

Proposed changes were already well along when the City moved to buy Meadow Street property as the site for a planned South Norwalk neighborhood school. In June, Planning and Zoning began making adjustments, taking the entire Meadow Street area out of the most intense industrial zone and making it Industrial II. 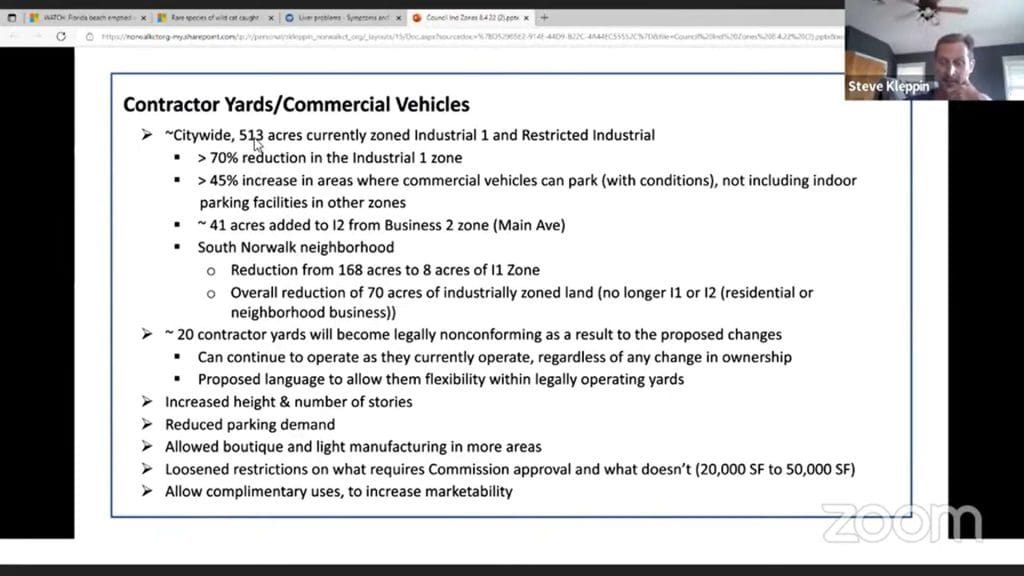 It’s one thing to change zoning but another to enforce violations, multiple people said.

Kleppin said in the last 10 years, P&Z has dealt with 229 complaints about contractor yards city-wide. Meadow Street had 13 complaints and Wilson Avenue had five, all boiling down to three or four problematic properties.

Things have changed at the Grasso property at 314 Wilson Ave., as “a lot of the things that he used to do which used to kind of run afoul of the zoning regulations he’s not doing anymore,” Kleppin said.

P&Z proactively inspects properties on a quarterly basis, Kleppin said. Plus, “we finally are at the point where we have a full P&Z staff again… you were very generous to us last budget cycle, we do have another position pending, I think that’ll be another body in the office which will free up a little more staff time to go out and look at these things proactively.”

Council members Nicol Ayers (D-District A) and Darlene Young (D-District B) said they appreciate the effort but South Norwalk residents won’t be getting much relief.

“I just think it is important for constituents to understand that Meadow Street, because of the historical nature of those parcels, there is not going to be much movement, and particularly on the arrow areas of Meadow Street that are the heaviest in the industry,” Ayers said. “…Even with these great improvements that are coming into the area, there are certain things that are not going to change.”

Violations enforcements lack teeth and while you expect folks to do the right thing, they’re not, Young said. “It’s not just about Meadow Street.  There are major violations in all little nooks and crannies within South Norwalk and we need to we need to have better enforcement.”

State Statute limit fines to $150 a day, Kleppin said, adding that sometimes the process is slower than people would like.

The unanimous Council vote to approve the study Aug. 9 came with a few observations.

“I’m optimistic with this commitment that we’ll be able to improve on the quality of life for residents who live near or close by to our industrial zones, and also, which was a big topic of conversation, is obviously the new school in South Norwalk,” said Economic & Community Development Committee Chairman John Kydes (D-District C).

“I remain concerned that the industrial zones study while it makes significant improvements that I really applaud, and I particularly applaud the changes to Meadow Street, and Wilson Avenue in recognition of the new school…

Council member Nora Niedzielski-Eichner (D-At Large) said she “really applauds” the changes made to accommodate the expected school and is “grateful” for the “ways in which the study as a whole really does strengthen and clarify the location of industrial activities around the city,” but “I think significant work remains to be done, particularly in the South Norwalk Meadow Street, Wilson Avenue area.”

She said further changes are needed for the school and the City needs to “be very strategic about the need to manage redevelopment in that area in such a way that the residents are no longer burdened by inappropriate environmental hazards.” 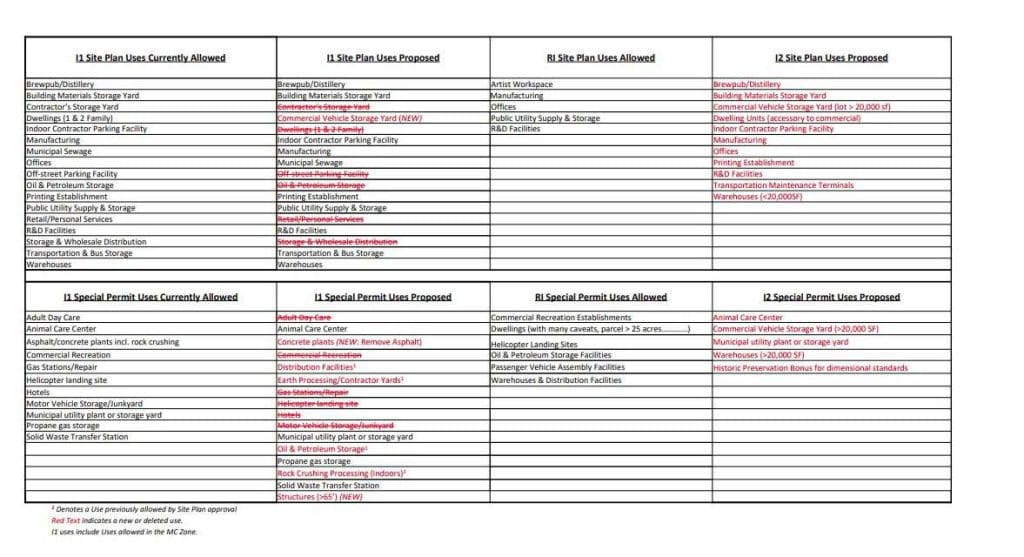 I guess this is good cleaning of South Norwalk I don’t know if all this motivation started from the new school at the old Hatch and Bailey Meadow Street site as part of the continuing gentrification of South Norwalk close to Rowayton and it’s good to clean up the neighborhood but it will just continue to push the poorer working people out of Norwalk. Maybe they’re expected to move to Martha’s Vineyard!?🥵 Eventually I iMagine Devine brothers will be bought out by O & G on commerce street, to make room for more waterfront apartments. I wish we had a more comprehensive plan for the Norwalk river and harbor. oh well life goes on and you can’t stop progress let’s just maintain the transparency politically speaking so we know where the moneys going😩🙈👍🏼🇺🇸

We have a long standing industrial area being transformed to a accommodate a poor site for a school.

@Johnny Cardamone: I seriously doubt that you are going to see many changes on the West side of the river from Commerce Street to the transfer station. First of all, there is no way that O&G us going to buy Devine Brothers and King Industries isn’t going anywhere, nor is the transfer station.

So the city is now going to allow the MLK area to be the parking lot for school buses for all the surrounding towns? Crazy. Towns should store their own buses. We should not be the parking lot for the towns of Darien, New Canaan, and Westport. Harry Rilling told me and John Igneri that the buses in that area would be temporary. Now with this, it will be permanent. Mike Mushak won’t approve a school but he is allowing south Norwalk to be the storage area for commercial vehicles and contractor trucks are okay? We also should be allowed outdoor parking for five to 10 plumbing trucks. It should be indoor warehouse parking.