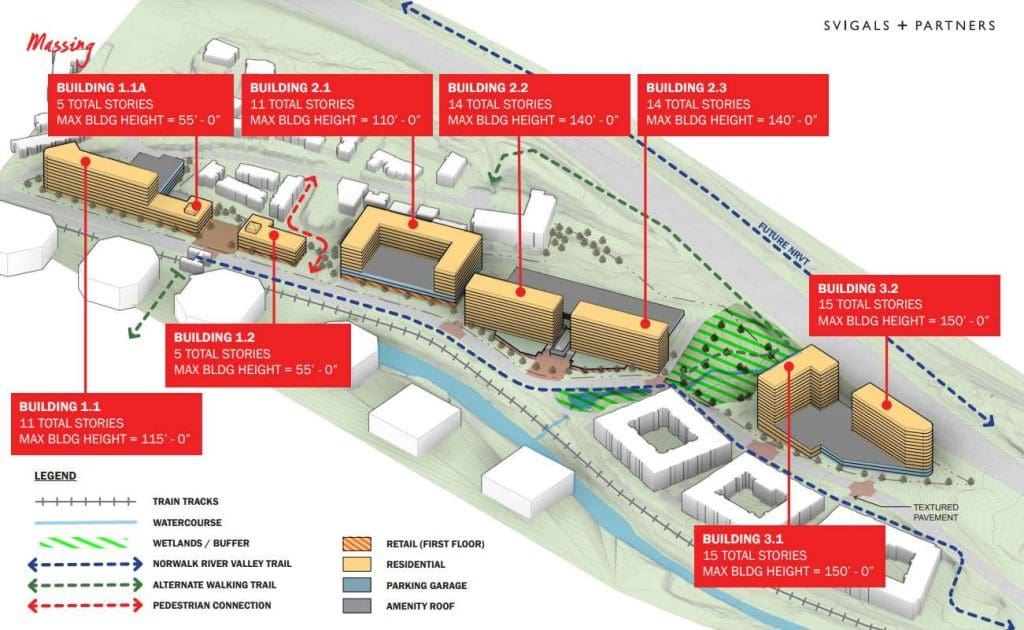 A rendering of the proposed Glover Avenue master plan put forth by BLT (Building and Land Technology.)

The Planning and Zoning Commission is set to discuss Stamford-based developer BLT’s proposed master plan for Glover Avenue at its Wednesday evening meeting on Zoom. It may vote on the plan, which would tentatively allow 1,290 apartments in seven buildings on the road’s western side.

If greenlighted, BLT would likely construct the first three buildings, with about 500 apartments, “relatively immediately,” according to BLT (Building and Land Technology) General Counsel David Waters. Further construction would hinge upon major traffic improvements under consideration by the Connecticut Department of Transportation (ConnDOT).

Also at Wednesday’s P&Z meeting, plans for mixed-use development with 77 apartments at 1 Cemetery St., the former Wells Fargo bank property on the circle near the beach, will get their first public airing.

The 1.66-acre parcel would be home to two new buildings with a public courtyard accessed through an internal loggia, that might include covered outdoor dining, according to the special permit application posted on the City’s website Tuesday. The bank would be demolished and the impervious paving removed, thus reducing stormwater runoff and “providing significant landscaped improvement to the existing asphalted area along the water’s edge,” along Mill Pond.

There’s a buzz about this proposal but documents were only posted online last week, excluding the actual application.

“We expedited their application in front of the Commission because they need outside peer review of both the design/architecture and traffic, so they gave us digital copies of just the plans, so we could get them to the Commission for review,” Planning and Zoning Director Steven Kleppin said Tuesday morning.

The project had opposition long before the application was made; it was mentioned at an August 2020 hearing on the East Norwalk Transit Oriented Development plan.

“Any redevelopment on that site, whether the regulations get changed or not, are going to improve that property,” Kleppin said at the time. “Because right now if you take an overhead look at it, it’s basically a sea of asphalt, which is not a very good use of the property.”

This is the last item on P&Z’s agenda. Commission Chairman Lou Schulman has a policy of keeping the meeting to four hours.

Opting out, even if the concept has merit

P&Zers are also holding a public hearing on accessory apartments.

“The State of Connecticut passed Public Act No. 21-29 (HB 6107) which revised Section 8-2 of the Connecticut General Statutes which pertains to Zoning. Included in the legislation are requirements and limitations for how accessory apartments or accessory dwelling units (ADUs) can be regulated by a municipality,” Principal Planner Bryan Baker explained in a memo to the Commission.

It takes effect Jan. 1 unless a municipality opts out – and that’s what P&Z is considering.

Among other things, the law requires local zoning regulations to

“ADUs help to provide affordable housing for both the property owner as well as the tenant by allowing the owner to monetize their property by charging what is likely to be less than rent at an apartment building. Accessory dwelling units can also be used to house seniors and younger family members nearby which helps aging in place, retaining youth and preventing displacement,” Baker stated.

Norwalk’s ADU regulation dates to the mid-80s and “is not achieving its goal of providing additional rental housing given that we only have approximately 259 ADUs on the books,” Baker stated. However, staff recommends opting out for several reasons. For one, “the consensus seems to be that 30% of the floor area of the single-family residence or 700 square feet, whichever is less,” and that’s less than the State requires.

There are also concerns about the setbacks and the height, potential design review and a goal of requiring periodic permit renewals.

Baker wrote, “Although Staff finds that most of the requirements of PA 21-29 would be beneficial to Norwalk, some further minor restrictions are recommended which would ultimately require Norwalk to opt out of the legislation to enact.”

Instructions to attend the meeting are included on this agenda:

ALL OF THE ABOVE IS DANGEROUS TO THE CITY. Where are the tree-planters on all of this? Drive thru the Cove Area of Stamford, or better yet drive thru White Plains…All of the projects mentioned above are a disaster in the making.
Our Zoning group is a freaking disaster.
Holy Cow – BLT has building sinking. They have balconies falling. They want to build 15 story monstrosities in Norwalk — Screw That!
Holy Cow#2 –Is Discala intimidating Kleppin? It sure seems that way. Doesn’t Kleppin realize East Norwalk residents don’t give a damn about how 1 Cemetery Road looks from the sky? AND, what the heck does that even mean?
This is freaking bizarre.
Holy Cow#3 — Accessory Apartments ? What’s that all about? Do these people actually give a damn about Norwalk? In my opinion, Bryan Baker has his own agenda and is not to be taken seriously.
Again, I ask: Where do the Tree-Planters stand on all this?

Related to the additional apartments on Glover Ave.
Has anyone considered the traffic impact on entrance to 95? I doubt it very much. The traffic on that entrance in the morning is currently a problem and dangerous. Additional apartments which are not needed will make 95 even worse.
Since our city government doesn’t care maybe the State should!!

Is this town run by crazy people.
Why would anyone think it would be a great idea to put 77 units on former Webster Bank property. Doesn’t appear to be even enough space for parking for each unit plus overflow for guests. Don’t even suggest on street parking or that “People can walk to the train station”, a comment that seems to appear in many of the P & Z discussions about any Norwalk property.
How much impact will there be on the wetlands and pond?

1) No more apartments for Norwalk. How many current vacancies are
there in all of the New Recently constructed apartments?????
2)Too much traffic. I 95, the Merrit and all other local roads and state roads are already clogged and backed up all the time. All filled, all the time over maximum capacity.
3) Taxes are already to high and this project will require more local taxes.
4) Not enough parks and vacant land for recreation How about an Indoor Swimming pool with removeable roof for summer?
How about an outdoor fitness facility with outdoor fitness machines like Wilton CT.

Has the City issued a “traffic impact study” on the new “renters bring growth”
apartments ? Or such studies not needed in Norwalk ?

Apparently, and as usual – Harry’s P&Z team of see no evil, speak no evil, hear nothing the residents say – has given this project the green light.

There really is only one question left. Is there ANY development that this city will say no to?

If we are going to fight fire with fire – I say – let’s cobble together a bunch of Houston Texas developers – and build a 100,000 sq. foot affordable housing tract on the land surrounding Tom Livingston’s house. Next up – buy the SoNo Boat club – and tear it down. Kayaks only. And so on. Take the fight to those who are enabling this – see how they like it.

I am moving to 399 Main Ave. on Nov. 14th. Thank you for your reporting about the Glover St. proposed construction. Very disturbing news as the beauty of the area is what attracted us to Norwalk and these building are anything but beautiful. I have been thru this before. My children grew up in the West Village of Manhattan before the developers moved in like vultures and ruined the area. Developers will never say enough and Norwalk is special and hopefully the zoning commission will reject this proposal.
Lewis