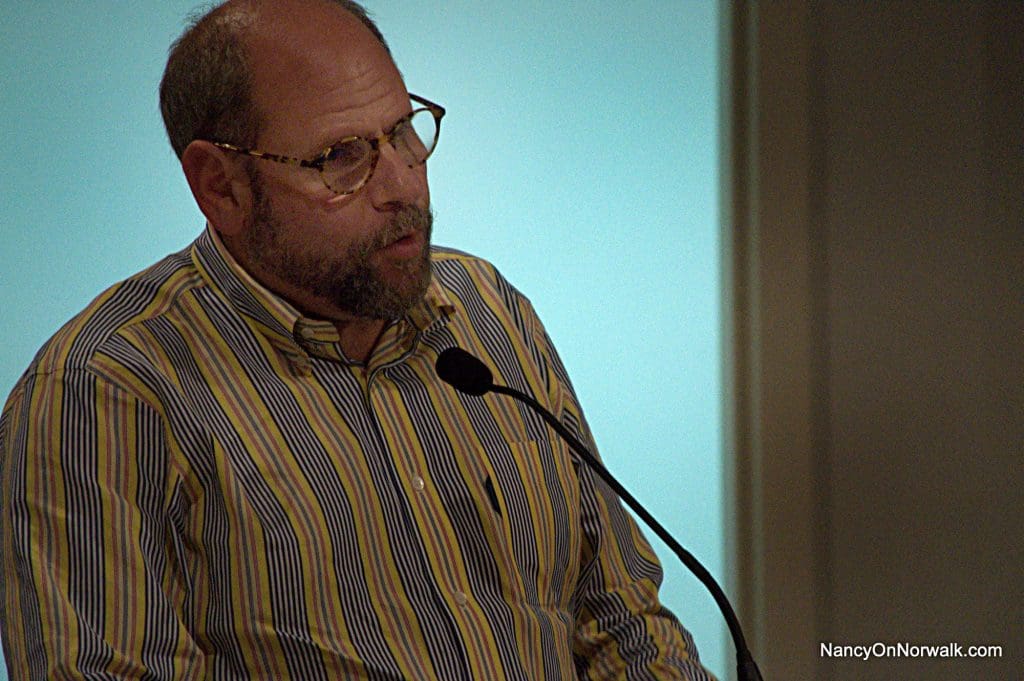 NORWALK, Conn. – POKO Partners ran the approval gantlet Tuesday and came out with its project intact: both the Norwalk Redevelopment Agency and the Common Council granted it an extension on the 10-year-old Land Disposition Agreement (LDA) for the Wall Street Place development.

The extension carries with it many benchmarks (or thresholds) that were negotiated by the Norwalk Corporation Counsel office, the RDA and Ken Olson of POKO Partners. The first of these is a 150 day benchmark in which Olson must show that he has attained the $13 million in private financing needed in addition to the state financing it has garnered, $5 million in tax credits to fund a complex underground parking garage. He also must get the permits needed for Phase 1 and a completed Phase 2 environmental assessment of the site and an environmental mitigation plan.

There was little comment. Torrano asked Redevelopment Agency Executive Director Tim Sheehan about the meeting he and Mayor Harry Rilling had with Citibank officials, confirming that the bank was in step one of a four-step process when that meeting occurred.

Sheehan went on to tell her that the bank was conducting pre-screening when the meeting occurred, although Olson had told the RDA and the Common Council that he would have preliminary approval by July 31.

Torrano asked Sheehan if Citibank would have an ongoing dialogue with Norwalk. The answer was yes.

The Council discussion was more involved. Councilman Bruce Kimmel (D-At Large) began it by referring to “loose language” in the LDA. The city would be backed into a corner if it declared POKO in default and might well lose the ensuing court battle, he said.

Kimmel began the first of three trips down Memory Lane, reciting the challenges that POKO has faced, including 15 months to get zoning approval “because of some appeals and the lengthy nature of our zoning process in general,” the economic crash in 2008 and the ensuing difficulty in getting financing.

“The financing for this project would always be more difficult than usual because it has what I consider an excellent affordable housing component,” Kimmel said.

Those things are real, he said.

“Wall Street is the heart of Norwalk and in any living body you need to have a healthy heart,” Petrini said. “… The heart of our city, Wall Street, is on life support and has been for a very, very long time.”

He said he shook hands with Olson, which meant more than paperwork written by lawyers.

“I have been waiting and waiting for a rebirth, for a change, some life,” he said. “Now it looks like it could and it might happen again.”

But Council President Doug Hempstead (R-At Large) cited his long history with the project as reason to say no.

“It’s like anything, you kind of kick the dog enough, the dog is not going to come when you call it,” Hempstead said.

Olson should have asked for the extension much sooner, he said. “I have lost my confidence in this developer to finish this project and that has been tainted by decision making because I think we are still doing nothing but delaying the inevitable,” Hempstead said. “…I am the dog that has been kicked too many times along the route with this thing and really I do not have confidence in this developer at all for a variety of reasons, even beyond what I said tonight.”

Olson addressed the oft-made comments about the lateness of the extension request before the council began discussing the matter. He assumed that he should have the financing for the project in place before requesting the extension, he said, because he thought he would automatically be denied if he requested an extension without funding.

Olson also said the project was originally designed as condominiums, but once the recession hit financing for that was impossible as the market bottomed out. It’s all rentals now, he said. That’s something Hempstead expressed disappointment in.

Councilman David McCarthy (R-District E) was also against the extension. “I didn’t know when I sat down in this chair tonight that the rock was here and the hard place was behind me,” McCarthy said.

He agreed with Kimmel that the LDA should have been written better but said the list of problems seemed to him to be excuses. If affordable housing makes it more difficult to get funding, that suggests that the market doesn’t support affordable housing, he said. McCarthy said he had heard the underground garage described as being silly and that he agreed with that assessment.

“I want to support it but I can’t,” McCarthy said.

Councilman John Igneri (D-District E) said he agreed with a lot of what Hempstead and McCarthy said, but “I feel we have to move forward, we have to do this, and I am going to be voting yes.”

That drew the closest thing to a shot the civility-minded Petrini has uttered: “You guys are a lot older than I am.”

Rilling continued, “We have watched as Wall Street has foundered and has become pretty much a ghost town that is no longer what the vibrant inner core of the inner city that it used to be, with people walking on the street. I think this project is something that will see that turn around. I’ve always been one that said, look, we have invested so much time and energy right now, don’t throw the baby out with the bath water, let’s keep it going and give that 150-day extension based on the agreement so that we can now make sure that we have done everything that we can possibly do to support the project.”

NORWALK, Conn. – POKO Partners ran the approval gantlet Tuesday and came out with its project intact: the Norwalk Redevelopment Agency has granted it an extension on the Wall Street Place development in a 3-1 vote, and the Common Council gave its nod, 9-5.

The extension includes benchmarks; if POKO does not have its financing in order within 150 days it will be in default of the agreement. It would then go to arbitration.

The last extension had benchmarks too.

@Chapman what does this mean? ““The financing for this project would always be more difficult than usual because it has what I consider an excellent affordable housing component,” Kimmel said.”

Wall Street desperately needs this development, though it is probably still a long shot that it will happen. Thanks to the Mayor for protecting our interests here having to deal with such a badly written agreement from the Moccia administration.

Nobody mentioned The Stock Exchange.

Let’s see where this project is in a 150 days… Sadly I think no where. I hope I’m wrong.

Regarding the relationship between affordable housing and funding, which was mentioned above:
.
Banks are generally more cautious when it comes to financing projects with sizable affordable components simply because those units reduce profit margins for the developer. I should add, however, that the inclusion of affordable units does enable developers to apply for various grants.

And everybody knows that the source of grants is the money tree.
.
Enough with affordable housing. Build some in Darien, Westport, Wilton, New Cannaan and then come back to me. We have more than our fair share.

@Kimmel, appreciate the explanation. It appears the sizable affordable housing component made it a poor investment for banks, and clearly the grants are not guaranteed or easily obtained. Under-ground parking additionally costly.

Making this deal ‘doable’, was that ever discussed?

We don’t need more affordable housing, we need less. We need more people in higher income levels in the city actually paying taxes, and less of the kind that need government hand outs. If you can’t afford to live here move south where costs are lower. Don’t make us subsidize your lifestyle.

Bill: Affordable housing is NOT for people who need government handouts. Please do some research before making inaccurate statements. Affordable housing (also known as workforce housing) is a tremendous benefit to young people just starting out in life. It allows them to rent at a lower rate usually 70 to 80 percent of market rate units so they can live in the community in which they work. This is totally different than low-income or section 8 housing.

@anon,
What’s lost in this back and forth (if I remember correctly) is that securing grants was part of the financing too. Banks would be hanging back until those were secured.

@rburnet, it doesn’t matter who is getting the hand out, if it isn’t market rate, taxpayers are funding the difference between the 20-30% discount you quote and the market rate. If you can’t afford to live in Norwalk, move to bridgeport or move south. Stop trying to control markets, it doesn’t work, look at Venezuela or soviet Russia for why market controls don’t work, or just look at our property values not rising and the wealthy moving out of state to appreciating areas that don’t feel the need to subsidize people’s housing.

@[email protected]
What’s lost in the discussion is that when we have a project with a subsidized housing component ( be it workforce, or other) is that the income and profit potential is artificially reduced from what the best market rate would be. In turn this reduces the value of the property MULTIPLICITIVELY. Which in turn reduces the assessed value of the property.

One project here and there does not have a dramatic effect. Do this on the scale Norwalk is currently pushing and you have the makings for a real estate tax nightmare with more and more of the tax burden being absorbed by fewer and fewer residences and businesses.

Another factor is the occupant of a subsidized rental unit has less disposable income by definition. This will have a corresponding impact on all surrounding business vs market rate residents.

Someone should put an electronic billboard near the corner of Wall and Issac St to countdown the days until this extension expires. 149-148-147-etc. I think it would draw public attention to the fact that POKO is seriously running out of time.

I don’t blame POKO or the banks, I blame politicians for trying to do good, but not realizing it ultimately hurts citizens, taxpayers, and jobs. Wake up and realize that this subsidized housing scheme is not working for the greater good.

@Ben,
Love it. Maybe it could even draw some advertising money. LOL

The developer is the one who wants 30% affordable housing as that is where he believes the market is in Norwalk – not the politicians or the city. Are you now saying that a private developer can’t do what he wants?

The developer wants 30% because that opens up those grants. OPM.

Let the market work, if the market could work, this project would have been green lighted years ago