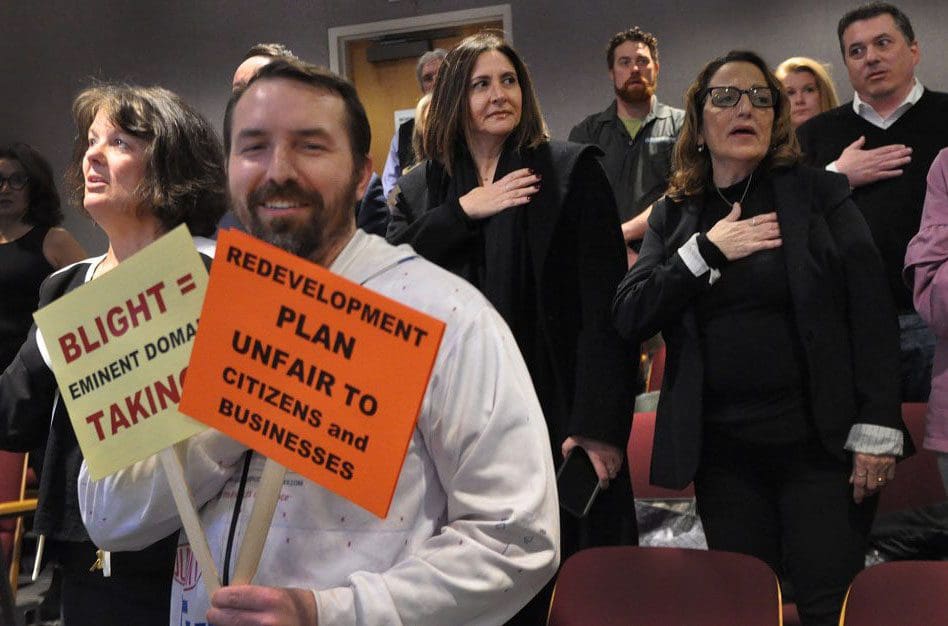 NORWALK, Conn. — Jason Milligan’s quest to invalidate the recently approved Norwalk Center redevelopment plan has taken a hit in a court ruling that tossed some of his lawsuit’s allegations.

The Norwalk Redevelopment Agency moved in April to strike six of Milligan’s 16 counts in the lawsuit he filed in March against multiple entities, alleging that the Wall Street West Avenue Neighborhood plan should be invalidated because the determination of “blight” was fraudulent. Judge Sheila Ozalis on Thursday struck, or dismissed, four of those six counts, ruling that the Redevelopment Agency qualifies for governmental immunity. RDA withdrew one of the counts in October and Milligan agreed at that time withdrew another.

Tort claims are allegations that an individual has been harmed by the action of another, and is eligible for damages, WolfandPravato.com states.

“The primary purpose of the lawsuit is to find that the 2019 redevelopment plan is void and unenforceable as a matter of law. Those claims were not stricken and remain in the case,” Rubin wrote.

You might be struggling to keep track as Milligan is involved in five lawsuits. Ozalis issued a ruling last week in the “main” lawsuit, the one in which the Redevelopment Agency and City sued Milligan for buying properties slated to be used in Wall Street Place phases II and III, known to many as “POKO.” This one was filed by Milligan, a real estate broker who sees himself as an activist using legal tools to effect change, to stop a redevelopment plan that many stakeholders objected to. Many complained about the blight designation.

Invalidating the redevelopment plan is also a major Milligan defense strategy in the main lawsuit.

Attorney Sarah McIntee, a Chapman Hyperlocal Media Board member who is not affiliated with the combatants in the case, said 13 of Milligan’s 16 counts are tort claims, and they were effectively dismissed by the ruling as it sets a precedent for the other defendants.

“Ultimately it seems likely that the tort counts will likely all be dismissed based on this ruling regardless of Defendant,” she wrote. “That is going to leave the declaratory judgment count and the Unfair Trade Practices Counts. I don’t know enough about the law or the facts to say whether he has enough to establish a case on those counts. But this ruling didn’t impact those and they still stand for now and the litigation can proceed on them. Time will tell whether these counts will remain as well but it seems they have plead them well enough to survive this stage of the pleadings.”

Milligan’s lawsuit, under IJ Group LLC, accuses Redevelopment of conspiring with consultants to cherry pick markers or characteristics to justify a state or federal blight designation for the area, making it eligible for a redevelopment plan. He also alleges Redevelopment acted maliciously and in bad faith when it distributed its drafted plan in February 2019, claiming that it was substantially different from the draft distributed earlier.

Rubin had argued that Redevelopment is not a “political subdivision” and therefore not eligible for governmental immunity.

A status conference was held Friday in the “main lawsuit,” in which Milligan is accused of unfair trade practices and interfering with a contract. Last week, Ozalis ruled against Milligan’s fourth attempts to dismiss the case, denying every argument made in a motion for summary judgement.

Ozalis is new to the case.

“Judge Ozalis is super smart and focused. She has come up to speed very quickly and she is making decisions and making things happen. She set out a tentative schedule today.

“The City plans to file their own motion for summary judgement in the near future. Seems like an odd idea (Waste of tax payer money), and unnecessary delay especially considering that the judge just ruled that there are issues of fact to determine.

“The motion for summary judgement, along with discovery and depositions will take time. The judge targeted February of 2022 to start the actual trial, which was estimated to take around a month. There is a chance that it may become a jury trial which would likely add to timelines.

“One other point of interest was that the judge mentioned that she is a fan of court mandated mediation for several reasons, and that could be on the table in the near future.”

Attorney Joseph Williams, representing the Redevelopment Agency, confirmed that the plaintiffs are planning to move for summary judgment, which would end the case in their favor without a trial. He declined other comment.

Milligan has been pressing for court mediation.

Attorney Marc Grenier said last week that fees for outside counsel in the “POKO” lawsuit were $865,023.73 as of Dec. 1. Redevelopment has paid another legal firm $5,000 to defend it from Milligan’s challenge to the Wall-West redevelopment plan.

I’ve previously made it clear in this space that I have not been a Milligan fan since the Library parking lot fiasco so I greeted this headline with satisfaction and would be happy to give the point to the city, However I take no joy in winning because the “Redevelopment Agency qualifies for governmental immunity” rather than because they are right and Milligan is wrong.
It’s time for Mayor Rilling to demonstrate leadership and if arbitration would be binding and the city’s lawyers are as competent as Milligan’s , bring the parties to arbitration.
Or, declare the eyesores a blight, condemn and demolish them and let’s have our Central Park.

The library is where my issues started with this administration.

I was badly mistreated by the city because of their own inaction & incompetence.

I hope you and others have realized the truth about the library by now.

If not, I would be happy to explain what really happened and how it has led to this.

Feel free to reach out.

Wasnt it nice when we had Woolworths, Howlands, Kiddytown, Sears, Greenbergs? Wall street will never improve. Ever since Wheels bus put their hub there it steadily declined. I wonder if the old Howlands still has the magic carpet ride in it? Lol

Jason,
Not the way I remember it but that’s short term memory, not my forte at this point.
Don’t mean to imply you did anything illegal or immoral, just looking after your own bank account and not very kindly to the city.
Be happy to hear your side, but not predisposed to change my opinion.
How do you suggest I reach out?

Everything changes. Wall Street is no exception. But the Wall/Main/West Ave area is the heart and soul of small business in Fairfield County.

And when last I checked it seems like big-business is continuing its steady moving out of Fairfield County due to high taxes, high-labor costs, and anti-business policies.

Norwalk is that worst house on the best street (I-95 Gold Coast corridor). And according to many of our “Norwalk Ruling Elites” and the blue cadre of old Time Norwalkers, Wall Street is the “worst house” in Norwalk. And therein lies the seeds of success.

The POKO fiasco aside, over the past decade nearly every commercial building in the Wall/West/Main area has been rehabbed, repositioned, or reconfigured in some way, shape or form to meet the demands of the burgeoning creative-small business community. This is a big reason we never agreed to the RDA takeover via a bogus blight designation.

Businesses moving in here are tech and media/arts based, creative, design oriented, cutting edge, and service based looking for clicks and social media hits. This market segment is piggy backing off the largest media market in the world (NY metro), and attracted by housing options and wealthy surrounding communities that can “support the arts”.

But thanks to an incredibly short-sighted redevelopment agency (not the current crew) SoNo has largely become a one-trick pony of gentrified housing supported by a limited strip of retail cool that never seems to cover the rent. Bottom line, the commercial rents are too steep but can’t be lowered as the buyers overpaid and the City’s parking policy is slowly strangling the area. Hence, the pivot to housing at the expense of office, the arts and creative types.

Surrounding towns lack the gritty edginess and are way to expensive for office, retail or industrial space.

Milligan gets this, pretty much everyone who invested/moved down here gets this as well. Sadly, our “ruling elites” still don’t see what we see.

Check out the weekly news letter put out by the Wall Street Neighborhood Association.
http://us20.forward-to-friend.com/forward/preview?u=ce889e0a339518a4ba7fb9b9a&id=775f2df854

What a succinct intelligent comment. You could not be more spot on.