Price has ‘gone up enormously’ 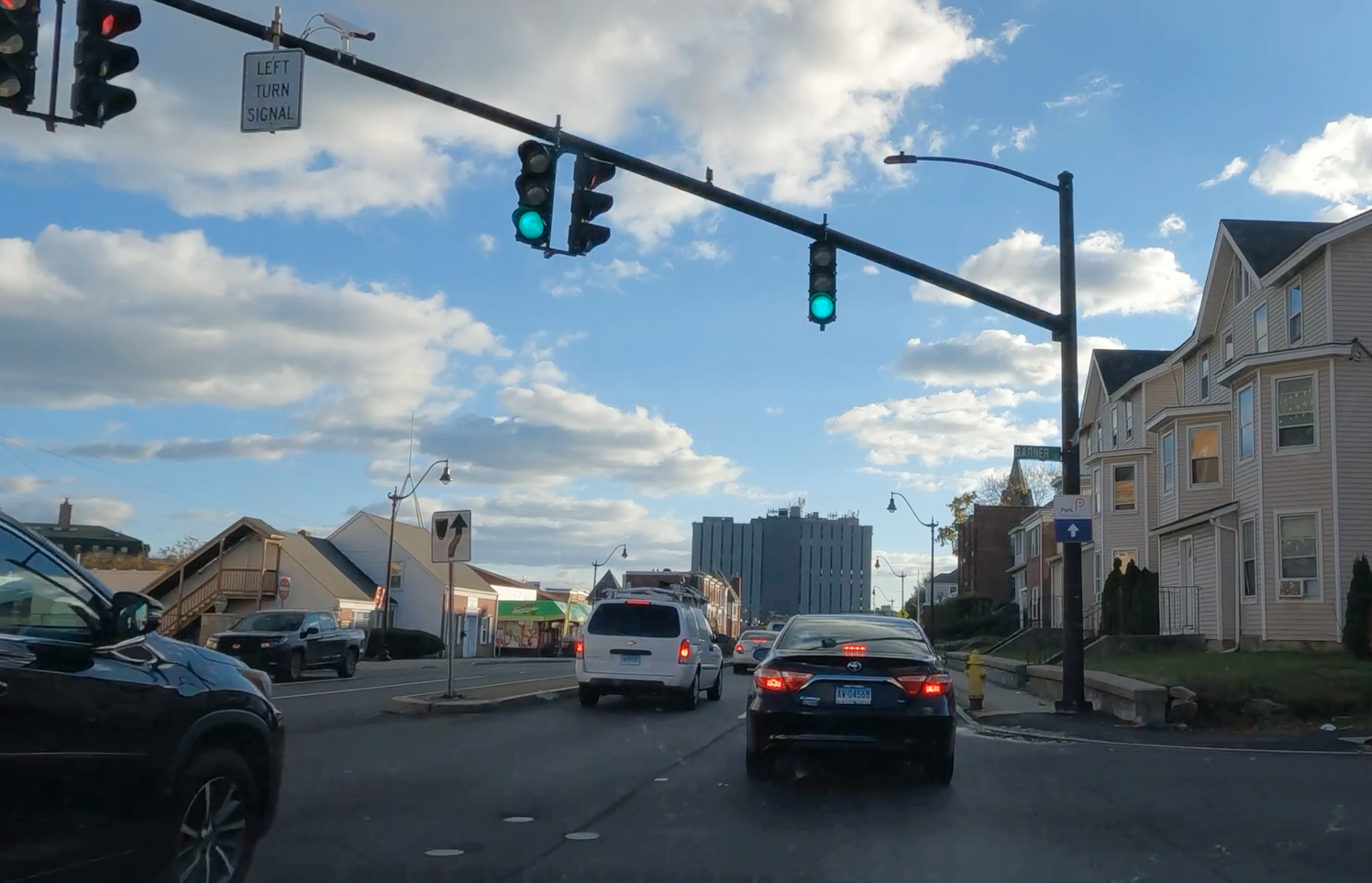 The traffic signal at Garner Street and West Avenue.

NORWALK, Conn. — Four Norwalk traffic signals are set to be replaced with Federal money in a $3.4 million contract approved Tuesday by the Common Council:

It’s the $700,000 per traffic light price tag quoted by Transportation, Mobility, and Parking (TMP) Principal Engineer Mike Yeosock at the Jan. 3 Public Works Committee meeting that’s raised eyebrows. “The price of signals and the price of steel has just gone up enormously in the last two or three years,” Yeosock said, when asked about the expense by Council member Nora Niedzielski-Eichner (D-At Large).

Ferguson Electric Company won the $3,125,192 contract, funded through a Congestion Mitigation and Air Quality grant from the Federal Highway Administration, administered by the Connecticut Department of Transportation.

The traffic signal at Eversley and West Avenues.

That pays for conduit, controllers, new mast arms, six signal heads, video detection and communication back and forth with the Department of Public Works system in City Hall, Yeosock said.

Bryan Meek, the lone Republican Council member, cast the only vote against the project Tuesday.

“I’m just against spending $850,000, regardless of it’s Federal or State money, on simple projects, much smaller than a house,” Meek said. “I don’t know where the money goes. I don’t think it’s a Norwalk problem. Those lights are serviceable now. And it’s just, it’s a lot of money for the State to be allocating for that.”

Mayor Harry Rilling said he was very pleased about the light being replaced at Grace Baptist Church as it was “knocked out of service several years ago. A lot of people from 20 North Main St. need to cross the street there to get to the grocery store or to get to the church itself. I think this is something that’s much needed.”

Yeosock said the State’s Walk Bridge program is replacing East Avenue traffic signals at Myrtle, Fitch and Winfield Streets, which will synchronize with the one at St. John.

It was hoped that the light at Newtown Avenue and Allen Road would also be replaced but rising costs made that $397,396 expense infeasible, Yeosock said. The overall project was originally expected to cost $2.7 million and the State came up with the additional funds.

Also ditched was a plan for diversionary LED signals. Presented to the public in 2019, the 12 electronic traffic signs were intended to reduce cut-through traffic in local Norwalk neighborhoods and expected to be installed in 2021.

“The administration didn’t want those added to the project,” Yeosock said Jan. 3. “They felt that, you know, it put state traffic on city roads.”

“The Department of Transportation, Mobility and Parking continues to review every grant application to ensure we offer the best and most current solutions for Norwalk residents,” TMP Director James Travers said Wednesday. “Our Department discussed these signs with the Administration, and we shared the same concerns, that these signs would be too large (over six feet in length) and would not add aesthetic value to our neighborhoods. Additionally, the signs were intended to move traffic diverted from the highway to city roads, and we were concerned with the impact this would have a local traffic.

“Since the grant was submitted several years ago, newer technology has emerged, such as Google Maps, where drivers have grown to rely on apps such as this rather than diversionary signs,” he continued. “Furthermore, technological advances in the traffic signal industry offers similar outcomes that better align with our goals, without the large signs.  The new adaptive technology that we are installing will position the City to manage changes in traffic patterns more effectively and be able to automatically respond to any type of event.”

Editor’s note: Director of Transportation, Mobility, and Parking James Travers has responded to this article with a letter to the editor, explaining project costs. You can read it here.

Kudos to Mr Meek. Why be fiscally responsible? All the council seems to do is spend spend spend. We are paying Hatch and Bailey 14 million for a property valued at 8 million. Why stop there?

We disagree on a lot, but I suspect Bryan’s right on this one.

https://trustedinformer.com/how-much-does-a-traffic-light-cost-cost/#Public_Traffic_Lights
A quick search here says that traffic lights can cost anywhere from $80k to $500k to install, based on the complexity. I’m assuming that “complexity” means whether it’s 2-way or 4-way, number of lanes, etc.

Thank You Bryan for once again actually WATCHING where our money is being spent and asking the questions that must be asked instead of just Rubber Stamping like the rest of the CC does.

Keep up the good work. Who knows, it might embolden/motivate your colleagues on the CC to follow your lead of protecting the taxpayers’ interests by asking the hard questions.

@Tysen – Property tax valuations aren’t market valuations, they’re only an approximation. My last apartment was valued at $110k for taxes, but sold around $130k if I recall.

The Hatch & Bailey deal may have been corrupt or overpaid, but the valuations in and of themselves aren’t what proves that fact.

I just looked up the cost of doing this depending on complexity it’s anywhere from on the low side 70k on the high side 550k per intersection light system group. The physical component costs aren’t all that large and we’re replacing existing equipment so where is the cost coming from the cost on the high side is based on an area with no existing infrastructure or communications capabilities neither one of those should be an issue in this install asking a couple of people in the business not in this state but in nearby States namely New Jersey and Maryland I also checked in Virginia and New Hampshire $200,000 intersection was an average consensus for replacing existing equipment and I provided some details via Google maps and this article so why is this project over a million.

@Michael McGuire – your optimism is appreciated, but unlikely. Bryan goes beyond “accountant” level skills, as it’s not just about the number – it’s about financial management. What is the benchmark – what is appropriate. Here, he is more like a CFO than a GAAP expert.

No Michael – the real dream is a change in what the electorate values. Imagine if council members were rewarded for vigilance and proper due diligence over taxpayer money, rather than filial piety to the mayor. I can only assume it is related to having skin in the game. If you pay little to no direct property taxes, who cares how they spend it – it isn’t yours. No – Norwalk will get the council it deserves when council members pay with their seats for not giving a damn about our money.

A traffic light which needs to either be reprogrammed or replaced is at the corner of Broad St & Main St. When traveling northbound on Main St approaching Broad St, the left turn arrow is not displayed to stop oncoming traffic until shortly before the light changes red, instead of at the beginning of the cycle, therefore blocking northbound traffic in the left lane. It would make much more sense for the left turn arrow to be at the beginning of the cycle so left-turning traffic could clear the intersection, like the vast majority of traffic lights. Even better, program it to display the left turn arrow at both the beginning and end of the cycle, like the one going northbound on East Ave turning left into the huge medical center at 148 East Ave. If it makes sense to have one for what is essentially a driveway to a private address, wouldn’t it make sense to have one at a major cross street between Main Street & Silvermine Avenue as well as New Canaan Avenue?

@Russ. Not to worry, we’ll shoehorn BJs into the vacant lot before realizing the traffic nightmare that already exists there. Then the Duffster will come to the rescue with $10 million in free money needed to build a turn lane and get the light working. This is how we roll.

If the price is exorbitant for what the work requires why aren’t more companies—even union ones bidding? If the actual costs are under $500k per intersection than this company will make a cool 1.4 Mill—. Is this a problem with the bidding process? OTOH, maybe $850k is closer to the real cost. If that is the real cost and the area needs a new signal then what is the cost of NOT having it… One significant car/pedestrian accident would cost the City many multiples of $850k. Is Bryan Meek simply trying to make a point by being inflexible or would his policy possibly lead to a bad accident (note there were at least 3 pedestrian deaths in Stamford in the past year) that could cost the City $$$$$ and lead to immeasurable human loss.

@SB. You mean like the brand new lights at Westport ave and East ave that go on the blink a few times a month? The lights work and could be reprogrammed for a fraction. But with FREE money, the first reaction is to spend it on new stuff instead of maintaining old.

@bm —- if that’s true then it’s incredibly wasteful. Please show the evidence that the currently existing traffic signals could be reprogrammed for a “fraction of the $$$” and that once completed they will largely work the same as the new traffic lights. Nobody wants $ to be wasted- just be transparent. If the new traffic lights are qualitatively different (and better) then maybe it makes sense to replace and upgrade as opposed to fix. It sounds like you are privy to information that is not available to the rest of us.