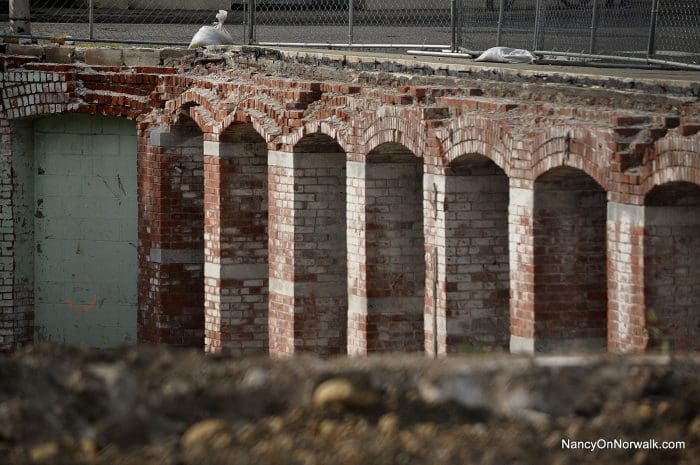 There is no way to save the Roman arch-like structure revealed by the demolition of the former Merchant’s Bank, Ken Olson of POKO Partners said Wednesday.

NORWALK, Conn. – Skepticism abounds even if there are signs of at least something being done at the long-delayed Wall Street Place.

To that end, Common Council members say they are scheduling a meeting to be ready if Ken Olson of POKO Partners does not get the construction loan he predicts will close on June 26 or 29, to discuss what would be a default of Olson’s Land Disposition Agreement (LDA) with the city.

Olson says it won’t be needed.

“Depending on where were are at, if he gets all his financing before the 30th and all approved then I guess we are done,” Planning Committee Chairman Doug Hempstead (R-At Large) said. “If not, it will go as an action item on the agenda. It will be listed as a possible executive session, because that is where the attorneys are going to determine, we will listen to them.”

Last Thursday, Olson said, “We will start digging tomorrow and we won’t stop until we are complete.” Work did begin Friday, with what some people would call minor progress. Mayor Harry Rilling said he was “very confident this phase will move forward to completion with no further delays.” 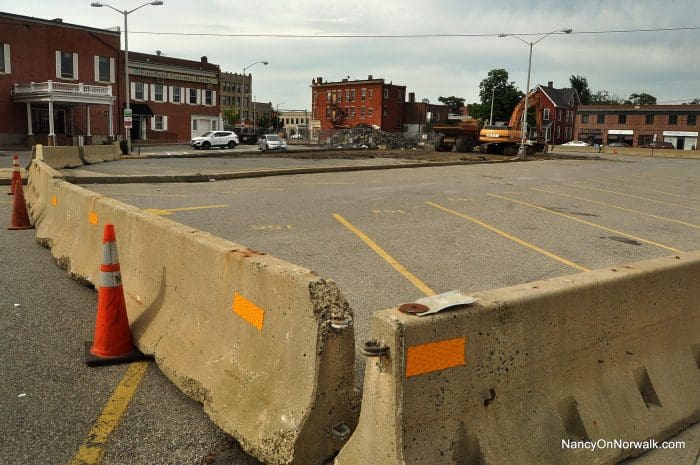 Access to the parking lots that were transferred to POKO Partners by Norwalk as part of the Land Disposition Agreement (LDA) has been cut off.

On Wednesday, the pile of crumbled parking lot had grown much bigger. It’s not possible to park behind the demolished building anymore because the parking lot has been sealed off with jersey barriers.

“They dug this parking lot up just to piss everybody off,” a man going into the neighboring bank said. “They did that to satisfy the people. They’re not going to do anything.”

He said he goes into the bank every day, and hadn’t seen much work being done.

“Three years from now it will still be a hole,” he said.

“These people have no idea what they are talking about. We will close our construction financing and they will eat their words,” Olson said in a Wednesday email.

Hempstead said it’s rumored that Citibank may be changing the dollar figure on the loan.

“We’ll believe it when we see it,” Councilman Rich Bonenfant (R-At Large) said. “I don’t want to discourage anybody from what they are trying to do. We’ve waited long enough and some deadlines are coming. We’re going to have a Council meeting on the 30th to discuss it.”

“It has been a way underfunded project with a totally stupid idea about parking,” Hempstead said.

That’s a reference to the automated underground parking garage that’s planned. Hempstead said that would work in downtown Manhattan but this is Norwalk. It wouldn’t even do well in Stamford, he said, adding, “The ironic part I get about this whole thing is the state is really bailing that out by providing $5 million in funding by bonding strictly for that parking garage.”

While I do not think the city should attempt these types of redevelopment projects in the future, one key lesson learned is that proof of financing should be part of the developer approval process. Just one more blunder by the Redevelopment Agency.

Moreover, the Redevelopment Agency needs to be held accountable for the failure of the Poko and 95/7 projects at least in regards to the years of lost property tax. Heads should roll. The Redevelopment Agency’s ~$10mm slush fund should be returned to taxpayers, and the Agency abolished or overhauled and downsized.

If any homeowner did this to their property, they’d be subject to the blight ordinance. I really hope this doesn’t stay like this.

I’m amazed that Tod Bryant of the Norwalk Preservation Trust has been totally silent on this project. Just look at that Roman arch-like structure in the picture. It’s in a historic district. At the very least those bricks should be salvaged and reused in a manner that preserves Norwalk’s heritage.

They’re still planning a robotic parking garage? Honestly, I agree with Doug Hempstead, that is one dumb idea.