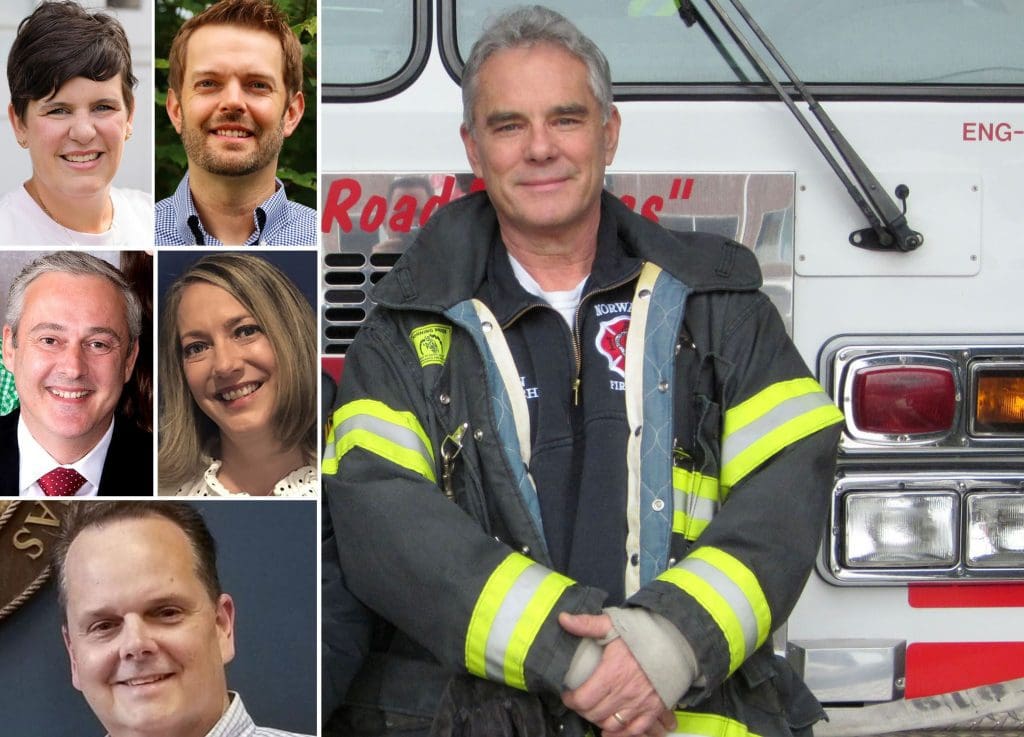 The 2021 Election is Nov. 2. The results of Tuesday’s District C Democratic primary will be recounted Friday. A second primary is possible.

NORWALK, Conn. — Norwalk firefighters have thrown their support to District C Republican Read Auerbach in his quest to be elected to the Common Council.

Auerbach’s opponents in the in-district race may be determined Friday in a recount of the Democratic District C primary results. If the tie between incumbent Council member John Kydes and newcomer Tyler Fairbairn, who both came in second to Jenn McMurrer in the primary, isn’t broken, there could be another primary in three weeks, Norwalk Chief of Staff Laoise King said.

There are two in-district seats available. Jennifer McAllister was fourth in Tuesday’s primary.

Norwalk Democratic Town Committee Chairwoman Eloisa Melendez and Wells haven’t answered emails asking what happens if the recount doesn’t break the tie between incumbent Council member John Kydes and newcomer Tyler Fairbairn, who both came in second to Jenn McMurrer in the primary.  There are two in-district seats available. Jennifer McAllister was fourth.

“Your commitment to Norwalk & your community is appreciated & we support your incredible efforts & know you will continue to do great things for Norwalk,” the announcement said.

Auerbach, a native East Norwalker, has been with the fire department for 43 years, his bio states. He’s a Vietnam veteran who still lives in the home he grew up in, is Third Taxing District treasurer and on the board of the Marvin Beach Association, and is a former East Norwalk Improvement Association board member.

Scott Goodwin is also running, under the Independents for Norwalk banner. He’s a small business owner who had a 25-year career as a corporate marketing executive in advertising and product management, and an East Norwalk Neighborhood Association member, his bio states.

McMurrer and Fairbairn say they were first inspired to seek the Democratic endorsements for Council when Kydes and Council member George Theodoridis (D-District C) didn’t reply to their inquiries regarding the Council’s cut to the budget recommended by Norwalk Chief Financial Officer Henry Dachowitz this spring. That $1 million reduction came out of the schools budget.

The primary results, according to Wells, were:

There were 392 ballots cast, 11 by absentee ballot, tapes from tabulators showed.

According to State Statute, if there’s a tie in a primary and it’s not broken by a recount, then there’s an “adjourned primary” in three weeks.

King said Norwalk would have an adjourned primary if there aren’t two clear winners of the recount. Unless one candidate drops out.

Wells has set up an unprecedented level of transparency in the recount, with camera broadcasting images of the questioned ballots and a Zoom broadcast of the overall scene.

He explained the recount process:

“The recanvass of the District C Democratic Primary for Common Council is tomorrow, Sept. 17, 2021, at 10:00 a.m. and will be held in the Community Room at Norwalk City Hall, 125 East Avenue, Norwalk.

“The event is open to the public and especially to the candidates and the news media. We have two cameras set up to record the recanvass and to project it onto the large screen in the Community Room. One camera will be focused on the workers and tables, and another is set up for close-ups of any ballots discovered which might affect the results, i.e. which would be counted differently by people than the tabulator.

“At the same time we will be conducting a Zoom session with a different camera focused on the workers and tables where the ballots will be processed. The information for joining the Zoom session is below.

“The basic process of a recanvass is to check all the ballots voted in the primary to see if the primary night results are correct and identify any ballots which contain votes that the tabulators might have missed. The tabulator can only count the “filled in ovals” on the ballot, but recount officials are able to take voter intent into account. One possible example of this would be a voter who circled the names of his chosen candidates (intending to vote for each of them), but one or more of the circles missed going through the ballot voting oval (which would mean that that choice would not be counted by the tabulator).

“We have priority chairs set aside for the District Candidates and the press, plus room for interested members of the public. No one can touch the ballots except the recanvass workers, and no one may interfere with the recanvass process. The close-up camera will help the candidates and audience to get a good view of any questionable or interesting ballots.”

Town Clerk Rick McQuaid said, “Stuart and his staff have taken the recount to a new level for all to be part of the process of the recount.”

To watch the recount

Correction made, 11:58 a.m.: Read Auerbach is a former ENIA board member.

This looks like it’s going to be an interesting race in November. Auerbach has a strong following. Not sure what to make of the two newcomers. They seem overly motivated from just an unreturned email and Kydes must have really stirred the pot by wanting to be Mayor if the Mayors Chief of Staff is this involved. I’ve been reading Nancy for years and never seen such coverage on an individual. Makes me wonder what’s really going on behind the scenes

Read will be an outstanding Council member. He has deep roots in Norwalk. He is a class act – reasonable, hard working and focused on serving others.

Read is a very nice guy who would bring additional Common Sense to our Common Council…Good Luck!

East Norwalk voters will have plenty of candidates to choose from – including an Independent (Scott Goodwin) not beholding to political ideology, special interest, or having to kiss the ring of the mayor – but as an East Norwalker, looking out and speaking up for what is best for the neighborhood. Teddy Roosevelt once said, “If you could kick the person in the pants responsible for most of your trouble, you wouldn’t sit for a month.” Norwalk residents are responsible for allowing our local government to give our city away for the past 8 years – along with a complicit and rubber stamp common council. Unfortunately, municipal elections don’t draw the turnout presidential ones do – which is sad, since one’s vote matters far more locally than at the national level. Good luck in your voting East Norwalk, because a lot more apartments and 18 wheelers could roll down Strawberry Hill Ave or East Avenue over the next couple of years.

Read would be great to have on the council. He is down to earth and understands Norwalk as good as anyone! Vietnam vet and 43 years with NFD. That says a lot people. Good luck Read!

I’m always dismayed when anyone dependent upon union representation and collective bargaining, like airline pilots, teachers, firemen and police, vote Republican, the party of union-busting. The only reason we ever had a true middle class once, not one “fronting” with credit, was thanks to unions (and yes, like any human endeavor, there was corruption). Even union-buster Ronald Reagan was a union president when it benefited himself.

Eddy O’Dispair: You really need to do a reality check. The captains of the Tech Sector and Wall Street are not Republicans and contribute vast sums of money to the Democratic Party. Speaking of the working folks, check the manufacturers label on your iPhone and ask Tim Cooke why it is made in China and not in the USA.