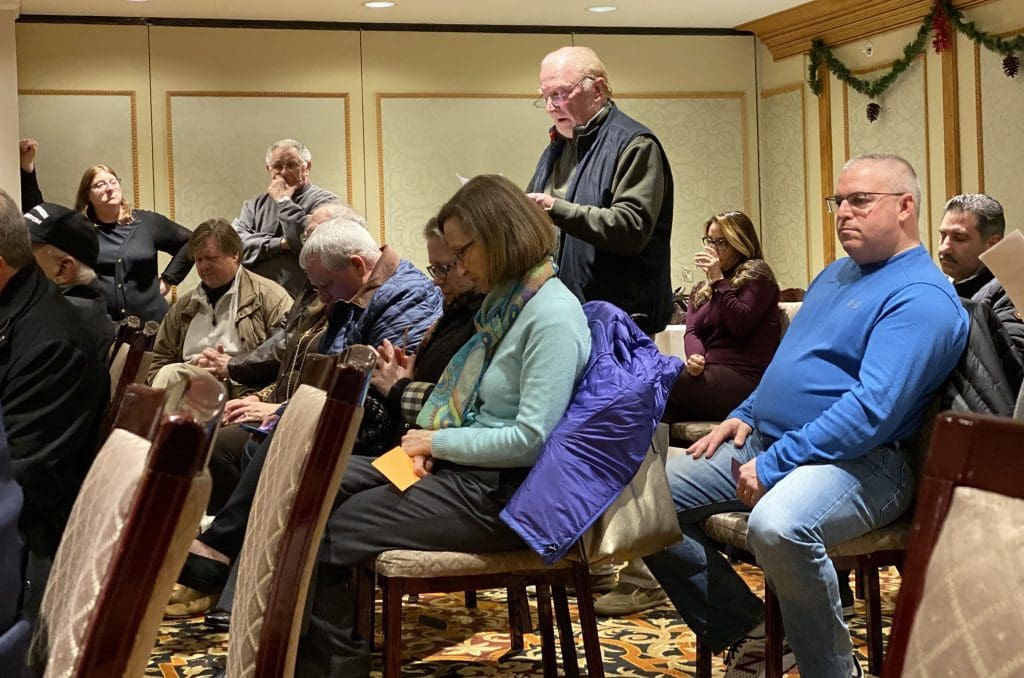 Jim Feigenbaum, of District E, reads off his District’s candidates for the Republican Town Committee, Monday in the Norwalk Inn. (Kelly Kultys)

NORWALK — More than 55 members of the Norwalk Republican Party endorsed the next set of Republican Town Committee (RTC) members on Monday night.

The RTC is responsible for endorsing candidates for election and appointing replacements for Common Council members or Board of Education members who resign. Committee members are selected by district and each of the five districts can have up to 20 members, according to committee rules.

At least 86 committee members were endorsed at Monday’s meeting, according to the preliminary list of candidates announced. One more candidate could still be added to District E, according to Mark Suda, the chair of the Republican Town Committee, before the final list is submitted to the Town Clerk’s Office on Wednesday afternoon.

Norwalk Republicans have suffered devastating defeats in the last two municipal elections, winning only one Common Council seat out of 15 and no Board of Education members, in both elections. Some see their 2019 endorsed Mayoral candidate, Lisa Brinton, as having done better than 2017 candidate Andy Conroy, as Democratic Mayor Harry Rilling did not pick up the six percent of the 2017 vote that went to a Democratic opponent in the four-way race. Brinton is unaffiliated.

“Over the next election, this year and next year, I think there’s going to be a major turn,” Suda said. “I think people are actually waking up and they’re watching what’s going on on TV and they’re not happy at the national level and I think it’s trickling down to the state and local level. Over the next two years, I think there’s going to be a big turnaround and I think the Republicans — I think people are going to start voting for who they think is the best person for the job and not just the party line.”

The preliminary list of RTC members does not include former RTC Chairman Victor Cavallo:

Both Republicans and Democrats will choose Party leaders in March.

Very excited to be a part of this team! Let’s give Norwalk back to its residents!

GOP needs to make a HUGE push for Latino representation..That is the key to gaining a place at the political table in Norwalk. Think about how poorly they’ve been treated by Dems. ELL funding is a disgrace. Every appointed position lately by Dems has been non-Latino..Step Up or Step Out..Times are changing.

Absolutely agree with John O’Neill. The Latino community is city wide, not just District B any longer. By and large they are family oriented, God fearing, church going, hard working, many business minded. La Familigia. They pay taxes, and receive little from what they pay. ELL is a pressing example.

As Chair of District D I welcome any outreach to be a part of the NRTC. Please come join us and help make a difference in the city where you live and are raising your families. Your input and presence would be welcome.