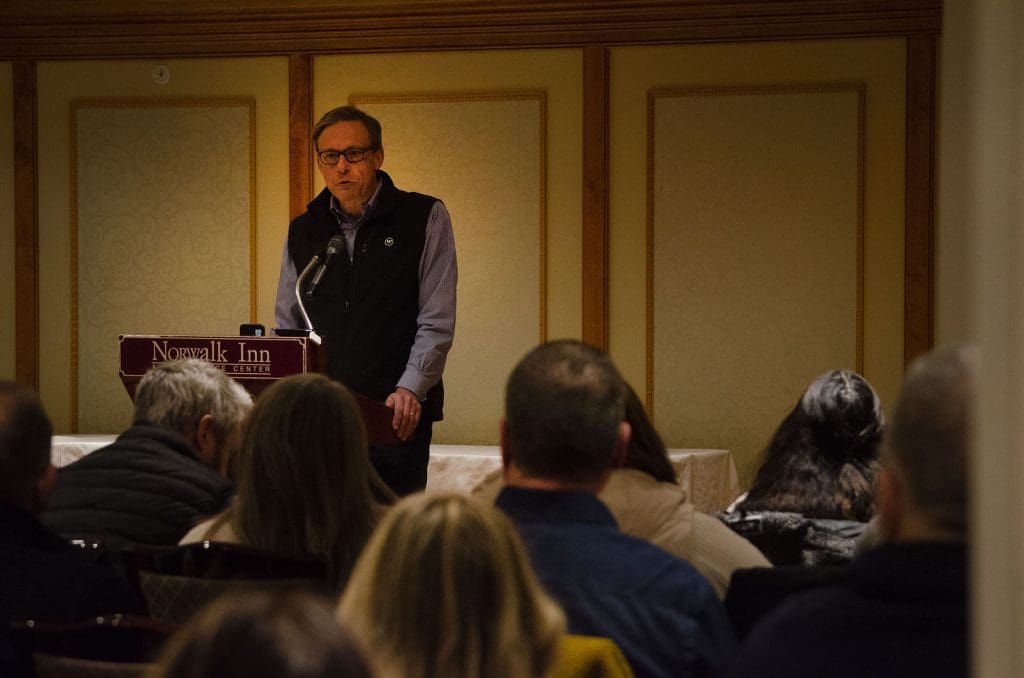 NORWALK, Conn. — Norwalk Republicans expressed hope Monday as they elected Fred Wilms to lead their party for the next two years.

“We have opportunities in this election. Polls show that. Alright, so this is the chance, this is the comeback. This is it. But it’s only going to work if you work,” former Common Council member Doug Hempstead said.

Wilms said afterwards that he stepped in a year ago because “a lot of folks were leaving town, the party was like, there was a kind of a doldrums. And I felt like I just couldn’t sit on the sidelines and watch that happen.”

Norwalk Republicans have taken a shellacking in recent elections. Democratic Mayor Harry Rilling has cruised to reelection four times and in 2015, Democrats took over control of the Common Council, with 11 seats on the 15-member board. There’s only been on Republican on the Council since November 2017 and none on the Board of Education since November 2019.

State elections haven’t gone well for Norwalk Republicans either. Wilms was unseated from his District 142 State Representative seat from Democratic newcomer Lucy Dathan in 2018, an election widely seen as a reaction to Donald Trump being elected President two years earlier, and failed to take it back in 2020. Democratic candidate Stephanie Thomas won the State Rep. seat in District 141, long a Republican stronghold, two years ago.

Wilms said Monday that Norwalk Republicans have “made some good progress” in the last year.

“I think we’ve got some momentum. We’ve got some energy. And we got new people stepping up,” he said. “So I was asked if I would stay on and I said, ‘Sure.’” 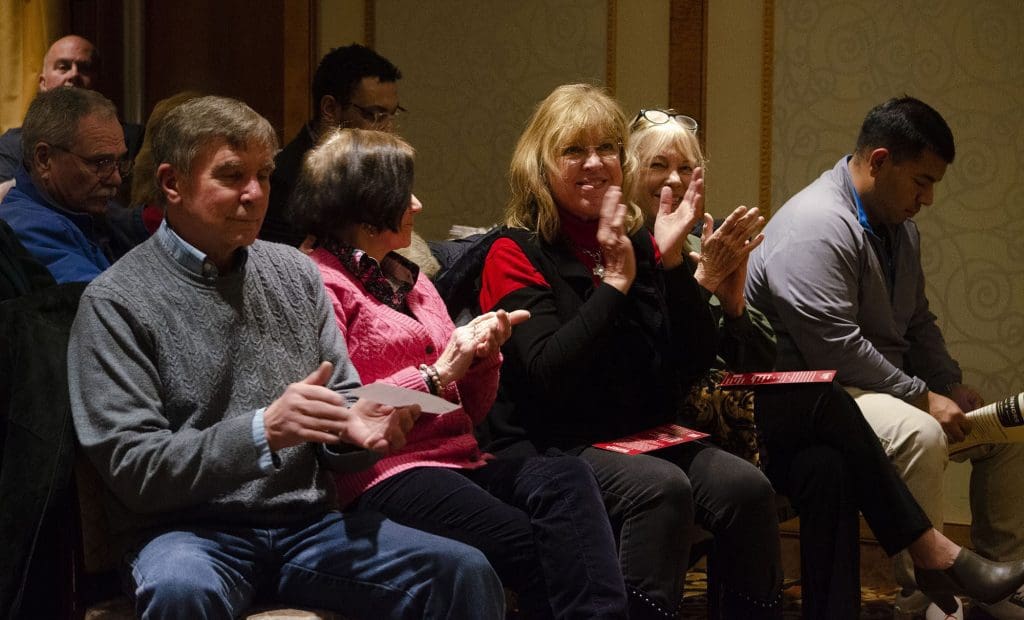 The Republican Town Committee’s District A representatives, Monday in the Norwalk Inn.

Wilms welcomed new faces to the meeting in the Norwalk Inn, inviting them to get on the mailing list. The event marked the beginning of a two-year term for RTC members, elected in January. District A has new folks, Chairman Rich Bonenfant said.

Wilms said the RTC is launching a “major initiative” this year to reach out to the Hispanic community, spearheaded by Estrella.

Hempstead, who represents Norwalk on the Republican State Central Committee, said the Republican National Committee is investing $300,000 in the Connecticut Republican Party, opening a field office in New Britain with an eye toward reaching Hispanic and minority voters.

“We’re on the move. They really are,” Hempstead said. 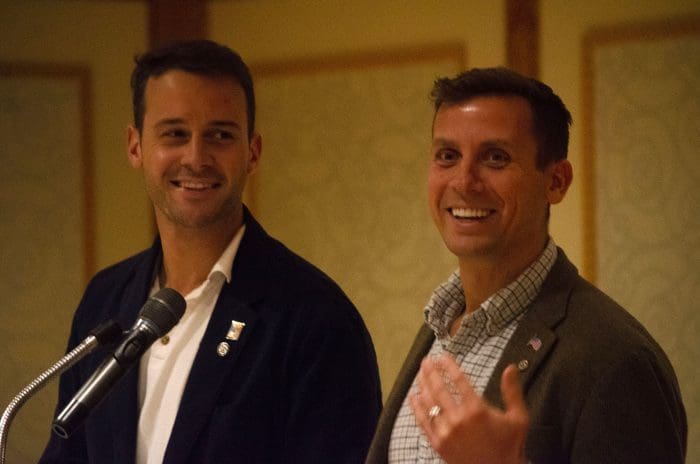 From left, Garrett and Bradley Bewkes of Stamford, at Monday’s Norwalk Republican Town Committee meeting in the Norwalk Inn.

Speakers included Bradley Bewkes, who said he and his husband have started a Connecticut chapter of Log Cabin Republicans.

“It’s exciting to see the organization grow,” said Bewkes, a Stamford resident. “The last administration, and a lot of people within it, really funded the organization to become more of a political arm of the GOP, and to make the GOP more diverse.”

The Republican National Committee is promoting its gay coalition “to sort of say to people, you know, we are not the party that the media portrays us,” Bewkes said. “…There’s literally thousands of LGBTQ Republicans.”

Trump got 27% of the LGBTQ vote in the 2020 election, “more than double than he did in 2016. So tides are changing, things are changing,” Bewkes said.

Hempstead thanked them for coming. “I think you opened a lot of eyes,” he said. “…I think we need to get behind this group.”

After listening to candidates for federal and state offices, Wilms made a plea for the local level, seeking folks to run to for legislative offices and judge of probate.

“We haven’t come up with anybody yet. So we’re starting to get to crunch time,” Wilms said, explaining that the RTC particularly needs someone to take on State Senate Majority Leader Bob Duff (D-25).

No one stood to jump at the opportunity. Instead, chuckles rumbled from every section of the room.

Duff was first elected to the Senate in 2004 and has never struggled for reelection. Ellie Kousidis took him on in 2020, stressing objections to the police accountability bill, but lost with 39.8% of the vote. Two years earlier, Republican candidate Marc D’Amelio got 36.8% of the vote; in recent memory, Greg Ehlers came closest with 41% in 2016.

Wilms ran against Duff in 2006 and lost. In 2014, NancyOnNorwalk asked him what he’d learned from that experience. He said, “Not to run against Bob Duff again.”

Hempstead told RTC members Monday that he’d just spoken to someone who might be interested in the District 143 State Representative seat but “they want to see what happens with the rest of the district seats.”

Darien may have a District 141 candidate, Wilms said. He’s open to a Wilton candidate for judge of probate.

“We need candidates and now is really the time for us to step up,” Wilms said. “The conventions are in mid-May. So, it’s about two months and so we need to really get going. So please spread the word.”

The Republican Party isn’t who the media portrays them to be, it is who they portray themselves as.

I don’t understand the republican position on Florida’s Parental Rights in Education bill. Can anyone explain? I know some locals who really like it.

This is why democrats may lose big this November.

This isn’t happening in Florida.

This could be the big issue this cycle. Along with the democrat owned inflation and gas prices.

This election is the republican’s to lose or they could lose because of our statewide Dominion owned Accu-Vote machines.

One of Norwalk’s “big mysteries” is why its Grand Old Party that had such a powerful and major influence on Norwalk for so many decades has fallen on hard times. Part of the reason surely is that CT itself has shifted left. And even a decade’s stagnant economy hasn’t fired up the opposition. Another reason is we no longer have many inter-generational families in our City anymore. With limited good jobs and high State/local taxes our youngsters move out of Norwalk and CT when they graduate schools. The internet might be another reason. Long gone are the days when a 100 or so City residents showed up at public meetings.

Still another reason is local politics is just less interesting. Fewer residents get upset about paying the top Supt salary in CT to oversee a school system where most grads fail to meet CT Edu Dept requirements. Most City residents have lost all hope our shabby Downtown will ever become a real downtown with major firms and good jobs.
More renters and apartment buildings are our future. And increasingly seniors are selling out moving away from punitive City and State taxes to more pleasant horizons. Years ago it was the seniors who formed the backbone of our active political parties.

No doubt there are other reasons no stated above. But we should mention in Norwalk’s “glory days” those active in City politics had a lot to be proud of. Especially our public schools. They were good enough to compete with the surrounding wealthy towns. Now they fail to meet CT Edu graduation standards and our leaders don’t seem too concerned. That’s why we have no public plan for improvement. Our City leaders are focused on building new schools believing new schools will boost student achievement.