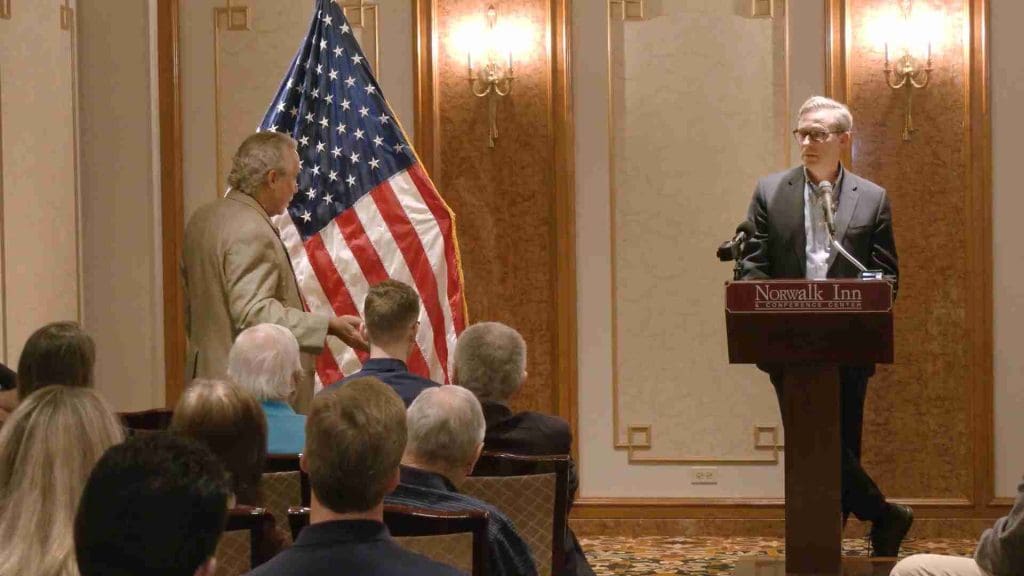 Norwalk Republican Town Committee Chairman Fred Wilms, right, agrees with an RTC member that “something has to be done,” Tuesday in the Norwalk Inn. (Harold F. Cobin)

NORWALK, Conn. — Fred Wilms was set to move forward Tuesday without any Republican candidates for Districts 137 and 140, when some Republican Town Committee members objected. Wilms, RTC Chairman, agreed to hold the meeting in recess to allow members time to come up with candidates by next week’s deadline.

Republicans are seeking candidates for the districts served by State Rep. Chris Perone (D-137) and State Rep. Travis Simms (D-140). Wilms said he’d asked John Flynn, who has twice run for the 140 seat, if he’d run again but Flynn is occupied with his run for U.S. Senate. Ellen Wink ran for 137 two years ago, but she is in prison as she awaits court proceedings after being charged with murder. She did the RTC a “favor” by running two years ago, Wilms said.

Both districts are entirely within Norwalk, so the RTC votes on them rather than a vote being held at a convention.

Wilms called for nominations for both seats, and none were made.  He asked if anyone had an objection to a “no candidate” form being submitted to the State, and no one spoke.

But after the second, “I’m going to close this,” from Wilms, a RTC member asked if there was a way to add a candidate later.

The deadline is Tuesday, Wilms said, adding, “We asked many, many people; we’ve asked people if they’d be willing to just put their name on the ballot, you know, and we unfortunately just did not have any takers.”

The Republican Party has not held those two seats in decades, Wilms explained. “Those are tough districts.”

Pressed for options, he asked if anyone would run. The man objecting said, “My wife will divorce me if I run for anything.”

You can bemoan “the fact that we wish it was different” or you can do something, Wilms said. If anyone wished to run, there was still time.

“I just think there’s so much at stake… A lot of us are disgusted,” the RTC member said. “And that’s … why I’ve come out… We have to do something.”

“I think everyone agrees with that,” Wilms said. “… I’m asking you all of you to either look within or get somebody you know. And if somebody says, look, I’ve got this person or that person for these two seats, then … we can come back from recess.”

These articles about the local GOP are painful to read. What’s the definition of insanity? Time for some straight talk.

Put the local GOP in a boat – and call it Sybil. Who you are? From this vantage, I can see three main camps: the MAGA team, the “moderates”, and those who are quite happy with the status quo and the spoils they accept from Harry. Among many challenges, the Norwalk RTC has an identity problem.

Now the MAGA folks simply can’t “read the room” – sorry, but Norwalk CT? You can’t win. The folks playing both sides? Don’t complain about the democrats – you own ½ the blame. And you moderates – when will you stand up and speak out? Silence = complicit. This fractured caucus self-destructs under the absence of unity.

Still – even that fixed? You need to look at the math. Without a coalition, you can’t win – unless the democratic party suffers massive defections.

Let me remind the RTC of the past few years – and let me drum up a name that should be fingers on a blackboard for the whole city: LISA BRINTON.

In 2019, with a (reluctant from some) cross endorsement from the RTC, upstart “U” Lisa got within 4 points of the mayor with his 150k in outside money and the entire D-machine. No one else has come close to that. That GOP group who secretly work with & for Harry couldn’t stomach a women & mother with international business acumen in power. It wasn’t fully misogynist – it was more “townie”. Her platform forced Harry to come to her, and it was the last time anyone in this city forced mumbles Harry to explain himself (he did so, poorly), and she successfully articulated a vision that more closely resembled what the majority of people wanted. But Bob Duff and Harry Rilling rolled out racist tropes and the D-party machine – voter turnout was typically anemic – and the D’s handed control of our future to Hartford. Straight party line voters – you own that.

It’s a sick joke that by simply requesting the republican endorsement, Lisa was rewarded with character assassination by virtue signaling democrats and undermined by the very R-people who pretended to support her. Recall the trojan horse named Darnell Crossland? Haven’t seen him in any RTC photos of late.

Then last year, Lisa resurrected the “Independent Party” in Norwalk, and found candidates of all political persuasions to step-up and seek to make Norwalk a better place, with potential addition by subtraction of Harry’s complete control over the city. As I noted yesterday – the R’s blood oath loyalty led them to vote straight line B – with thousands of “zero” votes, effectively handing the BOE (they put forth no candidates – sound familiar?) to Harry. How’s that working out for Norwalk?
I mean seriously – this city is nutty. The Democrats call Lisa a Republican, and the Republican’s simply won’t vote for her because she’s not.

This city deserves everything that is happening to it.

As for the local GOP – a quote from Don Mastronardi in his article – R’s need to “convince people that we have better ideas…..we have to communicate what our idea is to make things better”. Don – I couldn’t agree more.

But therein lies the problem. What – exactly – are those idea’s Don? Because for over 6 years I have been begging the opposition party to speak up and speak out – to come to the table with idea’s and solutions – not just gripes. And what we have received is – silence. No ideas. No plans. Not even any critical comments about what Harry’s administration is doing – because can’t bite the hand – townies.

Until the local GOP gets the leadership and acceptance to unify the fractions, until the moderates of the party find their voices, and until the party washes the stubborn and destructive element that can’t comprehend that the only path to victory is a coalition of moderates (both national parties), U’s and I’s – they will continue to get waxed every November into perpetuity.

Believe me – like the cartel leader in the series Ozark – Harry knows his enemy, his threat – is going to come from within. Maybe no one else is paying attention, but he has successfully purged many of those folks right off the council and BOE, leaving only newcomers who stay in their lane, and devout loyalists who obey orders.

Like I said – Norwalk – you did this to yourselves. Take a bow.

To Patrick Cooper:
In the County’s most transient City where renters now overshadow homeowners with City Dem encouragement its a tough road for a resurgent GOP. By and large City parents, residents and leaders continue to support our Dem controlled BOE even though most of grads fail to meet CT Edu Dept standards. And by and large City taxpayers support yearly tax hikes and lack of progress in creating a viable and attractive Downtown.

So far no cadre of Republicans have emerged demanding a BOE committed to graduating students who meet CT Edu Dept standards. Holding school Administrators accountable for student lack of achievement. Or even protesting a $300k+ Supt salary – highest in CT.

So far no cadre of Republicans have proposed avenues for encouraging major influx of new business in our long depressed Downtown. Or have plans to improve our long standing 10% City Poverty level.

If Republicans want to get “noticed” then time to start writing letters to the Editor explaining how they would improve on Norwalk’s well known problems. Changing leaders from one Party to the next isn’t likely a path of success. Norwalk is surrounded by 5 well governed towns whose leaders generally have strong business/management backgrounds. Maybe there’s a message in their success on how to proceed for the City’s Republicans. When is the last time a Republican leader called attention to our failing public school system and suggested remedies for major improvement ? Or proposed how to attract major new business with good jobs ?

@Piberman: Maybe if you didn’t spend so much time calling Norwalk renters everything BUT children of God, they’d be willing to entertain alternative ideas about Harry and his merry band of thugs.

Seriously. Take a look in the mirror. The word “renters” is in the first paragraph of 90% of your comments, and, as the kids like to say, you go “hard-R” with it; the hate literally drip off the screen. How in the WORLD would you ever expect anyone to listen to you after that? When you tell them right off the bat that they’re basically everything wrong with the place they’ve… wait for it… *chosen to live*?

I dare you: Can you come up with a SINGLE positive thing to say about “renters”? I know your mama raised you right, so you *must* recognize this common parenting exercise, but it’s probably been many decades since anyone’s ever made you do it.

@Patrick: The Norwalk GOP clearly doesn’t care about being a realistic opposition party by adapting to its harsh environment. It’s just a club for hobbyists who really hate Democrats and need a safe space where they won’t feel judged for voicing their views. Every once in a while, some poor lost soul wanders in thinking it’s a real political party, but after an election or two they figure it out, and leave if it hasn’t turned them crazy like the rest.

The GOP is internally divided; but rest assured, more and more of us are sick of “moderate” Republicans who vote with Dems.

Where are the “moderate” Democrats? Oh, right, they converted to Republican or Independent because of the Hard Left drive now pushing for 100 genders and “white people bad slave owners” talk in “schools”.

Compromising — with a Communist-led Democratic party?? Not something conservatives are interested in. Sad that no one stepped up to challenging the status quo, so we have work to do.

Lol, Sally, thank you for so eloquently proving my point.