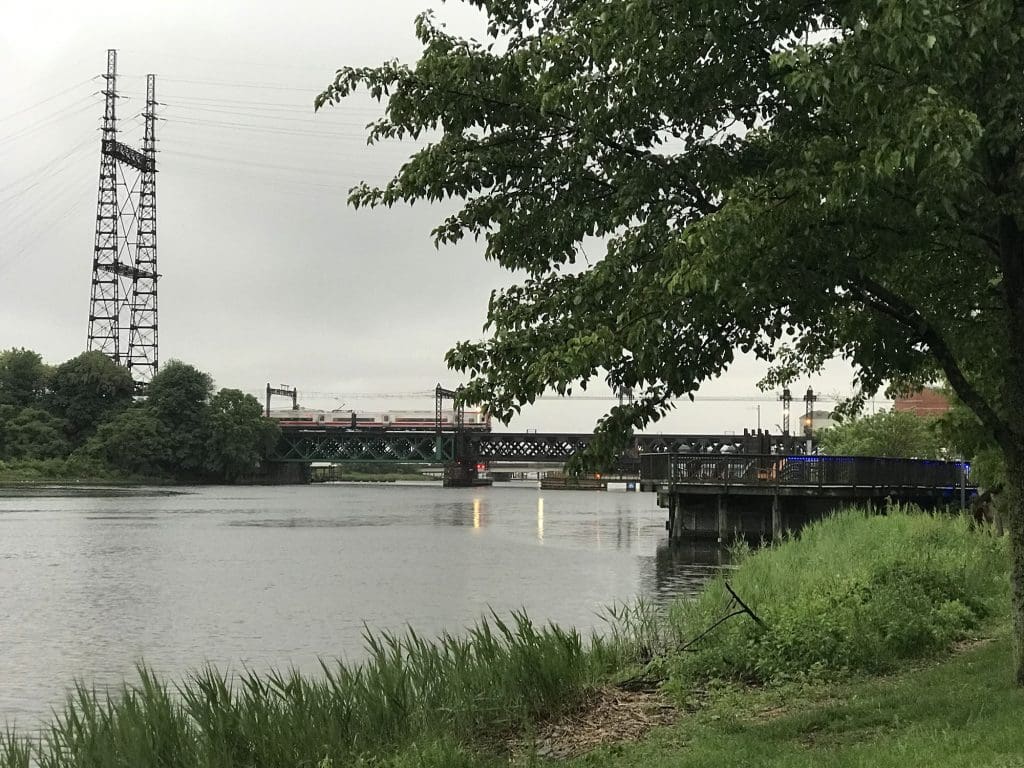 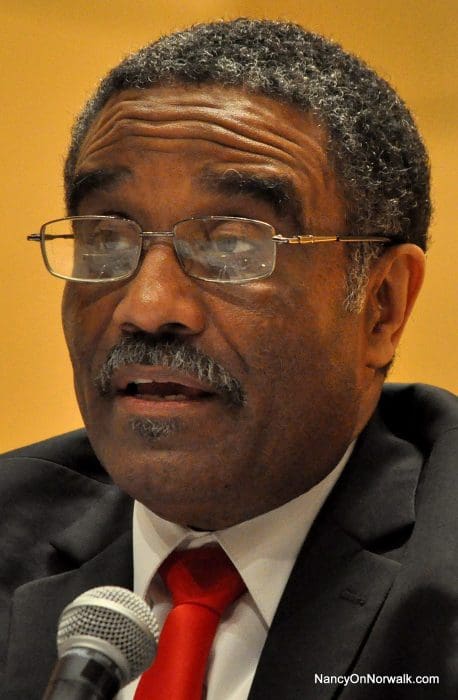 NORWALK, Conn. — Here’s some Norwalk news briefs for you:

Gov. Ned Lamont caused a bit of a stir here in April when he promised to “take another look at the Walk Bridge,” empathizing with concerns expressed by critics of the massive bridge replacement project.

“I haven’t had a discussion with the governor on the Walk Bridge, nor have any of the Walk Bridge project engineers that I know of,” Mayor Harry Rilling said Tuesday to NancyOnNorwalk.

Not only that, but Connecticut Department of Transportation (ConnDOT) Commissioner Joseph Giulietti “indicated that the bridge is moving forward. That’s what we have up until this point,” Rilling said.

There’s already “a lot” of work being done in connection to the Walk Bridge program, he said, mentioning the work on the Ann Street railroad overpass and the Marshall Street railroad bridge.

The Walk Bridge program is inspired by the need to replace the aged railroad bridge over the Norwalk River but includes replacement of all the railroad bridges in Norwalk, work on East Avenue and on the East Norwalk train station, electrification of the Danbury dockyard and the CP243 project, a series of railroad switches north of the Walk Bridge.

Rilling said he is “very encouraged” by ConnDOT’s smooth replacement of an Interstate 95 overpass in Stamford. The complete demolition of the two Route 1 bridge spans was scheduled to close I-95 for two consecutive weekends but the highway was re-opened hours ahead of schedule both times.

“They had minimal disruption and they were completed actually before they anticipated that they’d be completed,” Rilling said. “So, based on the fact that a lot of the Walk Bridge work is underway now and the fact that the actual bridge replacement parts, actual bridge equipment, are being built on a barge upstream and then floated in, I am hopeful and cautiously optimistic that the disruption for the city of Norwalk will be minimized to a great degree.”

The biggest problem will probably be the North Water Street closures but Norwalk has signed on with Waze, a popular travel navigation app used by many to avoid traffic jams, and will be uploading real time data, he said. “That will be part of our wayfinding process.”

Redevelopment Agency Chairman Felix Serrano said that would happen after the replacement is onboard.

“We disagree on that,” Rilling said Tuesday, downplaying the conflict.

“I think we have an understanding that we will have some participation in the selection process of the new person,” Rilling said, also adding that the City suggested an interim director be in place until the agency’s role could be reevaluated.

The Redevelopment Agency was founded in 1950, following the Housing Act of 1949, the RDA website states.

Given that Sheehan is leaving at the end of this week, “This is the time to do it,” Rilling said. However, there are two lines of thought on reevaluating the Agency’s mission and “neither position is wrong.”

“The bottom line is we need to get the right person in place and make sure that we reevaluate what their purpose should be.”

‘The Court should reconsider’

The City of Norwalk and the Norwalk Board of Education on Monday requested that a Stamford Superior Court judge allow them to reargue their request for summary judgement in the lawsuit filed against them by former Norwalk Public Schools Human Relations Officer Bruce Morris.

Morris, former District 140 State Representative, accuses the defendants of racial discrimination in the elimination of his NPS job. The defendants in April requested summary judgement, a decision issued by the judge instead of by a jury.

“There are substantial material triable issues of fact which can only be addressed by a jury,” Judge Alex Hernandez said on June 3, declining the request.

While the arguments in the half-hour June 3 hearing were focused on emails sent by the-BoE Chairman Mike Lyons in 2015, mentioning a possible “race war” if the “snake” Morris were let go, Monday’s motion uses the 2015 written reprimand issued to Morris as a centerpiece of its argument.

To win a discrimination claim, Morris must prove an adverse employment action and the written warning did not result in a loss of pay or detrimental consequences, Attorney Dennis Durao states.

Hernandez “provided no legal reasoning or rationale” for his decision and, “had the Court at least considered certain arguments presented by defendants,” the law supporting those contentions would have “materially altered” the ruling, Duaro states, arguing that the “seemingly overlooked law” has left the defendants “guessing as to the scope of trial.”

A hearing was held May 28 in the lawsuit filed by Harbor Keeper, a non-profit citizens group, against the Connecticut Department of Transportation and the Federal Transportation Authority in an attempt to halt the Walk Bridge reconstruction.

Harbor Keeper argues that the State has not adequately established the need for a bridge that opens instead of a fixed bridge, which could be much cheaper.  In dueling legal briefs, each side has filed a motion for summary judgment – a request for the court to rule that the other party has no case, according to lawyers.com.

The federal courts website states that the May 28 hearing on these motions lasted 70 minutes. Judge Stefan Underhill has taken the matter under advisement, meaning that he is deliberating, according to USLegal.com.

Perhaps more accurate questions needs to be asked and addressed prior to hiring a new leader. With State Statues as a guideline – RDA what is your purpose? Where are the extreme police powers needed in Norwalk to facilitate change? Are you relevant anymore?

Mr Serrano should first address those questions before anyone is hired. Public debate is needed here and given the shenanigans that swirled around the highly controversial Wall Street West Ave Neighborhood Plan public oversight as well.

Redevelopment Agency should be abolished. It is a cesspool of conflicts of interest.

Not interested in what Rilling has to say.
Where is Mayor Laoise?

The Walk Bridge replacement, objected by City residents and bringing only major costs to the City without any benefits, will likely be a lasting legacy to Mayor Rilling. Many of us had hoped Mayor Rilling would carry Norwalk’s strenuous objections to Hartford and stand up for our City.

Norwalk’s Redevelopment Agency has been in name only. Other than increasing renters from 30 to 40% of our population, our long shabby Downtown hasn’t changed much over the decades. Reflecting lack of interest/commitment in City Hall for attracting major business to relocate Downtown bringing good jobs to our commuter City. Stamford demonstrated how to do serious redevelopment. So its not a “mystery”.
City Hall remains the primary source of “good jobs” in Norwalk and most employees live outside the City.

Norwalk’s future will increasingly be shaped by CT’s increasing economic misfortunes – a State with very high taxes, huge unfunded pension obligations, absence of modern cities and dependence on a small number of Gold Coast residents near NYC for a major portion of its income. Many of us had hoped enlightened leadership would help create a vibrant Downtown so Norwalk could follow the successful Stamford example.

Transforming cities is always a team effort. Norwalk hasn’t had the “team” in place with a serious interest in major Downtown redevelopment. Stamford demonstrated how it took a major effort by elected officials, citizens with major business backgrounds and a determined citizenry to make progress. Sadly none of those key elements are present in Norwalk.

Lyons costing taxpayers more money because he can’t keep his fingers off the “send” button.

DT, Morris started his complaint before he had even seen any emails written by me; they had nothing to do with his filing.

Criticizing 20 year BOE veteran Mike Lyons, a prominent corporate attorney, and viewed by many long time residents as the msot competent and dedicated BOE member in recent decades on legal matters that are properly the purview of CT’s court system is really strange. And has a major cost to our City by discouraging residents with prominent careers from participating in “public service”. Our surrounding wealthy towns have no trouble indeed getting their prominent residents to serve. Witness the results in Westport where taxes have been kept unchanged for 5 consecutive years reflecting competent financial management of Westport affairs.

If we want improved governance in Norwalk, a City where a college student recently served on our Common Council, we need to encourage our most able citizens to serve. Criticizing them endlessly in print is not only unfair, its boorish and serves no useful purpose. If we have faith in CT’s court system why not let the Courts decide BOE personnel matters. Not so called “public opinion”.