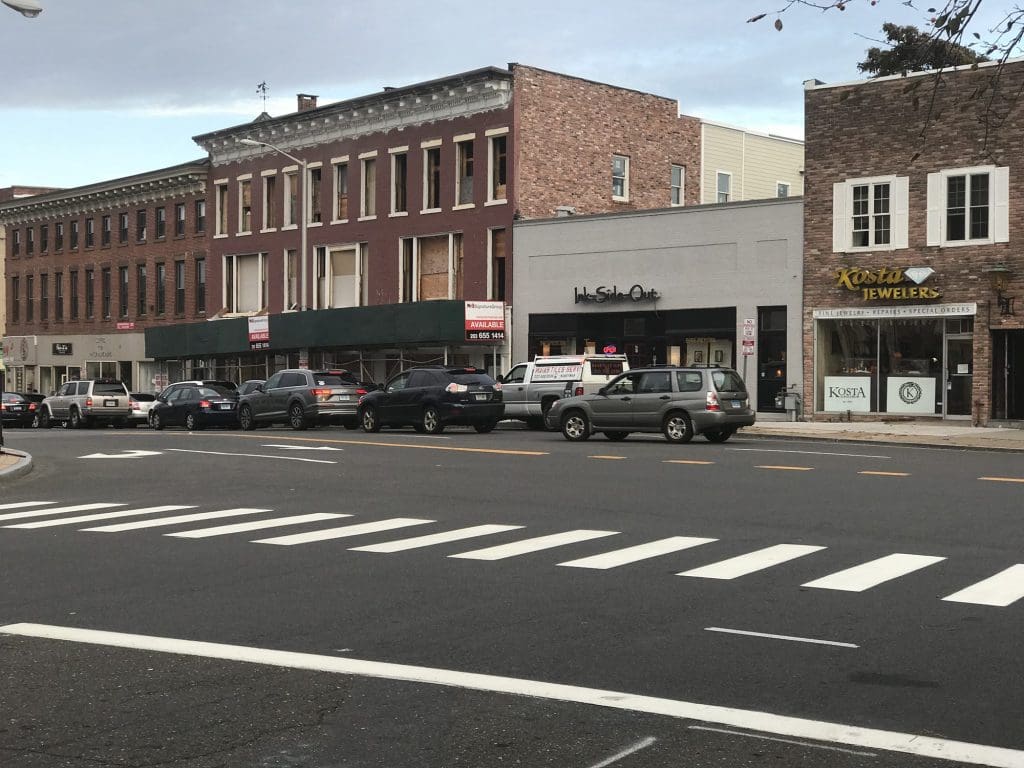 NORWALK, Conn. – Here’s a few odds and ends for you:

It’s October and the façade at 45 Wall St. looks unchanged, despite a July announcement that it would be complete by the end of August.  The building was damaged eight years ago by a fire. 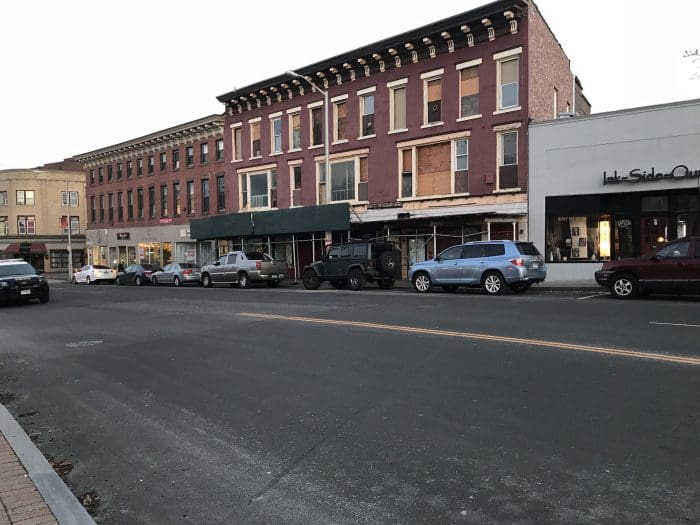 The state of 45 Wall St. in February.

The July estimate came from Norwalk Chief Building Official Bill Ireland, who has regular communications with the contractor hired by owner Ganga Duleep. On Friday, Ireland said the work hasn’t been completed yet because the windows are on back order. A street level view of 45 Wall St. on Tuesday.

The windows have to be custom made because the property is a historic building.

This saga has stretched on for years and work has proceeded at a snail’s pace. Duleep originally blamed TD Bank for holding up renovations, and won a lawsuit against the bank in 2013.  Renovations began in April 2015 after the city enacted a blight ordinance and Ireland issued citations to Duleep and TD Bank.

Ireland initially explained the slow progress by noting that the work was painstaking, as each joist had to be formed to fit in the existing opening in the brick walls of the historic building. Then there was talk of the roof needing to be rebuilt.

A real estate ad seeking a tenant for the building was last updated Sept. 19, with the lease rate listed as $29 per square foot. There are two spaces, one with 1,350 square feet, the other with 1,250 square feet.

Republican District 140 State Representative candidate John Flynn said recently that although the League of Women Voters of Norwalk was not successful in its efforts to schedule a forum for Flynn and opponents Travis Simms and Colin Hosten, the Norwalk Branch NAACP was attempting to organize a debate.

“He called me and asked would the NAACP sponsor a debate between him and Colin,” Norwalk Branch NAACP President Brenda Penn-Williams said in a Sept. 22 email. “I didn’t give him a definitive answer. I don’t think it is going to happen.”

League of Women Voters member Elsa Peterson Obuchowski said recently that Flynn requested that he be allowed to ask two questions each of the other candidates. The League considered this but declined, and the forum was not scheduled.

“The League of Women Voters of Norwalk uses the following format for candidate forums.

“(a) prepared in advance by a bipartisan committee; they are not disclosed in advance;
“(b) written on index cards by audience members at the event and screened by bipartisan panel, then handed to the moderator.

“All questions have to be able to be answered by all candidates; there cannot be any questions that are directed only at a particular candidate.
“Candidate responses are timed by bipartisan timers.

“As a board member of the LWVCT (statewide League board) I’d also like to clarify that local Leagues can set the format for candidate forums/debates as they see fit, except that they cannot have a solo event.  That is, there must be at least two candidates running for the office, and at least two of them must commit to participate in the forum/debate.  LWVCT has more specific standards and procedures for debates of candidates for statewide office (governor, lt. governor, atty. general, state treasurer, etc.).

“I hope this helps to clarify how League candidate forums are organized.” 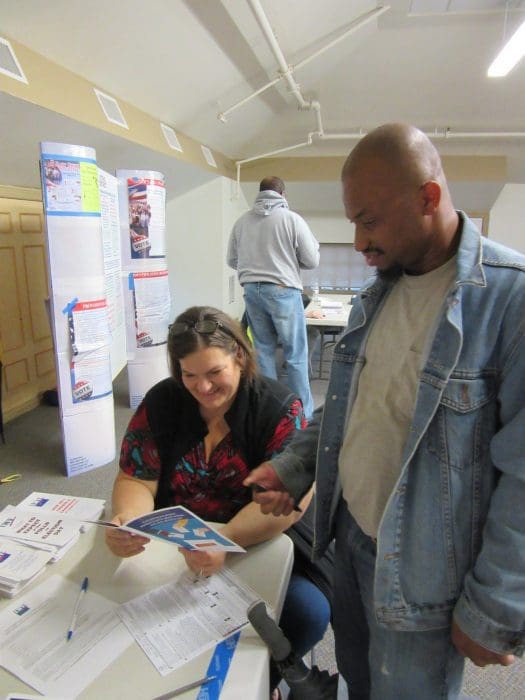 (League of Women Voters of Norwalk)

The League’s Voter Registration Day event last week was a success, according to Obuchowski, who wrote:

“We had a very good turnout in spite of the wet weather and flooded road conditions.  Stuart Wells and Ron Banks from the Registrar’s office set up a full range of voting equipment for people to examine and ask questions about.  About a dozen League volunteers helped to answer people’s questions.

“…I sat with a woman who said she became a U.S. citizen a few years ago and wanted to gain a better understanding of the regulations about voting.  She asked about the pros and cons of registering with a party affiliation (e.g., only party affiliates can vote in primaries), the rules for voting by absentee ballot, and why people’s polling places might change from one year to the next.

“Several people came to register, and others to check whether their registration was current.

“Several others attended who are certain they are registered, and active in local politics – they came to learn more about the voting process.  Now they will be more knowledgeable so that when their friends ask them questions about voting, they’ll be more confident of giving accurate answers.

“With all the voting equipment on display and personnel to explain it, the setup reminded me of a ‘petting zoo’ for elections.” 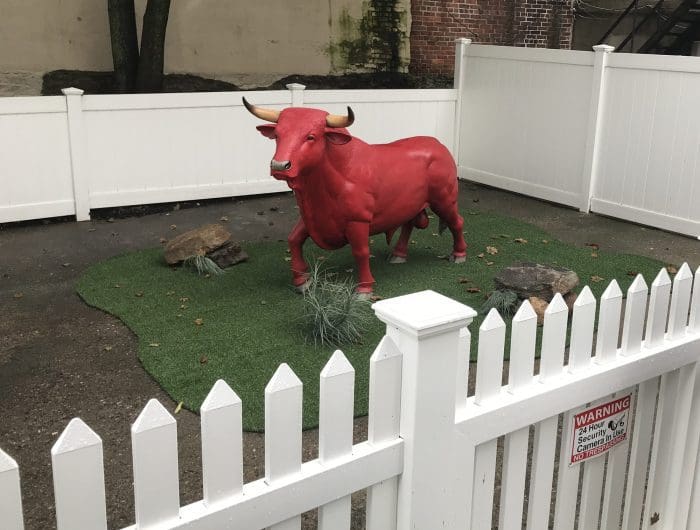 The bull behind Head of the Harbor, along a public waterfront walkway.

M.F. DiScala appeared among the pages of NancyOnNorwalk Saturday, with an editorial touting the financial benefits and amenities of its Head of the Harbor development.  The opinion piece noted $289,000 in additional yearly annual tax revenue for Norwalk, plus “public access to the new piazza, waterfront and amenities.”

One of those amenities is located in a pen behind the newly completed Head of the Harbor South.

“The Danbury Fair, which was an annual fair and park setting for over 100 years, closed in 1981.  They sold the property to the developer who built the Danbury Fair Mall on the site and all of the items from the original Danbury Fair were auctioned off.  Mike Discala bought the bull at the Danbury Fair auction.  He has had it since then and we all agreed the pad out back was an appropriate spot for it.”

State Rep. Bruce Morris (D-140), who is retiring from the statehouse, was recently chosen as one of the Connecticut NAACP’s 100 Most Influential Blacks in Connecticut for 2018, according to a press release.

“It is an honor to be chosen by the CT NAACP for this prestigious recognition,” Morris is quoted as saying. “This award is a welcomed acknowledgment and appreciation that the work of representing the community is never in vain. It is important to have those that are willing and able to serve to be allowed the opportunity and community support to effectuate political and community service.”

The awards reception was held Sept. 22 at Foxwoods.

“The CT NAACP 100 Most Influential Blacks in Connecticut Awards celebrate the many renowned influencers, while also recognizing the work of community and industry innovators that often goes unacknowledged….

“In addition to currently serving as Deputy Speaker of the House, {Morris} serves on the Education, Judiciary, Finance Revenue and Bonding, Legislative Management and Human Services Committees.

“Past legislative leadership positions have included Chair and Vice-Chair of the Black and Puerto Rican Caucus, House Vice-Chair of the Human Services Committee, Chair of the Fatherlessness Task Force and Executive Board Member of the National Conference of Black State Legislators.

West Norwalk resident Paul Cantor thought perhaps you could use some happy news.

Cantor went for a bike ride Saturday to “check the water levels in two local reservoirs,” he said in an email.

Check out the photos below.  “Remember it wasn’t too long ago when we were concerned about the drought?” Cantor wrote. 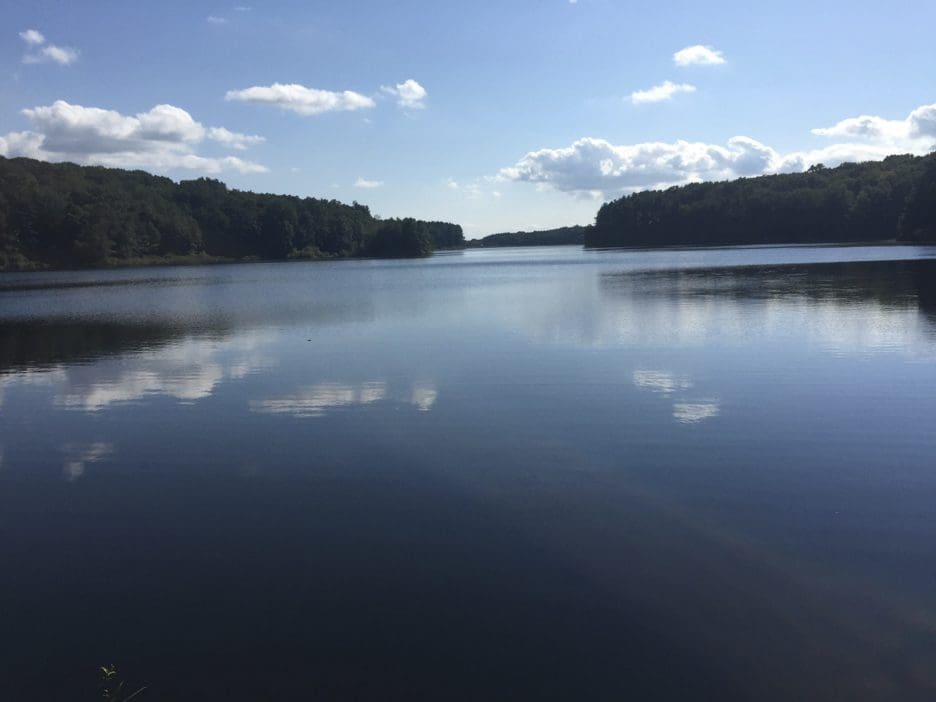 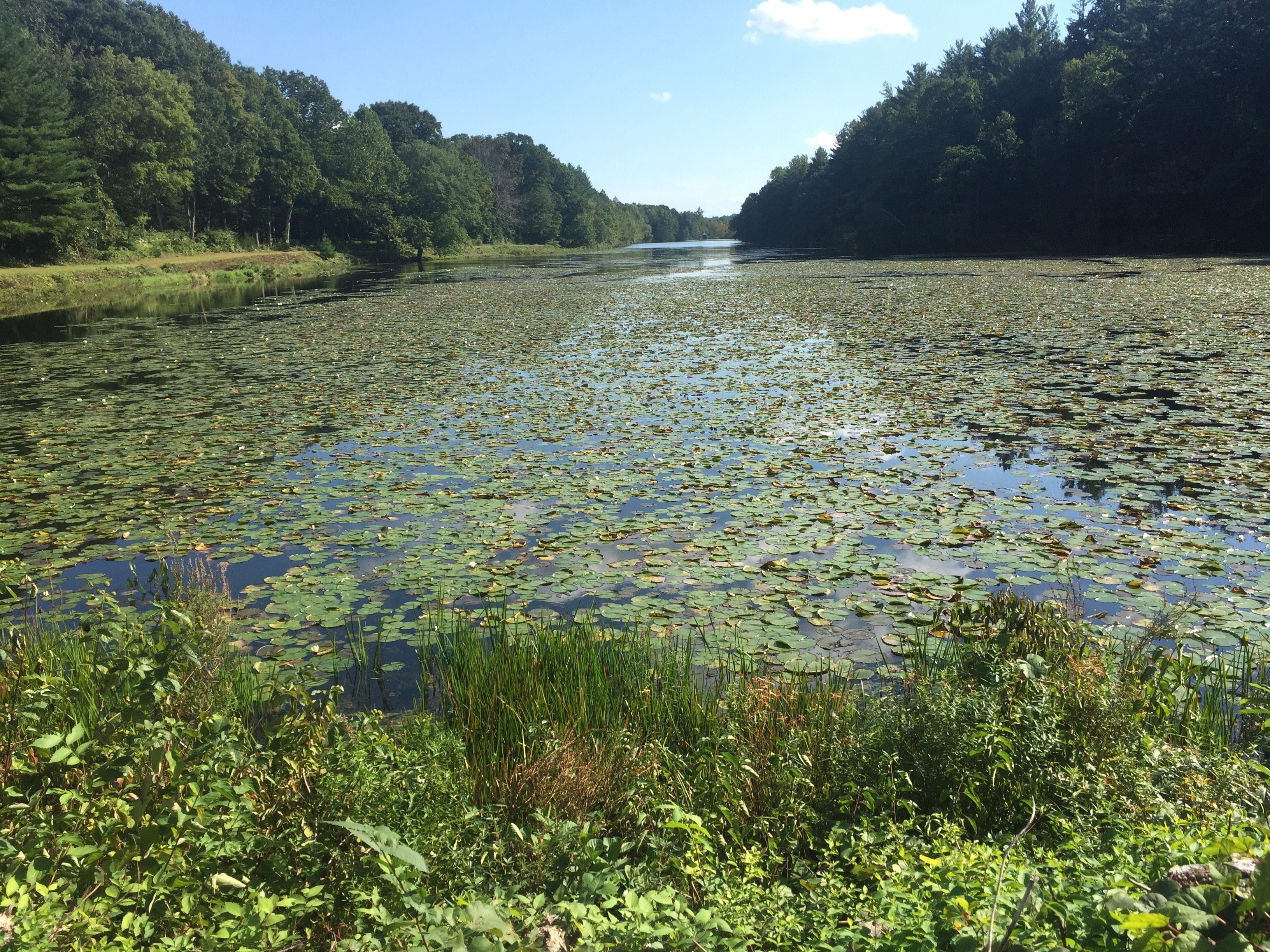