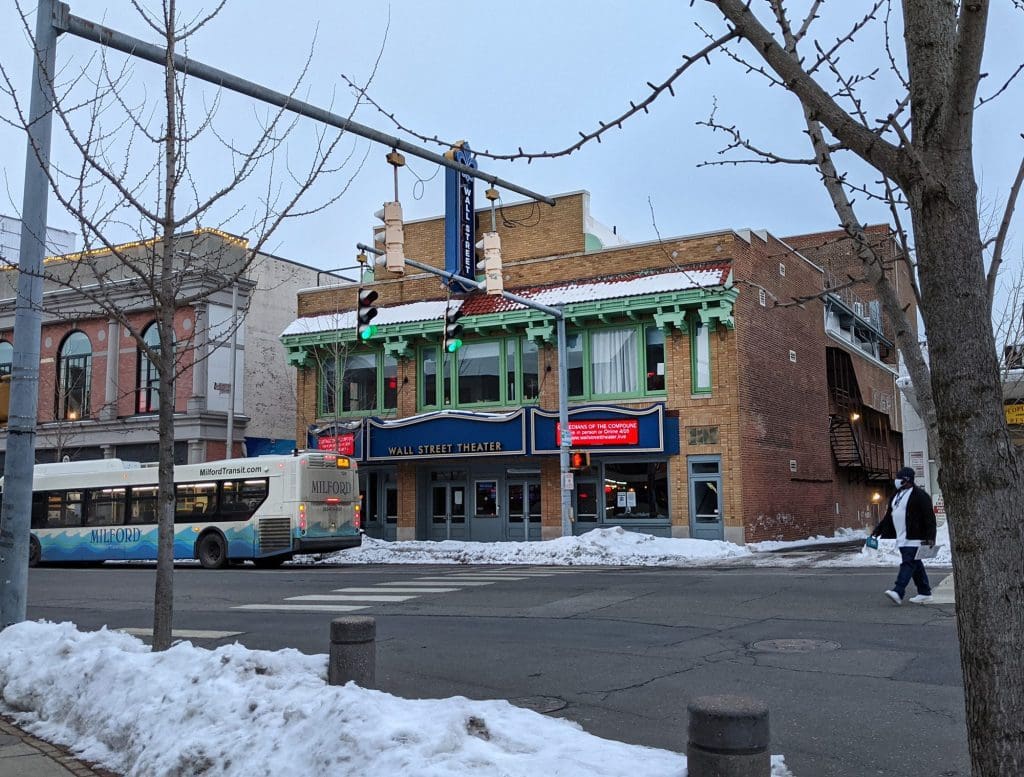 Hillsong Church owes the Wall Street Theater $100,899.25 in unpaid rent, the theater company alleges in a lawsuit filed Jan. 20. Hillsong is also accused of removing electronic equipment that belongs to the theater.

So Hillsong opted out: on May 11 it invoked a 120-day termination clause, the lawsuit states. Lamont lifted the total prohibition 18 days later, with terms that would allow Hillsong to have 100 people inside the 690-seat theater.

The theater is seeking rent for those 120 days.

Electronic equipment was taken from a storage container on Dec. 18, the lawsuit states. It hasn’t been returned, resulting in a “significant loss.” WST says this is a “statutory theft in violation of Connecticut General Statute 52-564.” Meaning, it’s eligible for treble damages.

Norwalk Police Sgt. Sofia Gulino said there had been no calls for service regarding a theft from the theater.

On Monday, Hillsong Church filed a request to move the matter to federal court.

Sold, for more than the City’s appraisal estimate

Belpointe Capital has sold The Berkeley, located at 500 West Ave., and Quincy Lofts, located at 30 Orchard St., to BQ Holding, LLC, a Delaware company.  The apartment buildings were completed in 2016 and 2017.

The Berkely is appraised at $41 million and assessed at $28.7 million.

The L.A Fitness Club at 761 Main Ave. is working to comply with the Americans with Disabilities Act of 1990 (ADA) after parent company Fitness International LLC settled with the U.S. Attorney’s Office, a press release said.

The settlement agreement resolves an ADA complaint filed by a person with disabilities alleging the club was not accessible to individuals with physical disabilities, the Feb. 10 release said. L.A Fitness is “improving the accessibility of the facility’s fitness equipment areas, adding accessible features to restrooms and locker rooms, ensuring access to all guests in the pool area, and making improvements in the ‘Kids Klub’ area to ensure access for individuals with disabilities” and “will continue to make improvements over the next three years.”

“Under federal law, health club facilities are considered ‘public accommodations’ and are prohibited from discriminating on the basis of disability.  The ADA authorizes the U.S. Department of Justice to investigate complaints and undertake periodic reviews of compliance of covered entities.  The Justice Department is also authorized to commence a civil lawsuit in federal court in any case that involves a pattern or practice of discrimination or that raises issues of general public importance, and to seek injunctive relief, monetary damages, and civil penalties.

“U.S. Attorney {John} Durham noted that the Fitness International, LLC has worked cooperatively and collaboratively with the U.S. Attorney’s Office to address the ADA issues without litigation and to make comprehensive changes to the Main Avenue health club facility to improve accessibility.

“Any member of the public who wishes to file a complaint alleging that a health club facility or any other place of public accommodation or public entity in Connecticut is not accessible to persons with disabilities may contact the U.S. Attorney’s Office at 203-821-3700.”

Can’t the owners of Wall Street Theater do anything without litigation?