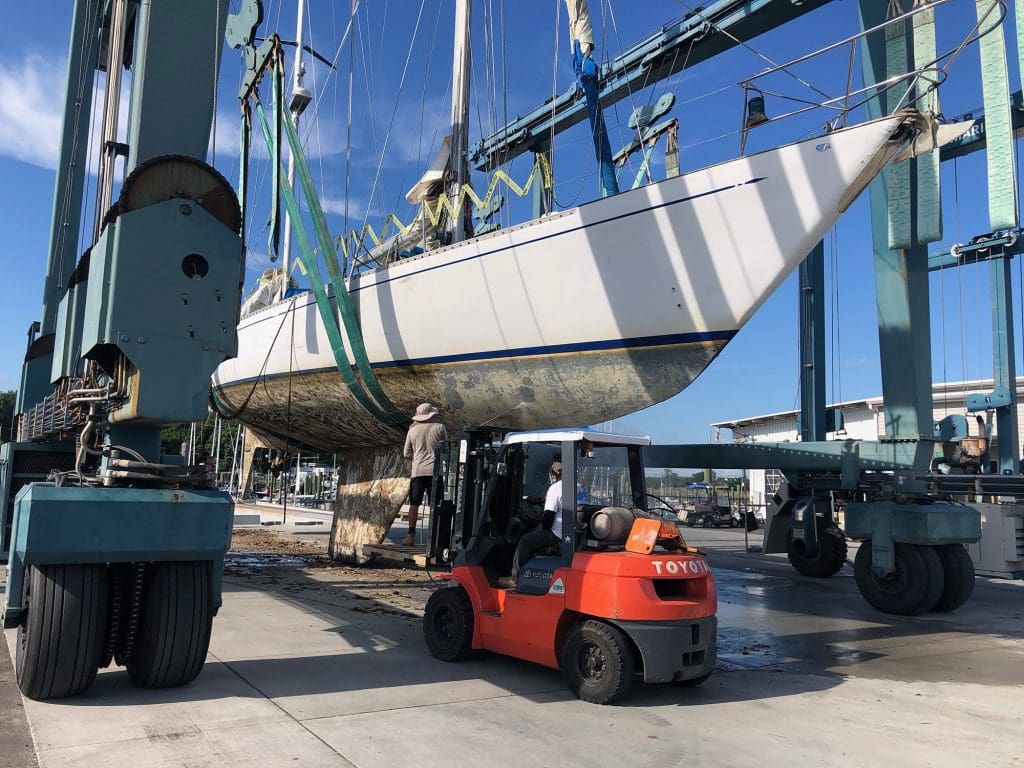 Swany, being cleaned up in August at Norwalk Cove Marina. (Jeffry Spahr)

NORWALK, Conn. — Swany, a 72-foot double masted sailboat that was moored to the Veterans Park visitors dock without permission, is being auctioned by the City of Norwalk.

James Harding, then the boat’s owner, brought Swany to the visitors dock in early March, then didn’t heed requests from Norwalk Harbor Master Gregg Scully and the Norwalk Marine Police to find another home for it. The U.S. Coast Guard therefore classified as an abandoned vessel, under state statute.

The City removed the boat from Veterans Park ahead of Memorial Day weekend, mooring it off Sheffield Island. This led Harding to ask, “Why is Norwalk stealing my yacht?”

The Connecticut Department of Energy and Environmental Protection (DEEP) gave him an extra 30 days after he missed the first deadline. Swany was towed to Norwalk Cove Marina in early August after DEEP issued a Notice of Assumed Ownership.

The City doesn’t have the boats keys and the 6-cylinder diesel motor doesn’t work, the City’s auction page states. The “teak interior {is} in poor shape, poor condition in general, last USCG documentation was 1188715, no known liens, sleeps 5-6, two masts with all sails intact,” it continues.

“The Marine Survey was based on visual inspection,” it states. “No Ship Builder was listed on the Documentation. No paperwork or builder information was found on board. According to the Vessel Documentation Report from MarineTitle.com the hull was built in France. This has not been verified by any other information found.”

It’s been described as too deep for Norwalk Harbor.

Sgt. Pete Lapak guided the boat to the marina in August and said it was the most difficult boat-handling operation he had ever encountered. Swany’s keel, which descends almost 15 feet deep, kept digging into the seabed as he was maneuvering the sailboat within the tight spaces of the marina.

Norwalk Deputy Corporation Counsel Jeffry Spahr said Monday that he doesn’t have a dollar figure for what Harding owes the City due to the mishap. “We hope to cover our storage costs,” Spahr said. “Our main concern has always been the safety of the public.”