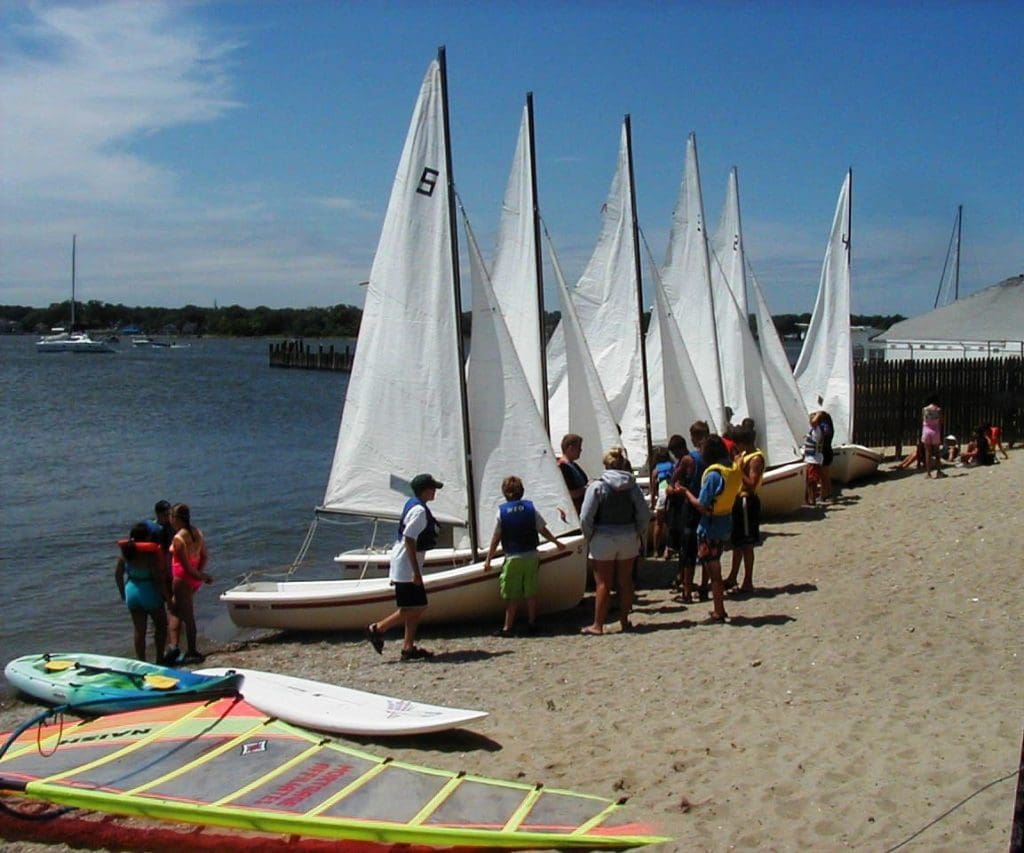 NORWALK, Conn. — Bruce Caslowitz has been running the Norwalk Sailing School since 1985. For the first time since he’s led the program, Caslowitz said he’s been alerted by the City that the land his property is on could be going out for a public bid.

“I usually get 5-year leases that are renewed automatically,” he said. “I’ve never even had to go to City Hall for Common Council or a Parks and Rec Committee meeting to get it…it just was automatically renewed every five years.”

So Caslowitz said he was surprised when his lease expired this year that Nick Roberts, the City’s recreation and parks director, told him the lease for his property would go out to bid next season.

“I’m not really a city program, we only lease the property from the City and that’s the way it’s always been—I don’t know if (Roberts) even gets it, whether he thinks maybe the City even owns the boats and the buildings, but they don’t,” he said. “We own everything here, the City owns only the land.”

Josh Morgan, communications manager for Norwalk, said that City decided to issue a request for proposals for the property, located at Calf Pasture Beach, to allow “staff and elected officials to review submissions” and to make sure all City agreements are standardized.

“It is important that contracts go through the public process and do not get extended in perpetuity,” Morgan said in an email. “It is also important for the City to have standardized agreements at its facilities and public spaces. The proper agreement for this type of use would be a license agreement—not a lease agreement—which will protect the business, City, and taxpayers and will allow for equitable use of the space.”

Morgan said that Caslowitz had been operating under a five-year lease agreement at $1 per year.

The sailing school was originally called the Norwalk Small Craft Safety Training Program Inc. when it was founded in 1964 by then-Norwalk Mayor Frank Zullo. The program offers summer camps for students to learn the ins and outs of sailing, as well as private lessons for families and adults on the weekends.

“It’s been my mission to always make it a little bit better each year, better equipment, the staff that I have,” he said. “It’s been very organic. (My staff members) have always been campers for the most part that turn 16 and they become helpers and then they get certified as a sailing instructor.”

The sailing school is a 501(c)(3) nonprofit and Caslowitz said part of its mission has been to provide access to the water to people who might not come from boating families or have the money to join a yacht or private club.

“That’s what’s unique about this program—it’s not a yacht club program where the parents have boats per se and they bring the kids to a yacht club and there’s a youth program,” he said. “This is the only community-based, open to the public that’s around.”

The school is also still repaying back a 2014 Small Business Association (SBA) loan that it was awarded to repair after Hurricane Sandy hit.

“We had to rebuild after Hurricane Sandy—we lost all of our boats, all of our windsurfers and the buildings and our deck,” he said. “So we secured a FEMA SBA loan in 2014 to rebuild and buy some boats to keep it running and we were able to get it rebuilt between April and Memorial Day, so basically less than 2 months.”

Caslowitz said that school is often “break even” due to the limited season and all the insurance and equipment costs to run it. This year, in particular, will be hard because the COVID-19 pandemic forced them to cut two weeks of their summer session and have about half the number of kids each week.

“The cost of doing business here was that with the short season it’s almost impossible to do, to survive with the cost of insurance and staff and motorboats and gas and just repairing 30 sailboats and 20 kayaks and just keeping supplies for everything,” he said, “It’s a break even at best. There’s years I’m sure it’s cost me money to run this place. To me it’s super rewarding, the kids, some of them have gone on to become captains, licensed captains, charter boat captains, delivery boat captains.”

Morgan said that once the request for proposals for the property is listed anyone, including Caslowitz can submit a proposal for it.

Caslowitz said he intends to do so, and hopes his work running the program will be considered.

“I would put in a bid and I would hope that my reputation and 37 years of experience running it without any incidents, any major accidents, suits, anything like that…I’ve served the community well for 35 years and the place has actually served the community for 56 years,” he said. “I’m OK writing a proposal, and standing on my reputation and the school’s reputation. I’m not afraid to walk away from it—I still think I’ve got a few good years in me to run it. I don’t want to see the program end when I’m done doing it, I’d like to see the legacy continue.”

If the property was to go to someone else, then Caslowitz said they would have to negotiate with the new landowners to either keep the school up and running or negotiate the sale of all of the items, such as the building on the property, the boats, and other equipment.

Because of this Caslowitz has asked parents and students who used the school to send letters to Roberts and Mayor Harry Rilling to ask them to reconsider putting the property out to a public bid.

One of the letters Caslowitz shared was from Katya Kopaskie-McClung, a Norwalk resident and mother of a student, her son Owen, who went through the program.

“At 18, Owen continues to teach summer sailing, earned his IB diploma, is valedictorian at Brien McMahon and Center for Global Studies, and was offered 3 full tuition scholarships at prestigious engineering programs at public and private colleges,” she wrote. “Bruce Caslowitz provides a foundational program for young Norwalk residents to discover an undying love for the Norwalk Islands and develop a lifelong passion for sailing. Unlike the many club racing programs here on Connecticut’s Gold Coast, Norwalk Sailing School allows young Norwalkers the pleasure of ‘messing about in boats’ at their own pace. It is old school, in the very best possible way. As we suffer the many abrupt disruptions of the pandemic, please don’t waste our city’s resources to destroy a beloved Norwalk tradition.”

Resident Laina Grillo also wrote that the program benefited her brother and daughter.

“As a lifetime resident of Norwalk and having my brother participate in the camp and work as a counselor for many years in the 80’s to my daughter attending camp for 6 years I feel it is a valuable asset to Norwalk,” she said. “The camp is well run due to Bruce and my daughter enjoys it and now is very comfortable sailing a boat. Mr. Caslowitz should be allowed to say as long as he wants to run the school and it would be very upsetting to me if he could not continue to run his business there.”

Similar to what was done to undermine the beloved and established summer camps at schools. Apparently it’s all about “progress” (money) with no regard to the value of the program to the city and the community.

Reasonable and appropriate. Expect Parks & Rec will be taking a look at other longtime “arrangements” sooner or later Not saying these aren’t great partnerships, just good practice.

Typical Norwalk operating procedure, if it ain’t broke, FIX IT!

Typical of the “new” Norwalk.
They can’t just let great things continue to be great.
This sailing camp has been great for so many Norwalk families for all these years, and now they want to change things for no “good” reason.
First the city ruins summer camps, including a very popular one run here in Rowayton by a good man/teacher, and now this. It’s clear that they don’t have the CHILDREN’s best interest in mind when making these awful decisions.

Sounds like the mayor is a “Trump in training “.

This would be awful if the Sailing School wasn’t there. For years, it’s been there, providing so much for the residents and families.

This is where Norwalk needs to make money? And yet they are giving developers tax abatements to build massive apartment buildings in our city (with a drought problem)!

Nick Roberts doesn’t get it period. Last year he came in and cancelled Skate Camp, another program that has been an integral part of the lives of many Norwalk children, and now we can’t even access the park. It wasn’t even part of the towns opening up plan meanwhile it’s about the most social distanced activity there is. Skate Parks all over CT are open, but not in Norwalk. Even NYC opened all their parks. If you’re not a TRADITIONAL sport or sport program in this town you’re an after thought, you don’t count, or you days are numbered. This kind of assault on our programs has got to stop!