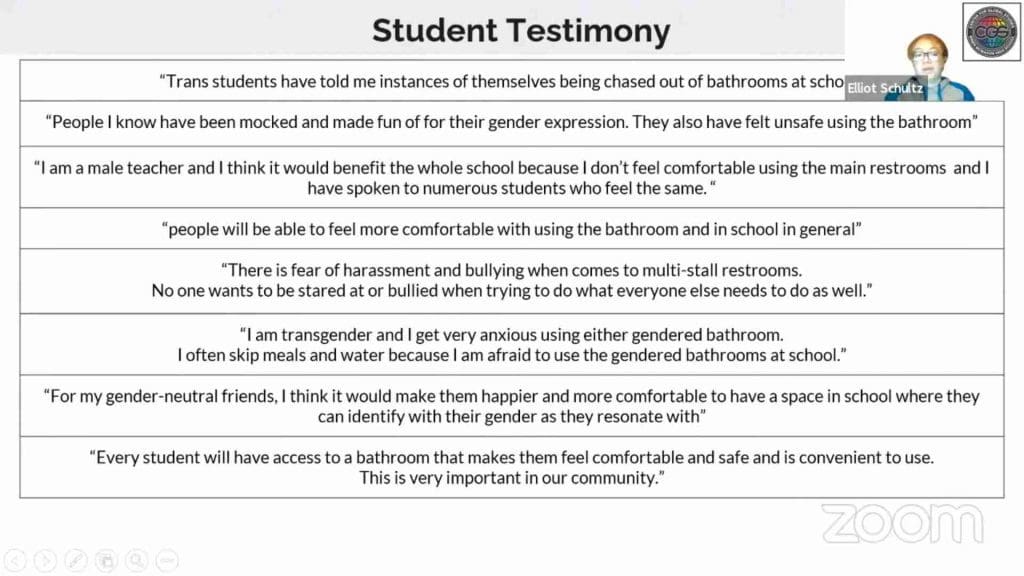 Center for Global Studies (CGS) junior Elliot Schultz speaks to the Norwalk Board of Education on March 15. The quotes presented were gathered in a survey of high school students district-wide.

NORWALK, Conn. —  A year ago, Norwalk parents won a promise from City leaders to fix up middle school bathrooms at a cost of $1.5 million. Now, with students campaigning for gender neutral bathrooms, most of the work is on hold.

About $180,000 was spent last summer to make improvements at Roton, Nathan Hale and West Rocks middle schools and preparations were being made to continue about $800,000 of work in the coming months, but a presentation made recently by Center for Global Studies (CGS) students made to the Board of Education derailed that for now, said Building and Facilities Manager Alan Lo to Common Council members recently.

Single occupancy bathrooms, whether in the form of gender-neutral bathroom or a family bathrooms, are a common practice in many public places, including professional businesses, said CGS junior Elliot Schultz on March15.

“They exist to make it more comfortable for the people that need to use these facilities,” she said. “Furthermore, OSHA’s best practices are to provide prompt access to appropriate bathroom facilities for everyone, regardless of their gender identity. Within our school, both students and teachers have expressed that they avoid main restrooms for a host of reasons.”

Opinions were gathered from high school students district-wide, and some said they feel harassed or bullied when they go into multi-stalled bathrooms, reported Angel Serrano, another CGS student. Avoiding restrooms means less handwashing during a pandemic and there’s a mental health factor, she said.

A survey completed by The Norwalk Partnership in June found that Norwalk’s teenagers are suffering due to the pandemic, as nearly half of Norwalk’s high school students reported being depressed. LGBTQ (lesbian, gay, bisexual, transgender and queer) students were at highest risk for depression (70%) and suicide attempts (20%).

Students who identify as non-binary or as LGBTQIA+ (lesbian, gay, bisexual, transgender, queer/questioning {one’s sexual or gender identity}, intersex, and asexual/aromantic/agender) may feel very uncomfortable in traditional bathrooms, a CGS freshman said. They may face verbal abuse and physical harassment and may let “those degrading comments get to their head, which can lead to skipping meals and to refrain themselves from using the restroom.”

Single stall bathrooms would allow for privacy and since handicapped accessible bathrooms are already required, “Why not just have the extra step of making a gender-neutral bathroom?” asked CGS junior Patrick Willis Feagin.

“Misbehavior within the bathroom would be crushed significantly compared to a regular bathroom,” because of vaping detectors and the unlikelihood of people congregating, he said.

“We want the district board to help us get this project started. We don’t want it to be more than just a proposal. We want this to actually become a reality… across the entire Norwalk Public School district, and eventually, not even just across the Norwalk public school system, we want to get this as far as possible to make this a mainstream thing,” Elliot said. “We want you to help us create a safer and more welcoming school environment for our community.”

BoE Vice Chairwoman Diana Carpio asked why, as the students had said, both students and teachers are avoiding the bathrooms.

“The situation at the bathrooms is simply dilapidated, to say it best. There was only one working faucet within one of the bathrooms, which is really awful,” Patrick said. “… There’s just an utter disrespect by much of the community for using the bathroom or you know, treating it properly. I’ve gone in there and literally seeing oranges filling a toilet, fresh oranges from the lunch. And I think that it’s just utter disrespect to the bathrooms. Sometimes I go in there, and there’s paper towels all over the floor.”

Moreover, hateful graffiti targets the LGBTQ community, “or there’s racial slurs written on there,” he said.

Teachers say they don’t appreciate “much of what happens in the students bathrooms,” Angel said. And as for LGBTQIA+, “if you don’t feel comfortable using a gendered bathroom for a multitude of reasons that you can have, there’s simply nowhere to go. So people often just try not to use the bathroom all day.”

Center for Global Studies Director Julie Parham said the presentation was just an introduction to the topic, originating in a civics class where students developed “a very specific proposal for how gender-neutral bathrooms could work in a school.”

Administrators provided single occupancy bathrooms that could be entered with a key, but “that’s really hard,” the “awkwardness” of getting the key and then running across the school to get to the facility, Parham said. “It’s not OK, we can do a lot better than that. So we have things in place, we do have safe spaces, but they’re not as accessible as they should be.”

“I think gender-neutral, single-occupancy bathrooms are a pretty common thing. I mean, everybody’s house has one,” said Norwalk Board of Education Chairman Colin Hosten.

NPS needs to develop an action plan to support the request district-wide, given the challenge of designing new school construction and large campuses, Norwalk Superintendent of Schools Alexandra Estrella said.

Lo, on April 6, said he’d spoken with Assistant Superintendent of Business and Operations Sandra Faioes, who felt it would be better to wait a year on the middle school bathroom work. Better to not spend $800,000 to renovate bathrooms ahead of a plan to accommodate the request for gender-neutral facilities.

The $1.5 million assigned to the bathroom project comes from the 2021-22 capital budget, money that is raised by selling bonds. Norwalk Chief Financial Officer Henry Dachowitz has warned against the City borrowing too much, predicting that Norwalk will lose its Triple A bond rating within three years given the plans for new school construction.

If Planning Commissioners visited the Nathan Hale Middle School bathrooms “you would not get the stench out of your nose,” said citizen Jennifer Romano.

He wouldn’t consider it “cosmetic” work at Nathan Hale, Roton and West Rocks, because “the things we’ve worked on is good for 10-15 years,” Lo said. Ceilings were painted or replaced, light fixtures were replaced, as were partitions, toilet fixtures, faucets “and on and on.”

“It’s not a renovation project by any means. It’s really, it’s a improvement,” he said. It’s “not a Band-Aid” but at the same time, Roton is a 1950s building.

Phase One was for $180,000 of the work because it’s difficult with the capital budget process ending in April and the money being available in July, he said. “The sequencing never works.”

A few bathrooms at Nathan Hale and West Rocks are in “pretty bad shape but we were going to leave it to this summer to renovate,” Lo said. “We hired an architect recently and we start designing and drawing with anticipation we would go out to bid this month. … When the students came up from Brien McMahon to bring this item up, there was a lot of support from Board members to see what we can do and then ‘start looking at it’ kind of thing… we postponed for one year for that reason.”

Change orders are very costly, and there are many lavatories in a large high school, so this is no small matter. Also, equity expectations won’t allow planners to require those seeking gender-neutral facilities to have to travel farther than other students/staff who need to use the lavatories.

The cost of the quarter billion dollar boondoggle will become even higher.

So sad we as members of the human race, have got to a situation as who or what can releave themselves in a bathroom??? So Sad!!

Based on what I’m hearing — If the administration is naive enough to put in single bathrooms expect more sex between students than is currently going on. The stories out of middle school are shocking. Instead of burying their heads in the sand maybe, just maybe it’s time to hold students accountable for their actions. This project would be doubling down on completely failed policies. These students are freaking kids for goodness sakes. I find this unbelievable.

Yet more evidence our City schools suffer “competence problems”. Anyone paying attention to grads failing to meet CT Edu requirements ? No. As long as they get a certificate we’re doing OK.

Will our BOE standouts propose 3 bathrooms for each floor: male, female, neither/neutral? Don’t forget the beach and City Hall too. A Dem City has to keep up with the “times”.

Rather than genders on the door, why not go straight to functional. I propose the following:
– Sit (to pee)
– Stand (to pee)

Focusing on “proper bathrooms” rather than our long running failure to educate our kids so they meet CT Edu Dept graduation standards as do our surrounding towns helps explain why our City with its once proud City has fallen on hard times. Not only do we have failing public schools but City officials show no interest in securing a 4 yr college. We’re CT’s only City without one. For Norwalk a CC is good enough for our kids.

Sorry, there is no such thing as “gender neutral.” There are males and females. This should have been learned in Science class. No disrespect intended for folks who believe themselves otherwise, but society shouldn’t have to accommodate their confusion. Most people have had it up to their eyeballs with this Marxist “woke” mania which in itself promotes division, not community. The town of Norwalk should put whatever funds are available to promoting basic education. This might start with hiring teachers who can read and write. I once received a letter from one of our high schools that could have been used as a grammar test. How can we expect our children to learn properly when the their teachers are poorly educated?

All we hear about today is using the correct pronouns when laughably both teachers and students can’t even use basic pronouns correctly. If I had a dollar for every time I’ve heard, “him and I” I would be a rich man. Someone has to stop the madness!

Stop this insanity! I agree with Seve. You are either male, female or confused.

Sounds like we have an administration run by the Middle Schoolers.

If you don’t want to use the the boys or girls room (yes these are boys and girls and not men & women) use the ADA bathroom.

Last i checked- middle schoolers don’t have enough experience or knowledge to actual understand enough of the world or their bodies to make these decisions.

and – it is the administrations responsibility to protect all children- including the majority.

All of this is part of a broader radical, left-wing propaganda campaign to destroy our freedoms, destroy America, remove families abilities to have a say in what their children are learning and how they interact in school. These people would have you convinced its normal to put a teen on gender transition drugs!!

I quote Sarah LeMieux a prior Norwalk BOE member from the Hour::

“America has developed a racist system and structure that negatively impacts black and brown kids,” Chairwoman Sarah LeMieux said. “I don’t think we need to do more root-cause analyses.”””

These statements are patently FALSE but all too common from the “woke” / BLM / LGBTQIA ETC ETC crowd. Sarah please point to an actual REAL POLICY that still exists especially in Norwalk …a diverse place in many peoples opinions where people are NOT racist ….

Don’t get me wrong people should live their lives freely but this is part of a more sinister motive here , propaganda…with the antifa / BLM / communist crowd….

IF you hate America then leave it ? So people can live in peace with our Constitutional freedoms… another thing trampled on lately with this pandemic and stuff.