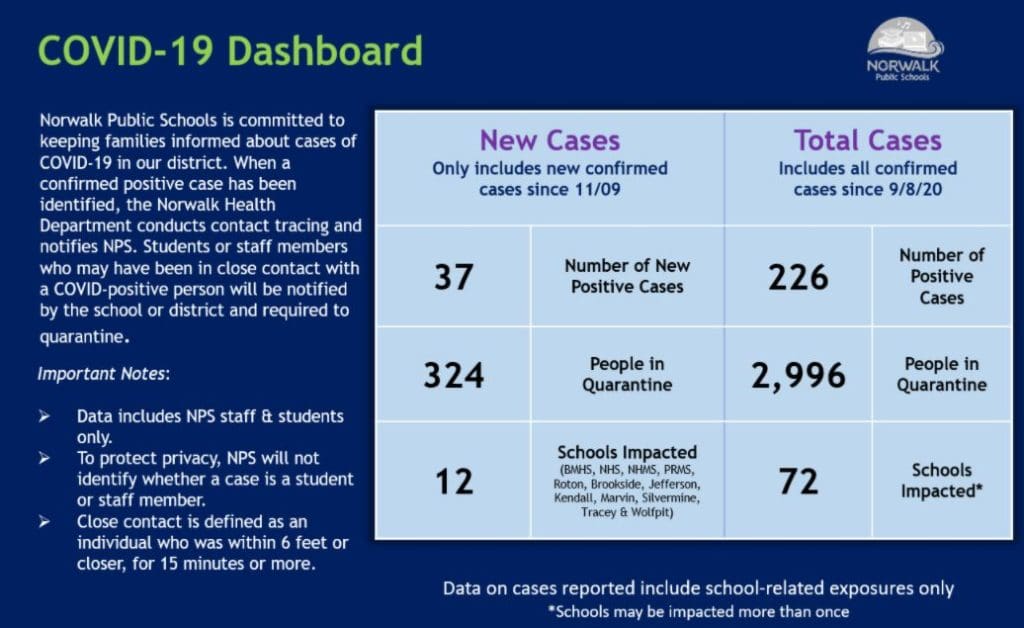 NORWALK, Conn. — What happens when there is a positive COVID-19 case in Norwalk Public Schools? That was a question Norwalk Superintendent Dr. Alexandra Estrella and JoAnn Malinowski, NPS health services coordinator, attempted to answer at Tuesday’s Board of Education meeting.

“I know that the community has voiced concern about the process and how we engage in contact tracing service, especially when there’s a second point of contact,” Estrella said. “I know a lot of parents have expressed concern around this. And I think providing clarity will help all of us.”

Malinowski said that her department along with the City’s Department of Health have been doing contact tracing seven days a week. The process starts as soon as there is a verified positive case, she said.

“And once we have that, then we look at who the child has been exposed to—or the staff member—whoever it might be, whether it’s on a bus, after school, sports, whatever it may be,” she said. “And then we take a look at all of that—(we) go by date, go by symptoms—it’s not that simple when you’re actually doing it. And then we ask people to quarantine.”

If a family has a child that needs to quarantine because they have been exposed to someone who tested positive, the parents or guardians receive a live phone call, so if they have questions they can be asked and answered on the spot.

“There are nurses and school health aides that are making these phone calls seven days a week, so we can answer your questions when we have that particular parent on the line,” Malinowski said.

If a child is quarantining because they may have been exposed to a positive case, the entire family doesn’t have to join in that quarantine so long as that child does not become positive, Malinowski said.

Malinowski emphasized that students or staff members cannot “test out of a quarantine.”

Estrella said that the school district is taking more measures than are recommended by the CDC and the state health department.

“In terms of the individuals that we ask to quarantine, we’re asking anyone that is in the room, even if they are beyond six feet from the person that is positive, to quarantine,” she said. “So, we are taking additional measures that go beyond the expectation of the CDC as well as the state. We also have to keep that piece in mind that we’re aware still be taking measures beyond the expected measures that the state has articulated to ensure that we keep everyone safe.”

If that child who is quarantined does test positive, then that is when things change and the family must quarantine, she said.

“If that child that’s quarantined turns positive, that’s a different set of circumstances because now everybody from that day that the student has symptoms or has tested and became positive the other people in the household need to quarantine at that point,” she said.

For students who do test positive, Malinowski said that child “needs to isolate in a separate area of the home.” However, she emphasized that everyone who is at home with that child also should quarantine as a precaution.

“If there are other children, siblings, or mom and dad or grandma and grandpa that live in the house, or aunt or uncle, those people in the house need to quarantine if that student is positive,” she said.

Dates are very important when it comes to determining who the positive case may have come into contact with, she said. For example, Malinowski said if a person tested positive on November 10, they might go back two days and trace close contacts during that time.

Malinowski said that the precautionary quarantines have worked for the most part, provided everyone listens and stays home.

“And I have to tell you, we really have people quarantining and we have not had many people turn positive, as long as you stay home,” she said. “That means no playdates, no going out, no going to the grocery store, the only place you can go is actually to go for a test or see your provider.”

Board of Education member Barbara Meyer-Mitchell said that she was worried about community spread due to testing delays, particularly if those who are exposed can’t be separated from their family members.

“In the event that a family circumstances are such that that child cannot be distanced or separated from the rest of the family because of their living conditions, do we then ask siblings to quarantine?” she asked. “Many siblings share rooms. I know what you’re saying is we need a positive case in order to quarantine. But my concern is that we are having significant delays in obtaining testing and in getting testing results right now. And that we could see further community spread if we aren’t more proactive.”

Malinowski said it depends on the family’s situation. High school and college students can often separate themselves more from family members because they’re more independent, she said.

“Say for instance, you have a mom that has two children, right? And say one of them is a baby and say the other one is four or five years old, it’s going to be very, very difficult for that parent to isolate from those two children,” she said. “So those two children really should be home with their parent—they should not be going to school. But if you have a high school student, or a college student, I mean, you pretty much know to keep your distance if somebody is quarantining (out of precaution.) If it’s positive, remember, if you have a positive case in the house, everybody has to quarantine. Okay, that’s the difference.”

Board member Sherelle Harris, however, asked if the district should be more proactive to prevent spread.

Estrella said that she understood Harris’ concern and that she would bring it to the health department, but emphasized that the district was already taking more than the recommended precautions.

“We are already quarantining an enormous amount of individuals as an added precaution,” she said. “So adding that additional layer will mean that we’re unnecessarily quarantining enormous numbers of individuals within a school or the system at large. But it’s something that I will bring back to the Department of Health and continue to have the conversation and express the concerns from the board. But right now, that is not the recommendation of the Department of Health.”