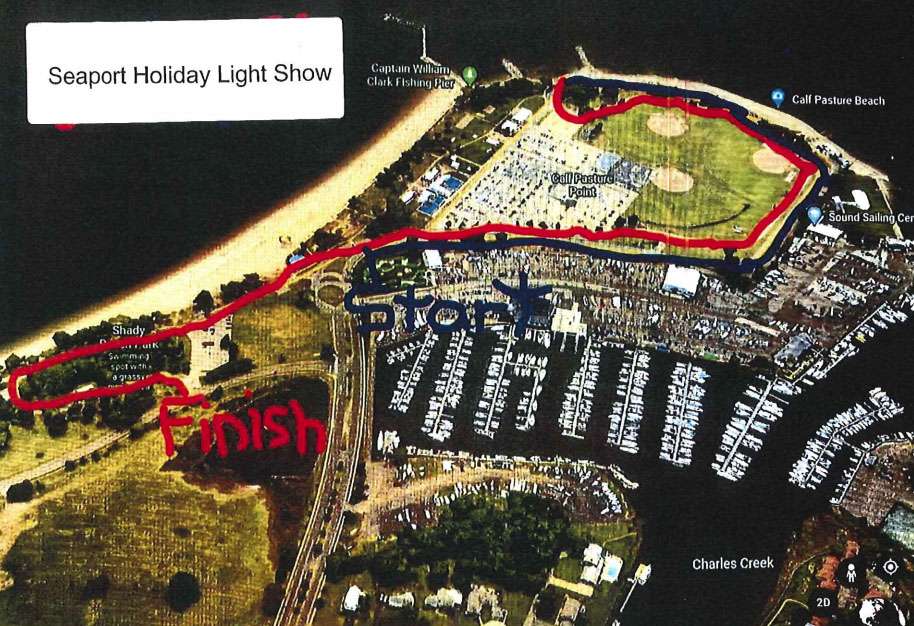 NORWALK, Conn. — Cars would line up on Calf Pasture Beach Road in November, waiting to enter a holiday light show, in a plan developed by the Norwalk Seaport Association, working with City departments.

Attendees would need to buy tickets in advance and a maximum 700 cars would be admitted on Wednesday and Thursday, and 900 Friday through Sunday. The show would begin at 5 p.m. and end at 10, leaving the beach open to the public during the day, from Nov. 24 to Jan. 2. It would be open on Thanksgiving but probably not Christmas.

Calf Pasture Beach is the only Norwalk facility large enough to accommodate such traffic, Norwalk Seaport Association President Mike Reilly and Norwalk Seaport Association Business Manager Gerald Toni told the Common Council Recreation and Parks Committee last week. They checked out Matthews Park, Veterans Park and Cranbury Park but found them to be too small. The show would be put on by an outside company.

“This will be a very high-end, well put together event. It’s going to be amazing,” Reilly said.

Their application wasn’t welcomed with warm and fuzzy open arms, as much of the conversation centered on the Council members perception that the application materials were skimpy. Reilly and Toni protested that their earlier presentation had the data that was being requested; Acting Recreation and Parks Department Director Ken Hughes countered that the Seaport Association’s May 1 email said it replaced earlier information, so he hadn’t included the previous materials in the packet for the Committee.

There was also a lot of concern about logistics. Reilly and Toni said they’d already gone over many aspects with the police department, recreation and parks and public works, and “made significant concessions.”

“We were willing to, and we have, changed the times of the event,” Toni said. “We’ve changed the days that we were going to do it. We agreed to not have any what we call walk up business or buy a ticket on site. We decided to put a time schedule in place and put people in time blocks. And then finally we agreed to limit the number of cars that could come into the park on any given evening. So, we have made significant concessions…. and we’re pleased to do so because the important thing for us was to have a successful event.”

They had thought that maybe cars could queue up in the beach parking lot but that was ruled out, he said. Keeping them on Beach Road would be better for the neighbors.

“One of the things that we did is we sent this package, complete details, to every one of the residents that live on Spar, Island Drive and Calf Pasture Beach Road. I’ve spoken with a couple of people personally, but we have received no comments pro or con, from anybody that lives on those streets,” Toni said.

Another example of logistics: bathrooms. Beach facilities are not open in the winter; Toni said port-a-potties aren’t expensive but they’d been told in previous meetings that the traffic should keep moving. “Bathrooms will cause backups,” he said, and then there’s the issue of where they would be. You wouldn’t want them on Beach Road, and the only place really would be near Ripka’s. But, neither man has seen bathrooms at holiday light shows in other places.

Nevertheless, they both get it, children get excited and need a bathroom, they said.

The Norwalk Police Department is worried about traffic, Chief Thomas Kulhawik said. In addition to signage needs, it’s likely that mapping apps will redirect drivers when traffic builds up, sending them “the back way.”

“We need ways to prevent that from happening,” he said. “…We haven’t seen any specific plans on that.”

Also, “There’s gonna be quite a few people that may not understand you need pre-tickets,” Kulhawik said. “So where do they get removed from the queue before they block up traffic?… It’s really more just controlling the flow, and making sure vehicles are traveling where we expect them to travel, that’s  really where our concern, but make sure that Beach Road stays open for the residents to access, Cove Marina and also the side streets there.”

Emergency access to the beach needs to be maintained, Norwalk Police Deputy Chief James Walsh said. “We have to have one free lane, just in case we need to get in there and get out of there for some reason.” He also emphasized cones, signage and messaging.

They’ve had time to think about all of this.

“We started this project last summer, with the intent of doing it in December of 2020,” Toni said. That didn’t work out and the Seaport Association moved on to 2021.

“It’s an idea that I had, that we researched,” Reilly said. “…It’s not something that is brought to us.”

“We are putting up all the money, we’re taking all the risk,” Toni said.

Three potential vendors are lined up, and it’s no different than hiring contractors for the Oyster Festival, Toni said.

“It’s a big event and we’re going to need help and it was always our intention, and we spoke of it from beginning, to bring other nonprofits involved to make them involved in the event and allow them to participate, both in the workload in some of the profits,” Toni said. “…We are in this, of course, for the Seaport but we’re also here to help the community.”

“This is a substantial investment for us, but we want to get back to the community as well by helping other non-for-profits,” Reilly said. “…I think we have a good plan. And I think this would be a great thing for Norwalk.”

“They had thought that maybe cars could queue up in the beach parking lot but that was ruled out, he said. Keeping them on Beach Road would be better for the neighbors.”

I would like to correct the above comment attributed to me. The first plan we (Seaport) submitted showed cars being checked in at the old P&R “guard shack”. City officials objected indicating concerns about lines of traffic up Calf Pasture Beach Road (CPBR). With that input we created a new plan which would allow cars to drive directly into the main parking lot @ Calf Pasture Beach. Here we would queue up cars, check tickets then release groups of +- 100 cars into the event. Given we could hold about 350 vehicles “inside” the park it would eliminate long lines on CPBR. At an onsite meeting at the Beach that plan was rejected based upon concerns there were two points where traffic “crossed paths”. That is correct but we believed it was manageable with NPD officers as the cars will be moving at very low speeds following specific paths. (Compared to duty on West Ave. during construction we are confident NPD can help us put together a safe workable plan). While this plan added cost to the event, we believed it was the best option to minimize the impact on the neighbors.
This application process has been long and difficult at times, but that is understandable as it is new and every time we meet new issues are raised and we work to get the best solution for both the NSA & the residents of Norwalk. For example, at the last meeting a member of City Common Council asked about carbon off-sets for the +-17,000 cars that would visit during the 6 week event. I answered honestly that we never considered it but do believe it’s an important issue. We will be reaching out to City officials to understand how the City manages this, looking for guidance and making this part of our next proposal. This is how we all learn and grow…just imagine if some group of people asked to do a three event putting 50,000 people in Veteran’s Park…we doubt it would be approved after a 30 minute meeting.
Thank you,
Jerry Toni
Business Manager, Norwalk Seaport Association

We used to have the fireworks where the traffic was a huge free-for-all cluster****. Selling “x” amount of tickets seems like it won’t reach the fireworks status and much more manageable.

That includes all their concerns concerning emergency access, using cones, electronic and other signage and messaging. I don’t ever recall having a lane free when the fireworks were over…it was just jammed. Besides, it seems like they would address these issues with the contractors, professionals.

A great thing for Norwalk? How about asking all of the residents of East Norwalk? The chief isn’t the only one concerned about the traffic in East Norwalk. The residents, all of my east Norwalk neighbors are too! This will be a nightmare!

I am in agreement with Scott. The light show would be a menace to the community, increasing air and noise pollution as well as litter. In the warmer seasons traffic congests the area already.

Just nuke East Norwalk and get it over with. The death by 1000 cuts approach is getting old.