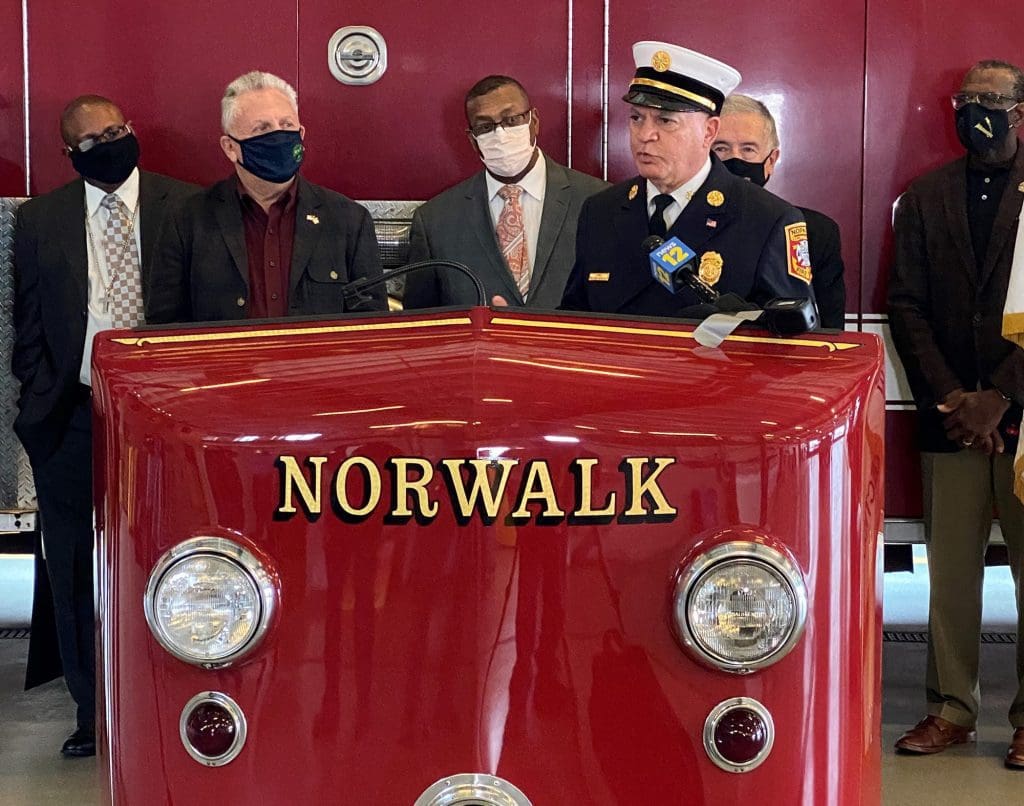 NORWALK, Conn. — Norwalk is hiring 20 firefighters by the end of 2022 and wants the word to get out – now is the time to apply.

“We want all the residents of Norwalk who have considered this profession before to be aware that it’s within reach for them, and that it’s currently happening and they have the opportunity to apply and to become a Norwalk firefighter,” Assistant Fire Chief Ed McCabe said at a Thursday press conference.

Attending the event were the Norwalk pastors the Rev. James Newman, the Rev. Roosevelt Ewell, and the Rev. Richard Wesley Clark.

“What we’re trying to do here is partner with our community to attract a pool of candidates who are demographically similar to the city of Norwalk,” Mayor Harry Rilling said. “We want a diverse pool of candidates, and make sure that we continue that fine tradition of the Norwalk Fire Department.”

Twelve of the positions are available this year.

The starting salary is $65,476. Candidates must be at least 18 years old on the date of the written test, which is May 22. Applications will be accepted until May 10 through FirefighterApp at https://bit.ly/NorwalkFD2021App; there is a $25 nonrefundable registration fee.

Norwalk residents can attend a Zoom informational session in April to get an overview of the application process and ask questions.

“Our goal is to reach every individual in the city of Norwalk who would like to become a firefighter, or who was thinking of becoming a firefighter,” Norwalk Fire Chief Gino Gatto said.

Newman pressed that point. New Haven residents get “10 points upfront” when they take the test to become a New Haven firefighter, he said.

“We agree with that 100% except that our …testing process does not give points for living in the city. I don’t think that’s consistent with the current state of the law,” Director of Personnel and Labor Relations Ray Burney said.

“They may do it, but it’s not legal,” Rilling said.

“Right now, we have 12 vacancies, and we know that by the end of next year, we’re going to have another 14 vacancies,” Gatto said. “The city likes to keep six vacancies. So that would equate down to 20 positions.”

The list is good for two years with an option to be renewed for a year, so it’s possible that 30 people who apply now will become Norwalk firefighters, he said.

Norwalk discarded the results of its last firefighter exam in August after a cheating scandal prompted Assistant Fire Chief Chris King to resign.

Gatto said the department is not short-staffed.

“In the past, we’ve had upwards of 20 vacancies and the department handled it. We just have to hire overtime to fill the jobs but no, I don’t anticipate any problems,” he said.

“We want to make sure that the fire department and the men and women in the fire department have adequate staffing,” Rilling said. “You know, we don’t want to get into a point where it compromises their safety or the safety of the of the people of Norwalk. So we’re going to be watching that very, very closely and doing everything we can to bring people in as quickly as we can.”

Norwalk is going to try to get candidates into the September Fire Academy class, Gatto said. The next class is in February.

Anyone who is already a firefighter elsewhere is welcome to take the exam, Rilling said. Then they may not need to go to the academy and will quickly be onboard.

Outreach is a challenge in the pandemic and the emphasis is for online interactions, Assistant Fire Chief Albert Bassett said.

“We encourage as many people as possible to get involved,” McCabe said. “Again, the online process is very easy, very, very streamlined.”

“We want to have as many residents as possible apply so that the pool is chock full of Norwalk City residents, and they can take the test and get on the list,” Burney said. “And we can’t take them just because they’re Norwalk residents. But the more that come out, the more likely it is we’ll have a pool of candidates that includes a substantial number of Norwalk residents.”

“Putting in an application for the minority community is not a big deal,” Clarke said. “However, the problem is getting our people to qualify. As you reflect on this, we will continue encouraging black and brown people to put in their applications for the position. And of course, everyone.”

“If the candidates that are thinking about applying, exclude themselves from this wonderful position because they don’t think they know enough about firefighting, do not let that be a worry for you because with the testing will not be complicated,” Fire Commissioner Oscar Destruge said.

Sometimes in Norwalk we just arent practical. The mayor was the one that took away extra points to the local residents. If your house is on fire and it is a life or death situation you will want a person that doesnt rely on the guy in the front seat giving directions from waze to know where he is going. When my mom passed away a few years ago the first firefighters through the door were people i knew from living here all my life. That was extremely comforting. While i am sure the firemen are enjoying the overtime they are being put to the test by working many hours to cover for the shortage of employees. While its ok that we strive for diversity we should hire the best people for the job. Black, white, female, and latino shouldnt be a major factor. Physical capability is a strong part to this profession and should be equally important.One of the reasons i live here is for the hospital in town, fully staffed police force, and a great fire department. Giving a few points to people that call Norwalk home will benefit all of us.

Are they also going to remove the anti semite Patrick St. Onge from his position. He made multiple anti semitic slurs and abused a Jewish worker in the NFD and they moved him to a department closer to my temple…. see here
httpss://www.ctinsider.com/news/thehour/article/Chief-Norwalk-firefighter-suspended-transferred-15442700.php

See here another article. Thanks Nancy for always convering! https://www.nancyonnorwalk.com/norwalk-fire-department-lieutenant-suspended-after-anti-semitic-comments/

Gatto said
“The city likes to keep six vacancies” aka built-in overtime for the staff.
and
“We just have to hire overtime to fill the job”
In the real world as in the private sector vacancies aka overtime tend to get a manager aka fire chief fired.