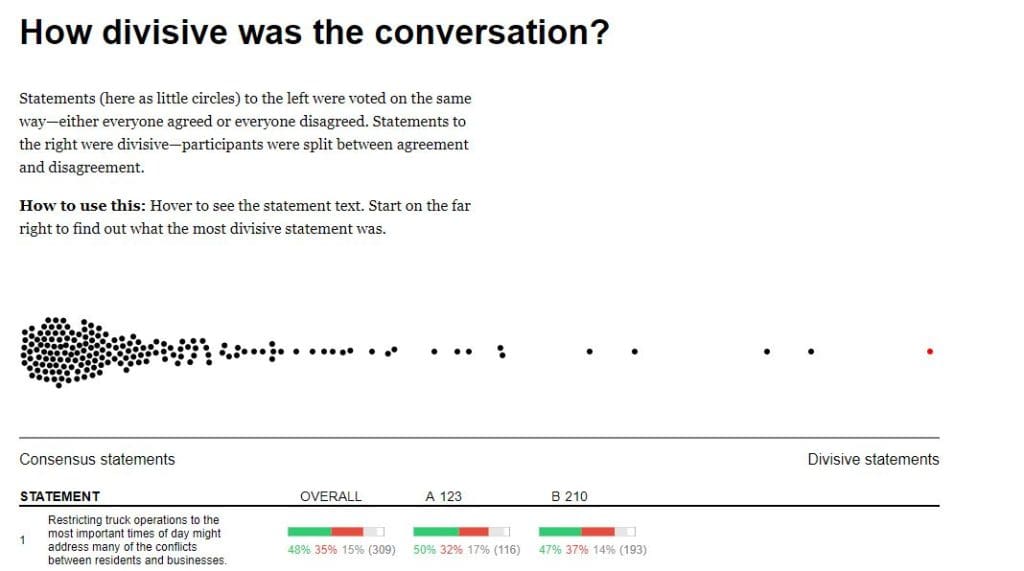 NORWALK, Conn. — Ever taken a survey where you submit the questions? Well, you can now.

The City is seeking its residents’ opinions on its industrial zoning. The survey, posted by the consulting firm Utile, had less than 50 statements up for a vote but the total is up to 185 Wednesday evening.

The idea is, participants add their own statements. Then others agree, disagree or pass.

“The intent of the survey is to get feedback on peoples’ thoughts and concerns related to industrial zones, the uses allowed and the types of businesses that should be targeted,” Planning and Zoning Director Steven Kleppin said in an email. “It is not your typical survey which asks questions and total the results.  It is meant to be an interactive discussion where the response changes based on responses.  In addition, people can track and view the conversation as it unfolds.  The survey runs through the end of the year.”

The City is fishing and here’s an example of the bait:

Do you agree? Disagree? Or pass?

The City hired the Boston-based consulting firm Utile in June to shed a “fresh set of eyes on the city,” in the words of Common Council member Darlene Young (D-District B), who helped select the company as the winner of a $100,000 contract. Rather than folks with a long history of working with Norwalk, Utile is a new to the city, she said.

“Everybody else seemed to have a very similar formula on how they were going to pursue the project,” Kleppin said, during the June discussion. “And I think it would have ended up with it with a good end product, but Utile was approaching it a little bit differently in terms of how they, you know, vision the study going, in terms of some different outreach methods, as well as what they thought the outcomes could be.”

It’s time to look at, “’What do we want to use these zones for going forward? What’s the best use of land? Where should we draw the boundaries for these zones? How do we differentiate some of these uses in there? Are there better ways to handle the conflicts we have between the residential neighborhoods and, and the commercial uses?’” he said. “And one of the goals is to not drive businesses out of Norwalk. It’s just a way that we can best utilize the land going forward and hopefully accommodate all the businesses that want to locate to Norwalk.”

Kleppin said he was hoping the drive would come up with good ideas and not generate contention.

The feedback so far

Nearly 400 people have voted, as of 1 a.m. Thursday. While some of the resultant statements pertain to Zoning, many are off topic and it’s clear that East Norwalk is taking the opportunity to protest the Norden Place proposal. There are also objections to the Connecticut Department of Transportation’s plan to use Manresa Island as a construction site for the Walk Bridge project.

So how will the off-beat feedback be factored into a study on industrial zones?

“I think the overall structure of the survey tries to account for that,” Will Cohen of Utile said in an email, explaining:

Utile’s survey is grouping participants into “A” or “B,” based on their responses. There’s no clear label on what the grouping means, but the report page allows you to see results:

A majority of participants passed on these statements:

Kleppin, in early December, said Utile has also been conducting interviews with area stakeholders “on what they see in terms of industrial growth, the challenges, the opportunities, issues with land use regulations, issues, they may have the city how the city could help more.”

The consulting team will consult the Harbor Management Commission, the Norwalk Redevelopment Agency and other groups, he said. “That’s all going to be occurring while we’re starting to rewrite Zoning regulation. So the outcomes from that study will feed right into the broader zoning analysis that we’re going to do over the next 18 months.”

I went to the zoning map and could not find key to color Legend-any hints as to what and or where it is? Thank you.

Thoughts on the Industrial zone? Start by changing the zoning laws to reflect our strengths.

Industrial uses in the Southwestern Fairfield County area are not practical due to two main reasons – the cost of labor and the cost of land. Why locate here when central/eastern CT is full of low-cost industrial options, both hi and low tech, and boosts an excellent skilled workforce at a lower price point.

But what is in very high demand here are small contractor yards suitable for the trades – a quarter acre +/- lot with a garage or two on site. However, this type of property is in very short supply and commands a very high premium when they transact. The reason for such high demand is, and has been, the steady and systematic reduction of industrial zoned land (the only place you are generally allowed to have contractor yards) for alternative, more profitable uses – apartment housing comes to mind. SoNo is a great example of this.

One possible solution (and killing two birds with one stone) is to modify the Restricted Industrial (RI) zone which requires a minimum lot size of 1 acre. This lot size issue creates an impossible hurdle for the trades – they can’t afford it.

Lucky for us, a very large part of Martin Luther King Blvd is RI zoned. It’s now home to underutilized, larger industrial properties (see paragraph two). It could/should be a thriving home for the many contractors and trades that need space (see paragraph four). Additional benefits – more good paying jobs and an increase in the grand list.

This will not chase away hi-tech manufacturing.

Play to your strengths, not your dreams.

Norwalk should take on industrial development so Westport, New Canaan, Wilton, and Darien can reap the benefits without the burden.

Who receives the tax dollars from these industrial developments?
Is that not a benefit?
Ask anyone selling a house in Wilton if they wish there was a large commercial tax basis.

Wake up Norwalk you want to stop taxes from rising but want to limit what can be done on commercial property.

No one wants contractors yards in their neighborhood I get it. Don’t move near a Industrial zoned lot. If you do know what is allowed and what is not if contractors yards are allowed deal with it or buy somewhere else in the city.

People want to buy houses near Industrial Zoned Property then want to try to drive the commercial businesses out so it is a quiet residential neighborhood by complaining to the Zoning Department when they are permitted uses.
Norwalk Zoning should concentrate on removing illegal contractors yards more and improving the residential zones that have been besieged by illegal contractors yards. That is a valid argument it is not zoned for it and it should not be there.

Last Nail In Coffin: Our family has owned our business and property in a B2 neighborhood since the 70s. It is B2 zoned for small businesses with small pick ups and vans. My husband is a plumber. Our property is close to a lot owned by an electrician who leases to heavy industry commercial multi-wheel, multi-tire big diesel paving rigs. The paving company is out of Seymour, not Norwalk. They don’t have their property, business or vehicles registered in Norwalk (hence no taxes here). Only the electrician is benefiting from the lease. The rest of us have to hear them warm up in the morning for 30 minutes, diesel noise, traffic, fumes and more. The same exact situation is happening at multiple properties in this area. Many out of town contractors are only leasing space for heavy industry parking – adding to traffic, noise, safety and environmental concerns. They aren’t driving customer base to the area – they are merely getting a deal on parking and enriching the property owners who lease to them illegally. There is not an inch of space left. Contractor parking is rampant (and we’re talking about garbage trucks, large tree service trucks, paving dump trucks and trailers, large landscaping trucks – not smaller vans and pick ups). There is a condo complex across the street and a school up the street. And a walking trail around the corner. This area can not handle heavy industry trucks and equipment, nor should this B2 area be one large heavy contractor parking lot. Two HUGE black dump trucks even park in the planet fitness lot? We already have an issue with brownfields in this area. These contractors should be leasing parking in Industrial 1 zones. If you start a business, you factor in parking for your large commercial vehicles and equipment in an appropriate zone, not hope that you can get away with parking them where they shouldn’t be. Now that they have been called out, these contractors are retaliating. And the businesses leasing the space are the worst offenders, because they only care about lining their pockets, not about the neighborhood, traffic, citizens or the environment because they don’t live here. They all live in Wilton, Darien etc. with their own families. But I bet if they were me living here (who has owned my business/residential property way longer than they have owned their business properties here), they’d be calling zoning too. So I’m following zoning law, calling out illegal contractor parking, and getting harassed from the very businesses that are in violation. I’m not trying to drive out the LEGIT businesses here (we want business here!), ONLY the heavy industry contractor trucks to whom they are leasing parking.