Travers: ‘No cost to the City’ 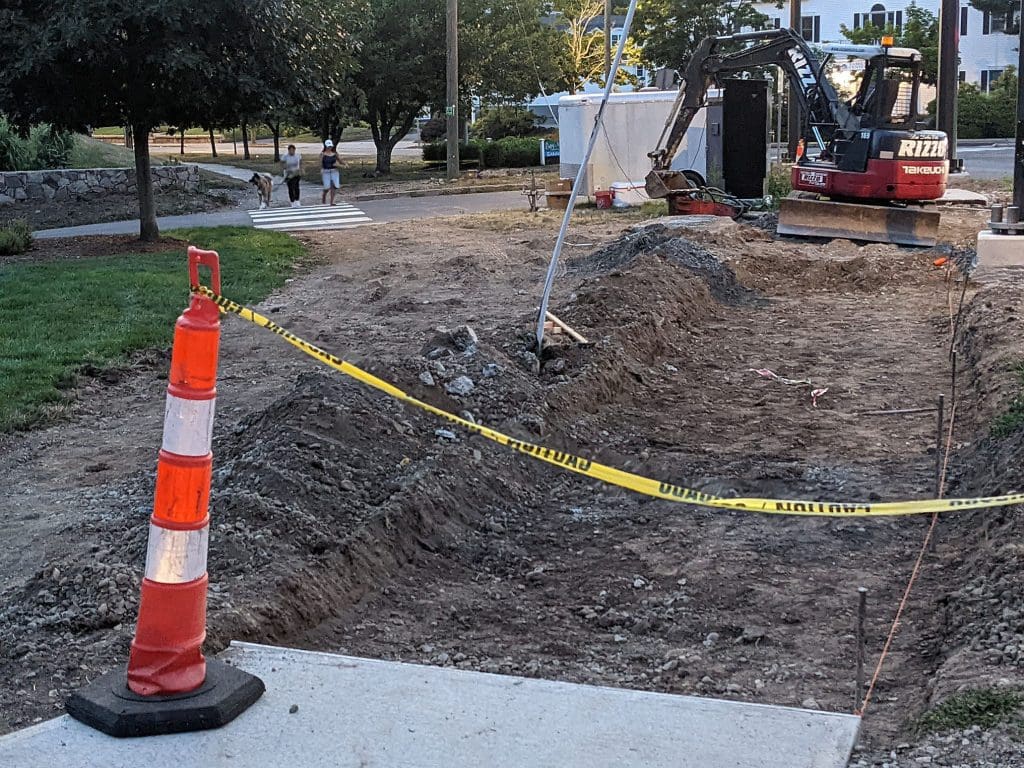 Pedestrians cross Hubble Avenue on their way to East Avenue on Wednesday. 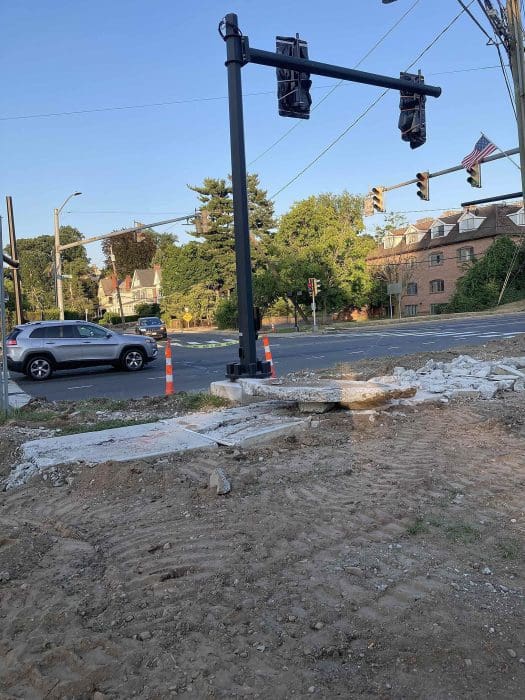 A demolished new sidewalk, Monday at the intersection of East Avenue and East Wall Street. (Contributed)

NORWALK, Conn. — A City project to improve the sidewalk at the East Avenue/Wall Street intersection has hit a speedbump.

Concrete was poured, then the new sidewalk was removed. It will likely be replaced Monday, Director of Transportation, Mobility, and Parking James Travers said.

“The former sidewalk crossing from Mill Hill and Hubble Lane to East Avenue has been dug up over a long period and then recently a new concrete sidewalk was installed that led from East Avenue to a new crossing of Hubble Lane going toward East Wall Street and to Park Street on the Green.

“Then, almost as soon as it was finished, for unknown reasons, the new (expensive!) concrete was dug up–I think it was yesterday–and now there is no sidewalk at all at that busy intersection. There is still one newly installed disability-friendly curb cut, but there is no sidewalk because that sidewalk was demolished. The new (now newly demolished) sidewalk had a curb cut too but it seems to have been dug up.”

Travers confirmed that the just-installed sidewalk was removed. He explained:

“This project is grant funded and must meet the requirements set up in the proposal.  The new concrete did not meet the project specifications and therefore had to be removed.  The subcontractor who performed this work has been replaced.  The new concrete crew is now on site and are performing the removal of the substandard sidewalk and the new sidewalk should be in place in the next couple of days.   There is no cost to the City for the sidewalk removal and subsequent replacement.” 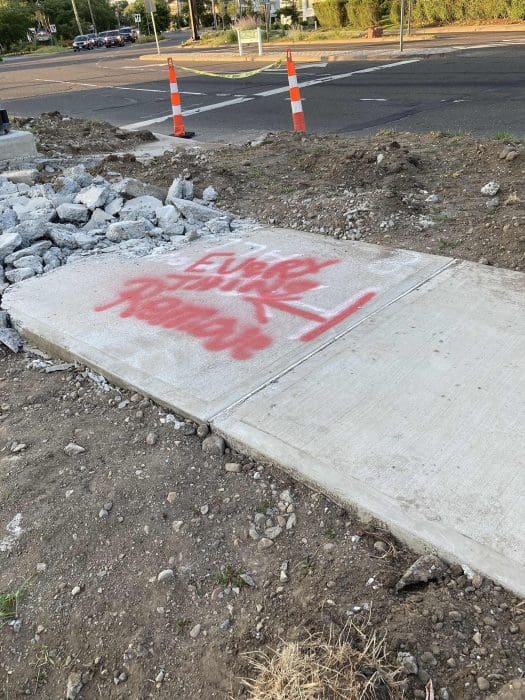 The reader said the City “has been working on the installation of huge (hideous) black traffic lights at the intersection since last October.” She alleged that “work in Norwalk is done in random spurts and stops” and there’s no way to know when it might start again. While people can walk on the dirt were the original sidewalk was, it’s going to be a “huge muddy mess” if it rains.

Again, Travers predicts the new sidewalk will be built within the week.

Travers said, “I think in short, we hold the contractor (and subsequently, they hold their sub-contractors) to the highest of standards and we do not accept any work that does not meet our specifications.  And we do not pay for any replacements to meet those specifications.  This is a fully grant-funded project and also a requirement of the funder.”

On Thursday, he said that it’s not a SNAFU, a colloquial phrase defined by Merriam-Webster as “a situation marked by errors or confusion.”

“I would think that our due diligence regarding the inspection of their work, and requiring them to build to our specifications is far from a SNAFU.   A SNAFU would have been us accepting sidewalks that at a later date failed from the incorrect installation,” Travers wrote.

He said, “The formwork for the sidewalks are in place and the sidewalks will be poured on Monday.  We worked with the contractor to try to get an earlier delivery, but unfortunately, this was the earliest that we could get.” 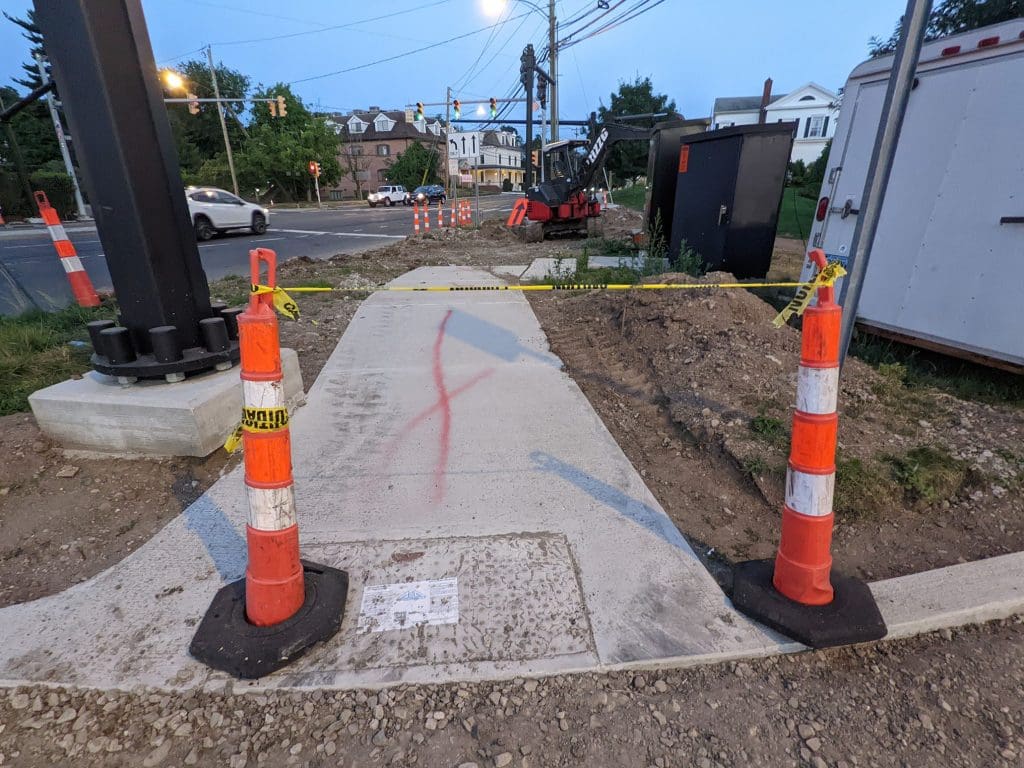 Wednesday on the East Avenue sidewalk near East Wall Street. 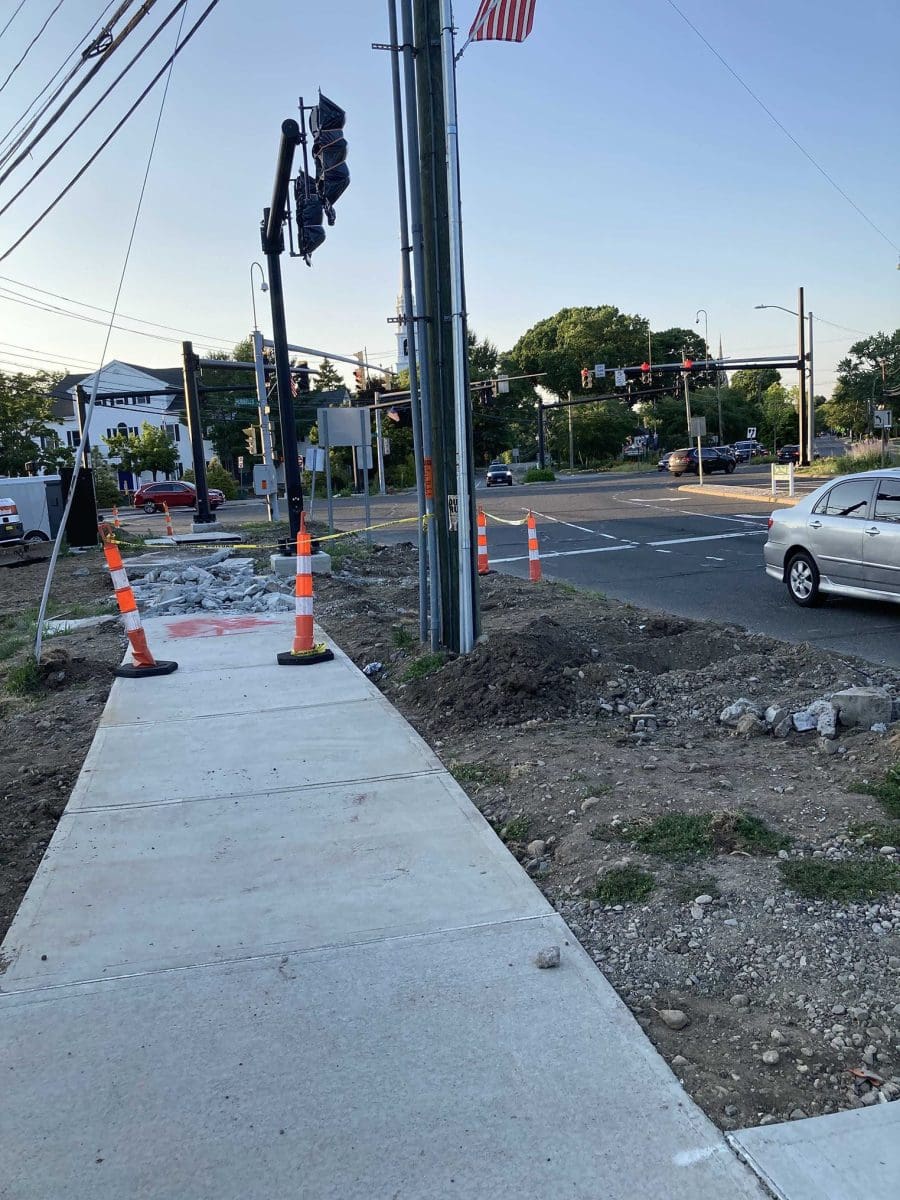 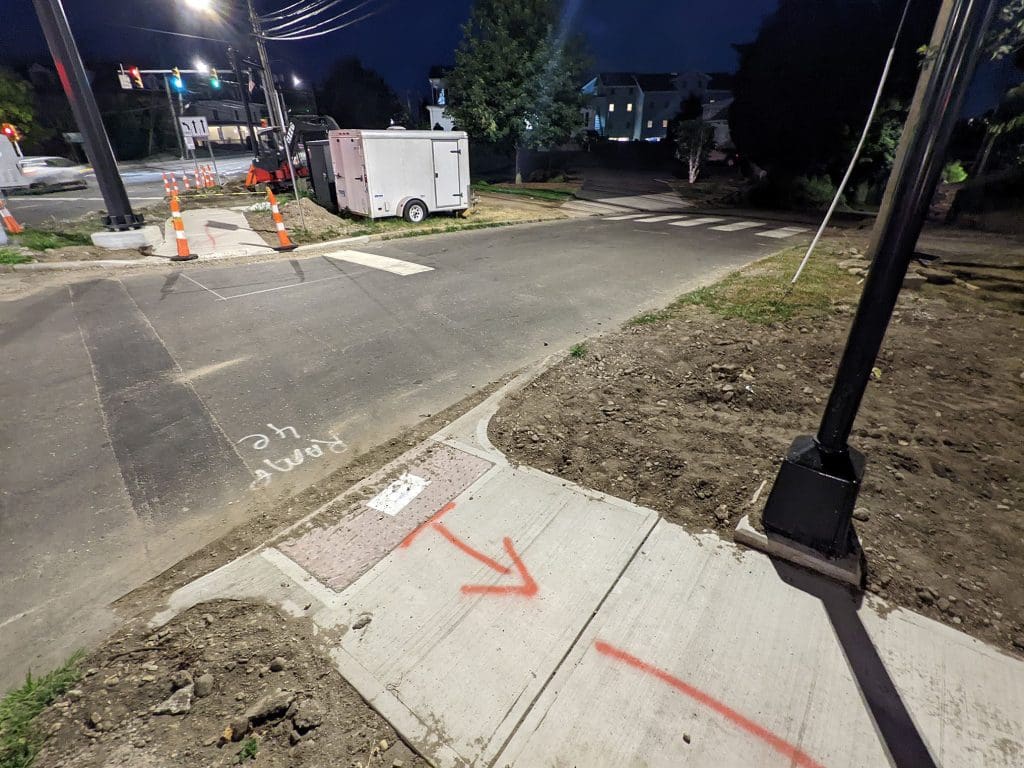 Wednesday on the East Avenue sidewalk near East Wall Street.

The new handicap sidewalk ramps work great, IN AREAS THAT DO NOT GET SNOW AND ICE!

One, they are concrete so you should not use rock salt as a melting agent on them. Salt eats the cement “cream” off and decreases the life of the concrete. The only safe melting agent to use is the more expensive white pellets which the city will never buy in the first place.

Two, the raised grip surface bumps means you cannot remove the snow and ice completely off with a shovel or snow blower.

Three, towns and cities are opening themselves up to law suits by creating slip and fall cases since the snow and ice cannot be properly cleared from the surface.

Nothing spends as easily as public money…

You should see the streets near the Merritt 7 train station. There has been construction for the past 10 months, street is torn up over and over again. Huge potholes and no paving.

What is the project name? Who is the contractor and who is the subcontractor?

SNAFU – Situation Normal All F——d Up!

Re: George, Jorge and Debra – 1) Those red bump things are for ADA compliance. They let blind individuals who use canes and seeing eye dogs (like a disabled vet) know when they have reached to end of the walkway. Kind of like Braille for a sidewalk. Norwalk seems to be way behind on installing these. The darker color is so they absorb sunlight and heat up to melt snow quicker.

2) I would imagine the law department would go after the original contractor. The contractors probably have to post some sort of insurance bond that the City would more that likely claim against.

CAN WE BUILD IT? YES WE CAN!!
Twice

What about Springhill??? City has been working on that street for maybe a year now. They pave it… only for a few days later the new pavement gets torn up again and work starts all over again. No warnings as to road closure either… drive up Springhill only to find it closed and have to detour. Would be nice if there was better planning!

PER THE ARTICLE “There is no cost to the City for the sidewalk removal and subsequent replacement.”

SNAFU, in the literal sense, serves as an perfect descriptor for the state of normalcy for almost every project the city embarkes on.

Query: would it ever be practical for a public construction or repair activity to include signage which identifies interesting stuff like: name of the authority controlling the project and a phone number to call to reach that authority, name of the contractor doing the work, expected duration, budgeted cost? Of course all of that information exists somewhere, but it seems to be concealed from casual or even determined inquirers.