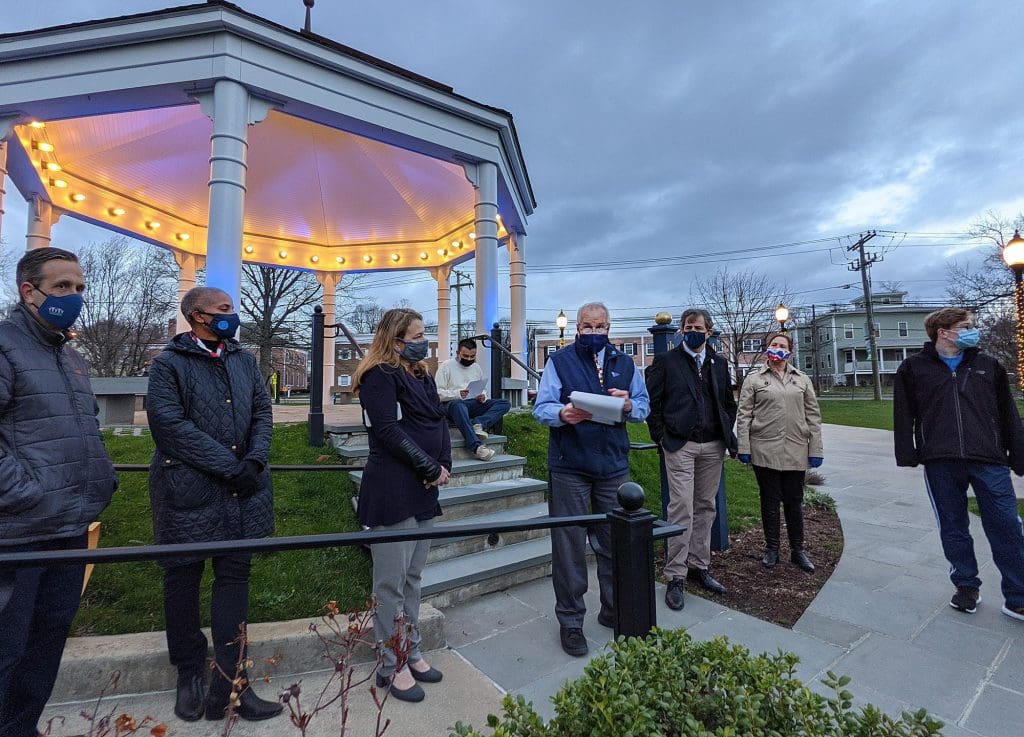 NORWALK, Conn. — One in 54 children aged 8 years old has autism spectrum disorder, or ASD, a recent study showed. Boys are more than four times as likely to have it than girls.

That’s a reason to freak out, special education activist Jeffry Spahr observed. But he said the pandemic, while “horrible,” presents an “opportunity to reimagine the workplace to make diversity inclusion and equity a reality.” 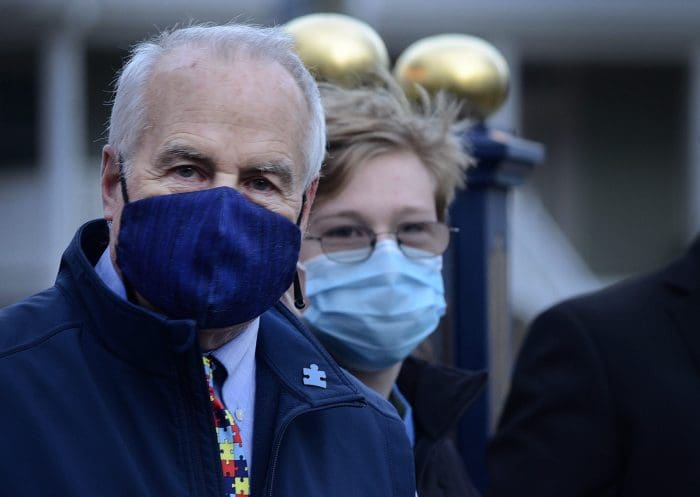 “You think a couple years ago, you could have had kids, people working from home, on, Zoom and TV, anything like that? …. The way we have restructured our workplaces, we’re going to be able to employ a lot more of people with disabilities, who are going to be allowed to stay home and to work and be productive,” Spahr said.

April is Autism Awareness Month, Spahr said Thursday, leading a “Light It Up Blue” observation on the Town Green, attended by up to 60 people. The Green’s gazebo is lit blue through April to remind passers by about Autism.

“Autism is a developmental disorder characterized by social and communication impairments, along with limited interests and repetitive behavior,” said Spahr, a member of the State Advisory Council for Special Education.

Spahr’s statistic of “one in 54” 8-year-olds being diagnosed with ASD stems from a 2016 study done in 11 states, not including Connecticut.

“The prevalence of ASD varied considerably across sites and was higher than previous estimates since 2014,” the Centers for Disease Control (CDC) states. CDC notes a wide disparity in diagnosis in different states – a rate of 13.1 per 1,000 8-year-olds in Colorado but 31.4 per 1,000 in New Jersey – and also describes disparities for Black children in early evaluation and diagnosis. “Hispanic children also continue to be identified as having ASD less frequently than white or black children,” CDC states.

Early diagnosis is key to efforts to help ASD children and “rates have been rising dramatically over the last three decades,” Spahr said Thursday. “Researchers do not know how much the raise is due to better detection, or an increase in the true cause.” 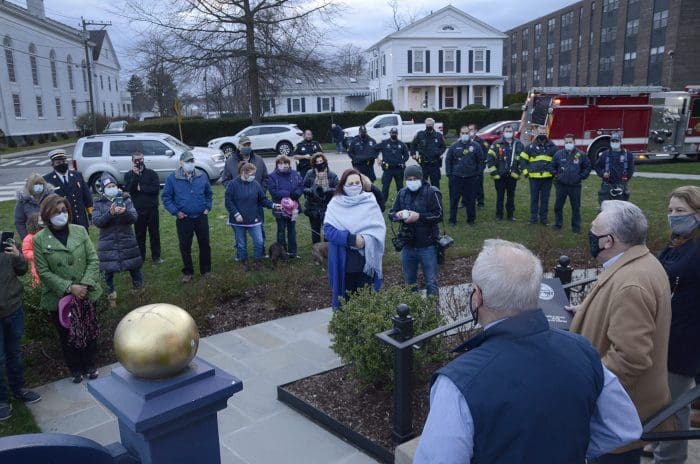 Thursday’s “Light it Up” event on the Town Green.

The “stars” of the event were two young people, diagnosed with ASD and working toward careers.

Allen Guerrero, 19, said he peels potatoes and folds pizza boxes at O’Neill’s Irish Pub. The Brien McMahon High School graduate is now in the Norwalk Next Steps program for 18- to 22-year-olds. He has learned to take deep breaths when he is upset and hopes to have a job so he can live by himself.

Frannie DiCostanzo, 20, said she is “working towards getting a bachelor’s degree in special education so I can help students with autism and other special needs live their best life.”

“Five years ago and even two years ago, some of my special education teachers would tell me that I would find it difficult to succeed in college or even have true companionship,” DiCostanzo said. “…I am proud to say that with the support of the College Steps program, I am succeeding very well in my academics and have made a lot of friends. My boyfriend, Peter, and I are in a very special relationship, as we go through similar struggles. The fact that we both have autism has allowed us to be very committed to each other, as well as providing comfort, support, and joy to one another.”

Connecticut legislators are considering a bill that would require the Department of Economic and Community Development to establish a workforce development pipeline program for persons with disabilities, Spahr said.

“There’s a growing trend to not refer to it as autism awareness, but autism acceptance, and that’s a large trend that’s going on across the country,” Spahr said. “This represents more than a shift in the terminology used, instead it aims to foster acceptance to ignite change through improved support and opportunities in education, employment, accessible housing, affordable health care and comprehensive long term services.”

* Workers with autism
The worker being a person is more important and comes before the label.

my son was diagnosed over 25 years ago, can’t imagine going thru this pandemic without daily services he needed.it was hard enough but well worth all our efforts.post grade school was tough couldn’t get work had to leave ,works with social needs people.wasn’t the support after graduation.now on his own.