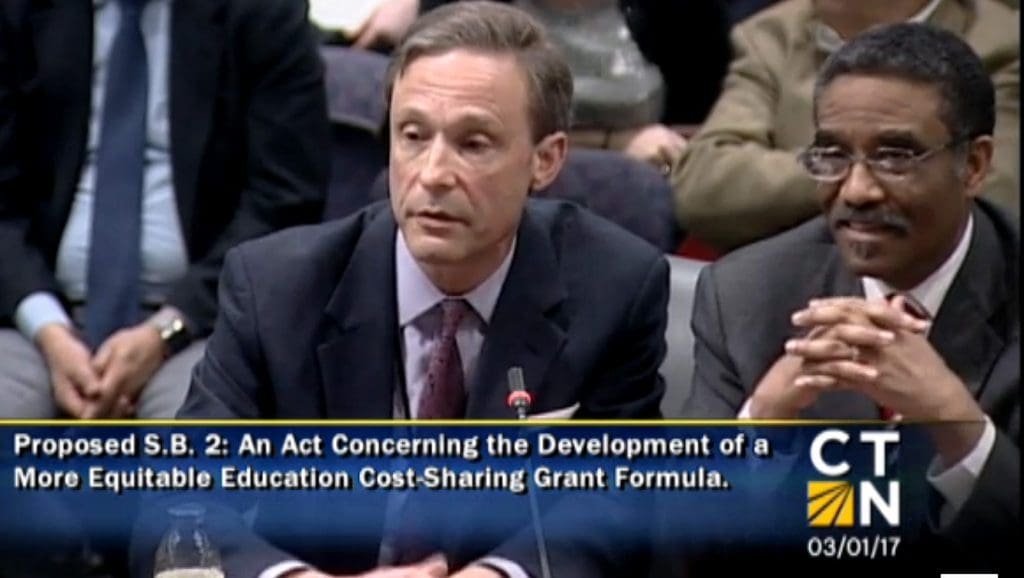 “Norwalk had a very strong day at the Education Committee with Norwalk support for the CCJEF (Connecticut Coalition for Justice in Educational Funding),” said Knopp, who was there as part of a CCJEF push for a study of actual costs of education.

State Senate Majority Leader Bob Duff (D-25), State Rep. Fred Wilms (R-142), State Rep. Bruce Morris (D-140) and Mayor Harry Rilling were all in Hartford to kick off what is hoped to be a new educational funding formula for Connecticut, although Education Committee Chairman Andy Fleischmann pushed back at concepts advocated by Norwalk.

Duff has introduced SB-2, an act “To develop a more equitable education cost sharing grant formula,” in the wake of the decision issued by Connecticut Superior Court Judge Thomas Moukawsher in the CCJEF lawsuit, calling the state’s ESC formula “irrational” and mandating proposals to fix it.

The state appealed that decision, fueling Fleischmann’s insistence Wednesday that there is no mandate other than a 1977 Connecticut Supreme Court decision that has inspired a reliance on the grand list for educational funding. 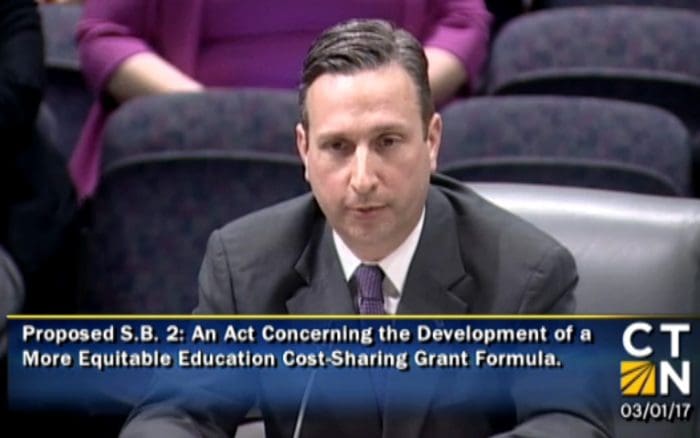 “The ruling present us with an opportunity,” Duff said to the Committee. “This opportunity cannot and should not be wasted… We must return to a formula. No longer can we manipulate it when we don’t like the outcome. For example, when a district’s enrollment number drops then the formula should be taken into account.”

“The question is how bold do we want to be? I say, let’s be bold,” Duff said. “Senate Bill 2 is purposely vague because it is a call to action to bring a diverse set of interested parties around the table. This is a Committee full of smart, careful and caring people, and I am confident that we can come together in the spirit of what’s right and what is best for all of our kids.”

Fleischmann, a Democratic West Hartford state representative who had a key role in killing the last round of attempted ECS reform, asked Duff to explain, “how, if we are following the law of the land,” would he consider it inappropriate that communities who have less get more in state funding for education.

“I think we would all agree that the formula has not been adhered to over the last bunch of years,” Duff replied. “There’s been exceptions and other rules written into it that has provided money to some communities and not to others. I think if you heard my testimony, you would hear the commitment I have and certainly to poorer communities, but I would certainly submit that in Norwalk and Stamford, the kids there need just as much as the kids in other places. The responsibility of the state is to be able to help provide education to those students as well.”

“Nobody wants to abandon any of those children but I don’t think it would be fair to say that the children of Norwalk and Stamford don’t deserve some help as well,” Duff said.

When Wilms was called to speak, he brought Morris with him.

The pair has co-sponsored H.B. 6793, which suggests using the state’s District Reference Groups (DRGs), a measure of the stress a community is under, as the foundation of a new ECS formula, Wilms explained to the Committee, calling it a simple proposal.

“The reality is most of our poorer districts would then get the larger funding,” Morris said, explaining that the towns who are least stressed, according to the DRG ratings, would get mandate relief as their benefit in the new system.

“The town’s wealth should be based more on median income because in my town I have people that have had their homes forever, they are house-rich, they are cash poor. There is no way they are going to add more money to our budget. So, we’ve got kids who look to us like those in New Haven, Hartford or other poorer parts of the state who now are not being properly educated, who are not being given the same kind of resources. So, this would make a bigger difference for us,” Morris said.

The grand list could be 60 percent of a formula and the DRG could be the rest of it, Morris said.

Income wealth shows how much money goes to the state, Fleischmann said.

“It is just inarguable that Greenwich, Stamford and Norwalk, with a small change in their mill rate, can raise a lot more funds than those communities that are further down the list,” he said.

Wilms fielded that, first acknowledging that the Supreme Court decision needs to be respected, but saying, “Personally, I think it is unfortunate that the Supreme Court not only mandated that the legislature take action but actually suggested a way to do it. But it is what it is. Respectfully, I do not agree with the statement that property values determine a town’s ability to pay taxes.”

Wilms mentioned that he was chairman of the Norwalk Board of Estimate and Taxation for eight years.

“To the best of my knowledge no one ever went into Norwalk City Hall to the tax collector’s office and paid their property tax with a plunk of land that they own. It has to come from cash flow and cash flow is separate from the inherent value of the property in the town,” Wilms said.

Using the DRG as the lesser part of an ECS formula would still be in compliance with the Supreme Court decision, he said.

“It wasn’t like the Court was saying that grand list had to be 100 percent the determining factor,” Morris said.

There are people in Norwalk who are living in homes they have inherited, who have little income and not much ability to pay property taxes, he said. Bridgeport has one of the highest mill rates around, but, “The reason we don’t do that is because we know the people there, the median income is so low they don’t have the ability to pay if you add onto the mill rate,” Morris said.

“If anybody were to come to my part of South Norwalk, it is as poor, if not poorer, than some of the other larger urban cities in this state,” Morris said, going on to repeat the idea that smaller towns would welcome mandate relief.

“You’ll be happy to know that mandate relief is something we are already working on in a bipartisan manner on this committee and, knock on wood, I think we will move forward,” Fleischmann said.

He lauded Morris and said, “I agree with much of what you said. There are people in my town and in every town who have difficulty paying their property taxes. Nonetheless, the equalized net grand list was the focus of the Horton v. Meskill decision. We will continue the dialogue.”

There were other competing ideas presented in the 12-hour long hearing, which touched on other topics than education funding reform.

Waxenberg, in a written statement to the Committee, said:

“Our proposal creates a fair and equitable funding formula for the next two years and calls for establishing a commission to examine how the state funds public education in Connecticut. It also creates CARES- a new fund to reform our education finance system. CARES, the Connecticut Achievement and Resource Equity in Schools fund for public education would ensure that all students receive adequate and equitable education opportunities.

“If nothing else, what the Governor’s proposed budget clearly shows is that the present system for funding public education is irretrievably broken and we need to take time to truly examine how we will achieve equity and adequacy. We also need to determine the true costs of educating all students of varying needs across Connecticut. Once these factors are determined, then we can create a funding system that can deliver equity and adequacy.”

The “true costs” of educating students is the current focus of CCJEF, which is advocating for a study that would cost the state $300,000 and take a few months, Knopp said Thursday.

“The education formula is irrational and unlawful because it is not based on any evidence in terms of how much funding is needed to meet the needs of different types of children in the state. The resulting formula therefore is based on either political compromise or just guesses about what works,” Knopp said.

As an example, many years ago the state provided more funding for English Language Learners but that’s been discontinued, he said.

“The end result is it simply disadvantages any city that has children who don’t speak English at home,” Knopp said.

“That is the kind of information that a cost study will be looking at,” Knopp said. “Sometimes I think the term study is misleading… it’s not really the kind of study the legislature often adopts just to kick the can down the road. But rather, it recognizes that what we’re dealing with is a formula with different elements.”

Former Mayor Knopp is correct: We need a formula that is based on the actual costs of educating students. To do otherwise puts cities like Norwalk — which is, relatively speaking, “property rich and income poor” — in an impossible bind every budget season.

Representative Morris and I were a great team in front of the Education Committee, working together for more ECS funds for Norwalk.

Yes! Excellent ideas, legislative efforts and testimony from Norwalk officials addressing reform of the state education cost sharing funding formula. Wow! What a great bipartisan team Representatives Fred Wilms and Bruce Morris made. This was wonderful testimony to witness. Together they made a very compelling cohesive argument (proposed H.B. 6793). Education Committee, Representative Lavielle thank you for your thoughtful questions. Chairman of the Board of Education, Mike Lyons thanks for your excellent testimony on Senator Duff’s S. B. No. 2 and making the connection to H.B. 6793. Love how you see the big picture and put the pieces together. Appreciate the bipartisan teamwork, thoughtful testimonies and efforts by all.
A proud day for Norwalk!