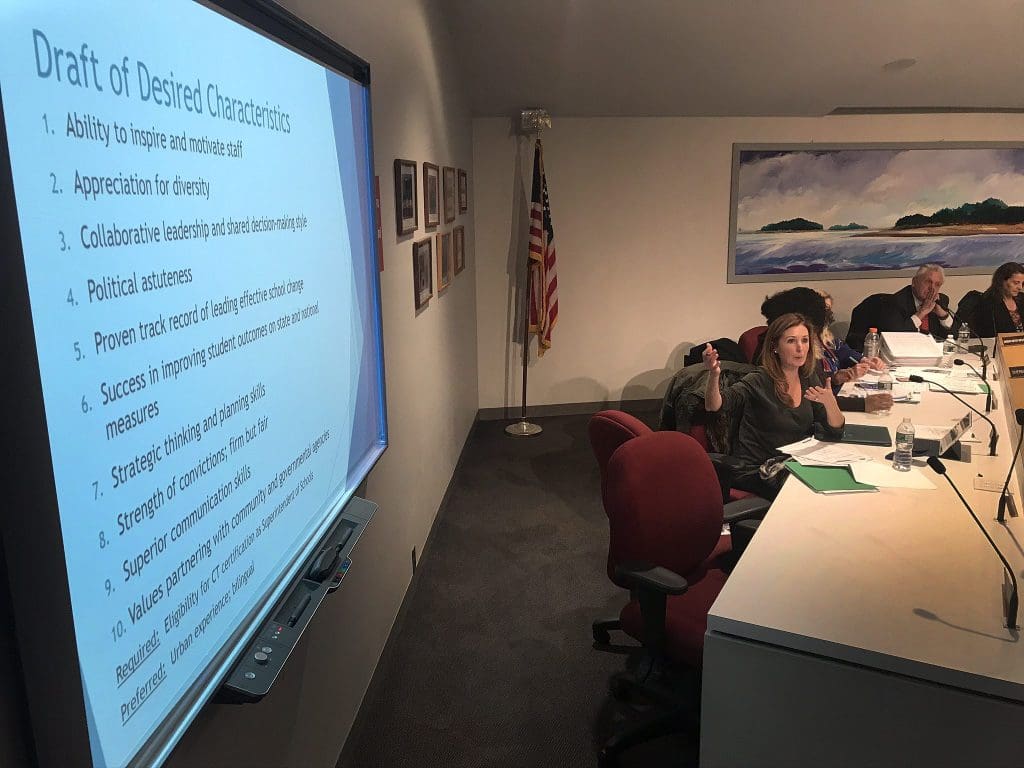 Norwalk Board of Education member Erica DePalma, center, talks to consultant Judy Ferguson (not shown) Tuesday in City Hall, as a list of desired characteristics for the next superintendent of schools is projected onto the screen at left.

NORWALK, Conn. – A consensus emerged in a recent online survey: Norwalk’s next Superintendent of Schools needs to foster a positive, professional climate of mutual trust and respect among school staff.

Second on the list of priorities was sensitivity to the needs of a diverse student population. Feedback from in-person focus groups mirrored these sentiments, Judy Ferguson of HYA (Hazard, Young, Attea) Associates said Tuesday to the Board of Education.

HYA was hired to develop a profile for the next superintendent and then recruit candidates, Ferguson explained. The community outreach was the first phase of the process.

Nearly 1,000 people responded to the online survey, including a highly unusual number of students.

Ferguson congratulated the Board for a good response compared to other school districts and called polling 603 students a “great idea” that no one has ever done before but warned that the student body has skewed the results.  But parents were the next largest group at 19.5 percent of respondents and faculty came in third at 11.9 percent.

Plus, “We always caution people that (a survey is) not scientific. People volunteer to respond. They aren’t necessarily representative of the whole community,” she said.

For in-person opinion gathering, HYA come to the district 12 times between Sept. 19 and Nov. 11, meeting with union leaders, School Governance Councils, Parent Teacher Organizations, Special Education parents, community funders, partners, school administrators and Central Office staff, she said. There were four open forums that anyone could attend, half in English and half in Spanish.

The forum turnout was also unusual, at 300 “the largest I’ve ever seen,” she said.

So first was to gather thoughts on the state of the district. The survey showed this list of strengths:

While the in-person results listed:

The kids say they love the diversity because, “We’re going to be prepared throughout the world because we live in the world,” according to Ferguson.  But, “It’s a challenge because there are needs that come with that.”

For the online survey, respondents were given a list of 12 statements and told to pick four as their top priorities in a new superintendent. “Fostering a positive, professional climate of mutual trust and respect was chosen by 42 percent of the respondents, by five of the six groups.

Only the administrators didn’t choose the “climate” statement.

Second on the list was “understand and be sensitive to the needs of a diverse student population,” with 38 percent of the respondents choosing it, and four of the six groups. Tied in terms of percentage was “provide a clear, compelling vision for the future,” but only two groups chose it, including the students.

The in-person commentary developed a draft of desired characteristics, which include:

Ferguson invited the Board to criticize freely, telling them she had no pride of authorship in the voluminous materials, and “I will not be insulted if you tell me to start over.”

Board member Erica DePalma noted that there wasn’t anything specific to Special Education. Ferguson said it’s in the complete report but agreed it should be listed as a challenge.

The next superintendent needs to balance the diversity in high needs subgroup because groups could potentially be pitted against each other when it comes to funding, DePalma said.

Ferguson offered to change the language, as might be suggested.

“I think that leadership style and decision making are separate from morale,” Board member Sherelle Harris said.

“If you look at some of the other bullet points on this, there’s a lot of issues that all deal with morale and team building and getting buy in for a mission, those kinds of things,” Mayor Harry Rilling said. “So, there’s a lot of that in here. It is critically important, mainly from the faculty standpoint where perhaps they want to make sure that they’re going to be heard that they’re going to have input and so forth.”

During public comment, Norwalk Branch NAACP President Brenda Penn-Williams charged that the NAACP had not been invited to speak with HYA.

“I am tired of Norwalk Public Schools excluding us. We’re here to stay, we are not going anywhere. So, I think that we need to have a voice in the new superintendent,” she said.

Diane Lauricella told the Board that “the superintendent’s role should include having a timeout.” She spoke of the “disjointedness and anger” in recent months, due to tensions between the NAACP and former BoE Chairman Mike Barbis, and, “I’m sure a lot of discussion may have happened behind the scenes with Dr. (Steven) Adamowski and others, but it did not appear – I know the superintendent works for the Board, but a superintendent is a professional who’s been in other districts and also has probably witnessed and participated in discord. It seemed like this discord just went on way too long, and a lot of, almost rotten cancer from within, for far too long.”

She also wished the next superintendent would work on environmental sustainability issues.

In beginning the discussion, Ferguson cautioned the Board that its superintendent search should be confidential. The finalists “will definitely be known” but the pool of candidates should be secret, to enrich the possibilities, as some highly successful people would hesitate to apply if their current school district were to know about it.

If that happens, “you become a lame duck superintendent,” she said. “And that’s, that’s not fair to that candidate, and they aren’t going to apply if they think that will happen. So that’s why it’s important to cast the net widely and welcome people in, but respect their privacy.”

~excuse me while I toot the NoN horn~

If there’s anyone in the community who claims not to know what’s happening with the superintendent search, point them to this article. Other than attending the BOE meeting in person, where else can you get this kind of coverage?

If you agreed and want us to continue through 2020, please donate to NewsMatch, now. https://www.newsmatch.org/organizations/nancy-on-norwalk

This is not that complicated. Whoever hired the last Superintendent did a great job. Just hire them to hire someone else. Special interest groups have their own agendas. They could care less about anything outside of their own sphere. Relative to online survey – I would bet 95% of taxpayers had no idea there was one. I know I had no idea. Hence, I consider that survery a travesty. I’m sure 95% of taxpayers would agree with me. I’m not sure if student respect and accountability are top priorities, but they should be. Show me a teenager who understands respect and accountability, and I’ll show you a happy teenager. It’s really not that complicated. Maybe government elites don’t want truly happy kids?

I was at the last meeting. I haven’t followed the process for too long but I don’t understand why the town has to hire consultants to do this. They admitted the survey wasn’t scientific, their bullet list was mostly common sense items and the presentation wasn’t impressive at all. I think the BoE is more than qualified to come up with what we need in the next superintendent, hiring consultants seems unnecessary. I think promoting/searching from within the town/system is always a great idea and good motivation for people who have been serving the town for years.