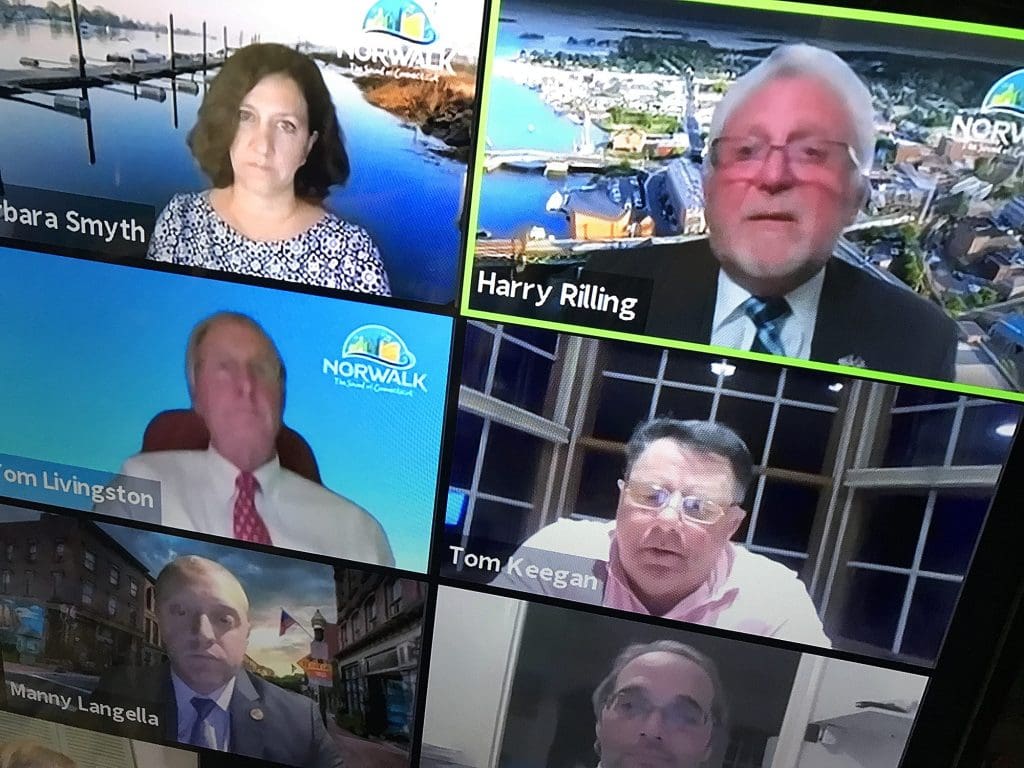 NORWALK, Conn. — Norwalk is set to offer 91 non-uniformed employees an early retirement opportunity, in an effort to cut expenses given COVID-19.

“We’re looking out for taxpayers, to try to identify cost savings that will help our taxpayers. It’s a much better plan than just initially jumping to layoffs and furloughs at this time, because that would negatively impact vital city services and we really want to try to avoid doing that,” Common Council President Barbara Smyth (D-At Large) said at Tuesday’s Council meeting.

The Council went on to vote 13-0-1 in favor of the Early Retirement Incentive program, with Darlene Young (D-District B) recusing herself and Ernie Dumas (D-District B) absent.

“This is an opportunity that we have right now to streamline the city services to try to downsize and save money to avoid those layoffs that Miss Smyth just mentioned, or furloughs,” Mayor Harry Rilling said.

Employees who are more than 55 years old and have at least 10 years of service to Norwalk are eligible to “gain three years of additional service credit, and, if they are younger than 62 years of age, any early retirement pension penalty will be waived,” a press release from Norwalk Communications Manager Josh Morgan explained. Norwalk Police and Fire Department employees are not eligible.

“Based upon our experience with doing a program like this 10 or 11 years ago, we project about 30 employees will probably take this program,” Director of Personnel and Labor Relations Ray Burney said.

Employees have three weeks to opt in and then will leave the workforce in early October, he said.

Rilling noted in the press release that, “We won’t fully realize the economic impact (of the coronavirus) to the City until October and January when tax collections are completed. Thankfully, we have safeguards in place with a healthy fund balance and have planned contingencies this year and next fiscal year to weather this storm.”

“The city has continued to be financially sound at this time,” Smyth said during the meeting. “But we don’t know what the future holds. And I would like to commend Mayor Rilling and his staff for being proactive before we really do feel those effects.”

Plus, no one knows what’s coming in the pandemic, Rilling said.

“We could possibly see another surge in coronavirus cases,” he said. “If you listen to the epidemiologists and you listen to the medical professionals who study these trends, they see these things happening already. We see what happened in Danbury…. We’re fortunate in the city of Norwalk. Our numbers of cases based on our population, we’re the lowest of all the major cities. We’re fortunate that we have that we are fiscally sound.”

While this process sounds necessary, were some of the hidden costs accounted for, such as the loss of crucial “Institutional Memory” that may be lost…Taxpayers in essence have invested millions of dollars over the years in staff pay and benefits, training and skill-building…

While it can be said that the saying “out with the old, in with the new” has a benefit of new skills and ideas coming in, did the City consider a hybrid model of select early retirement combined with select furlough/layoff of newer employees ?

At the very least, does Norwalk gives Senior staff retiring early or leaving a written Exit interview so some of that institutional knowledge is known/preserved? What do we “preserve” for future officials to review?

“Jumping to layoffs and furloughs”?

It takes you 6 months to jump?

So the tax collections are not coming in as expected. Care to shine a light? Or do we just get to wait and see because we can’t run a simple Munis report that is already in the system. Three mouse clicks for transparency.

I’ve been preparing the same reports for the 20+ years I’ve been here. Nothing has changed. Nothing is “buried,” and nothing is hidden. I provide those reports to our CFO and others within our department; the Administration; the Common Council; and the Board of Estimate and Taxation. They are also all available on line (details below).

If you go to their most recent meeting (August 2020) and scroll down the meeting agenda, pages 12 – 15 are my monthly reports for that month.

My reports are at pages 22- 25 of that agenda. All the Common Council agendas, and reports, can be found here:

Also, the Norwalk website Dashboard includes summary information on tax collections in its finance section. I update that every month, sometimes multiple times a month. You can view that here:

We had collected in excess of $160 million in tax collections so far through the second week of August, and were at about 45.7% of our expected collection. That information appears in the link above, so you will be able to continue to check it as we go forward through the fiscal year.

The Common Council and Mayor agreed that we would allow Norwalk taxpayers until October 1 – basically an additional 60 days – to pay taxes without interest due to COVID 19. So it stands to reason that yes, collections through August are down, because we gave folks more time to pay. Nonetheless, many folks did pay, and did not take advantage of the extended grace period.

I don’t often comment on things here, but when somebody says I am failing to disclose, or hiding something, I can’t let that go. I’m going to re-post this comment on another recent story that has a comment alleging pretty much the same thing, so forgive the redundancy.

One more thing: three of the seven employees in the tax collector’s office (including me) qualify for the retirement incentive.

Thank you Lisa for the information. Some will ignore it and keep peddling misinformation and whining.

The decision to not furlough may end up being the worst decision made in the recent history of Norwalk governance. Not all, but many junior level employees could have seen greater monetary compensation on the Cares act unemployment provisions and $ millions could have been saved. On top of that we are paying for the same services which have been downgraded, including the crap filled portolets at the beach in the middle of a health care crisis, since no one can possibly be expected to keep the bathrooms open past 6. People can call us whiners all they want, it doesn’t change the facts.

For clarification, just wanted to mention how so many of our Senior staff have a world of knowledge stored in their heads and how we need to understand their wisdom and ideas before they retire….The term “hidden costs” is a figurative, not literal, phrase.

For the record, Lisa Biagiarelli’s Tax Collection Department is one of the most efficient departments we have and Lisa and her staff are very dedicated!