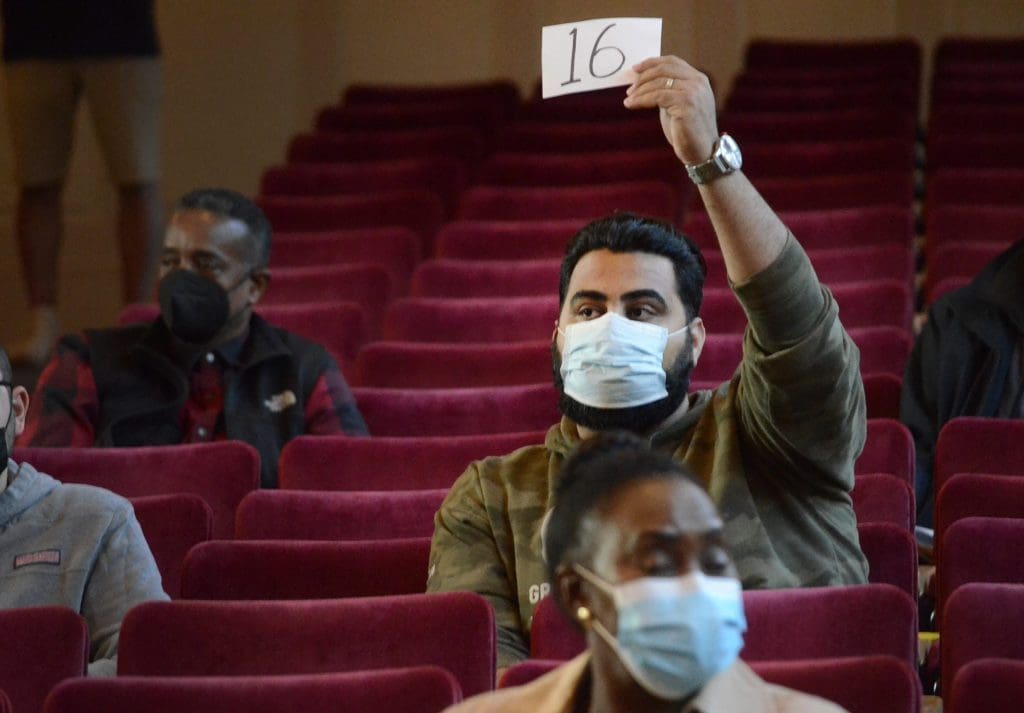 NORWALK — An additional $603,135 is coming to the City’s coffers via the latest tax sale, if all the bids are “consummated,” according to Tax Collector Lisa Biagiarelli.

Eleven of the 12 properties that made their way to the auction block Monday and were sold. The taxes on three properties were paid the morning of the sale and they were therefore removed, and another property fell off the list due to a bankruptcy filing Monday afternoon, Biagiarelli said. 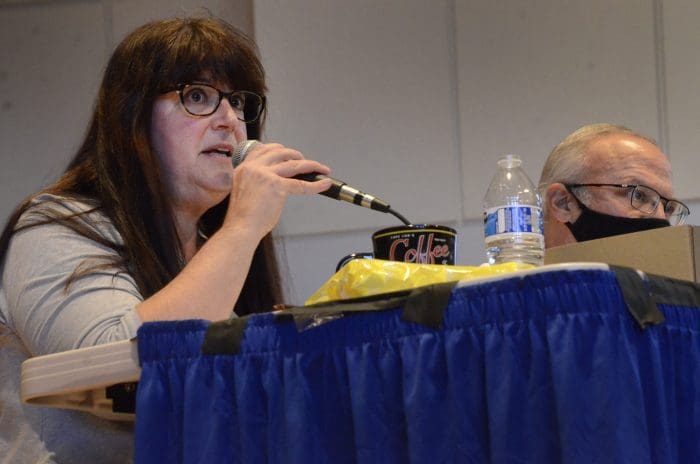 Work on the sale began in 2019 with 248 properties on the list. Bidders put down $5,000 deposits Monday to qualify for participation; the winners have until 3 p.m. today to pay the balance due or their deposits will be forfeited.

There were only four bids waiting to be “consummated” Thursday evening, she said. The sales will be finalized Friday “once we check for wire transfers and see who else comes in.  I do not expect there to be any who do not perfect their bids.”

Should all the sales go through, she expects more than $8.5 million will have been collected. 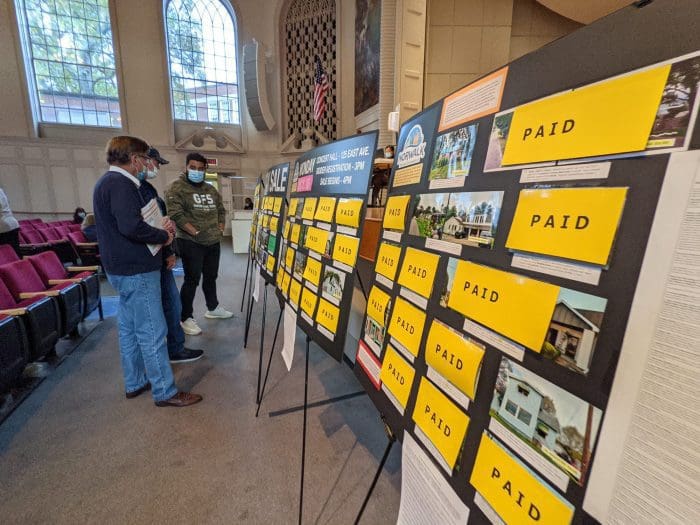 Taking a shot at the tax sale is a bit of a crap shoot, as bidders cannot enter the properties to inspect them. A set of signs detailing the available properties sat in front of the Concert Hall stage Monday, and before the sale began a group of men stood in front of them discussing potential pitfalls to purchases, with one commenting, “You don’t know if there’s oil in the ground there.”

Up for bid first was a piece of land on Sheffield Road, a leftover from Norwalk’s last tax sale in 2018. Although two bidders had registered for that auction, no one raised their bidder numbers when it began and the property remains unsold.

Old Saybrook residents John and David Ayers owe $24,525 in taxes on the .23-acre parcel, appraised at $95,550. Biagiarelli said the city will take ownership as it’s been through two sales.

The second auction was more entertaining, with the spirited competition you might expect given that 17 bidders signed up for the auction – except that only three attempted to buy it.

First up was bidder number 10, registered as Mathew Field, raising his number to assent to paying the $102,406 taxes due on 92-100 Main St., a $1.1 million commercial property. A game of one-upsmanship ensued, with the bidder registered as Arek Rutkowski competing only with Field as the price went up in $10,000 increments. 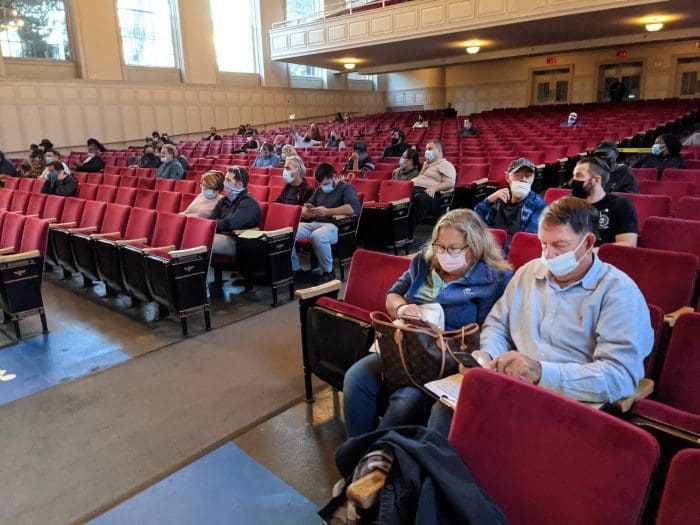 The gathering, Monday in Concert Hall.

It looked like the war would stop at $470,000 but a new man jumped in; the bidder registered as Pardeep Singh Gill took only one shot at that property, then Field and Rutkowski were at it again.

None of the winners own the properties yet, as the delinquent taxpayers have until April 18 to pay their taxes and the interest due to the winning bidders. If that doesn’t happen, the properties will transfer ownership on April 19. The city will collect the tax monies due and the Courts will decide who gets the remaining amount, the “overbid;” it might go to the delinquent taxpayers but it won’t go to the city under any circumstance.

Biagiarelli said about 45 people register to bid Monday. The results were: 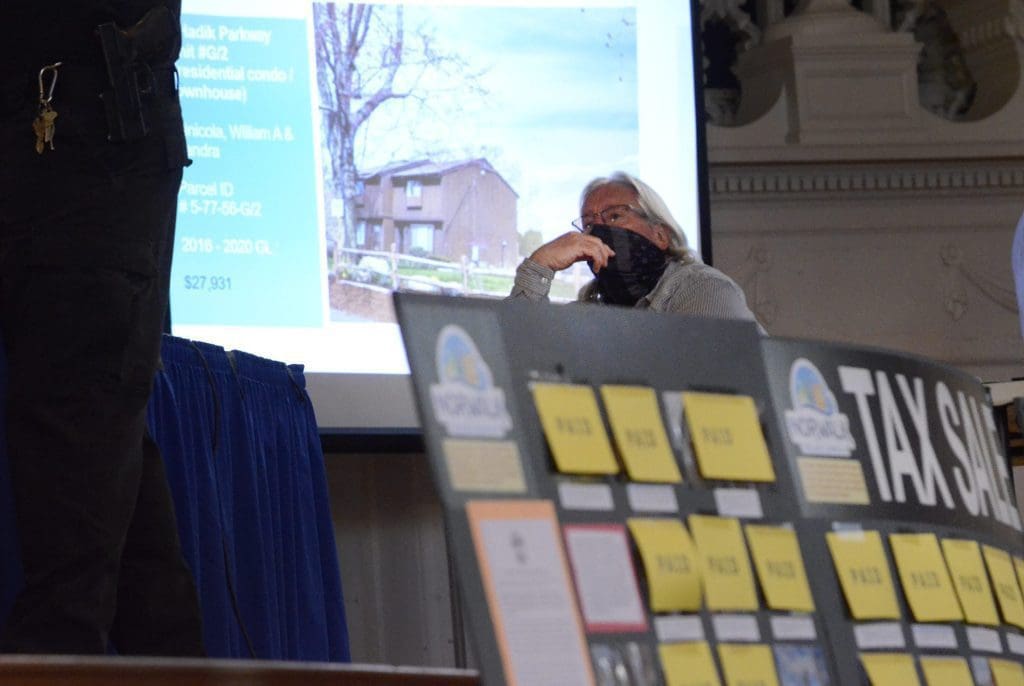 Good luck to the Stamford realtor who bought Elton Court.
The whole sale creeps me out.
While some,if not all are just tax deadbeats, the whole thing reminds me of Medieval Times. Perhaps taxes are a bit high? And perhaps we should go after deadbeats before a sale is required?
The State used to put up a list of the top 100 deadbeats, corporate and public. Malloy got rid of the lists (you can still go to Hartford to see them?) because it made the DRS look so bad. A regular who’s-who of deadbeats.
And I always remember when Stamford threatened the old lady on Long Ridge with a tax sale. She killed her daughter and then herself in the house over something like $50K. I still shiver when I pass by the house!

Can’t not post the story because while the City of Stamford would like to forget…I can’t.
So sad.
So unnecessary.
Stamford and the other got their money, but at what cost?
https://www.nhregister.com/news/article/Stamford-mother-daughter-fell-into-dire-11445442.php

Up early reading… and this though popped up.So friends & neighbors don’t help. Is that what I am learning from the mention of that horrible matter in Stamford noted by the comments here? They spoke to the media though. My landlord once told me a house on my street , the family had lost a child to cancer& how their yard looked horrible as the family went broke trying to save their child… my response was “… so you couldn’t bother to cut their grass… knowing what they dealt with?” He got quiet. Ppl reveal so much of themselves when talking about others. No we can’t go paying ppls bills, but yes we can give our time to mind a child or elderly person, do a person can work, assist in by cutting their grass,etc… Si I think anyway.