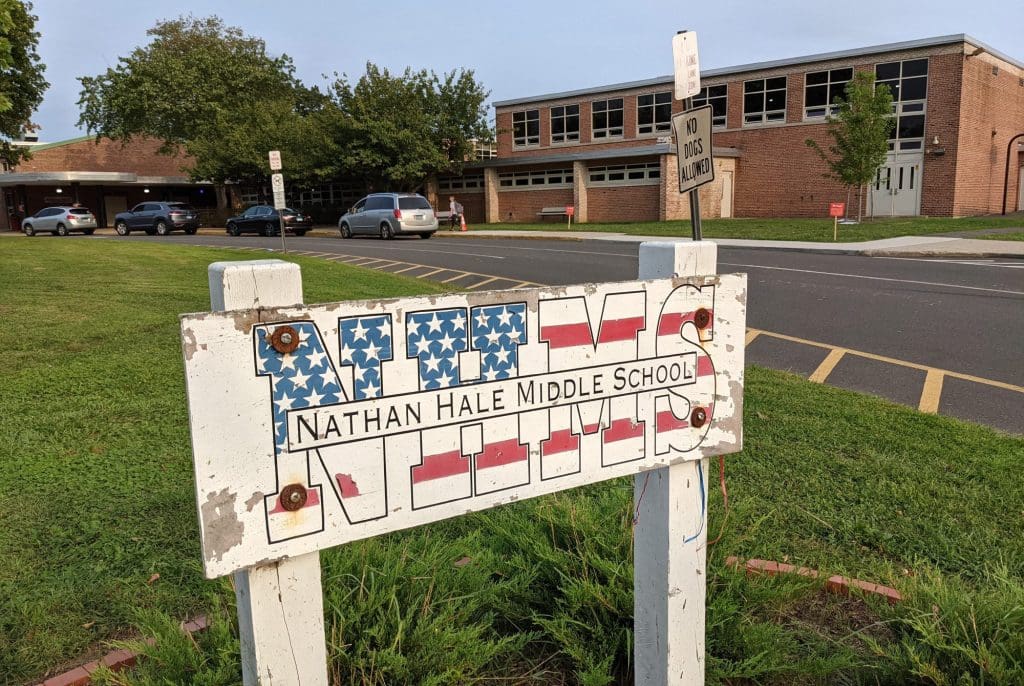 NancyOnNorwalk first became aware of the situation via an anonymous email.

“Racism has run rampant at Nathan Hale Middle School in Norwalk,” the writer said. “First, a … teacher said the N word over the walkie talkie system about a month ago. Several students, parents, and teachers heard her say this reprehensible word multiple times. The … teacher was never sent home or placed on any sort of leave. I was standing outside with my daughter when I heard the word. As a parent, we have had no communication of an apology from the … teacher. Again, the district never took any action to remove this teacher.”

The second incident involved a different teacher, who “said the N word to a group of students in her homeroom and proceeded to repeat the word several times,” the writer said. “When students confronted her and asked her not to use the word, she dug deeper and said, ‘no one owns the word’, her ‘family never had slaves so she use the word freely’, and she has a ‘freedom to say/use the word.’”

Asked about this Thursday, Penn-Williams released a statement, agreeing that in Tuesday’s incident, “students implored the teacher to refrain from using the word and actually told other teachers of the incident in an effort to cause such use to be stopped.”

“The teacher said the N-word in varying ways repeatedly and in a negative way, even though it is understood that a teacher cannot use this language in a classroom filled with students and expect it to have anything other than a negative connotation, no matter the intent or the context.

“Again, Tuesday is not the only situation where such language has occurred. We were made aware that Central Office had been informed of all of the particulars concerning this most recent situation and we have asked what they intend to do about it. The only response that we’ve been provided with at this juncture is ‘The issue is being investigated and addressed’, which is all that we’ve gotten from them thus far. We are extremely concerned with this response as the previous incident was addressed in a manner that equates to pretty much nothing. The teacher remains in the classroom with the same students having to tolerate her even after they have witnessed her use of the N-word. Surely, there has to be a recognition that some students might well have been traumatized with the language used and might feel some resentment each and every time that they have to enter this teacher’s classroom.

“Needless to say, we were disappointed with actions (or non-action) that was taken by the School District after they supposedly investigated and acted in that previous incident.

“We are outraged that these types of incidents are now continuing and we are particularly incensed that teachers are allowed to engage in negative racist language without penalty or consequence. It seems that the Norwalk Public Schools District is quick to weigh-in on students and impose discipline on them even in sketchy or insignificant actions or activity, and particularly in the case of black and brown students but are so very reluctant to impose discipline on teachers when they have clearly engaged in inappropriate and unacceptable behavior.

“There is no room in our school District for these types of situations to continue to occur. In our opinion, and we would hope to the majority of Norwalkers, that there is absolutely no place in any of our schools where use of negative racial language in front of students is acceptable. No matter the context, the use of the ‘N’ word should never be used in our classrooms, especially in a repetitive situation as was the case on Tuesday. Students were actually imploring the teacher to refrain from her continual use of the word, and that is a shame.

“This situation cannot be ignored and it cannot in any way be condoned. We have been made aware of several instances of racially insensitive incidents in the Norwalk Public Schools System which have included both students and adults. We regret that Central Office has not meaningfully addressed them and believe, that because of their failure to do so, that future incidents will continue to occur.

“Our students, our parents and all of Norwalk deserve to be able to go about their day- to-day activities without being subject to hate language or hate crimes, and this is especially so in our school system. We are obligated to stand up against these types of actions every single time that they occur and make every possible effort to keep them from occurring in the future. We have heard directly from parents, students, teachers, administrators and other members of our community and are clear that there is an expectation that these sort of situations cannot be tolerated and cannot be allowed to continue without consequence.”

“Earlier this week, the Norwalk Public Schools became aware of concerning allegations made against an employee of Nathan Hale Middle School. That employee was immediately placed on administrative leave pending an investigation into the alleged misconduct.

“Although we consider personnel matters to be confidential, we take this opportunity to be clear that we have zero tolerance for racial insensitivity and take seriously our responsibility and commitment to maintaining an environment in which everyone feels welcome. While have been providing training on racial sensitivity to staff and students alike, recent events remind us that we must strengthen our efforts.

“We regret that our community has been disrupted by recent events. There is simply no excuse for the use of racially insensitive language at any time or by any person and we expect all members of the Norwalk school community to treat each other with respect and dignity.”

This is Absurd and there is No Excuse for it! If the word “Jew” was used or something offensive to Asians, it would have been seen as a “Hate Crime.”

Norwalk has a Minority Female as Superintendent and several BOE members are people of color. I ask you, how does this make you feel as you serve side by side with this Blatant Racism in your face?

While the use of the racist insensitive words should not be tolerated I would argue the real racism is failing those students of color academically. The statistics demonstrate a systematic failure to educate children of color in Norwalk. Why is that? I think there’s a lot of blame to go around. If you want to blame teachers, some may be at fault, but 99.5% do a great job. Is it the past and current administrations? Personally, I fault politicians who’ve built a system that just doesn’t work. Maybe if they were straight with the community the “true” racism issue in our schools would finally be addressed. Until that happens those outraged by teachers language have a point, but are missing the forest from the trees. I would appreciate seeing this outrage when statistics point to kids struggling because they are not challenged. Again the word is CHALLENGED NOT CODDLED. 100% In or 100% Out.

When I saw the headline I thought this might be a story about a teacher who was teaching English or history and not handling past norms in a sensitive way. Instead it just seems like a teacher spouting racist slurs in class for no remotely educational purpose… The first is a complex issue in which I think we have evolved in an appropriate manner to generally agreeing not to have (especially white) teachers use words that are now slurs in a school setting. The second is just incomprehensible…

Jew is not an offensive word. A person of the Jewish faith is a Jew.

I totally agree with Mr.O’Neill’s statement. Kids that are not challenged get bored. They also distract those that are there who want to learn and accept the challenge because they are looking forward to a college education, always bettering themselves and their future. Coddled children don’t accept the challenge. They end up falling by the wayside and getting into big trouble, often times with the law. Life can be a challenge and one needs to understand that before it’s too late.
Get with the program NOW!

It’s interesting to see comments from people who don’t know what is offensive anymore. Jew is not a pejorative term.

@ Susan Miller
Why are you making this about the children? You never even acknowledged the teachers bad behavior. Please enlighten me on how this teacher’s behavior encourages nurturing learning environment. Shame on you for victimnizing the victims. THE CHILDREN. Your comment is also bias because it insinuates that children of color are the ones disrupting the classroom and they are not. Shame on you. Get it together.

@CTV is correct. It’s sad that too many people latch on to the “it was just English class!” defense before they bother listening to what was actually said.

Coddled children or not, what does this pertain to article about racist comments. Racism is an important issue on it’s own terms and should not be pushed aside.