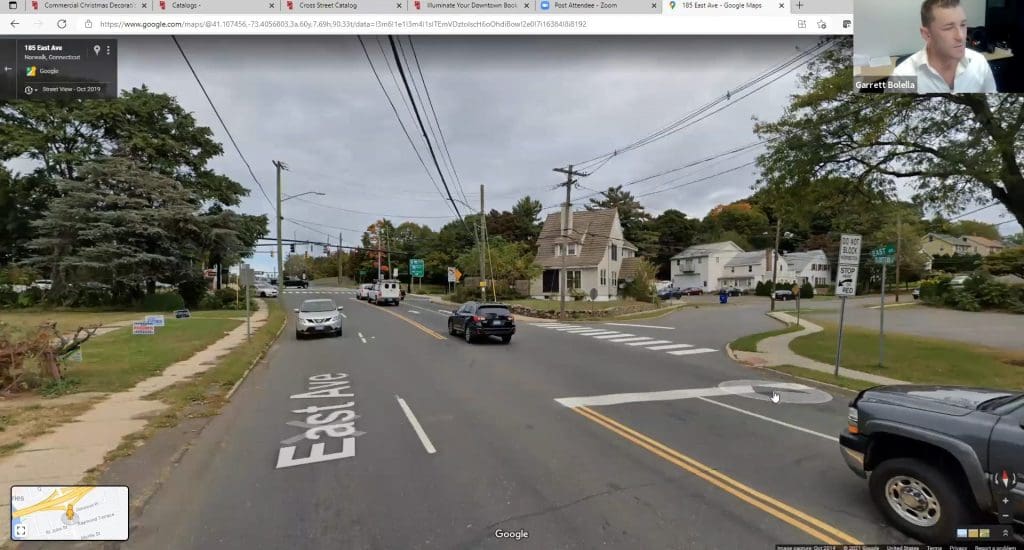 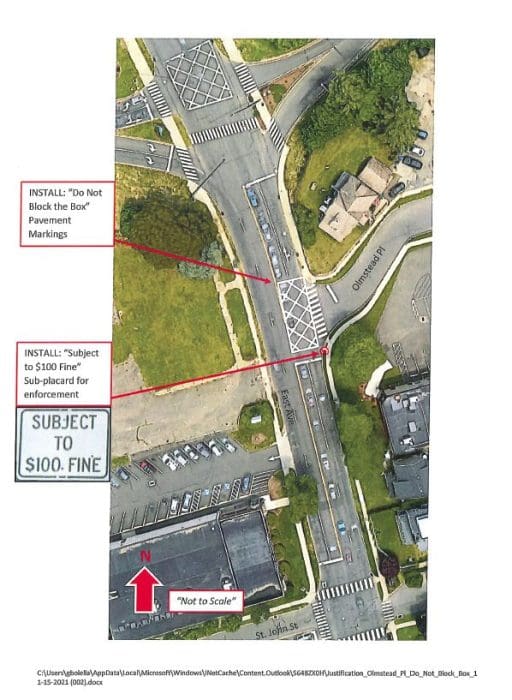 The proposal for new “Don’t Block the Box”markings on East Avenue.

NORWALK, Conn. — Norwalk’s new traffic mavens are looking to revisit an issue from five-six years ago: the challenges Olmstead Place and Knickerbocker Avenue residents face when they try to exit their neighborhood and get onto East Avenue, especially if they need to head toward the beach.

Assistant Director for Transportation Services Garrett Bolella, who’s held his post since mid-February, would like the City to paint “Don’t block the box” lines on the northbound side of East Avenue where it meets Olmstead Place, just south of the “Don’t block the box” grid at Interstate 95 exit 16. Bolella was hoping to do this before it got cold but the Traffic Authority tabled the idea Nov. 15 so it’s not likely to happen until Spring.

Residents of the two small side streets organized in 2015 to prevent the box grid and its accompanying signage, with about 15 of them attending a Mayor’s Night Out, under the leadership of Diane Cece.

Cece spoke to the Traffic Authority Nov. 15, asking that it be tabled.

“It’s ironic in a way because back in 2015, I can say, ‘it’s like deja vu all over again.’ This same topic came up and was sprung on all the residents by surprise at that time, in conjunction with the discussions on don’t block the box for state approval at the highway down on North Street,” Cece said. “…I’m not quite sure how it got on the agenda, except maybe some folks that are new to the neighborhood had been considering options there.”

Bolella said a resident had requested action, explaining that all of the issues Cece was citing had also been brought up by the resident but so were the challenges of exiting Olmstead with cars blocking the intersection.

Cece said box lines there would give residents a false sense of security in assuming oncoming motorists would stop, and, “In fact, they don’t really at the two (blocked boxes) that exist now and they certainly don’t heed the not-so-prominent ‘stop here on red’” sign on the southern corner of the intersection.

Any cars seeking to turn right from Olmstead would be in the box, she said. “No matter which way we’re looking to get on or off the street, it seems to create a dilemma.”

Police can’t really enforce the markings because there’s no where to pull motorists over, Cece said. And the State won’t allow traffic cameras so citations can’t be issued that way.

“I will agree that enforcement is difficult for the reasons that Miss Cece mentioned, it’s tough to find a spot just to be able to pull somebody over to get him out of traffic,” Norwalk Police Chief Thomas Kulhawik said. “… I could understand the concern about moving forward without further discussion.”

“Residents on all sides of this topic have been frustrated by it, those who live on Olmstead and still don’t feel safe getting on and off the street, those people who are frustrated when they do obey the don’t block the box, and then only to be cut off by another car who cuts in front of them,” Cece said. And there are “those who feel that the you know the existing don’t block the box impedes their opportunity to get through seemingly endless red light cycles trying to get to the highway, in conjunction with everything that we did in 2015.”

Still, “I think it’s worthy of revisiting because it could still be a viable solution,” she said. “But we would ask that you go ahead and coordinate a meeting with the Olmstead Knickerbocker residents.”

Bolella said TMP (the Transportation, Mobility and Parking department) recognizes that the 2015 changes aren’t working. TMP went out to the intersection to investigate and used drone footage to see some of the vehicle queuing from above.

“I think we’ve all been in a situation where we think there’s going to be sufficient space on the opposite side of the intersection to accommodate us without obstructing the passage of vehicles, for example, on Olmstead. However, it’s often just difficult for us to tell where the queue ends on the other side, and we may enter the intersection and block the intersection without the absence of additional markings,” Bolella said.

To make the recommended alterations, City Code will need to be updated, he said.

“We also recognize that the police department has limited resources to dispatch and maintain intersections like this, but we really believe that pavement markings will improve compliance and they’ve been proven to increase compliance of drivers yielding on the other side, the far side of an intersection to create gaps,” Bolella said.

Traffic management works best when “we have consistency in the street network,” Bolella said. “That includes all the signage and pavement markings.” Olmstead is treated differently, which may contribute to the failure of the 2015 effort.

What does TMP stand for? The article doesn’t spell it out anywhere that I could find. Thanks.

That is a difficult left to say the least. At first I thought just paint the box. As shared, I wouldn’t assume anyone heading north would stop even with the box painted. If I lived there, I’d resign myself to a right hand turn mainly/only

Note to Garrett B — You may want to spend some time working to make Connecticut Avenue a passable road, before wasting our tax dollars on a project inspired by one over anxious resident.

Now that I think about it Shouldn’t zoning come into play with this complaint: ALL of East Avenue will be a complete DISASTER once development plans comes thru in East Norwalk- I would recommend that this taxpayer review who they voted for and how that elected official is stepping into line behind the development that will turn East Norwalk into the Cove Area of Stamford.
The idea is to pay attention BEFORE voting, not after.

Ellie, TMP is Transportation, Mobility and Parking. It’s a department created in the reorganization of City Hall administrative positions. Transportation, mobility and parking were moved from Department of Public Works oversight over to Economic Development.

Thanks for the copy edit.

Five bucks says that whenever Olmstead was originally approved, the developers promised left and right that the new subdivision wasn’t going to cause traffic problems.

Of course, it’s so lovely that we’ve swung the absolute other direction into “building block-sized apartment buildings that can’t be easily repurposed if they fall flat”. We totally learned our lessons!

http://www.strongtowns.org, people. Housing policy doesn’t have to be conservative or progressive. It can just be… sane. And accomplish growth without upending everything or resulting in massive corrupt political machines.

How does the Exit 16 Bridge overpass reconstruction play into this as well?

How about going down the end of Olmstead to the cul-de-sac and punching a hole through the wooded area and coming up the backside of the Maplewood at Strawberry Hill creating a neat and orderly egress out the street alongside i95.
Boom, Bang, Bam problem solved!

Should be even more fun in traffic if the zoning pushes the suggested building on old Howard Johnson’s property. Attend ENNA meetings.

Having lived in the area for twenty-seven years, I can attest that the problem is not with the northbound traffic on East Avenue. Traffic there almost always yields the intersection. The issue is with the almost non-stop southbound traffic alternately coming down East Ave and off of Exit 16. But if there’s some extra paint lying around, what the heck.