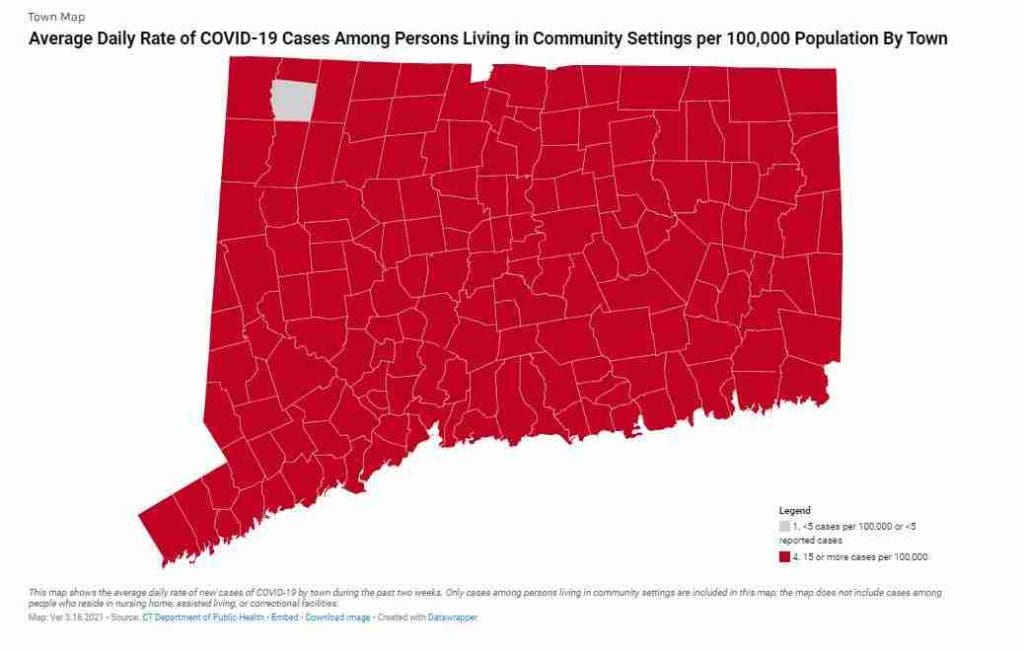 NORWALK, Conn. — The City is planning to distribute free rapid at-home COVID-19 tests to residents at 6 p.m. today, Tuesday Jan. 4, at Calf Pasture Beach. Supplies are limited and the drive-thru distribution event is first come, first serve; if the supply doesn’t run out, the event will end at 9 p.m. N95 and KN95 masks will be available.

City officials are also talking about opening another testing site, given the long lines to get into Veterans Park, Mayor Harry Rilling said. Dealing with the “huge surge” in demand has been challenging but he gave the Norwalk Police Department instructions to close the gate until two hours before the test event is set to open and shoo people off the road if they line up before that. “So far, that’s been relatively good.”

“The demand for testing is at unprecedented levels as the Omicron variant sweeps through our community. Please, only seek a test if you have known exposure to or symptoms of COVID-19. Testing should not be used as a general screening tool since the supply cannot meet the demand,” Rilling said in a news release. “Given the number of tests we’ve received from the state, there is unfortunately no way we can reach every household. I share in the frustration that 22 months into this pandemic we do not have adequate testing resources. I, along with our state delegation, continue to advocate for more resources for our community.”

Norwalk had planned to give residents at-home   tests Friday at the beach, but Gov. Ned Lamont announced Thursday that the promised order of 1.5 million COVID-19 home test kits that was supposed to be on its way to Connecticut was not coming.

The state had an “airtight agreement” with a vendor who sent officials pictures of the supplies, Lamont said. State officials repeatedly said they had a purchase order with a wholesaler, and that since the kits were never delivered, no state money was paid to anyone.

“Originally, Norwalk was set to receive more than 11,000 test kits – each of which contained two tests. Now, the city received 13,500 single test kits – almost half of what was originally allocated,” the City news release said. “Of the 13,500 tests, Norwalk will be distributing approximately 8,500 to the general public at the beach on January 4. The remaining tests are being distributed to Norwalk first responders, those in congregate living facilities and who are greater risk of exposure and are the most vulnerable.”

The beach will be closed all day Tuesday.

“Motorists seeking free at-home tests must enter from Beach Road,” the news release said. “Any motorist attempting to enter from Canfield Avenue will be turned around and directed to Beach Road. Residents should not attempt to enter the beach early, as the gates will be locked until 5 p.m. Please do not drive around the area as this will impact the safe arrival and dismissal of Marvin School. Norwalk Police Officers will be on site all day to ensure vehicles are not parking in neighborhoods and surrounding areas.”

N95 and KN95 masks will be handed out with a limit of four per household and two tests will be limited to two per car. Proof of residency is required, and that could be a utility bill, a beach pass or photo ID. 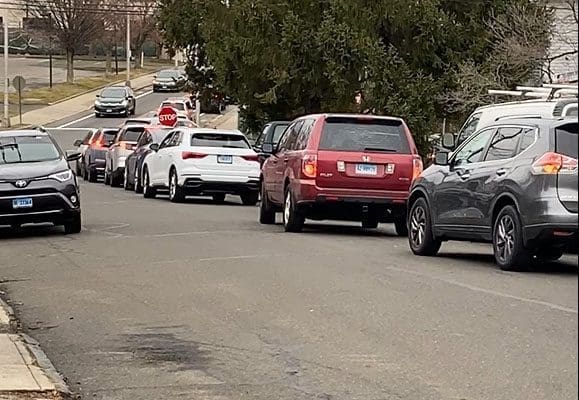 Cars lined up on Dec. 28 Quintard Avenue, waiting to get to the Veterans Park COVID-19 test site. (Rick Reardon)

The problem with the huge demand for tests at Veterans Park is that “we only have so many human resources that we can use,” Rilling said to the BET. The folks doing the testing only get 500 test per day and people were showing up at 8 a.m. for an event that began at 3 p.m.

That resulted in a line of cars going over the Stroffolino Bridge, down Water Street and onto Quintard Avenue, Rilling said. Now, police are lining people up in rows two hours in advance and then letting them in, one row at a time.

BET Chairman Ed Camacho asked if this would result in a shortfall in the police budget, given the unexpected nature of the work. Rilling said he hoped the City would be reimbursed for the expenditures.

“We want to make sure that we have the proper coverage, because quite frankly, some people can be very aggressive, very rude to the officers, and is just a very chaotic situation,” Rilling said. “I give the officers a lot of credit, not only for the ability to control the lines and make some sort of pattern out of it, but also to be very patient and very understanding of the people that are waiting for six, seven hours only get up to the front of the line and say there’s no testing.”

The City did not release COVID-19 updates over the holidays.

According to the State:

If the vaccine works, why are so many vaccinated people
either getting sick or so worried about getting sick that they continuously get tested?

Thanks to Joe Biden’s incompetent presidency, we have a COVID surge and a major national shortage of rapid tests because Biden ‘didn’t see it coming’. With more deaths in 2021 than all of 2020, you’d think it would have occurred to the Biden admin to plan for the unexpected.

I hope that is goes smoothly. Next door in Stamford the clown show was…well, typical. The new mayors professed Homeland Security experience was showing. It was a joke ,but she claimed it went smoothly in her presser with Ned and Dick at her side. THEN, the next day the distribution method changed but thank goodness she is still working with State and Federal agencies for more tests. The tests that Connecticut seemed to have paid…well north of $18.5M for after Ned’s Florida vacation hopefully will get distributed in Norwalk more smoothly.
Ms. Simmons claimed she was going to hit the ground running on day one. Perhaps baby steps would be more appropriate. Good luck to Norwalk!! Passing out something for “free” can lead to chaos.

Free tests and masks are just one component of what needs to be a broad flawlessly executed strategy to mitigate the spread. What I want to know is how are those front line workers and others that don’t have a car get access to the 6pm event in the freezing cold? Who is distributing the materials to those most affected by risk, immune compromised, elderly, those with disabilities and the black and brown community and young children that may not be able to drive up and sit in a long line in a heated private vehicle? There is so much, and so many deserving citizens that Lamont has left out. LAMONT step up and be held accountable, answer this?

Unfortunately the City of Norwalk failed miserably again while allowing many people out of town and out of state to head up to the beach and get covid tests. Due to volume residence ID’s couldn’t be checked. The lack of pre planning from City Hall just shows the lack of leadership in this City.

Want to know why people are getting COVID even though they are vaccinated? It come down to how effective the vaccine is. What we were told isn’t exactly how the average person would interpret the same information.

If you read the article posted in this site you know what I am talking about. During the covid vaccine testing process 2.5% of placebo group didn’t get Covid, 50% of the group with the vaccine didn’t get covid. So they did the following math – 1-(2.5/50) = 95% effectiveness. Based on this, wouldn’t you think the effectiveness was closer to 50%?

People were told the vaccine was 90%+ effective against the virus. Not 90%+ better than nothing! No wonder people don’t trust “the science”.

Another point. Where are the tests? President Biden criticized the Trump administration back in October of 2020 for not having an abundance of tests available to Americans. Here we are 12 months in to the Biden administration and we are in worse shape than October 2020. President Biden’s hollow promises are coming back to haunt us all.

Ask yourself, are you better off now than you were in October 2020?

We can vote by mail and are told it is secure. However, sending COVID tests via mail is not secure? You can’t have it both ways.

Is it a vaccine or an injectable therapeutic? I was triple vaxed and still got Covid. On a whim after some sniffles, I took an at home test.

Speaking of therapeutics, do we know if local doctors have prescribed regeneron, hydroxy, etc? I hear nothing on these matters. It’s all shot, shot, shots. I’ll remind readers that HIV was not solved with a vaccine.