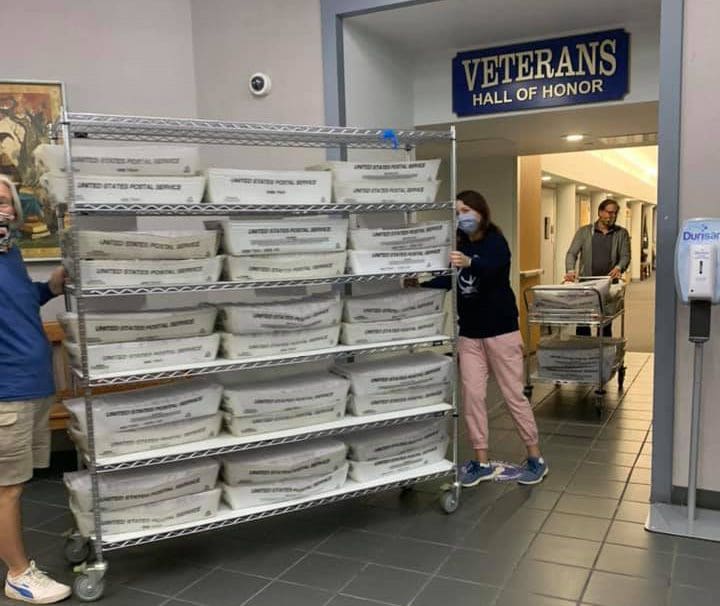 Absentee ballots make their way out of City Hall at about 9:45 a.m. Friday. (Jona Cruz)

“We did it,” he said. “Now, is there a couple glips or glops? Well, in every election… we get things that happen.”

About 1,000 ballots went out without an indication that they can be mailed back postage free, he said. And Norwalk resident Paul Cantor said the ballots don’t say that fear of COVID-19 is an acceptable reason not to go to the polls.

McQuaid said any ballot that is dropped in a mailbox will be delivered to the Town Clerk’s Office, whether or not it has a stamp on it. There are three drop boxes in Norwalk, and people are already using them – about 1,500 ballots have already been received by City Hall, where the box was emptied five or six times Monday, he said.

To get a ballot, you had to fill out one of the ballot applications that were mailed to every Norwalk voter. COVID-19 was listed as an acceptable reason on the application. 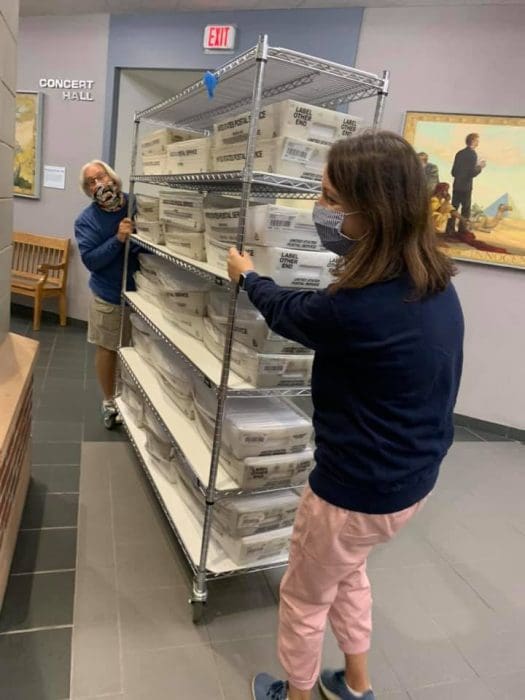 Absentee ballots make their way out of City Hall at about 9:30 a.m. Friday. (Jona Cruz)

“The problem is the ballot that I (and I assume others) received requires you to sign a statement that begins:

“‘I hereby state under the penalties of false statement in absentee balloting …. That I expect to be unable to appear at my polling place for one or more of the following reasons’ and FEAR OF CONTRACTING THE VIRUS IS NOT GIVEN AS ONE OF THOSE REASONS.

“So that may lead to many who fear showing up at their polling place not voting.”

As of Sept. 28, the Town Clerk’s Office had received 11,065 applications, according to the City’s website.

“These are humans doing this, we’re not using machines and everything,” he said Monday. “So, you know, you do have errors over the years. I’m not saying these are things that (don’t) happen here. You know, somebody may get a wrong ballot, an address may be different, somebody may get a ballot in one envelope, a spouse may get in different envelopes, they go to the same place.”

He said three ballots had the wrong address on them, as of Monday.

“Nothing that can’t be fixed.” McQuaid said. “We’re not saying we don’t have problems; I’m just saying that we are prepared in better shape, right today than we ever expected to be.”

A few names might be spelled wrong but, “Overall, I think we do a fantastic job.”

The 1,000 ballots without the postage paid marking were because “we were waiting for supplies from the state,” and the decision was made to make sure voters got their ballots, he said. “…But it’s already been cleared by the state and by the Postmaster here in the city, they can just send them into us and the postage is covered.”

There were ballots in the drop box with stamps on them, he said.

He believes that all Norwalk ballots will be delivered as of today, Tuesday, Oct. 6, he said. Again, you can take your ballot to a drop box, at: 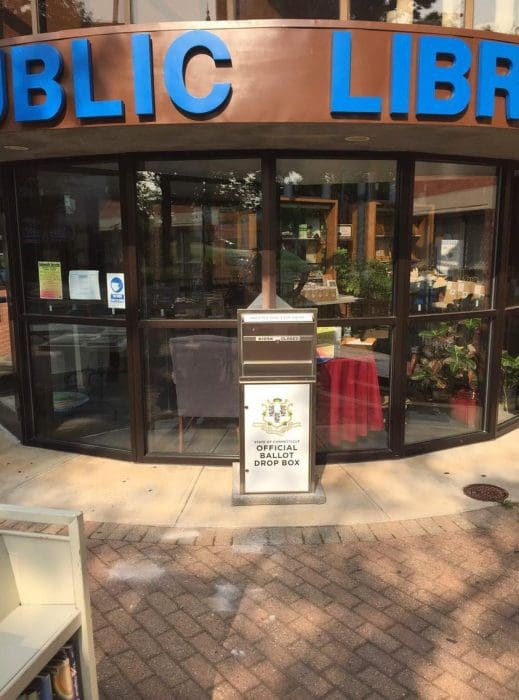 “Drop boxes are monitored by cameras and the contents inside are picked up at least once a day by the Town Clerk,” State Senate Majority Leader Bob Duff (D-25) said in a Facebook post.

“I know there will be a lot of armchair quarterbacks, that probably have a better way to build the mousetrap. But I don’t think there’s any problem that arises that we can’t handle,” McQuaid said. “…We’ve given ourselves enough time, of almost four weeks before the election, so if somebody did have a problem with their ballot, or there was an issue with something that we’ll be able to take care of it.”

Good job. But who is paying for this? The cameras. The lock boxes. The overtime. Are there really 10,000 additional voters over the usual 3000 who aren’t going outside or anywhere else 4 months after we flattened the curve? That’s 20% of the voting population. Looking at the return to normalcy in traffic, you wouldn’t know it that 20% of our city is still holed up in fear.

Bryan – I voted absentee this year. I think first time ever. And no, I’m not a shut in by any means, but with a president actively discouraging the use of masks and science I’m not real interested in getting in a potentially long line with the possibility of some maskless Trumper behind me breathing/ coughing/ sneezing on me.

Yes, the problem with the absentee ballot I and others received is that it indicates that in order for it to be counted the voter submitting it must sign a statement that reads: “I hereby state under the penalties of false statement …. That I expect to be unable to appear at my polling place for one or more of the following reasons” and FEAR OF CONTRACTING THE VIRUS IS NOT GIVEN AS ONE OF THOSE REASONS. So the Governor or someone with the authority to do so should issue a statement indicating it is o.k. to add “(6) no federally approved vaccine for prevention of COVID-19 is readily available to me” to the reasons for expecting to be unable to appear at the polls. That message should go out immediately to everyone who has yet to send in their ballots. That it was omitted from the ballot I and others received is a serious oversight.

Irrespective of our Town Clerk’s yeoman efforts, this new system is systemically designed by the SOTS to encourage vote fraud of the. traditional Bridgeport kind. Period. End of story.

Paul – My absentee ballot inner envelope includes “…(6) the sickness of Covid-19.” Does yours not?

If inner envelopes do not have any reference to Covid-19, that seems to be a huge oversight. If that language is included, but the drafting is not to your liking, I may suggest that the article be updated.

A comment and a question:
Comment: My absentee ballot inner envelope clearly says “I hereby state…that I expect to be unable to appear…for the following reasons…:(6) the sickness of Covid-19.”
Question: May I decide to disregard voting by absentee ballot, and just show up in person instead?

Norwalk has been one of the most top Cities in Connecticut to hold the highest level of integrity in our Elections. Other towns and cities have relied on Norwalks assistance. Stuart Wells works with the State on many issues to inmprove Connecticut’s systems.
The office of the Town a Clerk, lead by R. McQuaid has worked on the security and custody of your ballots for months.
The office of the Registrar of Voters has since February working to assure that in person voting is safe. Thank you Brian Smith and Ron Banks for your efforts,
If you are worried call either office and ask questions. They are happy to assist you.

I sent Nancy a photo of the inner envelope my wife received. It is identical to the envelope I received. Neither of them have (6) the sickness of Covid-19” as one of the justifications for not showing up at your polling place.

My hope is that she will publish it.

Apparently, two different inner envelopes have been sent out.

The press should seek a response from the Governor as to how this situation should be dealt with.

@Adam. Who knew Trump supporters only wait in line at the ballot box? They don’t go and wait anywhere else in line sharing the same air through a cloth mask that is 1000x more porous than the diameter of a microscopic virus.