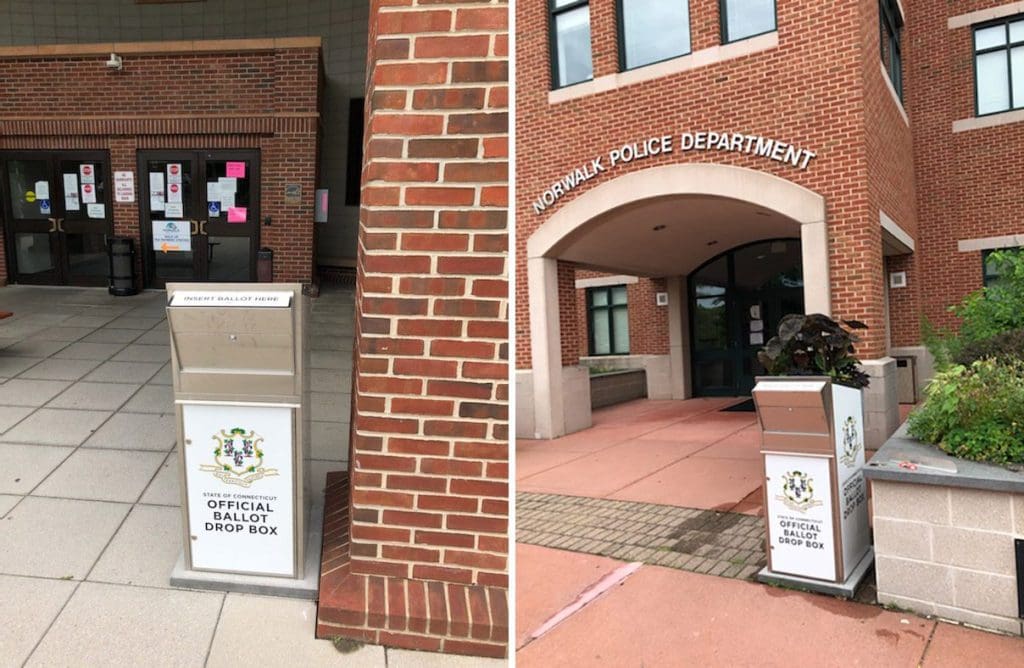 Norwalk has two absentee ballot locations: One at City Hall, located at 125 East Ave., left, and one at Norwalk Police headquarters, located at 1 Monroe St., right. The primary is Tuesday and the Norwalk Town Clerk’s Office has 567 absentee ballot applications to process. (Contributed)

NORWALK, Conn. — The primary is Tuesday and Norwalk Town Clerk Rick McQuaid said there is a “huge concern.”

“There’s a lot of (absentee) ballots that were in the mailing house that just didn’t get sent to people,” McQuaid said. “And luckily, it’s a Presidential preference primary, which, basically everything in Connecticut has already been done. I mean, the candidates have been chosen, the delegates been chosen. This is just a maybe an ego for some people to see how many votes they can get.”

McQuaid said his office was swamped because initial ballots were returned to the state with postage due, so then “trays and trays” of ballots came in, disproportionately, thousands of ballots that needed counting.

Gabe Rosenberg, Communications Director for Connecticut Secretary of the State Denise Merrill, said it’s impossible for ballot applications to have postage due. He characterized McQuaid’s descriptions as incorrect and said Connecticut Town Clerks have been informed at every step in the process.

First, you need to know that absentee ballots can be dropped off in one of two boxes, at City Hall, on East Avenue, or at Norwalk Police headquarters on Monroe Street.

“They’re very, very secure. They’re emptied every day,” and there are many cameras         focused on them, McQuaid said.

If you want to vote in person, Norwalk Democratic Registrar Stuart Wells and Norwalk Republican Registrar Brian Smith “have done an awesome job” setting up the polls, McQuaid said.

“I think the security and safety that they put in place, social distancing and masks, cleaning equipment and everything is probably one of the best in the state,” he said. “But the fear is still there. I have the fear.”

Anger might not be the best word for his mood but, “it’s put a lot of pressure on my staff,” he said. “We’ve been a limited staff anyway because of the COVID and we’ve been trying to do split crews and still get all the other work done too. So, you know, like finding out that all these ballots possibly may have to be re-entered or we have to send the ballots out.”

Everyone is eligible to vote by absentee ballot due to COVID-19 and an executive order issued by Gov. Ned Lamont in May.

McQuaid said, “I don’t know they used the wrong permit number or what they did. But a lot of the absentee applications got returned to the state because they had postage due.”

So for 10 days, town clerk staff was expecting ballots to come in and not many did, McQuaid said. He talked to other town clerks and learned about the unpaid postage.

“I probably have 28-30 notices from the post office that were sent to Hartford with our mail, with postage due letters attached to them,” McQuaid said. When the deluge came in, “they all had to be entered and they all had to be processed. And so that put us behind.”

That work was done before the deadline. “The state was supposed to send the ballots out on the 21st and I think they probably got the last ballots out maybe Friday of this past week, or maybe even Monday or who knows, but in the process of it, they cut ties with the mail house,” McQuaid said.

Cathedral Corporation, which has its corporate offices in Rome, N.Y., was used as the mail house “to facilitate the mailing of both the revamped absentee ballot application and the actual absentee ballot,” a state document said.

McQuaid said, “They claim there are about 20,000 people who sent in applications for ballots, that are having ballots mailed to them throughout the whole state. Because the state has basically said, ‘Well, we’re not doing business with the mail house anymore.’ People are going to just have to figure it if they got a ballot or if they didn’t get a ballot. Or they sent us a partial list of people that they think didn’t get ballots. And so now, you know, we’ve had to scramble on that.”

It’s a nonconsequential primary, but, “If they were doing it to see how they were going to handle the November election, I would have to say they certainly better start working on it at nine o’clock on Tuesday night, getting ready for November because there’s a lot that needs to be done,” McQuaid said.

“I don’t have confidence in having the state use a mail house to control how the elections going to be. I think 99.9 percent of the Town Clerk’s offices work with registrars well in Connecticut, are very, very capable of running the elections themselves,” McQuaid said.

Rosenberg said it’s the first he has heard an allegation of postage due.

“No one here understands what he is referencing, we have had no return mail because of postage (there was a minor issue in 5 small post offices that didn’t do electronic money transfers, but it didn’t delay any mail and shouldn’t have affected Norwalk anyway),” he wrote in an email.

The envelopes were postage paid, so postage didn’t need to be affixed, he said.

“Hazarding a guess,” he speculated that McQuaid was talking about undeliverable mail. There are undeliverable applications in every election, because people move and don’t inform their registrars, and for other reasons like that, he said. For instance, some mail is returned with a note, saying the intended recipient had died. Or, they may have filled out their voter registration form incorrectly, leaving information out.

“We’re always very concerned with maintaining the voter rolls accurately,” so the Secretary of State’s Office went through the undeliverable mail, categorized them by town and “then today, towns across the street got a FedEx package from us with their undeliverable mail,” Rosenberg said.

“That description of what happened with the mail house is not accurate,” Rosenberg said.

An absentee ballot road map was mailed to Connecticut Town Clerks on June 8, he said.

A separate document, the absentee ballot processing guideline, states that the state’s last data drop to the mail house would be on Aug. 3. Then the local town clerks would have to fulfill absentee ballot requests.

So, the “dropping” of the mail house was always planned, and town clerks were notified in advance, he said.

The mail house would send ballots directly to all Democratic or Republican registered voters on July 21 and the town clerks would mail ballots to voters who applied for them online, the road map states.

“The mail house put out 267,000 ballots, which is 10 times more than what you expect in a normal primary,” Rosenberg said. “But when you get down to the end and there’s only 20,000 ballots,” it doesn’t make sense to do them by machine because setting up the machinery would take more time than it would to do it by hand. You put in a few pieces of paper and then reprogram the equipment.

There are 40 ballot styles, “based on primaries and location – aside from the two most common, the presidential only ballots, a very limited number of people get the other 38 or so,” he said.

“We told the clerks that from the beginning and it’s in every bit of communication that we had with them,” Rosenberg said. The “only difference” is that Connecticut Director of Elections Thomas Bromley called Connecticut Town Clerks Association President Anna Posniak and asked if it would be OK for the clerks to do the last batch, which at the time was 14,000 ballots. She agreed.

Posniak sent an alert Monday warning her members that the 20,000 applications that they now had to handle were the result of a failure by Merrill’s office.

“It was brought to my attention this afternoon that Secretary of the State’s office did not send absentee ballot exports for last week to mail house,” she wrote. The secretary of the state’s office provided her with a spreadsheet identifying the voters who had applied for a ballot but would not get one from the mail house, she said.

The instructions in the absentee ballot road map tell Town Clerks to order absentee ballots in an 80-20 ratio, with 20 percent expected to be used by their own office.

“Those 20,000 ballots was not a surprise, should not have been a surprise. It was always contemplated for, it was in the plan,” Rosenberg said. The 20,000 were spread across the state and “there were only 12 towns that had more than 400 ballots… I think Norwalk is one of them.”

The Secretary of States Office called those towns and offered assistance getting the ballots out, as there is federal money available specifically for voting, through the CARES Act, Rosenberg said. One town in Hartford County asked for help.

Norwalk has 567 absentee ballot applications to process just ahead of the primary, according to a spreadsheet provided by Rosenberg.

“We’re just telling people at this point, you know, hey, we hope you get a ballot,” McQuaid said.

People don’t realize the Town Clerks Office didn’t stop when City Hall closed for COVID-19 in March, he said. “We’ve done maybe more land recordings than we’ve done in the months that we were open. We’ve done unbelievable amount of death certificates, birth certificates,” and 117 wedding licenses “just in 20 weeks. It’s not like we’re sitting around and saying, ‘Oh geez, we got this election now.’”

But, “We are well, well, prepared to get this election done and that’s where we’re at right now,” McQuaid said. “We got to hustle next couple days to get, hopefully, everybody who wants a ballot from us out the door and I’m 100 percent positive, we’ll get it done. As far as the ballots that the state didn’t get done, you know, we’re gonna chip at that… But if we can get everybody to have confidence in the ballot boxes and feel comfortable going to the polls, knowing how well they’re set up, I think we’ll be OK.”

I’m waiting anxiously for Duff and company spin on this…Much like Democrats immigration policy and it’s side effects there has been ZERO planning and execution. Our ELL crisis is perfect example of simple minded people not understanding ramifications of poor planning. I fear the impact of voting debacle. On another topic: Have Dems blamed Trump for electric problems in CT this morning? It’s only a matter of time.

Let’s be clear The polling places being ready for in-person voting for the upcoming primary were prepared for by Norwalk Democratic Registrar Stuart Wells and Former Norwalk Republican Registrar Karen Lyons. Remember everyone said she couldnt do her job because she is racist, but now Rick is praising her hard work under someone else’s name. SMH.

The former Republican Registar started months ago in buying/planning acquiring all the necessary supplies to have safe polling places. All the setting up of the polls just doesnt happen in two weeks since her departure.

If you can shop at Home Depot or Walmart than you can vote in a school and have an ID with you.

Any argument about this than shut everything down and be honest.