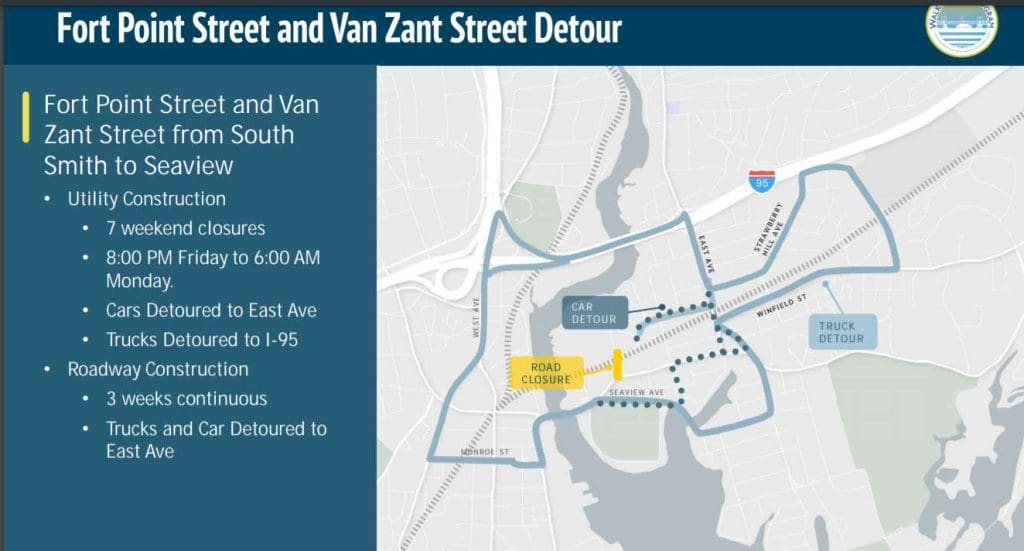 A detour planned for the Walk Bridge project.

NORWALK, Conn. — The Norwalk Traffic Authority acted Monday on a slew of items:

Only two of the three Traffic Commissioners were present, as Fran Collier-Clemmons was absent.

With no comment, the Authority approved a Connecticut Department of Transportation (ConnDOT) plan for road detours during the Walk Bridge project construction.

In conjunction with replacing the aged railroad bridge over the Norwalk River, ConnDOT is replacing every Norwalk railroad bridges. Ann Street is already completed but expected to come are Fort Point Street, Osbourne Avenue and East Avenue.

ConnDOT says its construction will take 5-6 years; the longest disruption is expected to be East Avenue, with four years of construction beginning one year after the work on the Walk Bridge overall starts.

There wasn’t any negative feedback to the plans at a public informational meeting ConnDOT held last month to get public input on the plans, TMP Principal Engineer Mike Yeosock said.

The PowerPoint presentation shows that at various times over 1.5 years, East Avenue will become a one-way street between Prowitt and Van Zant Streets.

Reducing car travel lanes to 10 feet in width will result in enough space to add 7.5 miles of bike lanes, using Community Connectivity Grant funding, Assistant Director for Transportation Services Garrett Bolella said in a memo to the Authority. As Norwalk current has approximately 7.9 miles of dedicated/conventional bike lanes, this will effectively double the amenity.

Disconnected bike facilities resulted when the then-Bike/Walk Task Force got to work because it had no budget, and therefore piggybacked on Department of Public Works projects, Bike/Walk Commission Chairwoman Nancy Rosett said Monday. Now, a continuous “east/west route for bicyclists through the city as well as a continuous north/south route” can be created.

“The east/west routes have a number of schools, major activity centers, and connect to the coast, so we see a lot of value to having the conventional bike lanes as part of this project,” Bollela said.

That will go along Burritt Avenue and Fort Point Street. On the latter, “We’re proposing to move a bus stop closer to Seaview Avenue to add a couple of parking spaces for the community because we’ve had discussions with some of the business owners on this street and they necessitate the need for more parking,” he said.

The north/south route means there will be 10-foot lanes on:

The work will result in consistent travel lane widths in these areas, and 10-foot widths are shown to help reduce speeds, Bollela and Director of Transportation, Mobility, and Parking James Travers said.

Here we got pushback.

“I’m just not sure how the lanes would get any more narrow,” Traffic Commissioner Kelly Straniti said. “I live on Ponus Avenue. So I don’t see that there is room to even add something like that.”

“A lot of the travel lanes are 11 feet wide,” Bollela said. “…It’s really just about accommodating and adding a foot, sometimes even it’s just 12 inches to get that true length for a bike lane and the shoulder.”

The roads are largely 30-feet wide, Travers said. The lanes for both cars and bikes will be “delineated with paint that will also act as his visual barrier and also a visual guide, particularly in this area that is absent of a lot of street lamps. So night driving can be a little bit more challenging. This helps you navigate the road a little bit better… we’re taking any of the pavement away. We’re just reallocating the pavement.”

Mayor Harry Rilling noted that 10-foot lanes were installed on Water Street and Belden Avenue. Despite concerns about buses and trucks, “we’ve had no issues whatsoever.”

The Authority approved the concept unanimously. TMP will finalize the plans and submit them to ConnDOT for approval.

Last month, Rosett asked the Authority to revise the current configuration of Strawberry Hill Road lanes where the road meets Westport Avenue. Rather than having drivers in the left lane go left or straight, and those in the right lane take a right turn, the Bike/Walk Commission requested that drivers in the right lane be able to go straight and those in the left only take that left.

TMP studied the data and returning it to its previous configuration would make it “slightly better off,” Travers said.

The signal is owned by the State and TMP can request that, Travers replied.

“In addition to safety concerns, I mean, the traffic backup there is crazy,” Straniti said.

“I see a lot of people get frustrated about the light, and they end up cutting through the the marshals parking lot. That causes problems for some of the pedestrians,” Rilling said.

Travers is free to make the requests to ConnDOT as the Traffic Authority approved his request.

The Authority gave TMP a greenlight to remove city-related signage on Washington Street between Water Street and North/South Main Street.

Jersey barriers block the parking lots on the south side to allow street dining and the Norwalk Parking Authority has unanimously approved the removal of its meters and signage there, Bolella said. And since the area is closed to vehicles, the City’s signs no longer mean anything.

Those signs are on light poles and are easy to take down, he said. The meter poles will be removed and no hazard will exist, as the spots will be flush with the sidewalk, Travers said.

As for the meters themselves, they may never return.

“I would really love to look at the opportunity of rather installing the single space meters, which, they’re approaching their end of life, I would rather do a parking pay station and continue to remove … the clutter that exists on the street,” Travers said.

Norwalk expects to lower the Washington Street speed limit from 30 miles an hour to 25 MPH, as the Authority OK’d the move and TMP is set to seek State approval.

This is hopefully the first of many speed limit reductions “as we start to analyze roads and make sure that we have the right size road, the right and behaving thing,” Travers said.

Norwalk has a blanket 30 MPH permit but the State doesn’t do that anymore, he said.

“Over the last decade, the City has invested in multiple traffic calming measures on Washington Street, including a raised midblock crosswalk and curb extensions serving as “pinchpoints/chokers,” the design of which has attributed to much lower speeds in the corridor,” Travers wrote to the State. “In fact, most recent CTDOT count data collected from Washington Street, east of South Main Street (count station no. 521) indicates an 85th percentile speed of 20.9 mph (combined) which is currently well below the blanket speed limit approval of 30 mph on this roadway. Based on this information, we believe the posted speed limit on Washington Street from Flax Hill Road to North Water Street/Water Street should be 25mph.”

As most people are already going lower than 25 miles an hour, the State will likely approve the idea, he said to the Authority.

The Authority greenlighted a parade route for Memorial Day weekend, though it’s not certain to occur.

“We may very well have to cancel the events based on the situation regarding COVID 19, the pandemic, etc.,” Rilling said. “…It could become a super spreader event, because we’re still in the process of vaccinating people, although we’re doing a good job.”

The Zoning Commission approved the new plans for Waypointe at Pinnacle in January and now State approval for a new traffic plan is needed, Neil Olinski of Milone & McBroom said.

“It’s actually slightly less, a little bit less intense than what was approved four years ago,” but the Office of the State Traffic Administration (OSTA) “concerned with their state roadways,” he said.

Pinnacle would be the last component of the Waypointe development on West Avenue, replacing the former Loeh’s Plaza with apartments and stores.

“They’ve changed the components of the development significantly, and they increased the square footage by 70,000 or 75,000. And yet the traffic in all categories, it goes down,” Rilling said.

Belpointe Capital dropped the iPic movie theater and the fitness center from the plan, while increasing residential units, and “the way it all shakes out, we look at the statistical trip generation estimates. … you would estimate that there’d be less traffic compared to what was previously proposed,” Olinski said.

The point isn’t that it won’t have any impact on traffic, but whether it will have a substantial impact, Rilling said.

Straniti agreed the project will have less impact than the one that was approved previously.

Jersey barriers will create an alternate pedestrian walkway at 15 North Main St., so diners can sit outside The Blind Rhino, in another move approved by the Authority.

Bruculino, at 20 North Main, already has a jersey barrier amenity.

The three parking spaces that will be displaced are important to other businesses there, like Famous Pizza, Rilling said.

Travers said they’ve spoken to the business owners and “what they’ve asked for is a better way to identify spaces that can be used for pickup and drop off. So we’re running through a couple of different ideas for them right now… largely, that’s what we’re hearing is that their business model has changed, and having spaces that that could be more available for pickup and drop off (is what’s wanted).”

Awesome. 4 years of tractor trailers blasting past Overton’s and Mr. Frosty’s. Should push a lot of beach traffic down Pine Hill too. Lucky us.