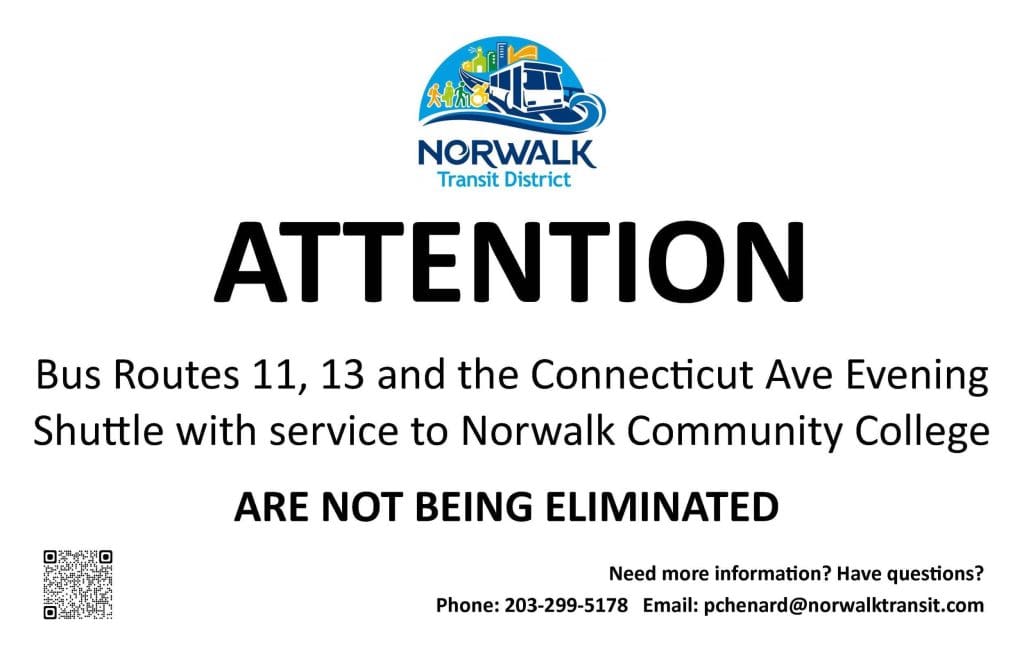 NORWALK, Conn. – A plan to eliminate a shuttle bus for Norwalk Community College students – which hasn’t operated since the start of the pandemic – has inspired a petition with 187 signatures and plans for a protest Tuesday.

“The shuttle has been a valuable supplement to (the Norwalk Transit District’s) regular bus service since 2011 and runs from the NCC campus to the South Norwalk MetroNorth station.  Roughly a quarter of our students rely on public transportation for commuting to and from campus,” wrote Robert Emigh, NCC Professor of English as a Second Language/Interdisciplinary Studies.

Kimberlee Morton, Norwalk Transit District CEO, said the outcry is based on misinformation. Students think Bus #11 is being eliminated because that’s what they’ve been riding, but the shuttle hasn’t operated in nearly two years and was being considered for elimination anyway because of low ridership.

They agree that Bus 11 leaves the South Norwalk train station every 40 minutes. Emigh said the shuttle cuts the wait time for students in half. Morton said that’s only if the student’s train aligns exactly with the shuttle, and it serves students riding trains headed in three different directions, to New Haven, Danbury or New York.

The shuttle was making three trips a day between 7:30 and 8:45 a.m. before it was suspended, Morton said. In 2019, it had a total 5,722 riders for the year according to NTD Manager of Transportation and Planning Paul Chenard, who characterized this as “one or two people a day.”

On Monday, Chenard offered a clarification: it’s 23 people a day.

It cost $80,000 a year and, “We are eliminating it now because there is no ridership,” Morton said, adding that the students aren’t in the school and the situation should be studied when they return.

“When we asked her if she was aware of the inconvenience that the shuttle’s elimination would impose on our students coming to campus, her response was that perhaps the students should just ‘get up earlier.’  We found this response not only insulting to our student body, which by the way is composed of a majority of women and people of color, but also very ignorant as to who students are.  Perhaps she is confusing them with students at private or public universities who live in dorms and who have no other responsibilities other than to walk across a campus to a class.  In contrast, many, if not most, of our students hold down part-time, and even full-time, jobs while working towards their degrees.  I know many of my students who are working full-time and are full-time students.  Many of our students are also mothers or fathers who may need to get their children to school.   To say our students should just ‘get up earlier’ is to denigrate all their hard work and effort to improve their lives.”

Morton said the comment has been taken out of context.  She had explained that it’s public transportation and riders must adjust their schedules as necessary.

There were “significant” cuts in 2016 and riders migrated to the 11 Bus and the 13 Bus, she said. Both operate all day; the 13 takes riders from the transit hub on Burnell Bouelvard to NCC every 20 minutes. Train riders have to walk down Monroe Street to catch a bus to the transit hub and it’s an 8 minute ride.

In addition, Connecticut Transit has a bus that takes people from Connecticut Avenue to NCC, she said. Students could also get off the train in Darien and ride that bus to NCC.

She said, “There’s a tremendous amount of public transit that covers this.”

Meanwhile the Bus-to-Nowhere and the Train-to-Nowhere,upstate, till continue to suck up revenue.

Please don’t unlimited the bus 11 and 13 for people. Because I am student and I need transportation to get to school.

The entire bus program in Norwalk is a money losing proposition. At least the route to NCC is helping a group of people trying to better themselves. We should support that effort.

Most if not all public transit is a money loser, nationwide. But generally it is well worth the money spent and the greater good is served. Except when politicians like Dan Malloy get involved…
Yesterday the supporters of the Bus&Train to Nowhere put out a press release attempting to spin the reality that their Malloy-inspired routes are failures,but pork barrel projects like those are the exception, not the rule in public transportation.

Do not leave young adults & those trying to change their career paths with no way to get to class!! It’s far too expensive to go as it is, why are we damning the future!? The college kids are OUR very near future. Invest in them!! Some azz backwards move to remove the college shuttles. SMFH

Please, Norwalk Transit District, work closely with NCC so that these college students can get to campus! We need to support our college population; it’s the hope of the future for Connecticut.
And can Bob Duff please help out with this? Calling Senator Duff!