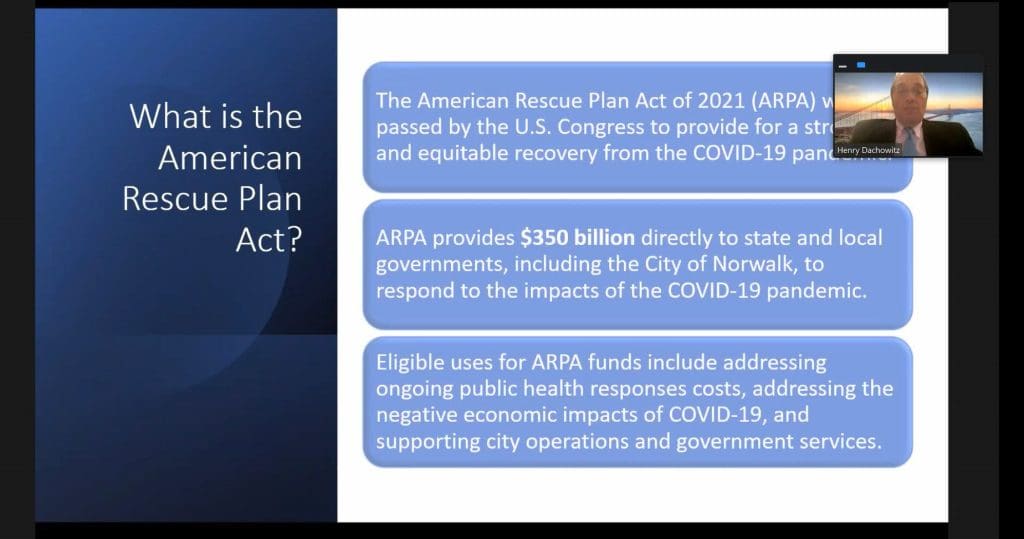 NORWALK, Conn. — Top-level City staff have come up with recommendations for spending the $39 million Norwalk is receiving from the American Rescue Plan, the federal funding meant to aid communities recover from COVID-19.

The proposals, including extensive flooding mitigation, grants to businesses and nonprofits, and Wall Street infrastructure improvements, were unveiled at Tuesday’s Common Council meeting as a surprise – at least to the public – as they were made during Mayor Harry Rilling’s remarks, so, not on the agenda.

During that, Norwalk Chief Financial Officer Henry Dachowitz revealed that the City has $4 million more than advertised in this year’s budget, as changes made to the State’s formula for “PILOT” funding in March were “unbudgeted.” That may mean that Norwalk has $8 million more to work with in ARP funds through the next fiscal year than budgeted.

That feedback resulted in more than 150 projects and initiatives being considered, and then staff worked through other funding sources, including $3 million in MLK Corridor grant money and $3.5 million paid by GGP as part of getting The SoNo Collection approved, she said. HUD (United States Department of Housing and Urban Development) money and approved capital budget funding are also in the mix.

“The exciting news is that more than 90% of those 150 projects, we believe that we have funding for,” Vonashek said. It’s “huge” because not only with the ARP and capital budget funds be capitalized on, but the City can leverage “the different funding sources to bring even more money into the city.”

“One of the things that has held us up on being able to move forward on spending some of the MLK money or the GGP money is that there were so many things that people wanted to do and there wasn’t enough money to do it and it was very hard to determine how to prioritize them,” Norwalk Chief of Staff Laoise King said. “But with this additional pot of money, it’s going to allow us to do almost everything that’s been identified.”

Each project will go through a public process for Council approval, Vonashek and King said.

The funds remain available through Dec. 31 2024 and projects must be completed by the end of 2026, Dachowitz said. This operates backwards of other grants, as the money is awarded and then extensive reporting is sent to the federal government for approval of the expenditures.

About $15 million would be spent on flood mitigation, though not evenly divided over three years as plans must first be drawn, Norwalk Chief of Operations and Public Works Anthony Robert Carr said. 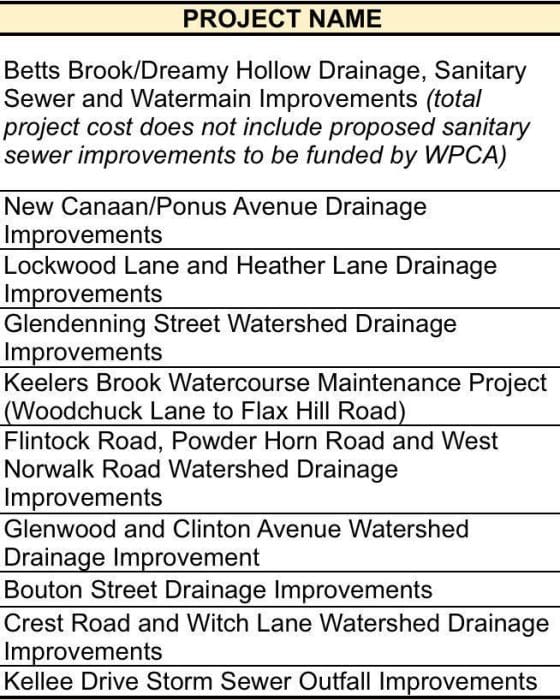 The Norwalk Department of Public Works’ list of areas that might see flooding mitigation. (City of Norwalk)

“This isn’t going to be done overnight. This is going to take a lot of planning but we’re definitely five steps ahead, I think, than many other municipalities,” given that a flooding study was underway and is almost complete.

“This is great,” Carr said. “We didn’t anticipate this, but we’re not complaining, either. So we will do everything we can to expedite, and really look into these studies so that there’s a meaningful difference in the shortest period of time. But we don’t want to do band aids, we don’t want to just rush something and that’s not going to work just for the sake of doing it because then it comes back tenfold to harm everyone here.”

On another front, “We are exploring is high speed internet for the entire city,” Dachowitz said. “… It’s a challenge, because the costs are very high. But this is a unique time in U.S. history, where the federal government is not just endorsing it, but they’re offering grants for 10s of millions of dollars. That would require a public/private partnership with a private company that would work with us on designing the network and explaining how we would implement that. The government wants to avoid allocating funds, and then nothing getting built.” 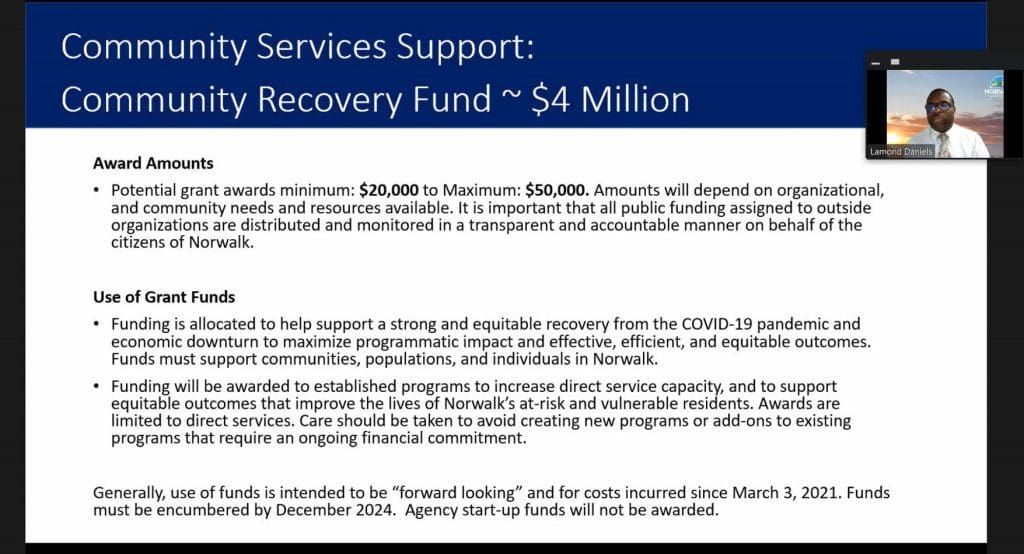 For community services, grants of $20,000 to $50,000 would be awarded following “very strict guidelines,” Norwalk Chief of Social Services Lamond Daniels said. “There’s a whole array of requirements so that we can vet and ensure that the organizations that receive funding, not only are they serving Norwalk because but they’re making an impact.”

It’s also thought that ARP money could be used to improve ventilation in Norwalk’s health clinic.

About $4.5 million would be used “just for retention and growth of small businesses along with job retention and new employment opportunities,” Vonashek said. That includes COVID-impact support, a focus on business run by women and minorities and seed money for new businesses.

Wall Street infrastructure improvements fall under support for businesses and, “This is an opportunity for us to be able to implement the restructuring and reconfiguration of Wall Street, looking at the sidewalks, looking at the roadways, looking at historical lighting,” Vonashek said.

“Next we are looking at environmental sustainability,” Vonashek said. “We have approximately $2 million proposed for this particular initiative.”

About $1.5 million would be spent on government effectiveness and efficiency.

“Really excited about this one too because we know that, saving time and saving money just helps the city of Norwalk not only the city itself but also the businesses that are out there,” Vonashek said. “…One of the things we’ve been talking about quite a bit is the online permitting and licensing.”

“I think we’re really striving for here is to be able to ensure that someone at home can submit an application,” she said. “That application can go through the full permitting and licensing process.”

The user could check on the permit from their home and once it’s approved, receive it via email.

Records would be digitized as well, and offered to the public through a access portal.

And, a 311 customer service platform would establish a “feedback loop” in City Hall to enhance responses. The public health data system would be enhanced.

Lastly, the City would hire someone to help manage and report the ARP funds. 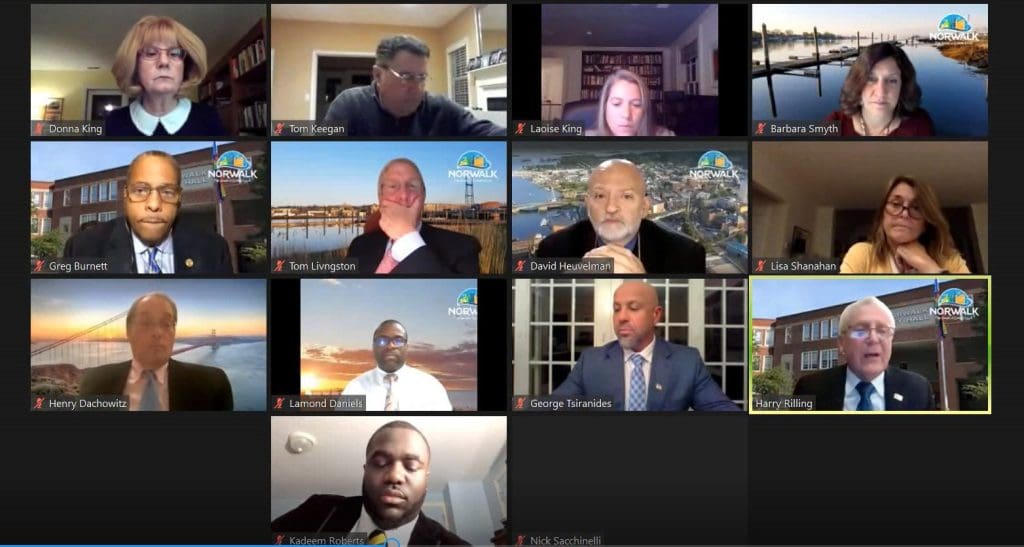 The proposals received accolades from some Council members.

Lisa Shanahan (D-District E) called the presentation “actually fantastic” and said, “you seem to have covered all of the important bases that our city really needs to cover.” She’s “delighted” by the tree plan.

“It was clear that a lot of thought and energy went to proposal and while I’m looking forward to the actual details when they come out I was particularly heartened to see the additional funds put towards flooding,” Tom Livingston (D-District E) said.

“The need for climate action in our city is greater than ever,” Dominique Johnson (D-At Large) said. “…It’s also really heartening for me that we’re using this, these funds now not just to do triage and recovery, but to also try to make that a part of what we can down” to the folks who are children and grandchildren now.

Darlene Young (D-District B) lauded the possible internet connectivity and Diana Révolus (D-District B) agreed with her that it would be good to address Water Street flooding.

“This is really a great opportunity, it might be an opportunity we may not see again in our lifetime,” Greg Burnett (D-At Large) said. “And I’m especially excited about the assistance that will be given to community business and nonprofit organizations to get initiatives off the ground that they might want always thought about but could never afford.”

Johnson asked Dachowitz to clarify that American Rescue Plan funds are not being used to offset tax revenue.

Taxes were kept level through the planned use of ARP funds but now that the PILOT (payment in lieu of taxes) money is in the budget, more of the ARP funds can go to the specified projects, Dachowitz explained.

“Everybody’s had suffering through COVID. By reducing the tax increases everyone benefits,” Dachowitz said.

In April, Norwalk Superintendent of Schools Alexandra Estrella called the City’s budget strategy “fiscally irresponsible,” charging that the City was using pandemic relief money to fund ordinary expenses and NPS wouldn’t be able to meet the escalating needs of students who have fallen behind due to COVID-19. 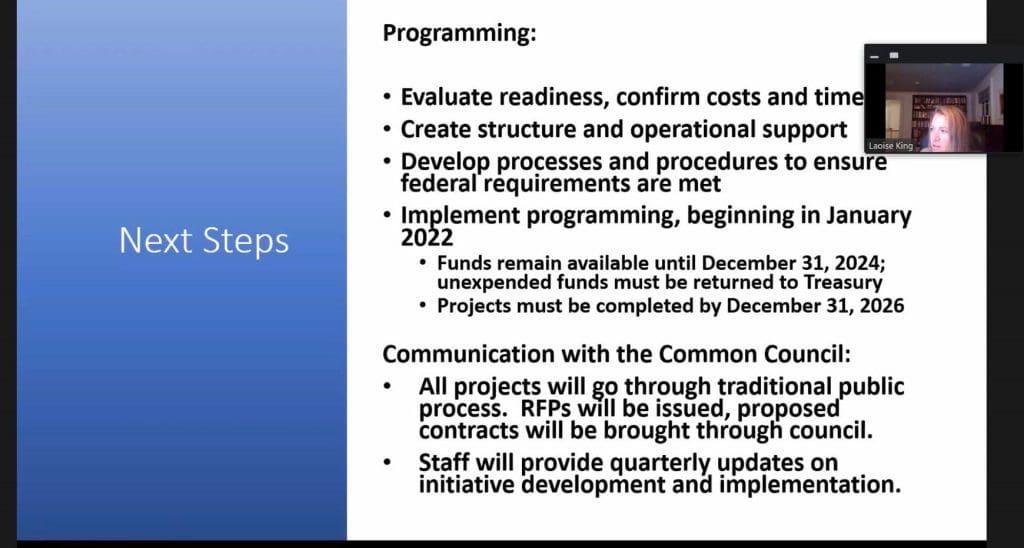 King told the Council members Tuesday that the City wants to get started with the plan as soon as possible, given the deadlines.

“It took the feds a while to get guidance out about what these funds could be used for and we wanted to be sure that we were going to be using them appropriately,” King said. “So we want them out into the hands of the people that need it the most as fast as possible.”

“There’s no perfect plan. There’s only perfect planning, and as you go forward situations change, and the plan can change as we move forward, there could be something else that needs to be funded and other things that might not need to be funded,” Mayor Harry Rilling said. “This is a plan that’s meant to be flexible and fluid and we can make some changes as we go along. The big thing will be the reporting, and we will be keeping the Council briefed, as we do our reporting.”

I hope that the monet will be put the flooding in the suncrest rd and the side streets around that area. It seems to miss anywhere there is a housing project even if it is privately owned but run by Norwalk housing.

I’m thinking I have to be missing something: With all the talk about Going Green and the importance of Electric Vehicles there’s not one mention of funding Charging Stations? Maybe I missed it? I’m sensing charging stations might be just a tad more practical than planting trees?? What the heck?

Point #2 — The city is going to hire someone to manage these funds? WHAT? Did I read that correctly?? Dachowitz should be running this program. Did someone say corruption? At least on the surface that’s what it will look like if an outside “Consultant” manages this.

Point #3 — It sure seems like Dominique Johnson cares more about taxing us than not taxing us. OR was she misquoted ?? Why does every progressive think that people are not taxed enough?? Keep that in mind when voting as the next revaluation will be a doozy. Rowaytonites, are you listening??

Point #4 — Does anyone think there won’t be a major hangover from this
spending across every city in America?

I still love the title of “Chief of Staff!” Since she seems to run the city now and does all the commenting, we should just eliminate the mayor’s position. All these chiefs now in city all and no indians. How many of them are from Norwalk? Can any of them tell me where Stew Leonards is? They will probably say,”Yonkers!”

From this article my top two things would be dealing with the flooding including the creation of an additional sewage treatment plant on the western side of town and the next highest priority is easily municipal Internet especially if we team up with cellular providers and link it was small cell would take care of the private public partnership the build out of the network Cellular coverage 5G upgrades and allow residents and children To have exceptional communications System throughout the town and hopefully also covering the waterways would give us a major competitive edge and probably the ability to fill-in many of the other pet projects. One of those pet projects would be Wall Street the one working on for 70 years and getting nowhere The solution for that is simple whatever money is planned for that area Milligan figure out how to use it he’ll do things like make it look nice and put in municipal Wi-Fi

Unfortunately, nowhere in there did I see any sort of hazard pay/stipend for Norwalk’s first responders? Unless I’m mistaken? Under the parameters of the ARP monies are optioned for hazard benefits to frontline workers. I think Norwalk’s administration is making a dire mistake in not allotting money that goes directly to Frontline workers to include FD, PD, EMS, and nurses from the Hospital directly caring for COVID patients throughout the whole pandemic. Its almost like they are forgotten.