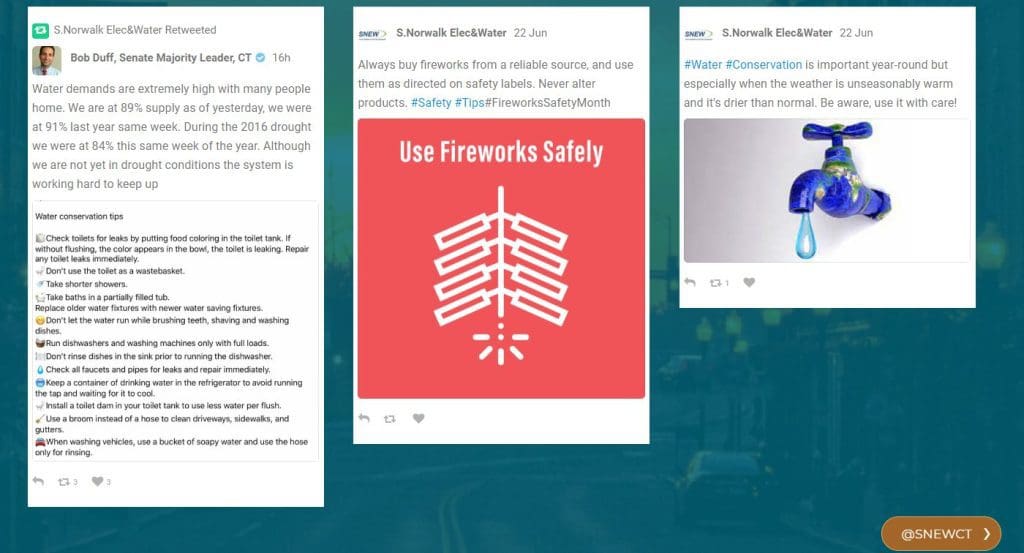 A screengrab of the South Norwalk Electric & Water (SNEW) website.

You are being asked to conserve water. Norwalk is not in a drought yet, but it might come to that, Mayor’s Water Quality Committee Chairman Joe Schnierlein said.

“Water levels are down below the 25th percentile for the Norwalk River and the river itself, Schnierlein said Tuesday, expressing fear of a fish kill. “I also hope it doesn’t force us to go into mandatory drought regulations, because we’re getting that low.”

The Connecticut Water Planning Council warned Friday that the state is experiencing abnormally dry conditions, a Stage 1 “below normal” status. South Norwalk Electric and Water (SNEW) Tweeted on Monday that people should be using their water with care.

Mayor Harry Rilling’s Tuesday COVID-19 update spoke of “incredibly high” water demands due to people being home during the pandemic. “With weather getting warmer, and the area in an extended dry spell, city officials remind the public to try and conserve water where possible,” the update said. “Some examples include not running the water while washing dishes or brushing teeth, using a broom instead of a hose to clean sidewalks or gutters, taking shorter showers, and making sure there are no leaking pipes or faucets. Visit epa.gov for more water saving tips.”

“We are at 89% supply as of yesterday, we were at 91% last year same week,” State Senate Majority Leader Bob Duff (D-25) said in a Tweet. “During the 2016 drought we were at 84% this same week of the year. Although we are not yet in drought conditions the system is working hard to keep up.”

Schnierlein said he thought rain was in the forecast. If not, water levels will keep decreasing. “It’s something to keep an eye on.”

About the low river levels, he said that when it has a good flow it provides oxygen and nutrients to the upper harbor. Low water and high temperatures mean less oxygen and when that happens, a fish kill is possible.

Shellfish not thought to spread COVID-19

Schnierlein, at the June 4 Mayor’s Water Quality Committee, said that the Connecticut Department of Agriculture won’t be testing shellfish for SARS-CoV-2, the virus that causes COVID-19, because it’s thought that COVID-19 is a respiratory disease, not a digestive one.

“There’s appears to be no evidence that you can get the disease by eating anything. And therefore, it’s not worth the test,” Schnierlein said.

This comes as some people express concern about the coronavirus getting into Long Island Sound via treated sewage.

A May 6 article on News Medical Life Sciences states “while the virus causing COVID-19 may be present in wastewater and rivers, the biological agent is typically devoid of vitality and unable to cause active infection.” A Monday article on the same website states that scientists in the United Kingdom and Poland found that SARS-CoV-2 could be stable in water for 25 days, “with the risk of infection by the contaminated water varying by the country’s environment.” The article refers to “developing countries without adequate sanitation facilities.”

Schnierlein said Tuesday that shellfish would have to release a liquid that might have the COVID-19 on it to be considered infectious and the human connection isn’t strong.

“That was a decision that they had to make based on testing availability and everything else,” he said.

“Time will tell,” as there are so many variables with COVID-19 and it seems some tests are accurate and others are not, he said. “It’s just a matter of catching up to all the potential problems and I think with the shellfish there’s been no link to that to people at this point, and in reality, there’s no link to it in any other country that they’ve heard about.”

There are many news articles out there about communities testing sewage to check on the level of coronavirus infections. North Carolina State University is working on it, the News & Observer reported Tuesday, and results from a wastewater testing program have Erie County, Pa., suspectsing that coronavirus is much more widespread than thought, GoErieNews reports.

“The big question is, how accurate are these tests? Which we’re not sure, and how much of a real indicator this can be, and then how much health departments are going to put stock in this and make predictions and decisions off of this,” Schnierlein said on June 4.

“The infection rate based on this wastewater data seems much higher than the cumulative clinical data that we have. So that could be bad news in one way, and it could be good news in terms of herd immunity,” Committee member Steve Bartush said.

That’s an analysis done from sewage sludge, a by-product of wastewater treatment processes, not the released wastewater, he said.

“Chlorine will kill the coronavirus. So even with a chlorinated bypass that should be affective,” Bartush said.

“We’re creating more problems now because we’re washing our hands 10 times a day, eliminating all the bacteria that helps your immune system. And we’re being overcautious rather than letting that herd effect take place,” Norwalk Harbor Management Commission Chairman John Romano said, during the June 4 meeting.

Committee member Dick Harris reported that he’d run two studies on Norwalk Harbor, and the bacteria counts were “unbelievably low. I’ve never seen it like this.”

“Our big test will come when we get a really heavy rain,” Harris said. “We’ll see what happens to that. But right now, all the harbors are showing, and I’m doing five or six of them. All of them are showing really low numbers.”

The mall & the huge apartment buildings all around Norwalk are using a lot of water. Telling homeowners (paying high taxes) in the summer to not water their gardens is not the answer.

Eversource will do to water supply what they have done to energy in this state. Very little has been done to increase capacity and distribution is constantly increased. All those apartments that towns love? They are all new users. Stamford trys to make the case that water waste is not done by apartment dwellers…bosh!
What about that pipeline down to Greenwich? The wealthy can always pay more than you for utilities and will be the last to get their water turned off.
Oh well. Blame COVID and hope for rain.

Everyone is watering their lawn. I highly doubt this 89% number. Go look at the reservoirs. Scary.

Once all the protests pass, we can focus on the real issue – Global Warming!!!!

How much extra water will BLT need for glover 7:

Are you insane to be posting this news Norwalk is to blame for shortage of water. We are not falling for this fake news way to many apartments complex and demand for water. We had a lot of rain this spring. Fake news for faulting mother nature

This is not due to the new buildings like someone commented, or the mall.
Protests will not end unless there is REAL CHANGE.
Instead of blaming global warming or buldings built, how about we address the issue of those people who wastedly missuse water.
Water rates should be more expensive in my opinion. If people valued water more, and were more conscious of their contribution we can prevent further loss