An uncashed check, submitted by Robert Pascarelli to Housing Court as evidence. “How can I give them the rent when they won’t accept it?” he said.

Robert Pascarelli shows off a document he received from Vesta Corporation, titled “Tenants in Eviction.”

NORWALK, Conn. — Robert Pascarelli has been evicted from Cedar Court. He says it’s because he’s a whistleblower who alerted the Department of Health and other agencies to bedbugs, rats and brown water at the senior housing project owned by the Norwalk Housing Authority and Vesta Corporation, which manages the property.

“They set me up,” Pascarelli said recently, alleging that Vesta wouldn’t accept the checks he turned in to pay his rent.

Pascarelli submitted eight uncashed checks as part of the evidence he provided April 27 to Judge Walter Spader in Housing Court. At that point, Vesta said he owed more than $5,100; Spader felt enough sympathy to say that Pascarelli could stay in Cedar Court if he paid the amount owed, even offering a discount. But Pascarelli said he had spent the money on a family emergency.

Today, June 15, is the deadline for Pascarelli to get his belongings out of Cedar Court apartment A7, which was reportedly crawling with bedbugs in mid-2019 and again in January 2020, due to an infestation in a neighboring apartment. On June 3, the 68-year-old heart transplant recipient said he would be homeless, sleeping in his car even with his bad back. Four days later, he said a niece would take him in and he’d be sleeping on her couch. He might even get into an apartment at Miss Laura Raymond Homes, in spite of the bad reference he got from Vesta.

On Friday, Pascarelli stopped talking. He’s suing Vesta CEO Arthur Greenblatt and his lawyer had told him to shut up, he said.

“I am not done with this guy,” Pascarelli said June 7. “Even when I’m gone from here, I am still going to protect these older and disabled people.”

Vesta has not replied to an email asking for comment. Norwalk Housing Authority Executive Director Adam Bovilsky said NHA could not comment as Cedar Court is managed by Vesta.

Pascarelli and a neighbor, Ralph Suarez Santos, have made a stink about the conditions at Cedar Court. Although their neighbors played it all down when NancyOnNorwalk came calling in April, State Rep. Travis Simms (D-140) said he’s personally witnessed rats, bed bugs and foul-smelling brown water. “No one should have to live in these conditions,” Simms wrote.

State Senate Majority Leader Bob Duff (D-25) and Simms co-authored a letter to Greenblatt in late December, saying they were aware of:

Norwalk Health Department inspectors visited Cedar Court in April and May and found no bed bugs or rats, Norwalk Director of Health Deanna D’Amore said June 4. Some plumbing issues were found in April and those were addressed.

In April, Pascarelli said he had thrown out $1,153 worth of belongings at 3 a.m. one day in late 2019 because he returned home from a trip and found bedbugs, he said, describing a janitor as having darted out of the apartment “because there were millions of them.” Vesta had promised to help with that cost but, “They never worked anything out with me. So I deducted the $1,153 from my rent.”

His apartment is subsidized, with United States Department of Housing and Urban Development (HUD) paying the bulk of it. Pascarelli’s share is $399 a month. He didn’t pay it for three months, and when he tried to resume paying it Vesta wouldn’t accept it.

The property manager acknowledged receipt of two checks in a July 2 letter, included in court documents, but told him he had to pay the entire balance and hadn’t set up a payment arrangement.

In October, he started submitting checks for $499, after agreeing to catch up by paying $100 a month extra, he said. He hand-delivered it to a property manager, who accepted it. Then found out months later “that they did not cash and conveniently lost my checks and I had to issue a stop payment, which cost me more of a financial burden.”

Included in the evidence submitted to Spader is a Feb. 11 stop payment from Chase bank.

He received his first eviction notice in November. 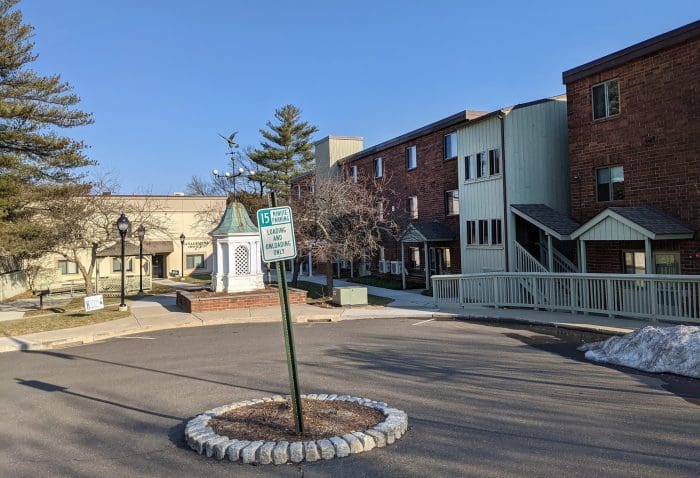 “I was told by management that I need to contact their attorney,” Pascarelli said in an undated letter. “I contacted the attorney’s office and spoke with Tiffany, Attorney Carlson’s paralegal, and was told that they were not aware of any eviction and to contact management (Rebecca Hernandez, Regional Manager) who in turn told me to disregard it and rip it up.”

He didn’t rip it up, he said. In December, he got another eviction notice. The attorneys said it wasn’t an eviction but a payment plan.

“During this time, I found out that HUD has been paying them the entire time {they} were not accepting my portion of the rent, and I was not informed of this,” he wrote. “I am on a fixed income and am disabled. I feel that they did this out of spite, revenge/retaliation for reporting them to Department of Health and other entities, and making them spend money on safety repairs and issues, in other words the ‘whistler blower.’”

Person-to-Person agreed to pay $600 of the back rent but Vesta ignored the offer, Pascarelli said.

Person-to-Person Chief Executive Officer Nancy Coughlin confirmed the agency had dealing with Pascarelli but said he’d need to give permission for them to discuss the case. Reached with that request, Pascarelli would only say he’d been advised by his attorney not to continue talking to the press.

Pascarelli had also said New Reach tried to help him, but Vesta refused.

“They didn’t want to deal with them. So they want me out period because I started the trouble here with everything,” Pascarelli said June 3.

He fought the eviction by filing a special defense, which said his rent checks had been refused and explained the bed bug issue. It claimed that State statute requires a landlord to make restitution “if the bed bugs aren’t resolved.”

On April 27, Vesta Area Manager Cheryl Colbath told Spader she was not aware of Pascarelli submitting checks to pay his rent. The previous regional manager had “mentioned that he had requested a payment agreement, but there was no record of any such request,” she said. 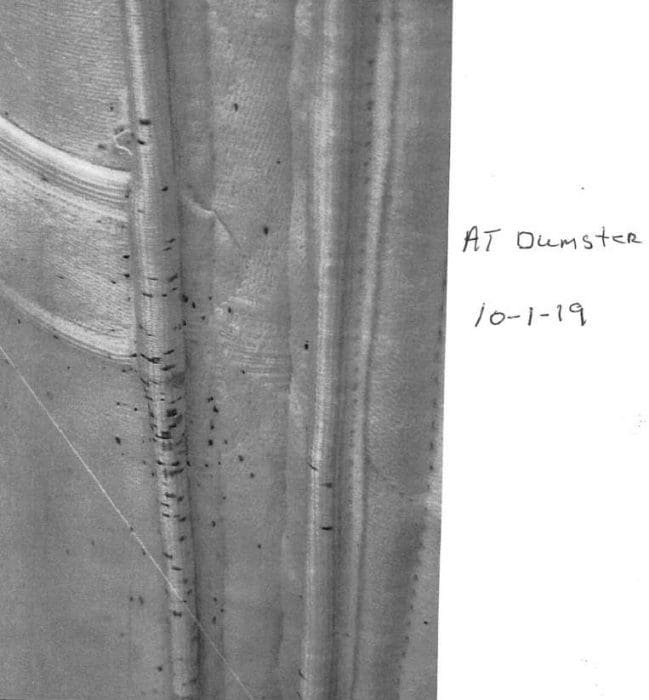 A photo provided by Ralph Suarez Santos, said to be bedbugs on a mattress at Cedar Court.

Pascarelli spoke of the roach he saw soon after moving in four years ago, after being assured there were no insects, an important issue because of his heart transplant. He explained his travails with the bed bugs and said, “I went through hell in here, Your Honor. I had to sleep on my recliner for three months.”

He explained the cost to replace his bed and things, as he can’t take them to a new apartment.

“I have all the receipts. I sent it to (Hernandez). She was supposed to be working this out. Never did,” he said. “…I don’t know why they didn’t accept my checks. And neither did Tiffany from the attorney’s office.”

“But this doesn’t really address why he hasn’t paid his rent, he said. “Now, I could understand if he was escrowing his rent, saying that there were conditions. But as far as I know, he doesn’t have any money put aside, so I don’t understand the correlation.”

Spader told Pascarelli that Connecticut is not a “self-help state.” If there are verifiable problems, you’re not just allowed to withhold the rent and “the law requires that you file what’s called the housing code enforcement action,” he said. The rent money goes to the court and the landlord cannot file an eviction.

“They have refused my checks because I am the whistleblower,” Pascarelli replied. “… I’ve never been late with my rent until all this started.  And the office did not cooperate with the tenants and they’re supposed to exterminate the place the proper way.”

Spader asked if the money was still in the checking account.

It wasn’t, Pascarelli said. “My brother passed away recently, and I paid other bills with the money because they didn’t accept it. Like I said, Your Honor, I was never late. I’ve been here for years, until this problem arrived.”

“If the money was still there, I’d be able to solve this right now, even with some sort of discount for you,” Spader said. “But if there’s no money available, I don’t really have any options available right now, but I’m going to give you some time here.”

Spader gave Pascarelli the June 15 date, with no requirement that he pay rent.

On June 3, Pascarelli told NancyOnNorwalk he filed an appeal but that was denied.

He said he had an apartment lined up at Laura Raymond but Vesta had told his prospective landlords that he didn’t pay the rent, and he had appealed the denial that resulted. On June 7, he said Laura Raymond was reconsidering because his credit score was just under 600. He would know within a few days.

Family and Children’s Agency had no place for him but would help him with his first and last month’s rent, he said.

“They’re all good people,” he said. “So, there’s a little light at the end of the tunnel.”

On June 3, NancyOnNorwalk asked if it had been worth it. He said, “I think I was right for these older people here, yeah.”

NancyOnNorwalk did not attend the April 27 hearing but got a recording from the State.

I removed a mattress with a gallon of bed bugs in it. I have pictures of the rats and much worse things happen there. Ezra Priest died today who was evicted from Cedar Court. RIP. Lizette was tormented. The Housing Authority is a criminal enterprise. The Norwlak Counsel settled with Arthur Greenblatt for $1.2 million. Ezra was a Veteran disabled mute. The City should ashamed of itself.