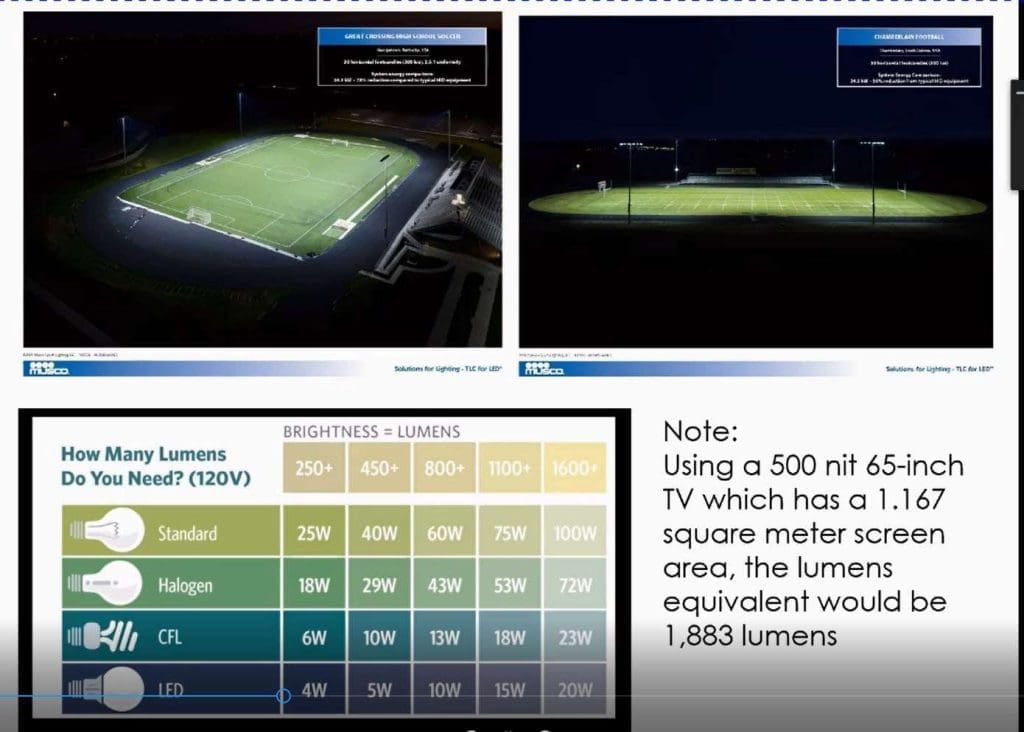 A PowerPoint slide shown to the Norwalk Zoning Commission on Wednesday by Mike Mahoney of Musco Lighting.

NORWALK, Conn. — The City is free to begin construction on a new softball field at Brien McMahon High School, even if neighbors are not persuaded that the lights won’t be shining into their homes.

“This is a beautiful street, a beautiful community. And it’s going to be destroyed by that dome of light that is going to sit there,” James Wehrle said Wednesday, unsuccessfully trying to convince the Norwalk Zoning Commission not to approve the field and its 60-foot-tall light poles.

“A lot of neighbors are concerned with the light pollution and I certainly don’t take their considerations lightly. I mean I, you know, I take them seriously. But on balance, my feeling is that the application is justified, and … I think they’ve taken care to limit light pollution as much as possible,” Zoning Commissioner Joshua Goldstein said.

Objecting to the lights and ‘scope creep’

A new softball field has been part of the capital budget process for at least two years, a replacement for the field that fronts Highland Avenue.

As a concession to the outcry at phase I of the Zoning Commission public hearing on the proposal last month, the City is planning to add more trees to the proposal, not only to mitigate the lights but the noise, she said. 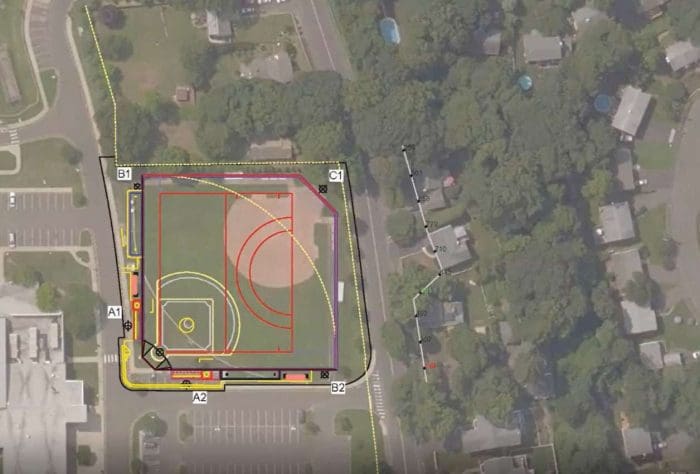 A diagram of the new field plan, superimposed over a photo of the existing field. It includes a half field hockey surface for practices.

Mike Mahoney of Musco Lighting gave a prolonged technical explanation of the advanced lighting system that’s planned, comparing lumens, candela and watts of bulbs old and new. The lumens from a big screen TV would be twice the glare produced by the field, he said.

Plus, the previous technology results in “stacks of fixtures” creating a mass of light, but now, there will only be six poles, he said.

“This is a very regimented, very controlled, directed system. And with LEDs, that’s designed to only light the field with extremely minimal spill,” Jeff Olszewski of Stantec said.

Neighbors were skeptical. They had been told to go to Nathaniel Ely to see the new lighting system there, but “the lights were actually incredibly glaring and blinding,” Beth Koehler Wehrle said.

She and her husband fully support the need for a new softball field, as they see the current field “turn into a mud pit” when it rains, but “it really is the lights that we have a problem with,” she said. Not just the light spread but “this huge illuminated field” across the street is going to be “so incredibly bright.”

The girls won’t use the lights very often, given the time of year they play, she said, characterizing the setup as giving “an ugly industrial look to the school,” which they will live with 24/7.

“I don’t want a desk lamp the size of a baseball field across the street from me. I don’t want to live across from Mount Rushmore or the Statue of Liberty,” James Wehrle said. “They’re great. This is my home.”

Others joined in with decrying the expense of the lights, which officials say are needed to give the girls the same opportunities the boys have and avoid a Title IX legal action against the city. Melissa Aragona said that if the planned light poles had been there five years ago, she wouldn’t have bought the house.

In addition, she was skeptical that the field would be used as Interim Recreation and Parks Department Director Ken Hughes and others say it will be, because “when you upgrade facilities, you know, kind of, if you build it they will come, sort of thing.”

Jenny Plath said she was also worried about “scope creep.”

The resistance was not unanimous, as Morgan Lister, another neighbor, said, “I don’t want to be part of the reason why the girls can’t have an equal playing field…. My wife and I both fully support this project.”

Matthew Smith, a Rowayton resident, said, “I can appreciate that it’s a disturbance to people who live directly next door, but the benefits to the dozens, even hundreds of girls who are trying to play softball and trying to get games in and trying to get practices in on our limited fields, I think is very important.”

Zoners put language into their approval aimed at making sure the lights are off at 9 p.m. and that the lighting performs the way Musco says it will.

Goldstein said it’s not just the equity aspect, but a new field “puts us in line with the POCD (Plan of Conservation and Development), which is an important thing for us.”

“I’m not overly concerned about the aesthetics,” Zoning Commission Chairman Lou Schulman said. “Clearly 60 foot light poles are not going to be terribly attractive, but I’m not overly concerned about that. Is this going to have some impact on the immediate neighbors? I think it possibly might. But I think that the other goals of Title Nine in particular outweigh that. I wish it were otherwise. But I’m inclined to approve the project.” 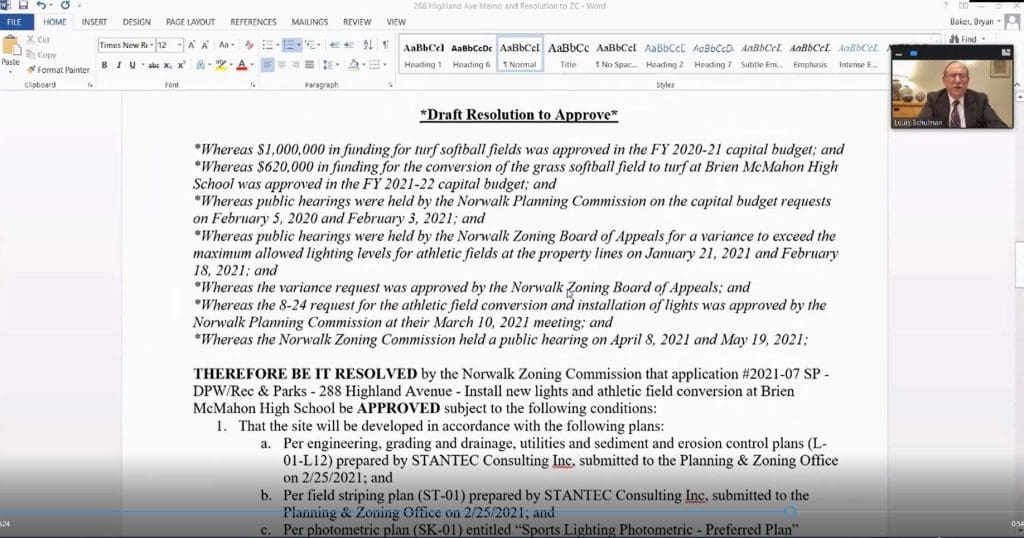 Lights are just unnecessary especially in the front of the school in the face of these people . This town is sad. If you don’t have the real estate on site there’s 3 fields at the beach with lights . No shame in playing off-site . It’s can be done.

I am a HUGE Baseball Fan. I am also a HUGE fan of Women’s Sports. I am a HUGE fan of High School Sports. HOWEVER, don’t you think we need to be practical? Shouldn’t these funds be used for better purposes? To be frank anyone associated with High School Softball knows that McMahon hasn’t been able to field a competitive team for 5 years. (I think they’ve won 5 games in 5 years?) Let’s look a current demographics: Does the student population in Norwalk schools suggest we build a multi million dollar softball field? I don’t think so.
I hope Lou Schulman was misquoted. He’s on the zoning commission and he’s not concerned about aesthetics? When you think about that sentence it truly makes your head spin. — I’m currently binge watching a show about Russian Spies in America on Amazon Prime. I believe quotes like that helped make the Soviet Union the economic disaster it has become. The other goals of Title IX ? What the heck does that mean ?
Let’s take a step back and truly think about what’s needed in Norwalk right now — I’m sure McMahon athletics can use the money more wisely.
How about building a Girl’s Bocce Ball Court ? That would solve Lou’s points regarding Title IX, reduce lighting issues with neighbors and with a little recruiting build a Bocce Ball powerhouse we can be proud of.

John, What competitive HS teams in Norwalk deserve a field? I’ve watched Norwalks HS sports teams in the last 10 years go from competitive to average to laughingstocks of the FCIAC.Maybe if Norwalk had decent HS facilities you would’nt have the best players leaving to play for private schools.Go to a HS game and sit with parents watching their kids getting blown out game after game.I guarantee you nobody is joking about bocce ball courts.