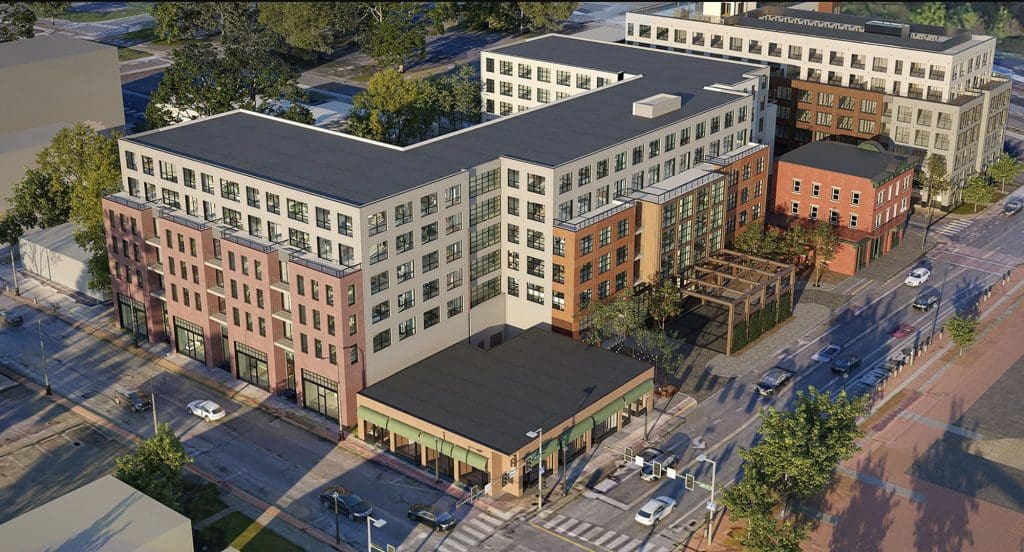 A rendering of the plan for a Spinnaker development that would rehabilitate two Monroe Street buildings and add 150 apartments, retail and restaurant space to SoNo. At lower right is the plaza at Norwalk Police headquarters. At upper right is a building already under construction.

NORWALK, Conn. – The area around Monroe, Chestnut, and South Main Street could see 150 residential apartments, commercial, office, retail, and restaurant space added if the Zoning Commission approves a new plan for the area.

Plans for 8, 10, and 18 Monroe St., 2 and 4 Chestnut St., and 75 and 77 South Main St. were presented to the Zoning Commission recently by Coastal Lofts LLC and Spinnaker Real Estate Partners, which has properties in Norwalk including Ironworks SoNo, the Shirt Factory Lofts, and the Corset Factory.

The properties are about one block from the train station, all within the city’s “Sono Station Design District.” Plans include a new structure, as well as the “rehabilitation of the existing commercial structures” at 8 and 18 Monroe St. The new building, which will have fronts along all three streets, will include retail along South Main Street and resident amenity use along Chestnut.

The residential units will include:

The plans call for 153 off-street parking spaces and a minimum of 15 affordable housing apartments.

A “courtyard” in front of the new building, between 8 and 18 Monroe St., will allow some drop-offs and pick-ups to occur, similar to the Ironworks courtyard, according to Colin Grotheer, project architect from Beinfield Architects.

“The main feature is approximately an 8,000 square foot focal point courtyard,” he said. “One of the key elements, as I said, is this courtyard that integrates with the public space on the sidewalk … This project seeks to fill in one of the missing gaps in-between the train station and the Washington Street district, so we’re hoping that this is going to be a period of relief close to the train station where people that are going to and from can patronize a cafe or a restaurant that may be adjacent to the to the plaza.”

Grotheer said that this would be a “multifunctional space,” that would help “pull through” pedestrians from the train station.

“It would be very similar to the Ironworks courtyard where it could be closed for events and more pedestrian access but would allow the space to be used during the daytime, and during the off hours when most plazas aren’t busy,” he said.

The look of the building behind it would include industrial elements to relate to the area’s history, Grotheer said.

“The facade facing the courtyard is being seen as speaking to the industrial heritage of South Norwalk, with steel beams, sculptural canopy that comes out of the building, large glass openings with large steel windows,” he said. “And we’re hoping that we can, Matt (Edvardson of Spinnaker) and the team can get some operators that will allow some frontage for activity on the flanking sides of the courtyard.”

Parking will be in the middle of the building, and will not be visible from the street. The original entrance to the garage was proposed off of Monroe, but comments from city staff prompted an effort to move it to South Main Street, Edvardson said.

Inside the property, the entrance to the residential area off of the courtyard will be “hip and cool,” Grotheer explained.

“The concept is that it’s a high end, boutique hotel-like residential lobby,” he said. “So, you would have a very cool and hip feel. Some of the hotels in lower Manhattan are the inspiration for that. And we really think that that’s going to be a fantastic space with mixed materials and textures and plantings that are appropriate and really revitalize this almost pocket park-like piece of the project.”

Residents will have access to multiple amenities, including an outdoor pool that will be on the third level of the property.

The historic former hotel building at 18 Monroe St. would be rehabilitated and would be primarily commercial and office use.

“The hotel building on the corner is seen as being renovated and brought back into compliance with current building codes and providing some commercial space and mixed tenancy,” Grotheer said.

The building at 8 Monroe and its tenants would remain and receive mostly a facelift and a facade upgrade, he said.

Between those two sites, the new building would also offer new commercial space along the front.

A “quad of storefronts” would feature “kind of a modern interpretation of a traditional storefront, with the large shopfront opening and transom in the middle, a recess, and an alcove along the street that provides differentiation between the buildings and allows for balconies,” Grotheer said.

The city is waiting for a peer-review architect to make their remarks on the property, according to Planning and Zoning Director Steven Kleppin, before the application can advance to a public hearing. That hearing could take place as early as the Commission’s second meeting in May.

Great. Another apartment building. I can’t wait for even more congested roads in Norwalk. Maybe the city should just become one huge apartment complex surrounded by large parking areas. And, if it adds a few more big box stores and Chik Filets maybe we achieve gridlock everywhere in Norwalk.

My god, how many more apartments can we possibly jam into this town before we address infrastructure. How about schools to support the 1 million new apartments. How about improving and widening roads to support the added traffic. What about the reservoirs to provide drinking water or the treatment plant to dispose of the waste?

Oh, how many tax credits are we going to give away for all this? STOP ALREADY!!!

No more apartment buildings! Norwalk is not NYC so stop trying to turn our town into something it’s not. Enough already!

Traffic nightmare , narrow 2 lane road in all directions . May have to take out police station sidewalk now to make a right turn heading south . 46 studios to what? lessen water , sewage and school over crowding

Zoners! Reminds me of the time I brought my son to City Hall and he laughed so hard about “Zoning” lol.

Only questions are, is a 1/1 parking ratio sufficient? I noted 46 studios in this article. Is Spinnaker assuming that some residents will not be driving? Is that what they’re seeing at Ironworks/Shirt Factory/Ann Street? Lastly, is the parking going to be podium? Couldn’t tell from the rendering.

I don’t have a lot of sympathy for NIMBYs. You can’t make them happy. Of course we all wish for expenses to decrease, so tax rates can go down, so rents can stay exactly the same forever… wouldn’t that be nice. Unfortunately, reality persists despite the resolute urge to bury our heads in the sand like ostriches. No city in the history of human civilization has remained in stasis apart from the necropolis at Giza. That place is dead…

This is disgusting! More apartments??? This city isn’t concerned about the traffic this brings or the pollution of more cars. What about small homes? No more apartments or retail, please.

Eric – since all the apartments have been built (or not built – Wall St disaster) and that supersized mall – taxes have not gone down and I doubt that any of this “growth” will stop them from going up.

Please stop the apartments! Every day the new news in Norwalk is another apartment complex. When will this administration stop!

Norwalk is crazy and getting out of control with apartment buildings. And you notice minimum of 15 affordable housing apartments ? hmm just say Section 8 and stop with the spin.