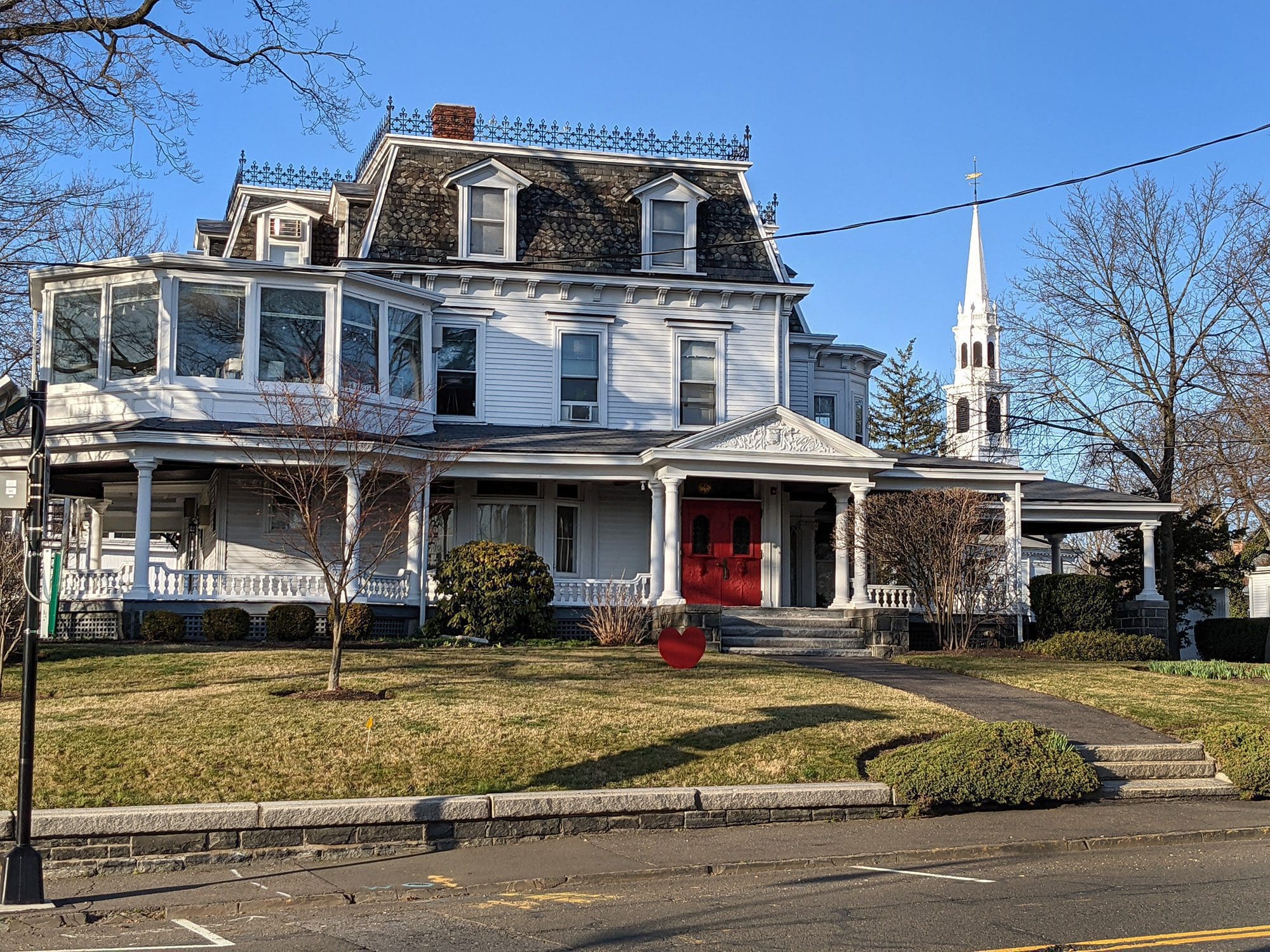 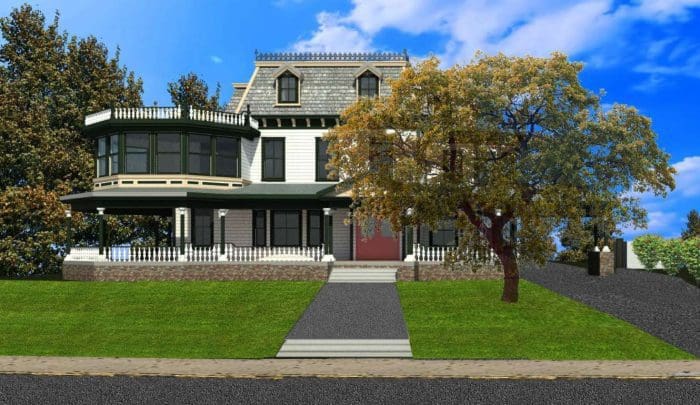 A rendering of the plan for 3 East Wall St.

NORWALK, Conn. — The historic Morgan-Lockwood House, built a century and a half ago, will undergo a full-scale renovation and be joined by a new building on the same site as part of a historic preservation development approved by the Norwalk Zoning Commission.

Together, the projects will add 26 units, three of them affordable housing, to the 3 East Wall St. site next to Raymond Funeral Home and across the street from the Norwalk Historic Society’s Mill Hill.

“The way to describe the whole purpose of this application is this unique historic architecture contributes positively to community and village character. But the age and construction of these structures make them particularly vulnerable to degradation caused by use and the passage of time. As such, significant investments are needed simply to maintain these properties, and more is needed to revive them to their past luster,” said Craig J. Flaherty of Redniss & Mead, a consultant on the project.

Flaherty likened the project to 3 Elmcrest Terrace, also done by the Gaglianos.

Like the Elmcrest Terrace venture, the Morgan-Lockwood project will enable them to improve a building with unique historic character and allow for infill development, which “provides the investment resources needed to spur the rehabilitation of these buildings,” according to Flaherty.

In this case, Flaherty said, the investment in the historic structure will be recouped from the building that’s being added. 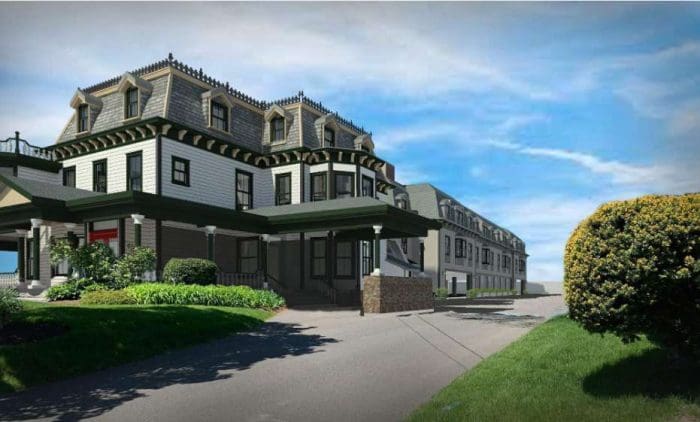 A rendering of the plan for 3 East Wall St., absent a tree at right.

“This really is the minimum needed to make everything you see proposed here happen – with the subsidized workforce housing units, with a significant and thorough restoration of the front building, with the fact that we have to get rid of five units to add the 15 – this is a very tight financial gambit to really even do what you’re seeing here,” he said. “So, any reduction of that coverage would probably stop the project.”

Some local property owners raised concerns about its size.

“While in principle, I’m supportive of the development, I don’t believe that its scale is consistent with any other property in the area,” said Bradford Craighead, who owns five nearby properties.

John Lesko, who runs the funeral home next door and is working to purchase the property it sits on, had concerns about how this development would impact his business, particularly during construction. He also questioned the size.

“I certainly endorse the project of restoring the manor house and certainly understand that it takes putting more apartments on there to support the ability to do such a project. I do question the number of apartments that are going in,” he said. “I do believe that the size of the project is overwhelming for this particular area and community, and a little bit more breathing room between the buildings, and perhaps a few less apartments in order to establish that would be a better way of approaching it.” 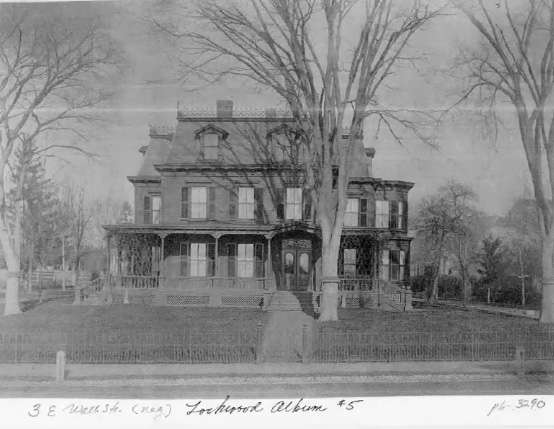 3 East Wall St. in 1870, in a photo shown to the Norwalk Zoning Commission by Norwalk Preservation Trust President Tod Bryant.

Before approving the project through a special permit, the commissioners also approved a text amendment to allow “historic preservation developments in the East Avenue Village District by special permit.”

The text amendment would allow historic preservation developments that meet certain requirements to have a larger maximum building area and a greater residential density than the current East Avenue Village District requirements. The amendment would only apply to properties of 30,000 square feet, which would include four other possibilities: the Norwalk Inn, St. Paul’s Church, the First Congregational Church, and Collins Funeral Home. The amendment would allow for a building of three stories and 35 feet, with a maximum building area on the site of 40%, and 1 unit per 1,250 square feet of lot area, with a maximum of 36 units.

“The language here really is a mirror of the language you have in the other zones in order to encourage the preservation of a structure that is contributing to positive aspects of contemporary character,” Flaherty said.

Flaherty said  the rehabilitation and new construction will also allow for site improvements, including adding drainage on the site to stop from runoff onto Lesko’s property.

However, this will end the agreement between 3 Wall Street and the neighboring funeral home, that allowed visitors to enter on the funeral home property and exit on 3 Wall Street. Lesko said he wished there had been more “neighborly notice.”

“I took the opportunity to repave and to put in new drainage and new landscaping at the funeral home, which I’m very proud of,” Lesko said. “I really wish I would have known that the project was going to eliminate my exit. My entrance is now going to have to serve as an entrance and exit, and where I did widen as much as I could next to the building up in front and by the curb. It kind of bottlenecks down. I do feel a little bit harmed in the sense that I’m going to have to go back.”

Even though the 3 Wall Street project will have the 1.3 parking spaces per unit that are required by Zoning, Lesko said he was concerned about apartments with multiple vehicles.

Craighead also called for more pedestrian improvements to the area around the Norwalk Green to accommodate both the new residents that would come with this property and the existing ones.

“This is an opportunity to consider undertaking a traffic safety plan, with additional crosswalks at East Avenue and around the grid. If this neighborhood is truly the gateway to Wall Street, we need the city of Norwalk to literally pave the way for people to get there using their own two feet safely,” he said.

Resident Diane Cece voiced concerns about the left turn out of the side, particularly as traffic can queue up as drivers wait to turn off Wall Street and onto East Avenue at certain times of day.  Flaherty said that there would not be a left turn limit and that residents would figure out what the best and safest way for them to leave would be.

Gagliano Sr. said he believed that by preserving an historic site, the project would benefit Norwalk.

“To save this building, it’s literally falling apart around itself … and I know of no other way to finance the restoration that’s involved in that manor house, so this is our plan,” he said. “We think we put everything on the table, everything we could afford, including the workforce housing, that was something that we suggested, and no one asked us to do. But it’s important to us, we build. We build affordable housing throughout the state. And it’s something my son and I believe in.”

The project would aim to keep the historic integrity of the house, even using paint forensics to determine its original color.

A rendering of the plan for 3 East Wall St., showing the planned building in the back.

Craig J. Flaherty of Redniss & Mead shows a map of the area to the Norwalk Zoning Commission. 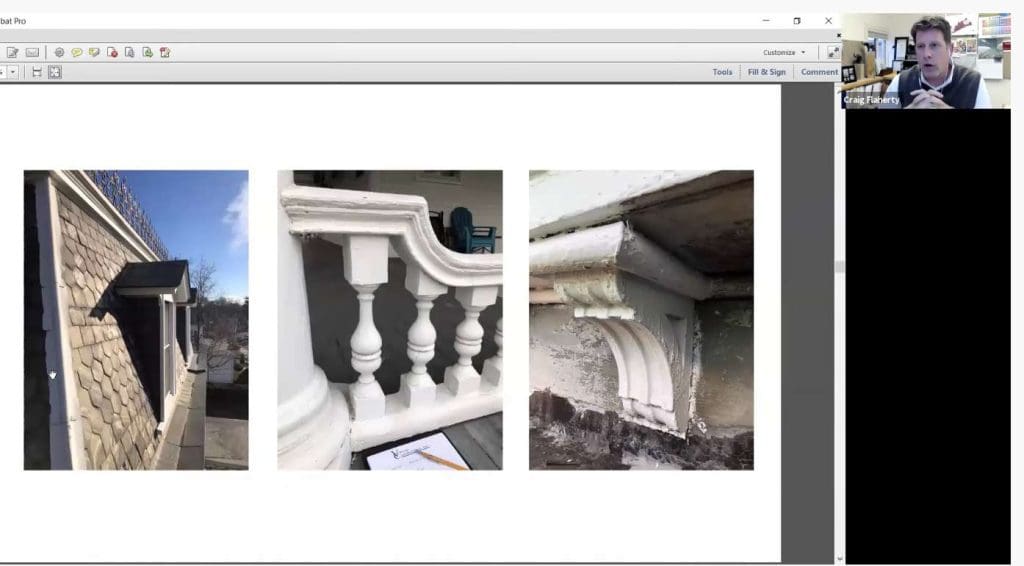 While we’re discussing the East Side of Norwalk I thought I’d check on Chris Perone’s attendance at committee meeting this season. Keep in mind meetings are Zoom and you don’t have to get out of bed to attend:
Banks — 20% missed
Energy – 17% missed
Finance – 100% attendance — Congrats on that

Without delving into too much detail the 137th district is probably the least represented in committee meetings in Connecticut over the past 10 years…
On the flip side kudos to Lucy Dathan for her enthusiasm and actually showing up for her constituents. I may not agree with Lucy on everything but at least she shows up.

1.3 parking spaces per unit? Is that realistic? Norwalk is not a walkable town. It’s a small city that requires transportation for basic life needs: groceries, commuting ( even to MNRR), doctors, churches, and the beach, etc.

And, is anyone else puzzled by the complete lack of architectural sympathy the added rectangular “motel” has with the classic , sweeping gracefulness of the original house?

@E Clem. Rectabgles are easy to design and build. There you go!!

E, I wouldn’t call it a “complete lack of architectural sympathy.” The roof line is carried over and the upper windows reflect those of the manor house.

Farce. Complete and utter farce. These developers want you to think that they’re doing the city a favor. This is the 2nd property these guys are shoehorning apartments onto, and they have the nerve to slap a “historical preservation” tag on this? They complain that the building is falling apart, so, in order to maintain it, they have to add 15 more apartments? Seriously? How about selling it to someone who can actually afford to maintain what’s there…

Historic preservation is noble and all, but it’s absurd that this is the issue that gets people riled up.

People, we are in the middle of a housing crisis. Maybe it’s not “SF bad”, but it’s bad. My tiny apartment in SONO costs 6x per sqft what my place back home in STL did.

And all that’s getting built right now are even more expensive, cramped luxury condos. We spent what, a couple hundred thousand on the SONO Plaza park next to Evarito’s, and we can’t be bothered to make 17 Washington (that big brick building west of it) fix their broken windows, or make the CTown clean up their sidewalk?

And that’s not even mentioning the veritable slums just south of SONO. How about instead of either (A) cracking down and fining into oblivion a bunch of Norwalkers just trying to make a decent life, or (B) paving them over so we can build more luxury condos, let’s (C) upzone the area by one increment and let people do what they want with their own property?

Incremental development is how everything we consider “historic” about Norwalk was originally built, before we started parceling out enormous subdivisions far out of walking distance from the places which we supposedly loved and now insist on protecting.

Until we stop the farce of what the Mayor and his big developer buddies consider “modern” development, we’ll never have the traditional incremental growth that served us in times before.

I bet we could fit 1000 apartments on the green, then just put the green on top of them.