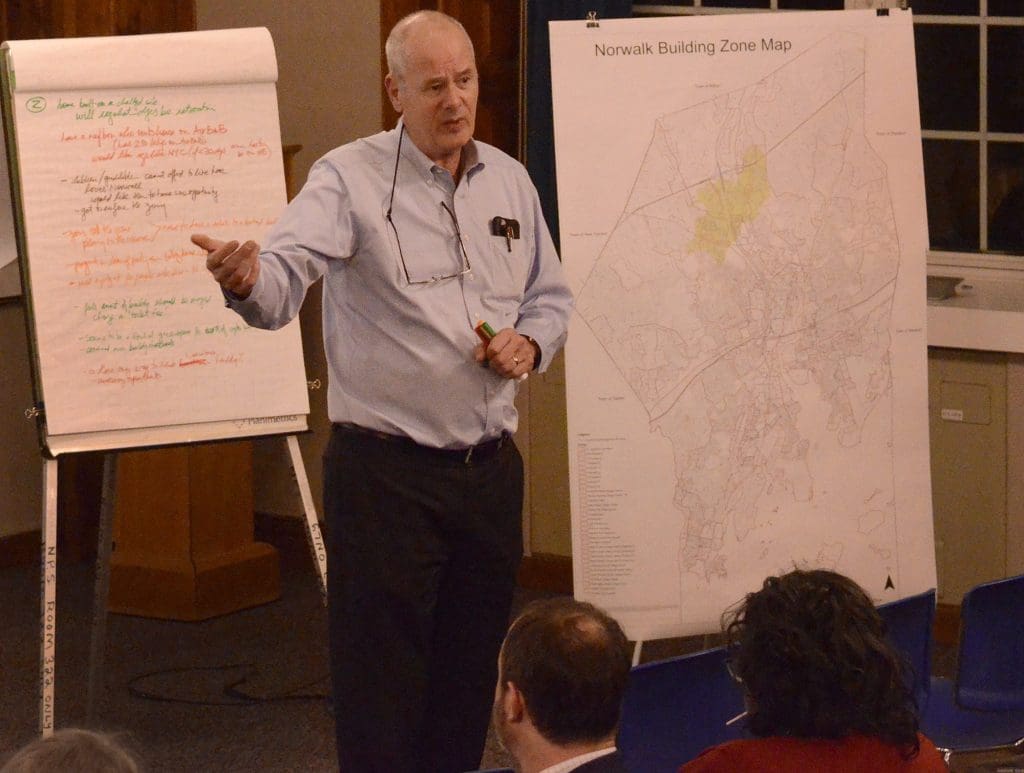 Chalder, speaking to about 90 people at a City Hall outreach session, likened the hoped-for Zoning regulation overhaul to defragging a hard drive.  Residents then gave the Planning and Zoning Department the feedback it was seeking, with two consistent themes emerging: desires for affordable housing and funding for zoning enforcement officers.

Mayor Harry Rilling promised Zoning reform when he was first elected six years ago. A Zoning task force fell apart and then in 2016, Planning and Zoning Director Steven Kleppin was hired. Money to begin the process was allocated in June.

In September, Planimetrics was awarded a $20,000 contract to collect feedback from the public and recommend Zoning regulation changes and estimate the project’s cost. The actual overhaul would be funded in next year’s budget.

While the regulations call for developers to provide 10 percent affordable housing if they’re building 10 units or more, that’s “nothing,” he said. “They’re basically laughing in your face, because they know down the line, that 10 percent is going to be made up by raising their raising the rent of those people.”

She advocated for making developers who build commercial or industrial structures contribute money for affordable housing. The requirement for apartment buildings should be upped to 20 percent, she said. The apartments should be affordable for families making 60 percent of the area median income instead of the current 80 percent, and there could be a 50-50 mix of 60 and 80 percent.

“We get calls every day from families who say they want to stay in Norwalk or want to move to Norwalk and they work here, and they can’t afford it and there’s nothing we can do about it,” Bovilsky said.

“Most of the regulations make sense,” Gary Oberst said. “We don’t want contractors’ yards running in residential neighborhood you know, old unregistered, rusted out cars parked on our neighbor’s lawns. This job is rewarding because I feel that I’m doing my small part to maintain a high quality of life in normal. I have no problem issuing fines to those who buy because most of them make sense. But some regulations do not make sense.”

Most people are not allowed to park in front of their garages or next to their house, even if there’s room, he said. A garden shed cannot be on the edge of a property. Residents come in for a hearing without any idea that they were doing something wrong.

“I personally cannot agree with many of these regulations, but I must enforce them,” he said. “As a hearing officer, I’m required to follow regulations, even if I think they’re causing more problems than they are solving. I hate to force people to park on the street when there’s plenty of room in their driveways. But I have no choice.”

Plus, “The city does not generally go looking for violations. They only respond to complaints. The complaints are almost always from neighbors. So the vast majority of violations are never addressed,” Oberst said.

There should be roaming enforcement people, and many people in the audience would be happy to lobby Rilling for funding, Diane Lauricella said. Diane Cece also promised to bring residents out to support funding for enforcement; Patsy Brescia said she’d be advocating for it.

There were other complaints; one woman said that four years after she bought a home, her neighbor began renting out the house next door on AirBNB.

“Basically every three or four days there’s a new family in the backyard,” she said.

Bobbie Kin asked if there could be allowances made for “humanitarian hardships.” Aging parents or handicapped family members could live in accessory apartments, she said.

Chalder responded that the state-defined hardship refers to things like regulations being applied to oddly shaped lots. But, “Maybe we can craft a rule that says under certain situations, anybody can have an accessory apartment.”

Another resident spoke of people illegally closing off waterfront property from the public. Chalder opined that Zoning might not be the best took for dealing with that.

“There’s tons of illegal apartments in the city,” another said. “…. There should be some type of a code or a ordinance that will allow the fire department, the police department, a way to go in and check how many how many people are living in the house because now that’s further burdening our school system.”

“We have no limit on the number of apartments have been built in the city. There is no balance required between home ownership and rentals,” Adolph Neaderland said.

Danny Grundman was focused on supplemental regulations for residential zones.

The next step in this process is to develop a budget request and hopefully have it funded on July 1, Kleppin said.

Costs will depend on “how big our appetite is for regulatory changes,” Chalder said.

The regulations don’t consider things like cell phones and people working from home, and the related lack of need for parking, he said, illustrating that they are out of date.

Plus, “If we can organize ‘like’ provisions together, it’ll make your job and everybody else’s job easy by trying to get everything together as much as you can, to defrag the hard drive,” Chalder said. “We’re going to be looking at opportunities to add graphics into the regulations to explain concepts,” such as floodplains and impervious surfaces.

“We’re going to organize, clarify and update standards and regulations related to signage and park landscaping, outdoor lighting … and other things that will help you under quickly what it is you can do or do as part of the development proposal,” Chalder said. “…We’re going to try to write the regulation to the current regulations be written simply. So we get rid of multi-syllable words …finding simple words to explain the concepts, address the concerns that are expressed here, through my meetings and discussions with others, and try to create a set of regulations again to guide Norwalk for the next 30 years or so.”

When can we have an honest discussion about government defined “affordable housing”?

The government uses the noble cause of providing “affordable housing” to control the process and enrich their cronies.

Government sponsored affordable housing is anything but affordable to build.

The system is rigged!

It is not set up to best help the people who need it.

So many people and organizations benefit and thrive off the current dishonest system that it will be very hard to change/improve.

The 1st step is to have an honest discussion and also clearly define what we mean by the catch all phrase “affordable housing”.

How about we also have an honest discussion about what the real housing need is in this city?

Like, why do we force our developers to squeeze every last bit of profit out of height-limited buildings?

Why are we even TALKING with developers who only build $2700/mo luxury pads, when we have hundreds being exploited in illegal housing?

Why aren’t we building housing that people who actually live and work in this community can afford?